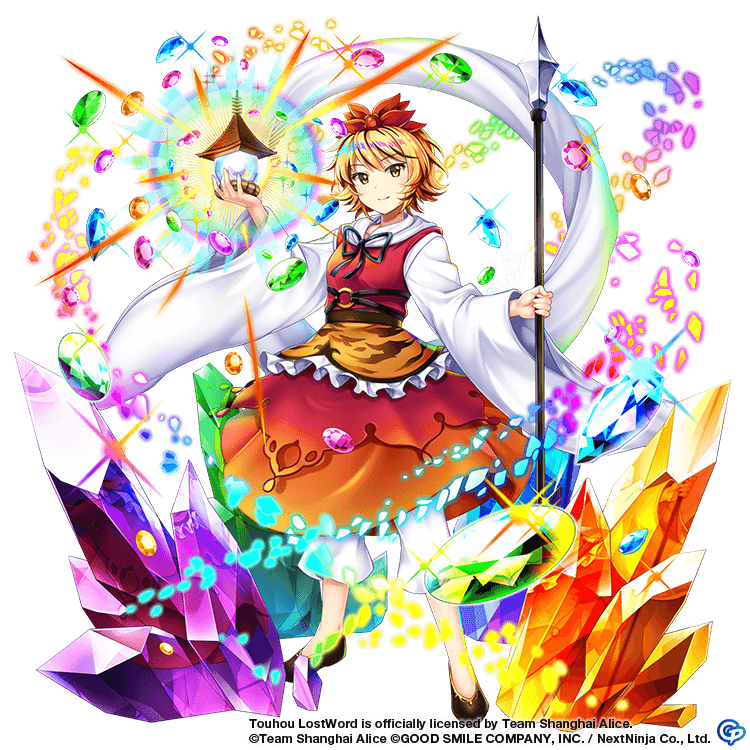 Shou Toramaru's Spread Shot (a Touhou LW original). She unleashes the light of dharma as bullets from her Dokkosho. A Dokkosho is a type of vajra. It is used in rituals, as a weapon, and is considered a valuable treasure. It can dispel bad thoughts and smite enemies of the Buddhist faith.
Tiger Tamer

Shou Toramaru's Focus Shot (a Touhou LW original). Her bullets take the form of tiger cubs and assault the enemy. It appears that tigers may have been an important symbol in the mountains that Shou originates from. Or perhaps the temple that she served at in the outside world. This symbolism was probably of the tiger from the Chinese Zodiac, which denotes the east rather than the animal itself since there are so few tiger youkai in Japan. The regional cultures that worshipped her as a symbol of their faith gave her the name and form that she still retains today. 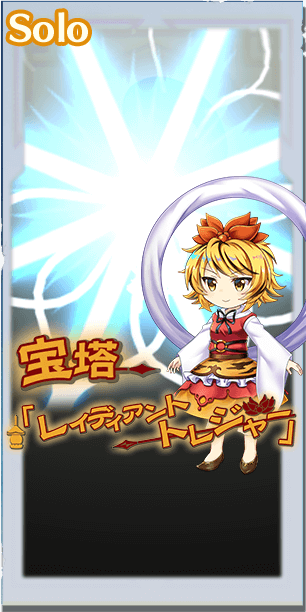 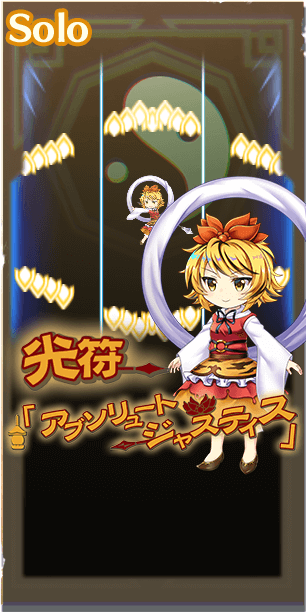 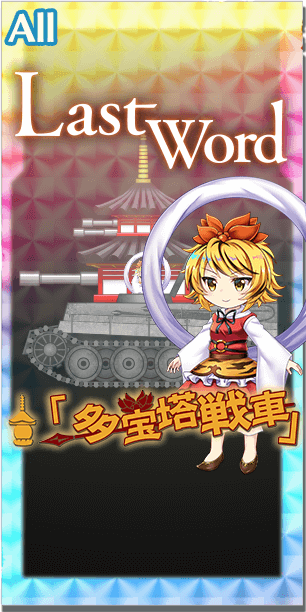 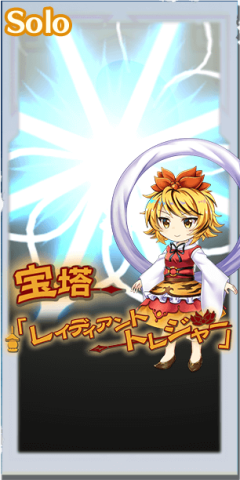 Shou Toramaru's Spell Card. Her pagoda unleashes a barrage of light. A pagoda is a kind of Buddhist tower that may be based on the idea of the sun climbing high in the sky. Shou's pagoda can fire light as brilliant as any shining jewel. Anything hit by said light will become a jewel—wonderful, but scary!
*Pre- and Post- effects assume max level. Effects per level can be viewed here.
Pre-Attack Spell Card Effects 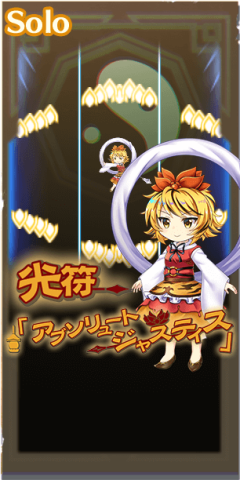 Shou Toramaru's Spell Card. She fires the absolute light of justice that looks like an amidakuji (a lottery in which you connect lines between a lattice pattern to determine a winner). It also resembles the pattern of the halo behind the Amitabaha buddha, known as Amidanyorai in Japan, which is where the amidakuji may trace its origin. Like the sun's rays, this Spell Card shines light down on Earth.
*Pre- and Post- effects assume max level. Effects per level can be viewed here.
Pre-Attack Spell Card Effects 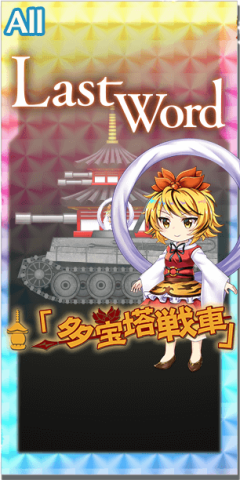 Shou Toramaru's Last Word (a Touhou LW original). A tank laden with a two-story pagoda launches an all-out assault on the enemy. While it does represent an astounding amount of force, it also follows the Buddhist teaching of ''protecting ideologies through force when necessary.'' This may appear to go against the idea of not harming others, but justice cannot be served without power to back it up, much like a country protecting itself with armed forces. It is the same mindset that any monk practicing martial arts would need to succeed.
*Pre- and Post- effects assume max level. Effects per level can be viewed here.
Pre-Attack Spell Card Effects

Once, Shou Toramaru, Disciple of Bishamonten, was a vagabond youkai tiger with no purpose in life. Once Byakuren Hijiri took her in and gave her a purpose in life, Shou embraced her newfound path wholeheartedly. Still, in spite of being calm and composed on the surface, with a jeweled pagoda capable of channeling Bishamonten’s powers and a big spear to back it up, she’s not all she seems. There’s a sea of emotion within that tiger, a gluttony and thirst for booze, a lack of physical power to back up the power she borrows from that god, and that spear of hers? Just a glorified walking stick she uses to look important. Yet still, don’t let that fool you into thinking she’s to be under-estimated, she’ll still use her powers as an avatar of Bishamonten and her ability to create gems of all sorts to serve as an A Tier Friend. Just don’t expect her to make any Seal Crystals unfortunately, those don’t count as gemstones.

For farming purposes, Shou is a bit of an odd case in that whilst she has a All targeting Last Word, she’s actually more suited to Solo stages overall. This is due to her Last Word dealing somewhat below “great” damage for an All Last Word, but having a human Killer on it - there aren’t many event stages with 2+ enemies and all humans, but there sure are stages with only 1 human. Just keep in mind she’s not that great at it outside that scenario. If you're okay with taking 2 or more turns to farm, she gets notably better.

In harder fights, Shou is primarily a selfish nuker with a backloaded All targeting Last Word, Pagoda Tank. It actually does a ton of damage in longer fights, and it's not very hard for her to set up either: between Jeweled Pagoda: Radiant Treasure giving her 1 level of Yang ATK UP for 3 Turns (with no Boosts), and getting a bonus Yang ATK UP level each time she Boosts, on top of her skills giving her a total of 4 levels of Yang ATK UP for 2 Turns, she can get set up in just a single turn. Unfortunately, the human Killer whilst nice on paper isn’t as good as you’d hope, as it’s rare for hard fights to have more than 1 or 2 humans on the field - but still nice to have when taking them out right away is a priority. It’s also a tank! This is because of some wordplay - in Japanese, Treasure Pagoda and Turret (as in a vehicle turret) are homophones.

Outside of her strong Last Word, the tiger’s also got P0 access to Sun in her Focus Shot, Tiger Tamer. Combine that with Light Sign: Absolute Justice having an average 1/1/2/3 Sun Breaks for 0/1/2/3 Spirit Power, and she can bright the light of Bishamonten down upon any of your foes to Break them. Unfortunately that’s it for team support.

Overall, Shou's a solid attacker, but that's all she is. Keep that in mind and she'll blast your enemies to the depths of the Narakas (buddhist hells) in no time! Well that or just knock them around silly, this is Gensokyo after-all, even a tank isn’t going to kill anyone.

Shou's priorities are simple: at least 1 Story Card that provides Yang ATK UP to cap out her Yang ATK, then Spirit Power UP for her remaining slots to fuel either her Breaks or her Last Word.

Pick one of Trident  or Prabhutaratna's Pagoda to level up first, as both are equally valuable due to the extra Yang ATK UP. Then, level up the other, and finally level up Dharmapala's Staff  for the extra Spirit Power.

- Selfish attacker
- Backloaded damage makes her not the best at farming anything but humans.