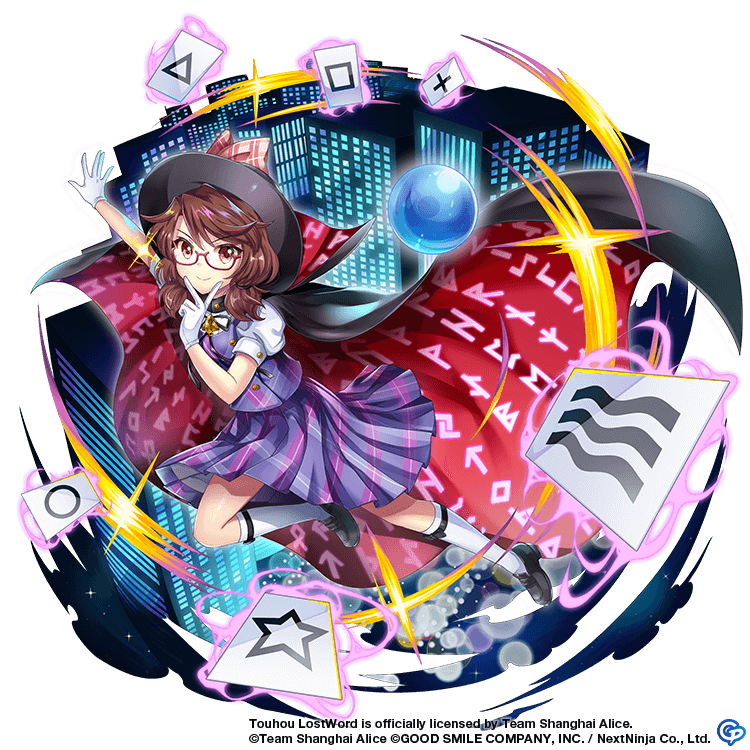 Sumireko Usami's Spread Shot (a Touhou LW original). She throws Zener cards with bioelectricity. This attack is kind of like a railgun because she imbues the cards with kinetic energy. Weak electricity flows within the bodies of all living organisms, and Sumireko can harness this power to create all sorts of electromagnetic phenomena... Or so she says.
Pyrokinesis

Sumireko Usami's Focus Shot (a Touhou LW original). She throws Zener cards imbued with the ability to will fire into existence. Someone with this ability is also known as a firestarter. According to Sumireko, this isn't a particularly special psychic ability if you consider the five elements that make up the human body... But is that true? 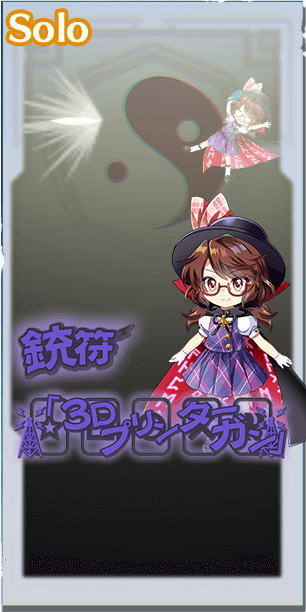 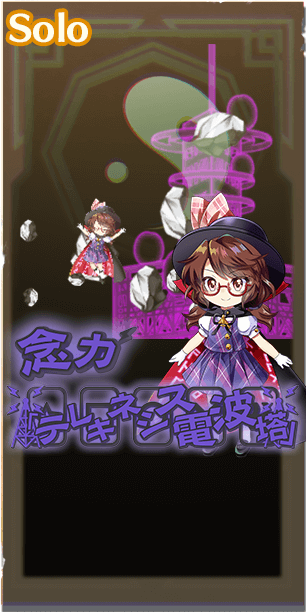 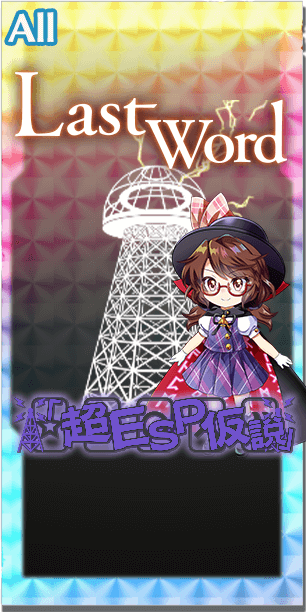 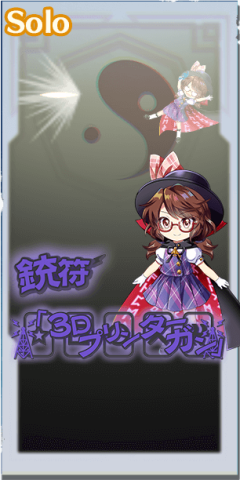 Sumireko Usami's Spell Card. She shoots her gun, which was printed with a 3D printer. Do not copy this! Sumireko probably used her psychic powers to enhance the resolution of this replica. This Spell Card may look simple, but it might be surprisingly effective since most dwellers of Gensokyo have not experienced this particular type of shooting before.
*Pre- and Post- effects assume max level. Effects per level can be viewed here.
Pre-Attack Spell Card Effects 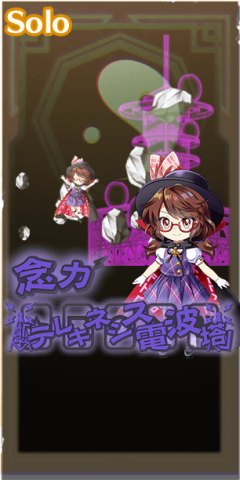 Sumireko Usami's Spell Card. She uses powerful telekinesis to knock down radio towers. Telekinesis is probably the most famous psychic power, and it is like a foundation for all other powers that influence matter. Since Sumireko interferes with physics in this attack, she might be manipulating an unknown type of energy. However, youkai and phantoms are a common sight in Gensokyo, so this phenomenon isn't all that strange to anyone who lives there.
*Pre- and Post- effects assume max level. Effects per level can be viewed here.
Pre-Attack Spell Card Effects 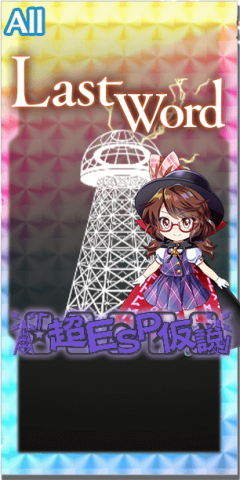 Sumireko Usami's Last Word (a Touhou LW original). She temporarily materializes one of the worlds from her imagination. The Super ESP Hypothesis is the theory that paranormal phenomena (phenomena caused by beings such as spirits or monsters that surpass human comprehension) can be explained by supposing that psychic powers possessed by humans caused the phenomena. Sumireko has come up with a similar hypothesis after learning more about various supernatural phenomena and her own powers. Of course, she has lots of other theories too. However, she doesn't want to believe that the friends she made in Gensokyo are mere figments of her imagination. That is why Sumireko continues her research.
*Pre- and Post- effects assume max level. Effects per level can be viewed here.
Pre-Attack Spell Card Effects

When using Boost, own Evasion 1 level UP (1 turn).
DMG from effective elements 20% DOWN.

Sumireko Usami is one of the few human characters in Touhou who can fend off youkai with her own abilities, which is fascinating when considering she comes from The Outside World and not Gensokyo.. Unlike Reimu Hakurei’s passed-down yin yang balls or Marisa Kirisame’s magic, she relies on powers from the occult, granting her great psychic abilities. Previously, she managed to utilize Occult Balls to pass through the Great Hakurei Barrier and make her way into Gensokyo. After being ejected and with curiosity getting the better of her, Sumireko began to spread the balls within Gensokyo to form a loop of bringing Gensokyo’s residents to the Outside World, learning more about the area, and then bringing the balls back to Gensokyo to repeat the process. Reimu and Gensokyo’s sages inevitably thwarted her plans, but after the incident Sumireko found out that she could still enter Gensokyo while dreaming. Although this has created quite the complex situation with Dream Self doppelgangers and other dream shenanigans, this has only allowed the first president of the Secret Sealing Club to hone her skills and become a B-Tier Friend in Touhou LostWord.

Sumireko serves up a Yang-only Last Word, Super ESP Hypothesis, to deal her heavy damage. She is able to reach 2P on turn 1 thanks to the 1.00 Spirit Power boost from her second skill, Inspiration, but with her only heavy Yang ATK buffs outside of the 3 levels UP (2T) from Super ESP Hypothesis’s Pre-ATK effects and the extra 3 levels UP (2T) from her third skill, Psionic Assistance, Sumireko lacks many important self-buffs to make her good at farming or pure offense. It doesn’t help that her Gensokyo Killer Bullets are not on the first bullet line of Super ESP Hypothesis, meaning that even buffing CRIT ATK wouldn’t impact her damage when compared to better CRIT-based Friends.

Fortunately, Sumireko has a couple of other niches to give her some usage in challenging fights. Sumireko’s barrier breaking potential isn’t the most impressive but still decent, as she gets 0P Wood off from her Spread Shot, Electrokinesis, as well as 3 Metal breaks with her second spell, Psychonesis: Telekinesis - Radio Tower. Her first spell, Gun Sign: 3D Printer Gun, is pretty underwhelming with 2 Star breaks which require at least 2P to access, but Super ESP Hypothesis is at least decent due to being half-Star/half-Wood. Gun Sign: 3D Printer Gun at least provides 1.00 more Spirit Power, which is extra power for Super ESP Hypothesis. Psychonesis: Telekinesis - Radio Tower is also Sumireko’s main accuracy support, as it decreases one foe’s Evasion by 2 levels, with a 50% chance for an extra level of debuff (2T). Both of these normal spells can also break Blind anomalies at 1P, but without any real way inflict Blind outside of a very small 15% chance with Electrokinesis, this bullet effect will only see action with team synergies, if the Blind anomaly-caster isn’t already able to break the anomaly themselves.

That is all that Sumireko really can do, sadly. Her first skill, Clairvoyance, does raise her Yin ATK by 2 levels (2T), which only goes into her spells’ damage, as Super ESP Hypothesis is Yang-only. Otherwise, it also buffs her Evasion by 2 levels (3T), just like her Boost buffs from being capable of manipulating psychic powers. Evasion is a very niche stat when it comes to battling, especially when using barriers to Graze is always the better way of avoiding any true danger. Still, Sumireko does have somewhat practical debuffs in her kit, and might even be able to let off some heavy damage with the right setup. Don’t underestimate this girl from outside of Gensokyo; she has read up on youkai and isn’t afraid to face them!

Sumireko can always use the bonus Spirit Power from always-useful cards such as Witch of Scarlet Dreams. To give herself a better chance at being a Yang nuke, focus on buffing her Yang ATK, especially with cards such as How Irrational…, which gives a boost to Yang ATK via buffs and even stat sticks. Ordinary Magician is another good high Yang ATK UP, along with some Agility stat sticks for her Slice scaling.

For Sumireko’s Last Word, focusing on the Energy Bullet aspect of the attack will lead to Unknown Barrier Team being by far the best option, as it provides a flat 50% damage buff to the entire attack. An alternative can be Protection of Cerpinus, which is only a 40% buff to the Energy Bullets in the attack, but also gives a 20% boost to any Wood lines, meaning half of the attack will get a 60% boost instead! Additionally, the 2 levels of Agility UP on this card can buff the Slice scaling of the attack.

Getting an early boost to 2P is pretty good for most characters, and Sumireko is no exception, making her second skill, Inspiration, a good skill to prioritize first. Afterwards, her third skill, Psionic Assistance, buffs both the Yang and Slice scaling of her Last Word, making it a good one to go for next. Clairvoyance, Sumireko’s first skill, is unfortunately rather not impressive due to buffing only Evasion and Yin ATK, two stats that barely matter for Sumireko. This one can be skipped over if desired.