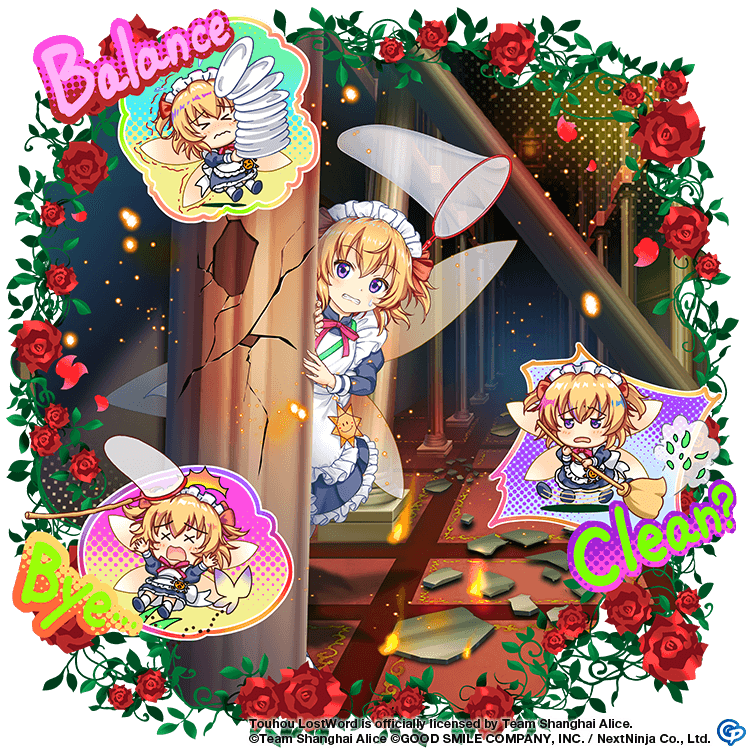 The Spread Shot of Sunny Milk from the world shrouded in scarlet mist (a Touhou LW original). She shoots sunflower bullets which most fairies use. Relatively strong fairies often carry sunflowers. Though maybe they are different flowers that just look a lot like sunflowers. In any case, Sunny Milk's flower is definitely a sunflower. Did you know that fairies are the ones who make sunflowers face the sun?
Sunny Day Collection

The Focus Shot of Sunny Milk from the world shrouded in scarlet mist (a Touhou LW original). She chases down insects wherever they go with this attack. Bug catching is a fun way to enjoy holidays with clear weather. For Sunny Milk, bug catching really is the perfect way to pass the time. It is not unusual for people to wander into a stranger's property when chasing down insects, especially in an idyllic place like Gensokyo. 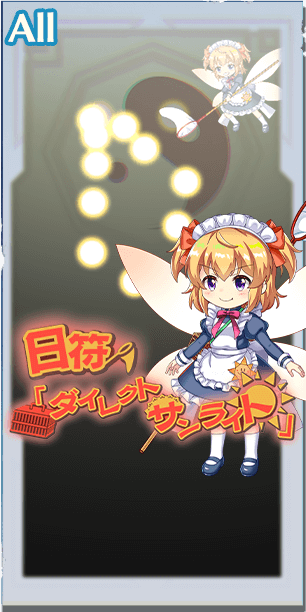 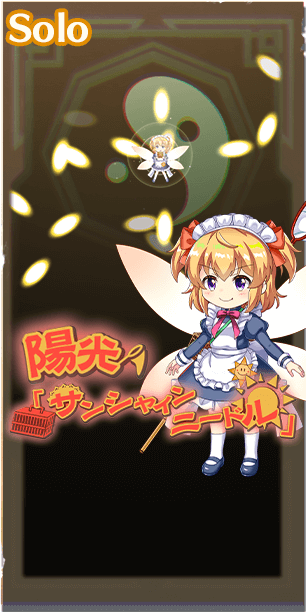 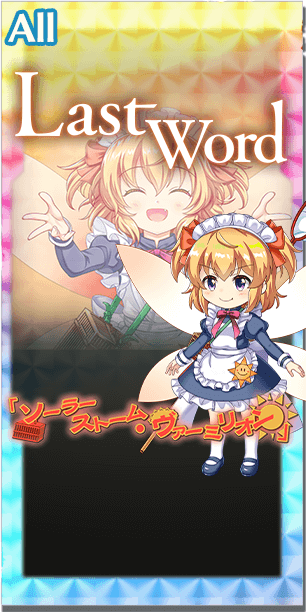 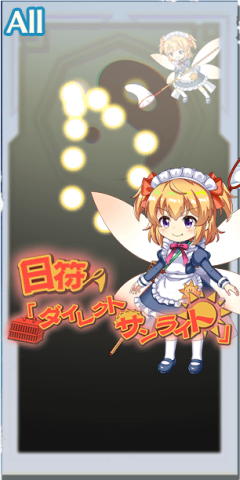 A Spell Card of Sunny Milk from the world shrouded in scarlet mist. She attacks with direct, radiant sunlight. Sunny Milk is the fairy of sunlight. Sunny Milk's power is everlasting as long as the sun rises and sets. Solar power is a renewable energy source, and most life on Earth is made possible by sunlight in the first place. That's how important sunlight is. A little bit of mist could never prevent the sunlight. Everything will be fine as long as the world doesn't get completely shrouded in darkness and the land doesn't sink deep below the ocean... That won't ever happen, will it?
*Pre- and Post- effects assume max level. Effects per level can be viewed here.
Pre-Attack Spell Card Effects 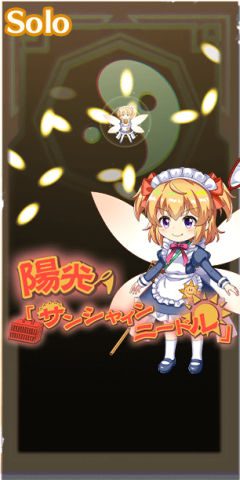 A Spell Card of Sunny Milk from the world shrouded in scarlet mist. She shoots bright sunlight in this attack. Sunlight bullets might be too effective against vampires. Wouldn't they be somewhat annoyed by Sunny Milk manipulating sunlight...? Why do the vampires let this fairy do as she pleases? Maybe... they just didn't realize that Sunny Milk could do this.
*Pre- and Post- effects assume max level. Effects per level can be viewed here.
Pre-Attack Spell Card Effects 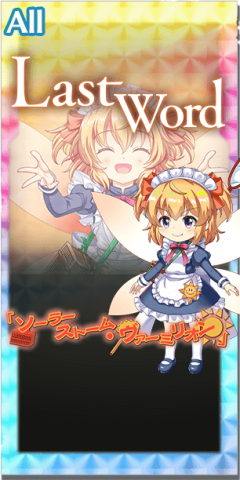 The Last Word of Sunny Milk from the world shrouded in scarlet mist (a Touhou LW original). She tries her best to shoot out sunlight even though the scarlet mist scatters it. While it may only be temporary, this world's natural state has changed to a world filled with scarlet mist, the Scarlet Devil Mansion, and scarlet magic. Since this was natural... the fairies had no choice but to accept these scarlet characteristics into themselves. This was a kind of doping, a so-called phase mutation. Regardless of Sunny Milk's will, her magical power was strengthened. But in her mind, she simply thought that this would let her have more fun with Luna and Star.
*Pre- and Post- effects assume max level. Effects per level can be viewed here.
Pre-Attack Spell Card Effects

As part of the infamous trio of Fairies best known for playing pranks on anyone they can manage to around Gensokyo, Sunny Milk stands out as a bit of a leader type. Bossy and overly confident, fairies like herself are generally considered to be among the weaker spectrum of Gensokyo denizens, who count gods, oni and other impressive characters among their ranks. This variant of Sunny Milk, however, has managed to climb up the tierlist, beating a slew of other worthy opponents to establish her superiority as a very powerful friend indeed.

Let’s talk farming. Sunny Milk easily holds her own with team wide Accuracy Up on her third skill, Light Up, one she can easily maintain with her incredibly low cooldown of 3 Turns. Her second skill, Supplied P Item provides her with Spirit P up while her first skill, Bug-Catching Tools helps decimate enemy team Crit DEF and EVADE by 2 levels each and additional enemy Yang DEF and Crit DEF/EVASION on her various spellcards. Take into account her third passive, Instant Burning which has a 70% chance of reducing a random enemy’s Yang DEF down by 1 level for that bonus touch of extra damage. All these work in concert to give players a supercharged debuffer ready to rock the opposition.

Let’s talk defense. Sunny Milk is very good at blinding her opponents with her majestic brilliance. Both her first skill and her first Spellcard, Sun Sign: Direct Sunlight inflicts 2 stacks of Blind on all enemies, heavily debuffing enemy Accuracy. Further Blind anomalies can also come from her second passive, Intense Sunlight which has a 70% chance of inflicting one stack of Blind on a random enemy. Sunny can further widen this gap with each Boost increasing her Evasion by one level. Not keen on relying on Evasion? Every stack of Blind inflicted on herself increases her Yang/Yin DEF, and Crit DEF/EVADE by 1 level, while every Graze she makes boosts her entire team’s Yang DEF up by 1 level. While somewhat minor, her second Spellcard, Sunlight: Sunshine Needle also restores one of her own barriers, lengthening her survival in the front lines. Her first passive, Total Reflection also has a 30% chance of completely negating any Light damage she takes.

Let’s talk breaks. Sunny is stuffed to the brim with Sun lines, clocking in at 3 Sun on her first Spellcard which does AoE damage, and a whopping 6 Sun on her second Spellcard which does Single Target damage. Her Last Word weaves in some of that sweet, sweet scarlet mist, giving her a total of 2 Fire and 4 Sun on all enemies, an upgrade over her L1 form which used to only hit solo. A sure sign that Scarlet Magic does wonders for fairies! She also has Blind breaks in her kit, allowing her to do so at 2P with her first spellcard, and at 3P on her Last Word. Finally, she has an easily accessible 0P Sun on her Focus Shot, allowing her to whittle away barriers in a pinch.

Finally, let’s talk support, since the fun doesn’t end even after Sunny Milk is done. Her Last Word, Solar Storm Vermillion provides the entire party with 1 Spirit Power; an odd inclusion to be sure until you take into account unique mechanics allowing for the replenishing of Spellcards mid-battle, such as Bomb items and the upcoming Overdamage mechanic. Her second Spellcard will also stun a single enemy at 1P, useful when trying to conserve barriers, while her Last Word guarantees a stun on all enemies at 3P, a niche but still useful trait.

All-in-all, Sunny Milk is a force of nature to be reckoned with, boasting a complete arsenal of offensive and defensive tools to lead her teams to victory. Underestimate this fairy at your own risk.

The Witch of Scarlet Dreams continues to shine as a recommendation, giving her access to the Spirit P she needs to consistently land powerful element and anomaly breaks as well as apply stuns. If you’re looking for more burst damage, Mega Flare works great on her second spellcard for the flat Sun boost which affects all lines. Lunar Capital Stasis Plan supports her Yang domination by debuffing enemy team Yang DEF further, lending to her overall damage

Sunny Milk’s Last Word being comprised of both Yang ATK and Laser bullet makes Ordinary Magician a shoo-in as her Best in Slot. If you are able to maximize her Yang ATK or fully debuff the enemy’s Yang DEF, go with Occult Circle for the additional 15% boost on Laser damage.

Depending on your needs, you can decide between prioritizing either her second skill, Supplied P Item for the Spirit P up or her third skill, Light Up for teamwide Accuracy UP, enemy Yang DEF down and self inflicted Blind barriers to boost her defensive capability. Her first skill, Bug-Catching Tools can come last. Just don’t forget to pick it up for that nifty enemy team Crit DEF and EVASION down!