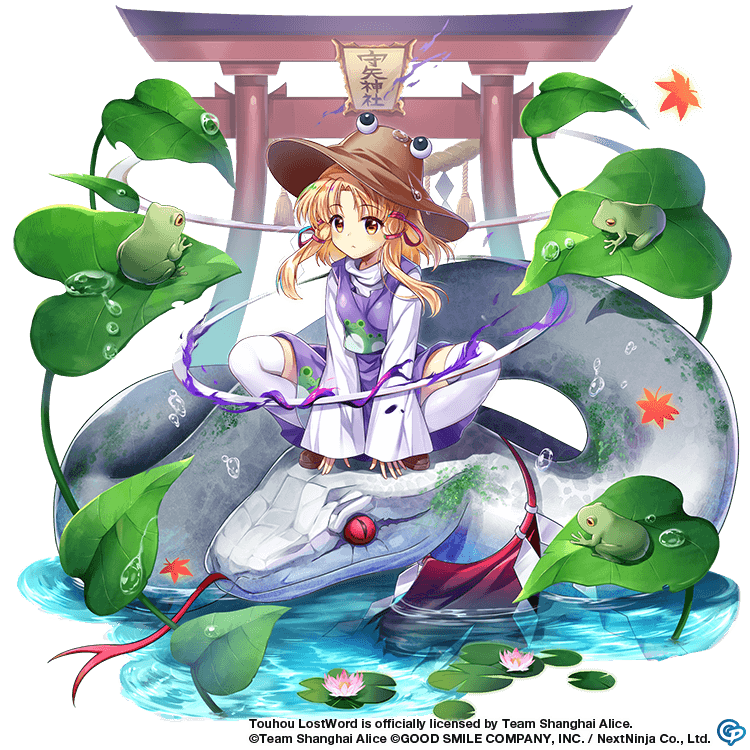 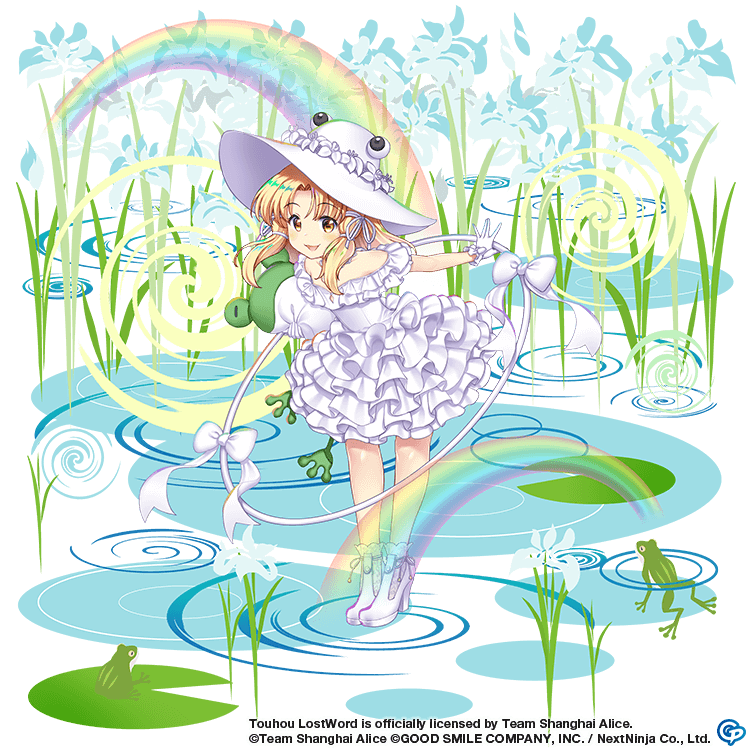 Suwako Moriya's Spread Shot (a Touhou LW original). A simple attack where she shoots out water at high speed. Is Suwako a frog or not? Who knows? In any case, there is no doubt that her divinity, which is probably older than Kanako's, has some connection to flood control.
Frog Stone

Suwako Moriya's Focus Shot (a Touhou LW original). A barrage of earth and stones spout up from the ground. Apparently, a huge stone called a frog stone lies within Moriya Shrine's premises, but it is unclear where it actually is. A phantom stone whose whereabouts are unknown to everyone... Actually, how far do Moriya Shrine's grounds go anyway? 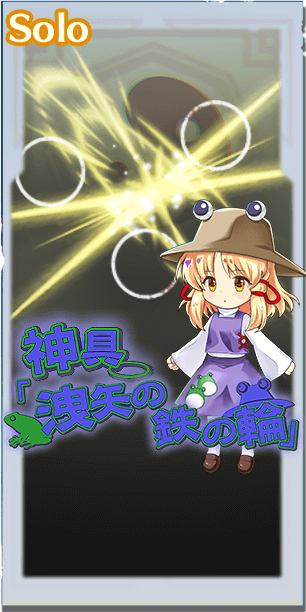 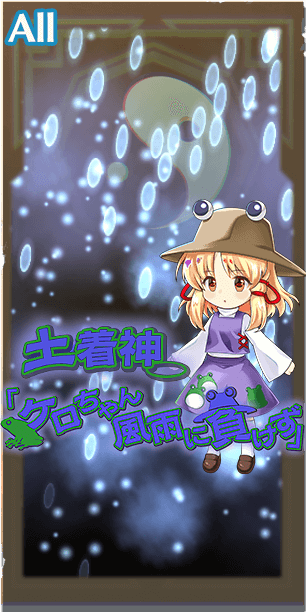 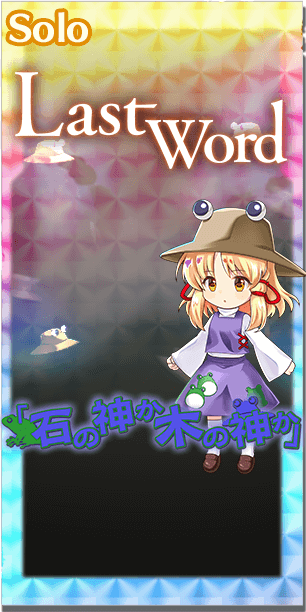 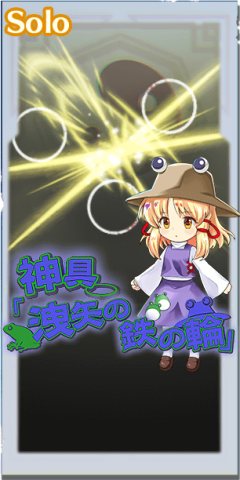 Suwako Moriya's Spell Card. In her attack, she uses an iron ring, her beloved weapon since ancient times. Some say that the iron ring is just what it sounds like: a large ring made out of iron. Others say that it may actually be some kind of blade, while it is described as something like a hula hoop in a certain magic book.
*Pre- and Post- effects assume max level. Effects per level can be viewed here.
Pre-Attack Spell Card Effects
None
Post-Attack Spell Card Effects
None
Native God: Froggy Braves the Wind and Rain 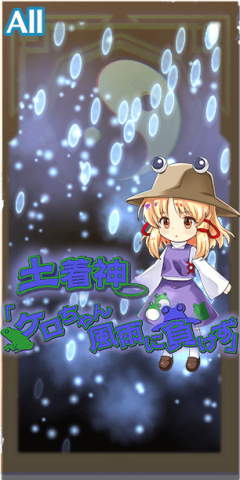 Suwako Moriya's Spell Card. She makes a curtain of bullets fall down like wind and rain. The little froggy―that is, Suwako―won't let the wind and rain win! Historically, Suwako lost to Kanako, the god of wind and rain, but Suwako has always been revered by the local people as a native god.
*Pre- and Post- effects assume max level. Effects per level can be viewed here.
Pre-Attack Spell Card Effects 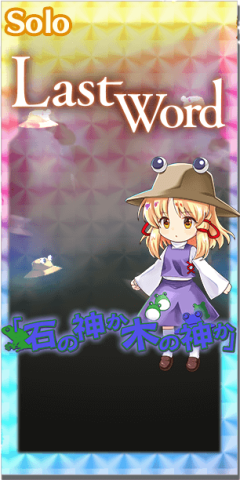 Suwako Moriya's Last Word (a Touhou LW original). This attack strikes with the mystery that is the source of Moriya's faith. There is a theory that the locals living on the mountain worshipped gods by invoking them in rocks and trees, which became the source of their belief. There are many other theories, but it is clear that rocks and trees were considered to be vessels of gods.
*Pre- and Post- effects assume max level. Effects per level can be viewed here.
Pre-Attack Spell Card Effects

Suwako Moriya was released on July 29th, 2021 in Festival: Gods of Sky and Land.

Suwako Moriya is somewhat of a laid back god. Thousands of years ago, some annoying busybody named Kanako Yasaka invaded her lands, only to come crawling back when it turned out she couldn’t fully handle the curse gods which inhabited the land. After that, she struck a deal with Kanako - the annoying interloper would handle getting worshippers and striking deals, which Suwako never had much patience for, and Suwako would just provide the divine services, getting to spend her days being laid back. This was all well and good until humans began to lose faith in gods, leading to Kanako dragging Suwako along to Gensokyo in the events of Mountain of Faith, which led to a chain reaction that shook the land (and by extension, Touhou!) forever. Now, The Highest of Indigenous Gods is here to play with you as a A-Tier Friend - so long as you keep her entertained!

For farming, Suwako is the current standard for one boss stages. Essentially, all other Solo Last Words are judged against hers as a benchmark as a standard, which does not mean she has the most damaging Last Word - simply that she's used as the point other Solo Last Words must meet or beat to be considered 'good'. This will remain the case for quite some time, with notable Human and God Killers keeping her relevant in the future.

For harder fights, Suwako has two jobs - you point her at one target, and that target gets cursed. And also blown up by a billion damage. Her Solo Last Word deals a ton of damage at 3 Spirit Power, which is complimented well by the abundance of Yin ATK Up in her kit, alongside Evasion down against her primary target, plus a reasonable range of Killers in the form of Human and God. If that wasn’t enough for you, her second Spell Card is among the best in the game - it provides 2 Levels of Yin DEF Down for 3 Turns to all targets, an incredible amount of Yin ATK support. It also has an excellent 2 Water and 2 Wood Breaks on an All targeting Spell Card at 3 Power, for when you’re opting to go for Full Breaks instead. She’s also got arguably the cutest sprite in the game!

Suwako does have two notable flaws. Her first Spell Card is kind of rubbish, providing only 1/1/1/2 Metal breaks at 0/1/2/3 Power. Additionally, the backloaded nature of her Last Word means that she needs a turn or two to gather Spirit Power.

Overall though, Suwako’s a fantastic unit - she’s the Pinnacle of Native Gods for a reason!

Generally speaking, since Suwako wants to use Native God: Froggy Braves the Wind and Rain twice before her Last Word to maximize the Yin DEF Down, typically she will get enough Spirit Power and can look to Yin ATK Up instead. If you need her to Break instead, it’s best to go for a Spirit Power providing card, like The Witch of Scarlet Dreams, as she’s rather Spirit Power hungry when providing Break support. For stat sticks, look to cards with Yin ATK.

As Suwako already provides herself with more than enough Accuracy support, anything that provides Levels of Yin ATK Up, such as Overwhelming Firepower, are her best bet. In the case that she already maxes out her Yin ATK up (which is entirely possible when setting her up, as Levels of ATK Up cap at 10!), look to a Story Card which boosts Normal-type bullets, such as Lively Temple Grounds.

Firstly, level up Cursed God to at least level 5, as it's extremely easy to get it that high and the Yin ATK Up doubles at that point. Next, Power From The Sky should be leveled up to 10, as the extra 1 Spirit Power it provides is invaluable for both farming and harder fights. Afterwards, level up Cursed God to level 9. 10 is optional, as it only gains -1 CD at that point, which typically is not very relevant. Lastly, Wisteria of the Tenryuu River can be raised when you have no other priority skill targets, as the additional Level of Evasion Down it provides can occasionally be useful, but it's situational enough that it isn't a priority.