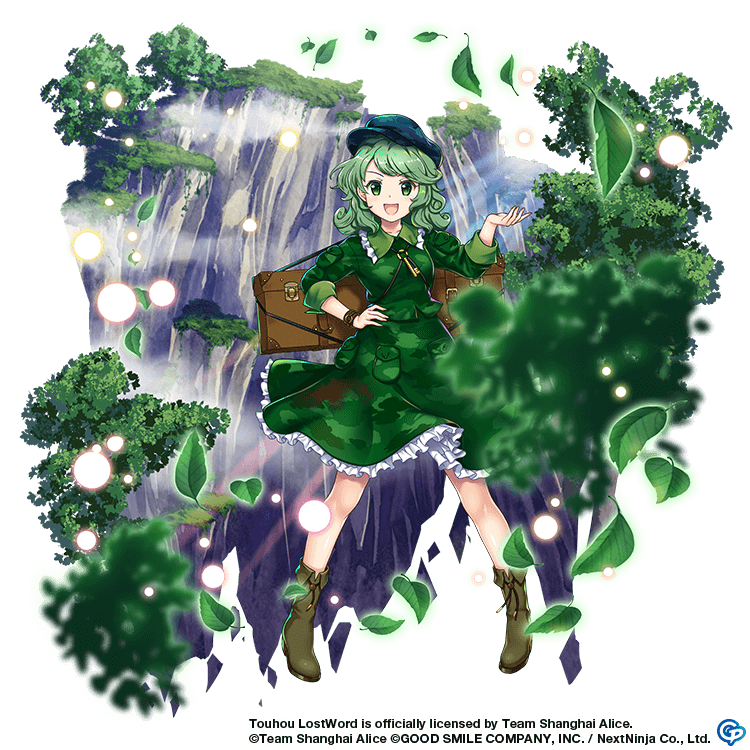 Business Youkai of the Mountain's Recess

Takane Yamashiro's Spread Shot (a Touhou LW original). She attacks by manipulating the qi of the forest. For humans, large forests like those in the mountains are ancient areas where monsters live. That is why the majority of humans used to and continue to live on flat plains. Hills are a boundary.
Leaf Spin

Takane Yamashiro's Focus Shot (a Touhou LW original). She attacks by manipulating tree leaves. The way she makes the leaf-blades dance on the wind resembles the techniques employed by ninja. This is somewhat fitting as ninja have a close relationship with the people who live in the mountains and the concepts of yin, yang, and the Five Phases. 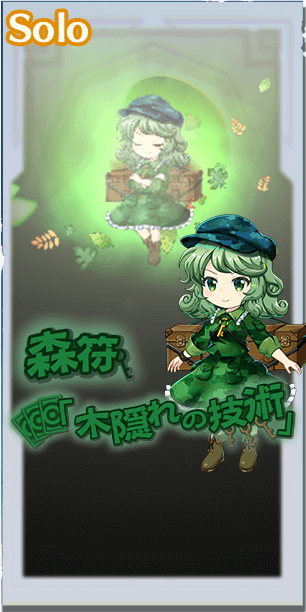 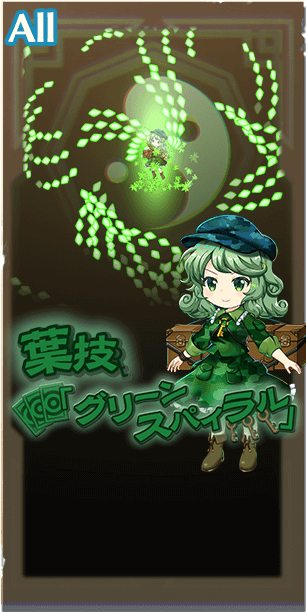 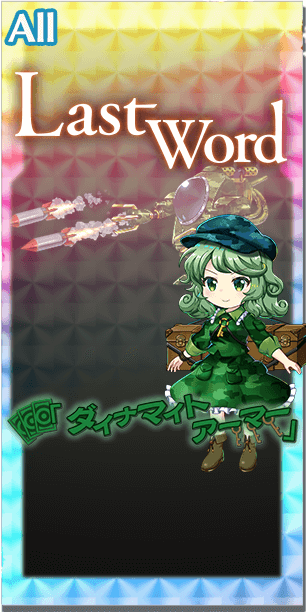 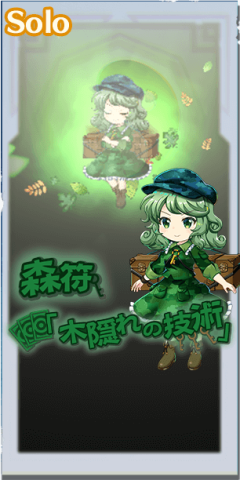 Takane Yamashiro's Spell Card. She shows off the technology possessed by the youkai who live in the mountain's recesses. Yamawaro are youkai that live in the mountains, and just like other mountain-dwelling youkai, they share the aura of danger and terror inherent to the mountain on which they live.

The mountains are home to wild animals, people who oppose those who live in the flatlands, people exiled from the flatlands, criminals, and those whose profession requires that they live there. Beings that possess the magic of oni or the wind may also make their home in the mountains. All of these beings are mysterious, so they could all be youkai.
*Pre- and Post- effects assume max level. Effects per level can be viewed here.
Pre-Attack Spell Card Effects
None
Post-Attack Spell Card Effects
None
Leaf Skill: Green Spiral 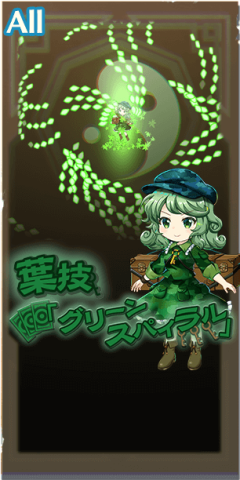 Takane Yamashiro's Spell Card She attacks with a whirlwind of forest qi. Leaves and wind are things of nature composed of qi from the Wood Phase. The deep connection between Wood Phase and the wind is clearly shown by the yin-yang Five Phases creation theory.
*Pre- and Post- effects assume max level. Effects per level can be viewed here.
Pre-Attack Spell Card Effects 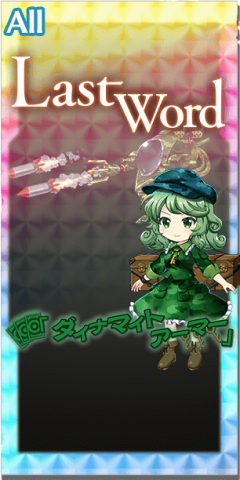 Yamawaro show interest in the technology of humans that is brought into their territory, and they can incorporate this technology into their own culture. Incidentally, the act of charging into the enemy and self-destructing was not one of the intended uses of this machine.
*Pre- and Post- effects assume max level. Effects per level can be viewed here.
Pre-Attack Spell Card Effects

At first glance, Takane Yamashiro may look like your everyday kappa youkai like Nitori Kawashiro, but you would be very far from the truth. Rather than making their home in rivers like Nitori’s kappa group, Takane and her yamawaro tribe have migrated from the river and can be found within forests around the Youkai Mountain. Naturally (get it?), Takane manipulates powers of the forest, or “forest qi,” in comparison to Nitori’s manipulation of water. Although she is very different from the river-types, Takane still maintains the kappa’s skills in business and is very protective of their hideout, especially being wary of humans. Bouncing off the train of selling character-themed cards, Takane is an S-Tier dealer in Touhou Lostword.

For raw power, Takane basically comes with the strength that you should expect for 2022 standards. Her Last Word, Dynamite Armor, already starts off strong with an All-target Yang DEF debuff for 2 levels (2T), something both the attack’s Yang-only nature and other Yang nukes can easily take advantage of. Additionally, she can get up to 2P using her third skill, Prospector Lecture, giving her easy immediate damage. Consistency won’t be an issue thanks to her second skill, Military Rations, and its 3 levels of Yang ATK UP and Accuracy UP (3T). Topped off with Human-killers within Dynamite Armor, Takane is an easy and accessible Friend to set up.

Outside of the damage, Takane has a combination of good ally buffs and some decent barrier breaks. The Yang DEF DOWN from Dynamite Armor was mentioned before, but her first skill, Anti-Kappa Fence, also provides 3 levels of CRIT DEF DOWN (2T) on all foes to make any critical hits via CRIT Accuracy buffs or Killers even more effective. For direct partywide buffs, Takane can use her second spell, Leaf Skill: Green Spiral, to increase all allies’ CRIT ATK by 2 levels (3T). Especially with how long all of these buffs, both on herself and on the party, Takane can be a very practical support Friend for longer battles.

When it comes to breaking, Takane mainly shines in elements but has a niche in anomalies as well. Something rather amazing for a General Friend is how Takane has elements on all of her spell cards’ bullet lines, and unlike other Friends who use that to fill their spells with many random elements, Takane knows where to draw the line with Wood and Metal. Both Leaf Skill: Green Spiral and Dynamite Armor come with an even 3 Wood and 3 Metal, while her first spell, Forest Sign: Tree-Veiling Technology, goes for 4 Wood and 2 Metal. Wood is ultimately her better element thanks to a 0P Wood Focus shot, Leaf Spin, but Takane is definitely not the worst option for Metal breaking. Her basic shots have more breaking practicality thanks to their Discharge bullets at 1P, breaking any Paralyze anomalies on foes (since both are All-target). Takane can use Skill 1 to apply 2 layers of Paralyze on all foes, but otherwise she cannot really apply much Paralyze herself. Her ability to manipulate forest qi allows her to inflict any Freeze, Paralyze, or Blind barriers on any foe applying them to her, but this is very situational. She will have to rely on other Friends to fully take advantage of Discharge, but she at least has the option and can slightly take advantage of it herself.

As expected for a business youkai, Takane made sure to weigh all of the options and have as many upsides as possible while limiting the trade-offs. Her own damage can get very high, and she even shares the wealth through Yang ATK and CRIT ATK buffs and enemy defensive debuffs. She can break well in terms of Wood, Metal, and even Paralyze anomalies to give her even more utility. All in all, this kappa is definitely a good addition to many kinds of teams!

Takane’s preferred story cards are pretty similar to many other Friends. The Witch of Scarlet Dreams is your average best pick for Spirit Power UP, but other options work if really needed. Otherwise, buff up Takane’s offensive stats: Ordinary Magician for Yang ATK and Miracle Mallet for CRIT ATK. Stat sticks should likely go into Yang ATK due to Takane’s Yang-only Last Word.

Occult Circle might not be the 50% buff to bullets that other Friends benefit from on some story cards, but she at least gets a good 35% damage increase to her whole Last Word due to being only Missile Bullets.

Takane’s third skill, Prospector Lecture, is an easy pick to prioritize first for that quick 1.00 Spirit Power restoration, allowing Takane to get to 2P right off the bat and get into her spells’ elemental breaks if needed. The 3 levels of CRIT ATK UP help based on the foe as well. Her second skill, Military Rations, should definitely follow behind for its Accuracy support for herself as well as more damage from Yang ATK buffs. It is still worth leveling her first skill, Anti-Kappa Fence, for its amazing 3 levels of CRIT DEF DOWN on all foes, which gives her great teamwide CRIT support, but her other two skills just provide too much to be done later.