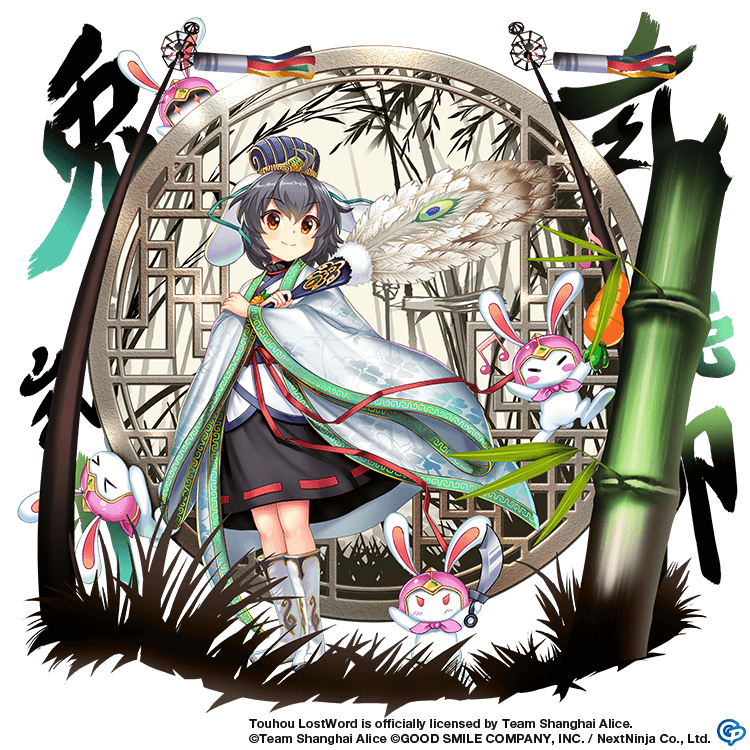 The Spread Shot of Tewi Inaba from the divine hermit world (a Touhou LW original). She attacks with a handy extending-and-contracting staff. She's able to alter its length at will, making it great for measuring the depth of water. Accurate measurements are required to develop infrastructure to control floods, and this is the perfect tool. Indeed, this is a tool and not a weapon. Isn't there a similar staff somewhere...?
Yinglong's Descent

The Focus Shot of Tewi Inaba from the divine hermit world (a Touhou LW original). The dragon Yinglong comes to Tewi's aid and lends her its strength in battle. Differing from most Chinese dragons, Yinglong has bird-like wings. It appears in Chinese mythology as one who helped drain floodwater. 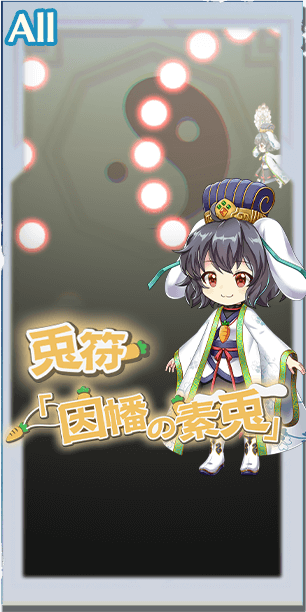 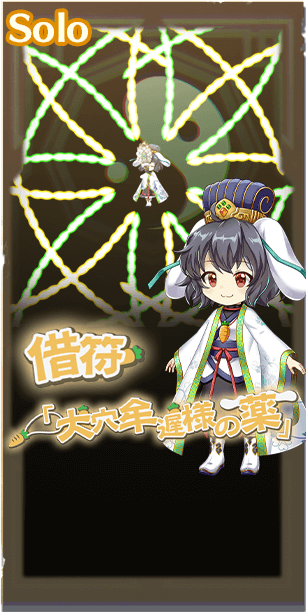 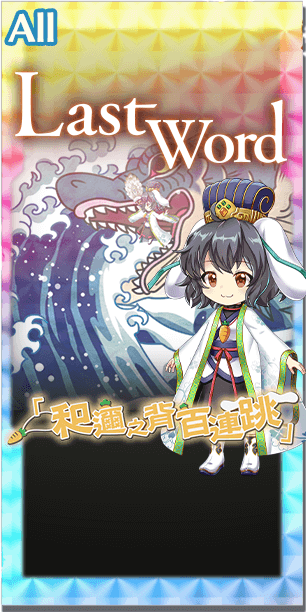 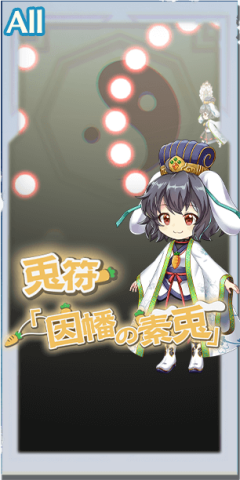 A Spell Card of Tewi Inaba from the divine hermit world. She replicates the mythical white rabbit. The Bare White Rabbit of Inaba (also known as the Hare of Inaba) is a widely-known myth that originates from the tale of Okuninushi (Lord Daikoku). Some believe the titular bare white rabbit isn't white, and the ''bare'' refers to it having been skinned. Lord Daikoku helped the rabbit recover, who, in return, prophesied his joyous fate.
*Pre- and Post- effects assume max level. Effects per level can be viewed here.
Pre-Attack Spell Card Effects 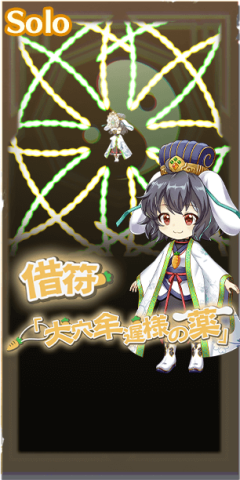 A Spell Card of Tewi Inaba from the divine hermit world. She attacks with Lord Daikoku's healing medicine. Oonamuchi is one of the many names Lord Daikoku is known by. Some believe it is Lord Daikoku's name as a dragon-snake god, hinting at his ties to the lifeforce of snakes and the medicine that healed the rabbit.
*Pre- and Post- effects assume max level. Effects per level can be viewed here.
Pre-Attack Spell Card Effects 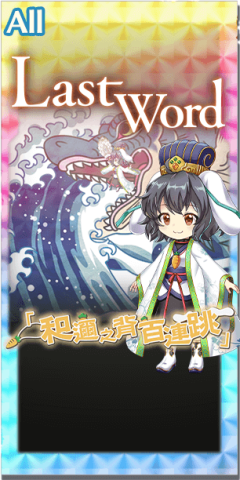 The Last Word of Tewi Inaba from the divine hermit world (a Touhou LW original). She skips across the backs of ferocious sharks. The rabbit of legend tricked a large number of wani (sea creatures that could have been crocodiles or sharks) into forming a bridge, allowing her to cross from the Island of Oki to Inaba. She did so by saying she'd help them find out which wani clan had the most members by counting them as she leaped across their backs. She incurred the ire of the wani but successfully crossed the sea, which led her to meet Lord Daikoku. Fate truly works in mysterious ways.
*Pre- and Post- effects assume max level. Effects per level can be viewed here.
Pre-Attack Spell Card Effects

The Bunny Rebellion Strategist is Tewi Inaba after having taken on all of life’s best opportunities to become the best she can be. The elder Earth Rabbit Youkai with an extreme penchant for pranks exchanges her jokester hat with one more reminiscent of a certain famous Chinese strategist of lore, wielding the depth of her knowledge in pursuit of her goals.

This manifests in a Heal-Class Friend who can remove Barrier statuses, Binds and Debuffs from your party with startling frequency while empowering Yang teams to rain terror upon her enemies. Perhaps in the end, the greatest pranks are those expressed in Damage dealt to the opposing team.

Tewi appreciates Spirit P as much as the next Friend, which makes The Witch of Scarlet Dreams an easy recommendation for her. Mountain of Faith is particularly useful, giving her 2 Spirit P while also increasing her Spell Card damage by 30%. Silver Gale ups her damage output by 45% while simultaneously boosting party Yang DEF 3 levels, useful to further boost survivability while also enabling Yang Hard hitters. Finally, a selfish Tewi could go with Puppeteer and Necromancer for a flat 50% boost to her damage output.

Tewi’s dual Element Last Word means focus on its 100% Body Bullet typing will benefit you most output wise. Beach Sanshoku Geidontei stands at the pinnacle of selection, with 50% damage up while also debuffing enemy Yang DEF by 2 levels. Stand-In Shrine Maiden and Choose An Animal Spirit both provide the standard 50% damage up as well, with the former buffing Cirt ACC and the latter recovering 3 barriers after use. Should your setup require more levels of Yang ATK instead, Kasen’s Senkai provides 3 levels of Yang ATK while increasing Body Bullet damage by 25%

Start off with Skill 1, Meridian Flow to give her an immediate pool of Spirit P to pull from for her multiple tricks hiding behind her bullet lines while unlocking the first of her Bind/Debuff removals and some team healing. Skill 2, Strategic Flow comes next, Providing another team Bind/Debuff removal while also debuffing enemy team Yang DEF and laying Poison on the opposition. Go with Skill 3, Summoning Kishin last for team healing, Anomaly cleansing and some Focus down.

For such a debilitating trickster, Tewi keeps her own team clean, with a 2T cooldown on cleansing team Barrier Anomalies and Healing HP on her 3rd skill. She has multiple other sources of team Healing as well as team Barrier Recovery, allowing her to stretch out battles in her favor as long as she needs.

Enemy teams will buckle under Anomalies

On the other hand, enemies will fall before Poison and Paralysis, while she sweeps up by breaking those in a variety of ways. If you have someone to land Freeze, she can collect that as well, breaking the whole lot through her Last Word.

Somewhat unique to Tewi is her multiple sources of Bind and Debuff Cleansing, split between her Skill 1 and 2. This has a strategic purpose, allowing you to ride out multiple waves of Binds while knocking them all out without having to wait for a Cooldown to end.

Finally, her kit debuffs enemy team Yang DEF and Crit DEF while buffing her own team’s Yang ATK and Agility, making Yang Slicers a perfect match up for the Bunny Strategist.

Tewi’s Accuracy gain is somewhat unorthodox, locked behind her Spell Cards and mostly require Spirit P expenditure to unlock. Keep some Acc support handy in the form of Story Cards or Friends.

Tewi is a good example of a Heal-Class Friend who excels in her specialty, while falling short in others. Her lack of Killers is compounded by her odd spread of Elements, with Wood being the only one tying them all together. Don’t expect Tewi to mop up. That job will fall to her teammates who follow up on her tricks.

With the increasing number of Friends who benefit from Anomalies, Tewi’s doctoring may have less than the desired effect when paired up with the wrong teammates.