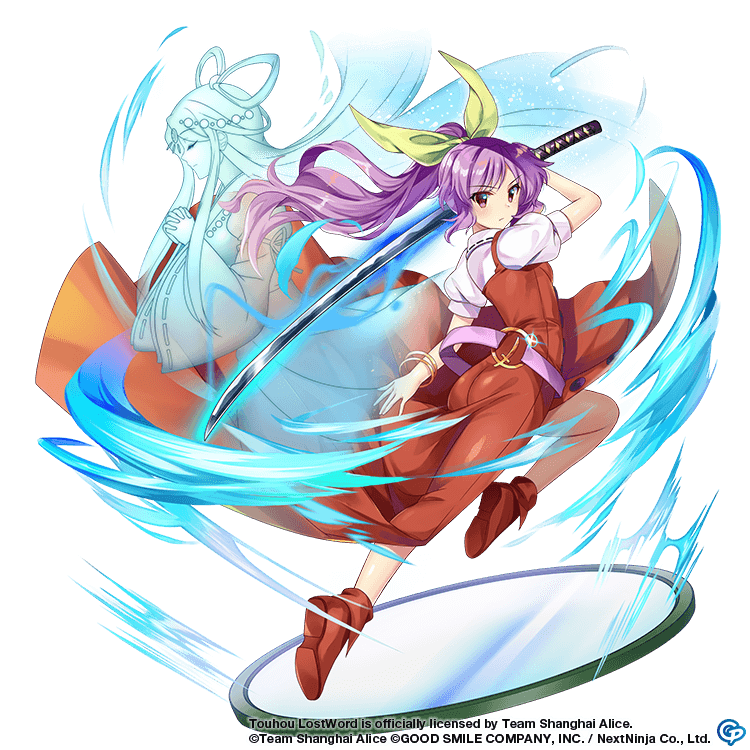 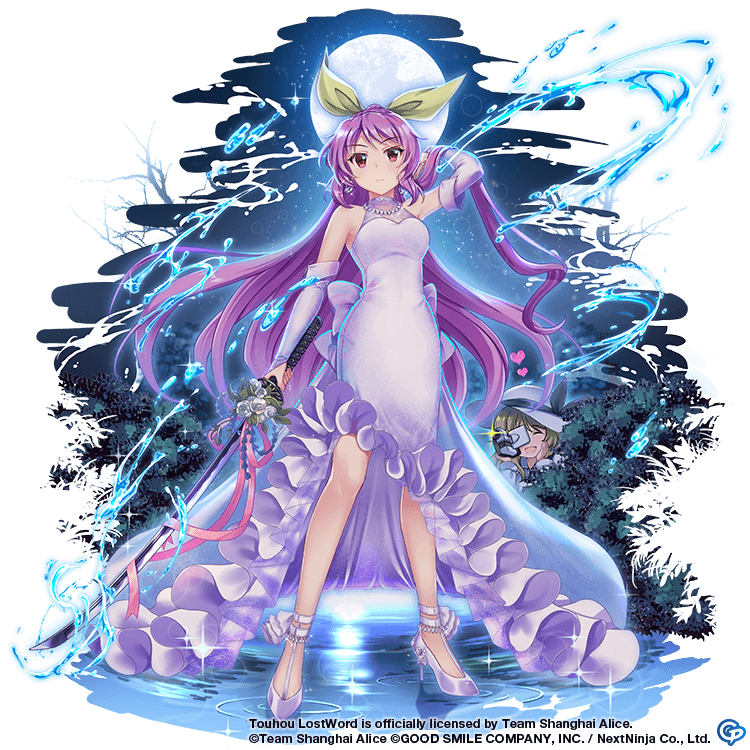 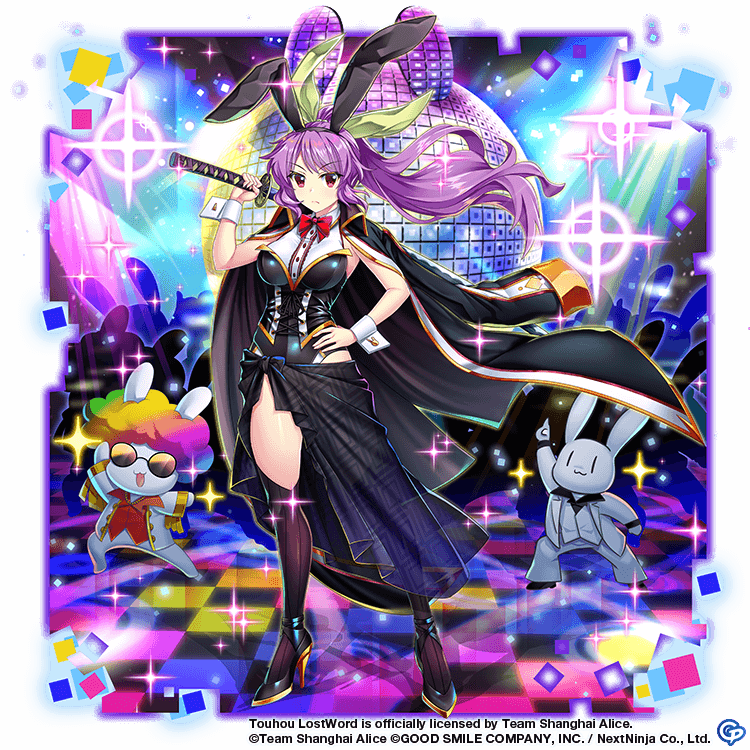 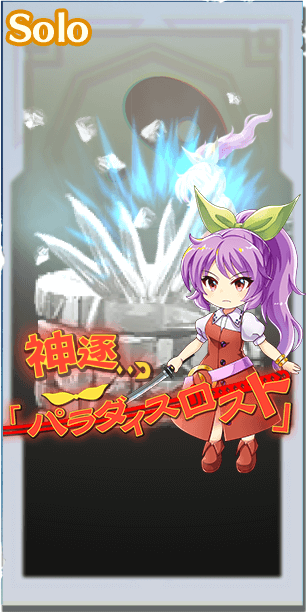 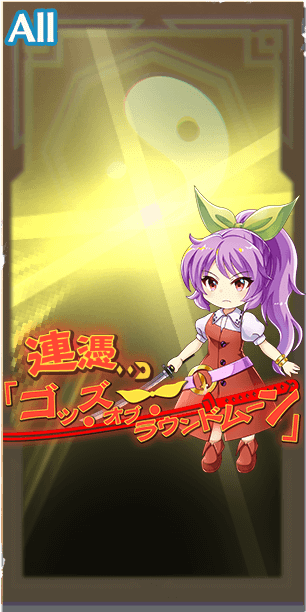 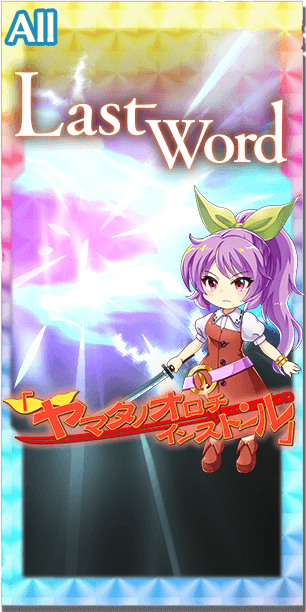 DMG to resisted elements 30% UP.

"But, you know, if we're under suspicion I can't just do as I please like you, my sister... I can't live a carefree life like that."

Watatsuki no Yorihime is a Lunarian princess in charge of the Lunarian Defense Corps, responsible for the training of moon rabbit troops along with her older sister Watatsuki no Toyohime. Yorihime is pretty serious and a bit stubborn to most strangers that come across her and she seems to like to keep a form of dignity about her. However she does have a notable soft spot for her older sister Toyohime whom she worries for deeply when the two are apart. Yorihime is ridiculously a strong fighter and posesses a multitude of crazy abilities that boils down to "summoning the power of the gods". This is similar to Reimu Hakurei's ability to do the same, though unlike Reimu, Yorihime has several years more worth of experience and skill using the power. Yorihime is so good, in fact, that she is able to defeat other powerful beings like Remilia Scarlet and Sakuya Izayoi. In Touhou LostWord Yorihime's overwhelming strength transfers over rather decently, placing her at A+ Tier.

For farming purposes, Yorihime can smite her foes down with divine vengeance, aided by the ATK UP that Divine Banishment: Paradise Lost provides. However, she'll pretty much always need at least two turns to farm anything, and sometimes even three.
Solo Stage Farms: 3-3-3

For more challenging levels however Yorihime shines exceptionally. The Yin support provided from her skills and Last Word along with the speed support provided from her other skills scaling her her slicing will give her a monstrous amount of damage at P3. When paired with the amazing elemental coverage provided from her Last Word, Yorihime makes most challenges a lot easier against enemies you need to take out quickly. For a proper build up of Yorihime, it is advised to use a P boosting Story Card on the first of Yori's Spell Cards, Deity Banishing "Paradise Lost", then using the second of that same Spell Card the turn after, and lastly her Last Word along with her last two Skills.

These strengths at max potential can outweigh the rather glaring Achilles Heel that is her first turn weakness shaping Yorihime up to be a powerhouse of a unit when used correctly.

Her slicing values are as follows:

As Yorihime already has all the Yin ATK UP she needs from her Last Word, look to Crit ATK UP or Spirit Power UP. If she's in a fight where Gensokyo Killer won't enable her to automatically crit, look to Agility UP. For Stat Sticks, get her anything with both Yin ATK and AGI on it, though Yin ATK is preferred.

As Yorihime's Last Word is entirely Body tagged, and she already has Accuracy and Yin ATK in spades, she overwhelmingly prefers Body DMG UP. Whilst Eating Contest is her best option here, Hoshiguma Dish is a solid budget option that's only 3* and thus very easy to MLB.

The order of which to level up Yorihime's skills is fairly self-explanatory. Evil-Slaying Arrow should be leveled first as the raised accuracy and speed can improve her overall damage quite a bit. For similar reasons, Amatsumara's Aid should be the next skill to look towards to help improve the result of her damage like before. Lastly, Ame no Torifune's Aid only provides Yorihime with 0.75P at max level which alone is pretty mediocre. Upgrade this skill if you will, but it isn't a priority over the time it would take to level it all the way.

+Incredible damage when properly set-up
+All Spell Cards are Yin Only, allowing her to do damage outside of her Last Word relatively better than other attackers
+Great elemental coverage on Last Word at P3

Chaldea Boys collection 2023 NA banners
I am trying to get Napoleon and NP3 Ody for next year’s boy’s collection NA. Will they…
Odysseus with Castoria
(topic deleted by author) 1 post - 1 participant Read full…
Is mana loading append skill universally useful? Do I unlock it for all my servants?
It fits quite perfectly for servants with 30% self-charge (like Godjuna). Allows you…
What are the Servant(s) you got in the first free 10 roll. Also what was your first 5*
It’s a question that has been brewing in my head for a while, so here we are. This…
Busti’s Stall Diary Chapter #505: Sus Men ; Dual Rivalry
Time for another chapter and this time, I’ll give honor to the Sus Man and Genius in…
Read More