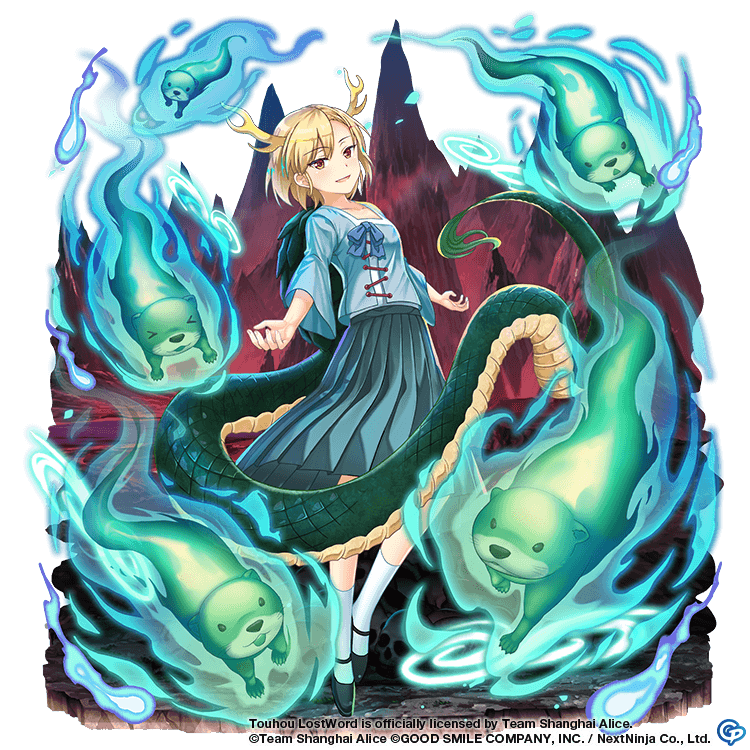 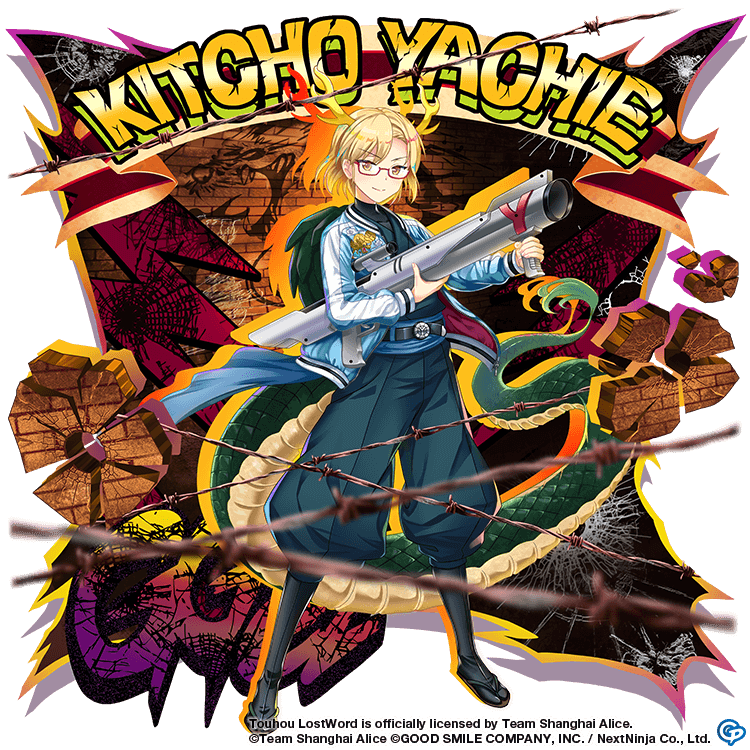 Yachie Kicchou's Spread Shot (a Touhou LW original). In this attack, she creates a shockwave by whipping her tail. Her tail appears to be a dragon tail. It is nearly impossible to assault her from behind.
Spinning Slice

Yachie Kicchou's Focus Shot (a Touhou LW original). In this attack, she shoots bullets and follows up with a ram with her shell. There's nothing you can do if she hides inside her shell while rushing toward you...! What an unfair... yet clever way to attack! 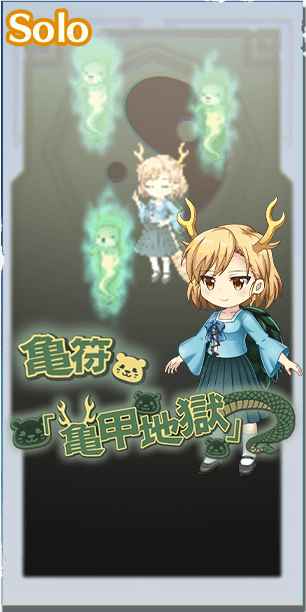 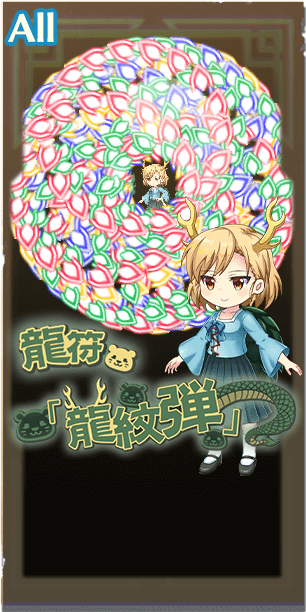 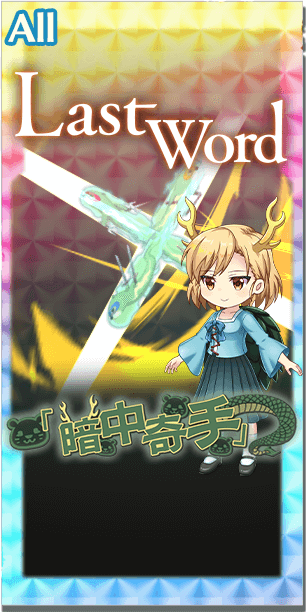 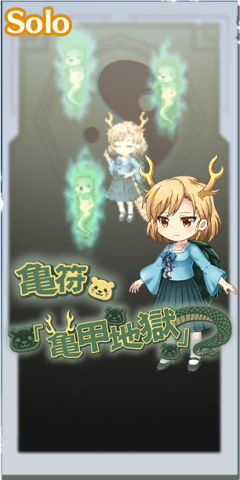 Yachie Kicchou's Spell Card. She shoots lasers in a tortoiseshell pattern in this attack. This Spell Card has become even more powerful with the help of the otter spirits. The tortoiseshell pattern looks like a hard-to-escape net that entangles the enemy. There was an ancient fortune-telling method in Japan called kiboku that used tortoiseshell. The shell was heated, and the fortune was gleaned by analyzing where the shell split. Jidiao, or dragon turtles, might have an affinity with fortune telling because the first character of their name means ''good luck.''
*Pre- and Post- effects assume max level. Effects per level can be viewed here.
Pre-Attack Spell Card Effects 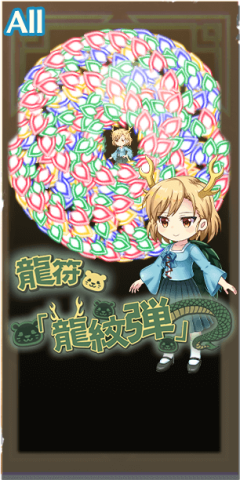 Yachie Kicchou's Spell Card. In this attack, she shoots bullets in patterns that look like dragon crests. The accompanying otter spirits also join in, making this attack more powerful. The spinning, expanding, and contracting circles of the scale bullets look like the figure of a dragon chasing its own tail. Out of the many family crests with dragon motifs, one type depicts a dragon curled around the center, called a ''dragon circle.'' Come to think of it, the design of a dragon serpent eating its own tail has an occult meaning.
*Pre- and Post- effects assume max level. Effects per level can be viewed here.
Pre-Attack Spell Card Effects 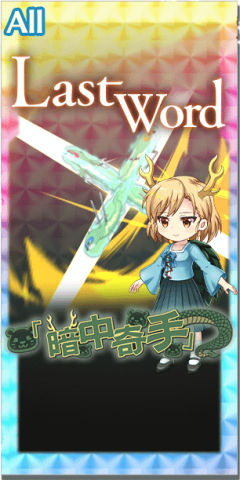 Yachie Kicchou's Last Word (a Touhou LW original). Relentless bullets assault the foe. Four elite otter spirits come together and carry out a highly coordinated plan. This kind of assault and trickery seems to be a common practice of the Kiketsu Family. The mysterious capsule shot at the end of the attack is a hazardous prototype substance of an unknown source. Perhaps they hid it in the sewers beneath the Animal Realm Metropolis.

Yachie Kicchou was released on May 5th, 2022 in Festival: Loyalty vs. Schemes.

Yachie Kicchou is the Matriarch of the Kiketsu Family, and leads the pack of Otter Spirits. She is one of the three Matriarchs, the others being Saki Kurokoma of the Kiega Family, and Yuuma Toutetsu of the Gouyoku Family. Yachie is a Jidiao (Tortoise-Dragon) who is capable of making her opponents lose the will to fight back, which worked to her favor when confronted by Reimu, Marisa and Youmu in the events of Touhou 17: Wily Beast and Weakest Creature. Yachie can also be very deceptive in how she approaches who she may deem as her adversaries, with a respectful exterior, but a stone cold interior. In LostWord, these tactics are used to give Yachie Kicchou the upper hand as she settles as an S+ Tier Friend.

In terms of farming, Yachie doesn’t have many notable story card farms, but she is a very solid choice for farming 2-7-1, with the help of her access to Wood Breaks. While there are many other options to farm this very useful story card, Yachie is another great option for it thanks to being able to do so at 8 Spirit Points, or no Awakening. Her Last Word, Ambush in The Dark, has a full 6 lines of Wood and 6 Lines of Energy, which pairs up well with certain Story Cards.

In a scenario aimed towards more advanced content, Yachie has some adequate team support. She can give her team Agility Buffs via Skill 1 Clever Scheme and her second Spell Card, Dragon Sign: Dragon Crest Bullets. There is more to her support than just that though, as she can give her team some Yin DEF by either activating Skill 2, Dragon Tortoiseshell,  or simply by Grazing, due to being Capable of making people lose the will to fight back, to make opponents lose the will to fight back. As a Technical Unit, Yachie can increase her Yin ATK to further increase her damage output, and increase her Yin DEF and Agility, which are also accounted for in Hard and Slice Scaling in her Spell Cards and Last Word. Yin ATK, alongside Yin DEF, is increased by the Pre-ATK effect of Spell Card 1, Tortoise Sign: Tortoiseshell Hell. Skill 3, Dragon Twin, also increases her Barrier Count by 1, which is actually very convenient considering her ability to increase Yin ATK from grazing, as well as a little more survivability. It is also worth noting that her Last Word, Ambush in The Dark has a Pre-ATK effect that will inflict all enemies with 2 Layers of Burn as well as 2 Layers of Poison, which is a nice little extra way to soften enemies up. If they are not weak to Wood or fully broken, otherwise, her Last Word’s raw power will still seal the deal, thanks to the combination of Wood, Energy, Hard, Slice, Killers and a potentially effective Story Card slot.

In Terms of Spirit Power, Dragon Tortoiseshell provides +1.00 for herself, a comfortable amount to gain. While this isn’t anything special on its own, it’s still helpful nonetheless. In terms of breaking, Her Focus Shot, Spinning Slice has a nice P0 Water Break and has some generally decent access to Wood and Water elements. Both of her Spell Cards have 2 Water and 2 Wood, and while there are still Non-Elemental bullets here and there. The Last Word, Ambush in The Dark is pretty much the highlight of Yachie’s breaking potential, as 6 lines of Wood plays a big factor in terms of what she can do in the elemental breaking department.

Despite not having the best breaks, Yachie can hold her own very well whether it’s as a 2-7-1 farmer or as a Challenge Quest Unit. Her mix of Hard and Slice is a handy damage booster and her Killer access is pretty good too, with one of the Killers being Gensokyo (with, you know, a lot of characters living in Gensokyo). Her Yin DEF stat is surprisingly high as well, contributing to both Hard Scaling and potentially tanking any Yin-based enemies. This concoction of traits in Yachie’s arsenal makes sense for a Technical Role. Yachie definitely solidifies her position as a Matriarch and as a leader of the Otters.

The secondary effects and scaling for Yachie’s attacks are as follows:

You can never go wrong with extra Spirit Power, whether it be the farmable Witch of Scarlet Dreams’ +2.00 Spirit Power with a slight Agility Stat Stick, or Midnight Tea’s +1.50 Spirit Power with a serviceable Yin ATK Stat Stick. A Yin ATK Booster such as Boo! is a very handy card for setting up if necessary, however, since it is possible you may reach the +10 cap, this may be less mandatory compared to Spirit Power Boosting.

Protection of Cerpinus is definitely Yachie’s best bet for her LW. Perfect due to her 6 lines of both Wood and Energy, which can get boosted by 40% and 20% respectively. If that wasn’t enough, it also boosts Agility by 2 Stages for 3 Turns, making Yachie’s Slice Scaling even more effective. For alternatives, Thunder Beat is a solid choice, also boosting both Wood and Energy.

Skill 2, Dragon Tortoiseshell, is the recommended level up pick first, due to Yin DEF given to all allies and Yachie’s own Spirit Power increase from 0.50 to 1.00. Depending on the situation, this helps a lot when it comes to her LW, as it is 1-3-1. Next up could go either way between the other 2, but her first skill, Clever Scheme, is recommended next for its own Accuracy boost. That alone is very valuable to ensure consistency on attacks, but it also grants teamwide buffs as a nice little extra perk. Lastly, her third skill, Dragon Twin, is also a very solid skill to level up for Yachie’s own Yin ATK and Yin DEF, although it falls a bit short compared to the other skills.