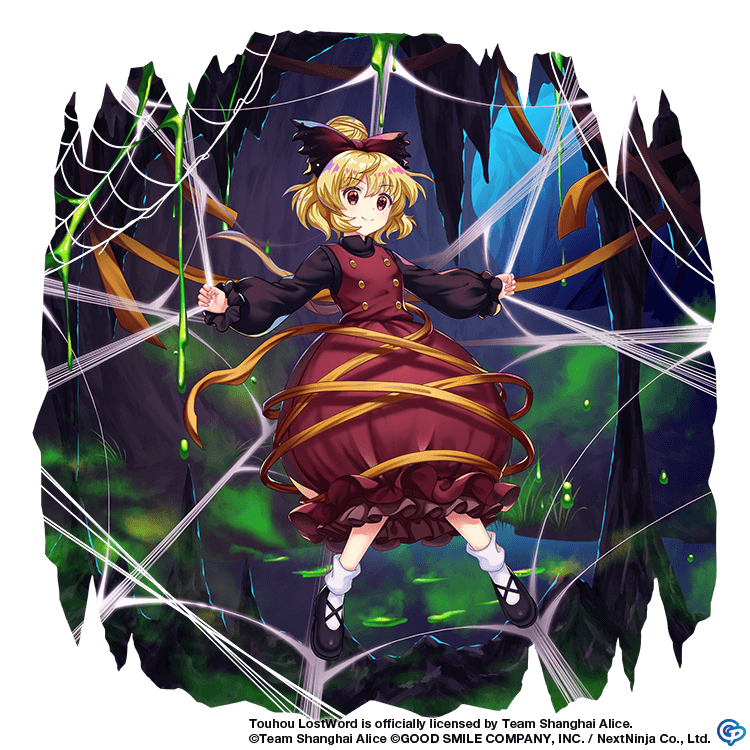 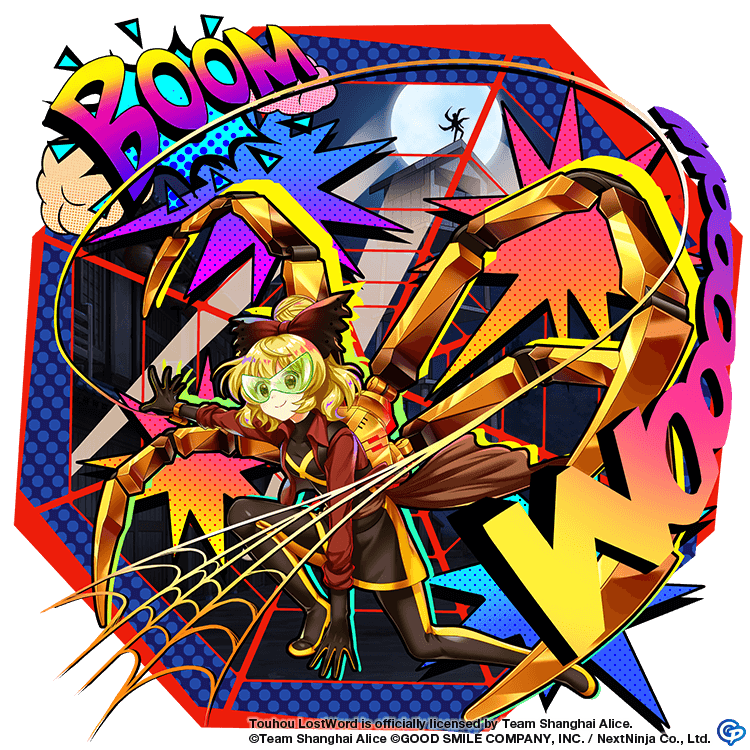 The Bright Net in the Dark Cave
Envoy From the Underworld

Yamame Kurodani's Spread Shot (a Touhou LW original). In this attack, she shoots spider threads rolled into balls. All spiders can produce threads, and many use viscous threads for predation. You might get eaten.
Spider Swing

Yamame Kurodani's Focus Shot (a Touhou LW original). In this attack, she charges toward her enemy by swinging on her spider thread. A similar acrobatic trick is said to be used in circuses called the trapeze. It is a highlight of any circus show. 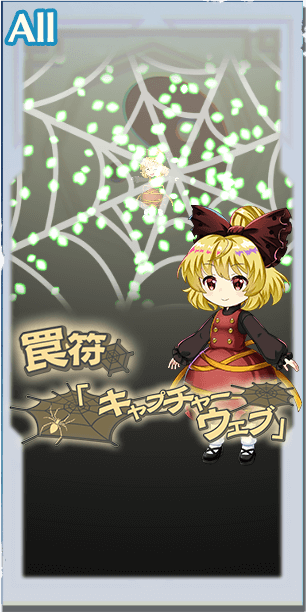 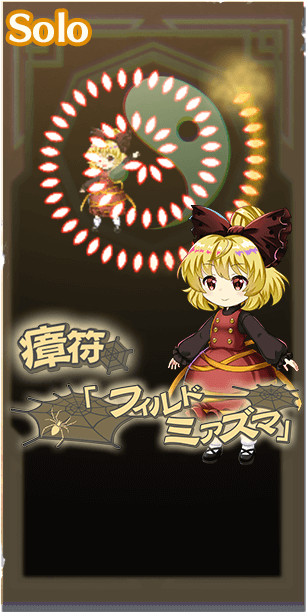 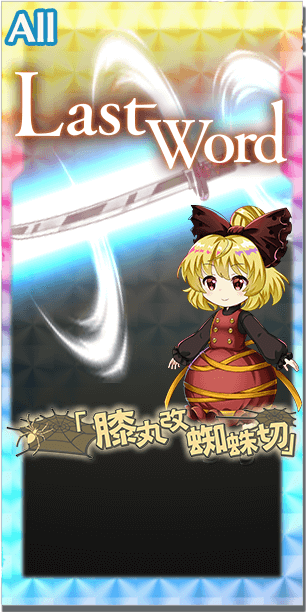 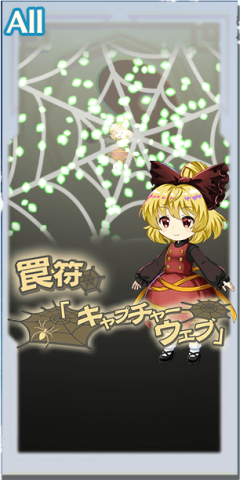 Yamame Kurodani's Spell Card. In this attack, she spreads her web. The way she crafts a web pattern with her threads is truly reminiscent of a spider. Spiders are said to detect prey by the vibration of their threads. It's almost like a wire trap...!
*Pre- and Post- effects assume max level. Effects per level can be viewed here.
Pre-Attack Spell Card Effects 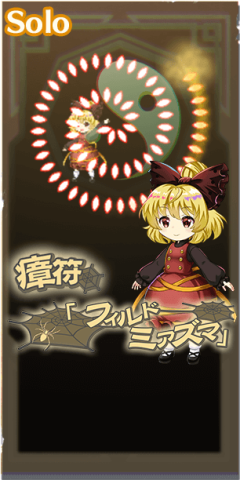 Yamame Kurodani's Spell Card. She imitates a miasma in this attack. Long ago, it was thought that diseases were caused by ''bad air,'' called miasma. Malaria is one of the world's three major infectious diseases, and its name also means ''bad air.'' A certain warlord was infected by a disease called okori by a tsuchigumo, but there is a theory that this was, in fact, malaria.
*Pre- and Post- effects assume max level. Effects per level can be viewed here.
Pre-Attack Spell Card Effects 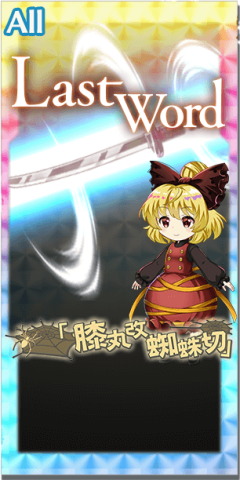 Yamame Kurodani's Last Word (a Touhou LW original). This attack recreates the legendary sword that is said to have slain a spider spirit. The spider spirit, called a tsuchigumo or yamagumo, is a well-known youkai that has been depicted in various stories and plays, including Noh plays. It is said that the sword used to slay the spider was renamed Kumogiri by a warlord famous for exterminating youkai.
*Pre- and Post- effects assume max level. Effects per level can be viewed here.
Pre-Attack Spell Card Effects

When inflicted by Barrier Status: Poison, inflicts the same Barrier Status to target.
When using Graze, own Agility 1 level UP (1 turn).

Yamame Kurodani is a tsuchigumo (土蜘蛛), an earth spider that first appeared in Touhou 11 Subterranean Animism as a Stage 1 Boss. She’s liked by other youkai but humans fear her. These spiders live mostly in the underworld, additionally they are strong, skilled, and good with architecture. Alongside that and a love for battle, Yamame has the potent ability to control illness, especially infectious disease. Although she doesn’t use this power much, she still climbs the spider’s thread to be an S tier Friend.

Yamame’s kit is simple but deadly. Focused on dealing damage, her skills only support her for the most part, she isn’t much of a team player but she misses the part where that’s her problem. Support String supports her team via Agility (2 levels, 3T) alongside a self spirit power regen (+1.00), Construction buffs her own Yin ATK (3 levels, 2T) and Evasion (3 levels 3T), and her first skill, Multi-legged, buffs her Agility (2 levels, 3T) and Evasion (2 levels, 3T). These evasion buffs could be used to clutch some games and escape death but what’s really great here is how her Shots and Spell Cards are mostly Yin and her LW is full Yin, in addition to being frontloaded, making her +1.00p gain really all you need in most cases. Couple that with all the Slice scaling she has and voila! Her skills perfectly boost her damage with some added evasion on top.

As an earth spider, of course she’d have amazing access to the Earth element, equipped with a 0p Earth spammable Focus Shot, she might as well put dirt in her opponents’ eyes. Now for her Spell Cards, Trap Sign: Capture Web, which is front loaded with a 3-1-1 layout and All targeting, plays the role of a minor party buff as it reduces the evasion of all targets by 3 levels for 3 Turns, supporting accuracy team-wide. Although this Spell Card contains Earth breaks, 2 out of 3 of them are at the 2p and 3p bullet lines. This is one of the things her 2nd Spell Card, Miasma Sign: Filled Miasma, differs in. It is a Solo targeting with a front loaded 3-1-1 layout yet again but all 3 Earth lines are at the 1p mark and it also comes with a defensive effect; lowering the opponent’s Accuracy by 3 levels for 3 turns. It is clear that Yamame’s spider senses let her evade danger. Do keep note that both of her Spell Cards break Poison Anomalies at 3p, which is very expensive considering she has no way to apply the anomaly other than reflecting it if she was attacked by it.

If you thought Yamame had spun her last web, think again! We still need to go over her Last Word, Hizamaru Spider Slash, All targeting and less frontloaded than her Spell Cards with a 2-2-1 layout, with a Pre-attack effect consisting of augmenting her Yin ATK  and Agility by 2 Levels for 3 turns. This makes her a perfect candidate against any enemy that is weak to Earth.

When it comes to farming, Yamame comfortably farms 3-3-3 and 3-18-3. Which is kind of ironic considering the best Story Card for her LW is 3-3-3’s SC drop, Mysterious Sword Master, as a result of it being all Slash.

All in all, Yamame is an exceptional Earth Breaker General Friend with access to self sufficient Agility buffs, a few poison breaks, a little bit of debuffs, and lots of front loaded damage because of her Slice scaling. If you’re afraid of spiders, I hope this cute and dependable Friend changes your mind.

Yamame's SCs are mostly Yin, so a classic Yin ATK buff like Overwhelming Firepower or Boo! works well on them. Other than that you can never go wrong with power generation for setups, so The Witch of Scarlet Dreams remains a good option.

As a result of Yamame's LW being full Slash, her top BiS is Mysterious Sword Master. A very accessible and easily farmable card. If you're missing it though, you can go with anything that buffs Earth element Bullets like idola-Deus and Keystone. It'd be subpar but it's still a damage boost.

Support String, her 2nd skill, is the best one to start leveling up to max for the sweet +1.00 SP alongside the tiny party support in the form of +2 Agility. Next up, the 2nd skill to level up is Construction mainly because of the 3 Yin ATK UP, the evasion buff is present but it isn’t the main thing here. Lastly is her first skill, Multi-Legged, as the lowest priority, as it only buffs evasion and agility.