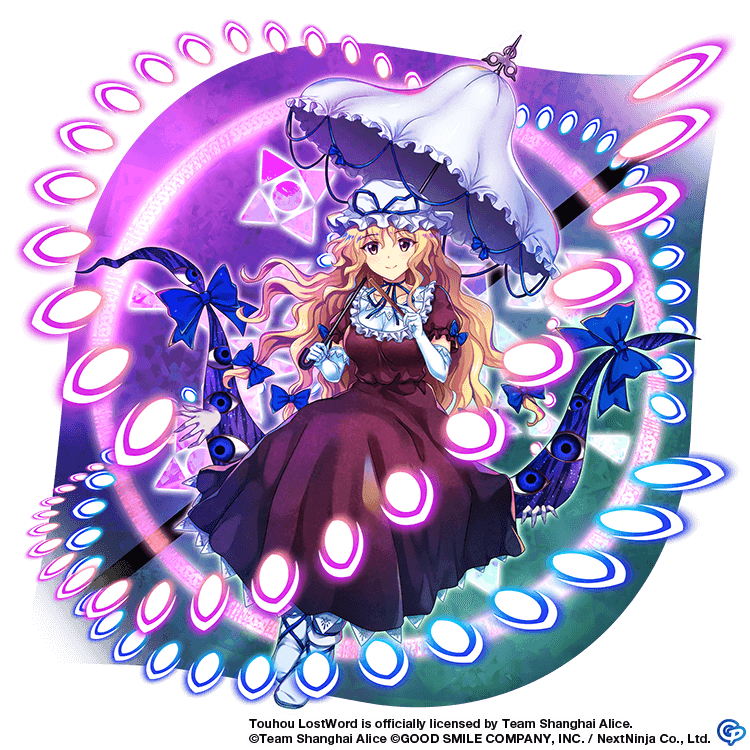 Mastermind Behind Spiriting Away (Cherry Blossom)

Boundary of Winter and Spring

The Spread Shot of Yukari Yakumo from the world with a never-ending winter (a Touhou LW original). She attacks with blue bullets and purple bullets. Originally, there were no distinct boundaries for the yearly cycle of climate variations local to a region. However, that was inconvenient, so people made a calendar that marked four extreme points (the spring equinox, the summer solstice, the autumn equinox, and the winter solstice) and then split the year into four seasons with specific days that marked the start of each season. Spring, summer, autumn, and winter are the four seasons, and they are separated by the last day of one season (in Japan, this day is called setsubun) and the first day of the next.
Boundary of This World and the Netherworld

There is a theory that the custom of stacking stones came about because people wanted to create a boundary between life and death. The weight of the stones would seal the dead who were buried underground. 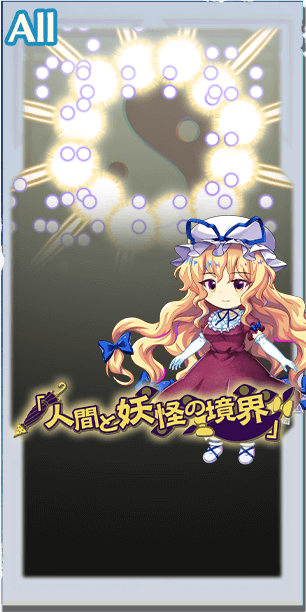 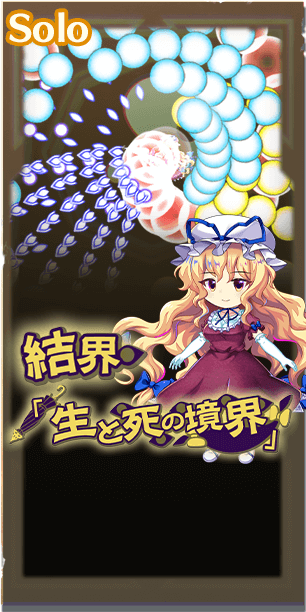 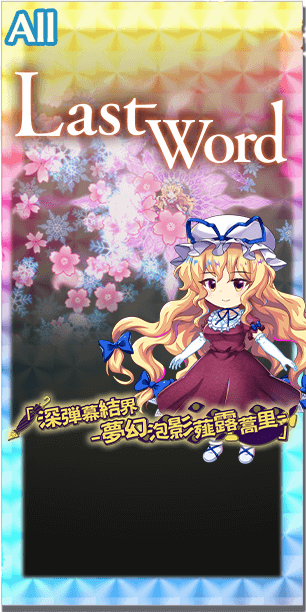 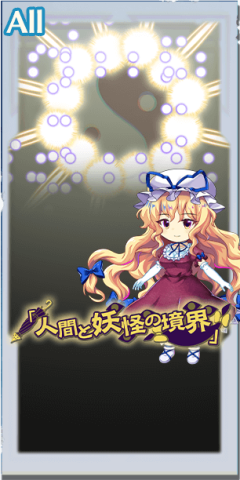 A Spell Card of Yukari Yakumo from the world with a never-ending winter. In this attack, she makes her opponents realize that humans have entered the domain of youkai. During our world's Spring Snow Incident, Yukari informed Reimu of two things. First, the boundary between humans and youkai in Hakugyokurou had become less distinct. Second, Reimu, who had come to the Netherworld, had left the side of humanity. In Gensokyo, the humans and youkai maintain a relationship where they affect each other in important ways, and it is also taboo for a human to become a youkai.
*Pre- and Post- effects assume max level. Effects per level can be viewed here.
Pre-Attack Spell Card Effects 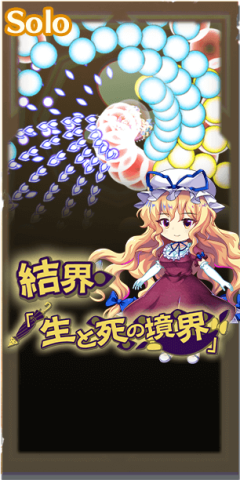 A Spell Card of Yukari Yakumo from the world with a never-ending winter. More bullets are added as time passes in this attack. There are two things that come to mind when talking about standing on the edge of life and death. Yukari's best friend, the ghost Yuyuko Saigyouji and the situation that arises during battles of bullets. In battles of bullets, the combatants brush with danger at every turn until they experience the patterns and understand the route they must take. They are serious battles where life and death are separated by the thinnest of margins, and it is almost like the combatants breathe in sync with one another. You could call them the ultimate game.
*Pre- and Post- effects assume max level. Effects per level can be viewed here.
Pre-Attack Spell Card Effects 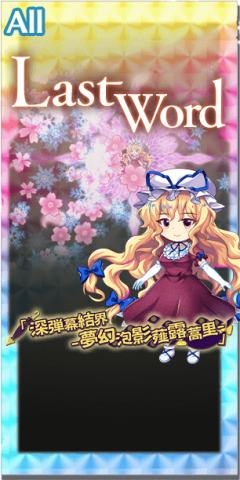 The Last Word of Yukari Yakumo from the world with a never-ending winter (a Touhou LW original). This is the Last Word Yukari prepared for herself during the extended Spring Snow Incident. Apparently, she was planning to use other patterns if the incident was resolved quickly. This attack combines two blizzards that should be fleeting and rarely coincide... The blizzard of snow that covers Gensokyo and the blizzard of petals that decorates the Netherworld. Only a youkai who can manipulate barriers could harmonize them both to create such beauty. This spectacle looks like fantasy, not reality.
*Pre- and Post- effects assume max level. Effects per level can be viewed here.
Pre-Attack Spell Card Effects

A7 Yukari Yakumo was released on May 13th, 2022 in Festival: Perfect Boundary of Hibernation and Sleep.

Yukari Yakumo is one of the strongest, smartest and oldest youkai to exist in Gensokyo, and lacks no recognition for these facts. This powerful persona is cemented by her ability, “to manipulate gaps and boundaries”. This comes in many forms, such as being able to escape any situation, teleport at will, as well as teleport many other things outside of herself. “Manipulate” falls under the ability to create and pass through boundaries. She is one of the Sages of Gensokyo, and the person who originally proposed the Great Hakurei Barrier as well as aided in its creation. In the Spring Snow Incident, she was asked by Yuyuko Saigyouji to repair the border between the Netherworld and Gensokyo, and was accosted by Reimu, Marisa and Sakuya in the process, allowing them all to meet for the first time. As one of the most powerful youkai, she is an S+ Tier Friend.

When it comes down to it, Yukari has 2 major things: tons of element breaks, and tons of damage. She has one of the few Shots in the game with full elements, that being her Spread Shot. Her Focus Shot isn’t too shabby either, with 4 out of 6 lines having elements. And then, of course, all 3 of her Spell Cards have full suites of element lines, making for a truly huge amount of elements, unparalleled by nearly any other Friend. The only caveat to her large elemental density is how varied it is, with her Spread Shot resembling something of Tenshi’s Spell Card 2, with earth/metal/water/wood/fire/earth lines. Her Spell Cards are more focused however, only including 2 or 3 different elements each. This level of variance is usually not a problem in CQ content, as enemies often have an array of elemental weaknesses rather than just one.

As for her viability in CQ content, Yukari shines brightly in basically everything except Elemental EX, due to her elemental variance clashing with the single weakness across each entire stage. Her damage is still quite good regardless, though. But as for everything else, she’s an incredibly versatile Friend who can be slotted into most teams. Her nearly right-down-the-middle split of Yin and Yang bullet lines on every Shot and Spell Card allows for her to benefit equally from Yin and Yang ATK support flexibly. Yukari also has Hard scaling across all of her Spell Cards, allowing her to benefit from Yin and Yang DEF support to further boost her damage. Yukari’s ability to soak up teamwide buffs so well along with applying a good few herself through her Spell Cards and Skills allows her to pair extremely well with someone like Codename: Azusa (B3 Sagume), who applies a large array of teamwide buffs, none of which fall flat on Yukari as they do with many other Friends who majorly focus in on a specific set of buffs like CRIT or Accuracy; not to mention that most Friends are almost entirely focused on either Yin or Yang.

Yukari really does dabble in a little bit of everything, with having every element, making good use of every stat, doing great damage, being a little tanky, and giving a significant amount of self and teamwide buffs. As such, you might say she doesn’t go above and beyond in any particular role, but that’s quite alright in her case; her flexibility makes her a good fill for most teams.

The chances for Yukari’s secondary effects are as follows:

Yukari, like most Friends, appreciates Witch of Scarlet Dreams on her Spell Cards, especially since her self-Spirit Power generation is squarely average with only 1 UP on her 3rd Skill. Otherwise, she can really take advantage of all kinds of stat filler; nothing goes to complete waste on her.

Since Yukari's Last Word is majority Yin, Anniversary at the SDM is the usual blowout card choice just because it's so strong. But if you don't have that max limit broken, Yukari’s Last Word has a large focus on Heavy Bullets, which is great since there is the excellent, easy-to-access farmable card Secret God of the Sky.

First, it’s best to level up Self and Others as 1 Spirit Power UP is just a great universal effect, but it also comes with teamwide Yin ATK UP and Burn infliction. Second is honestly a toss up; Offense and Defense provides 3 effects instead of 2, but Reality and Fiction has teamwide 2 Accuracy UP which is a pretty strong effect, and its cooldown is slightly lower than Offense and Defense.