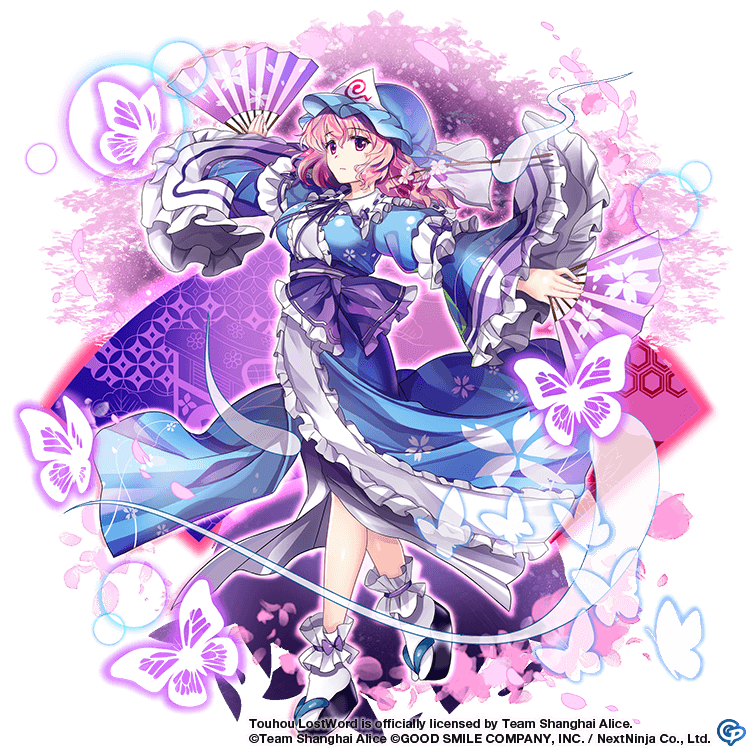 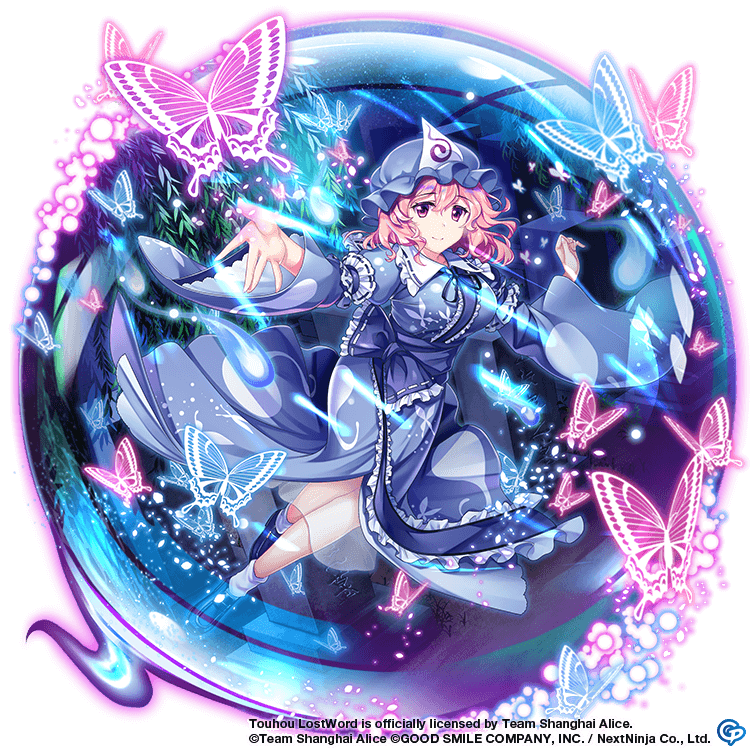 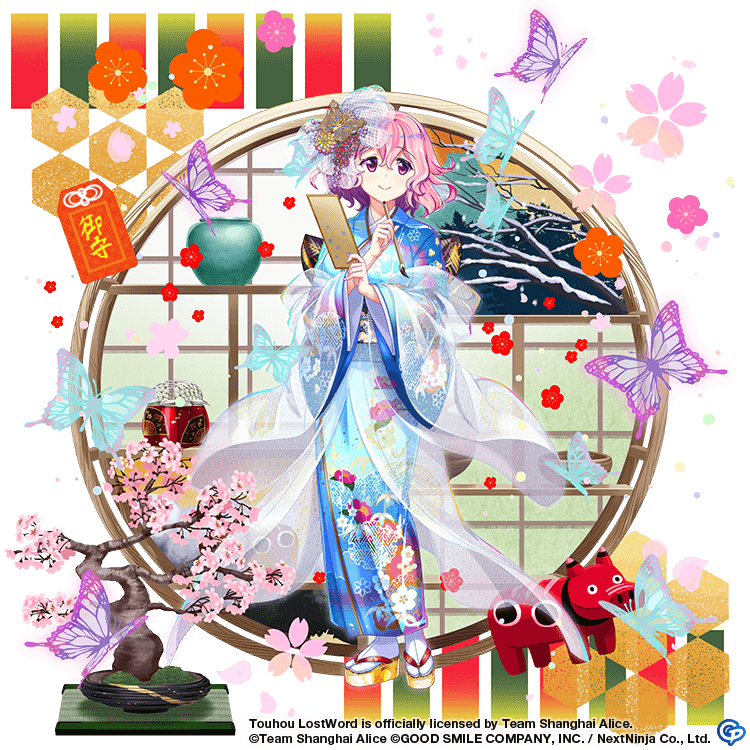 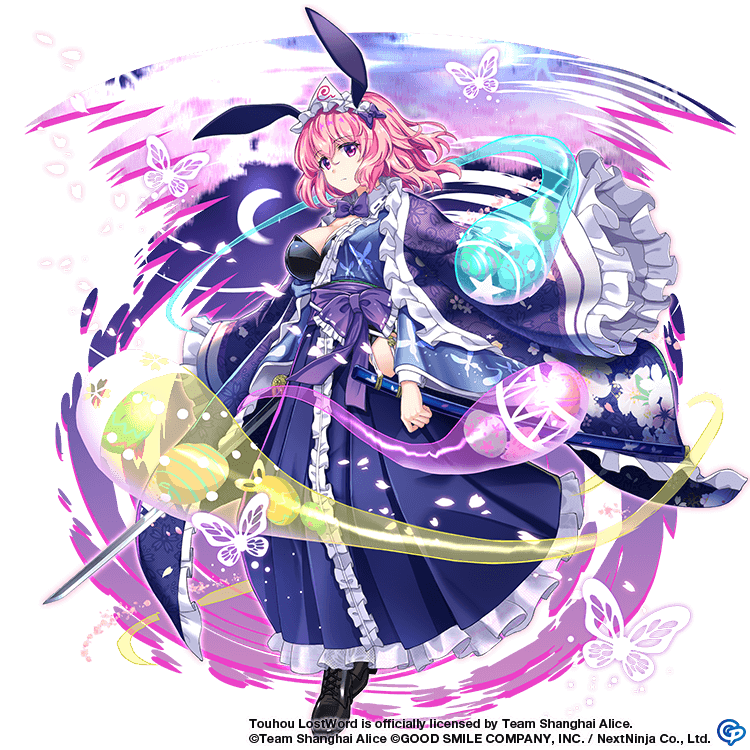 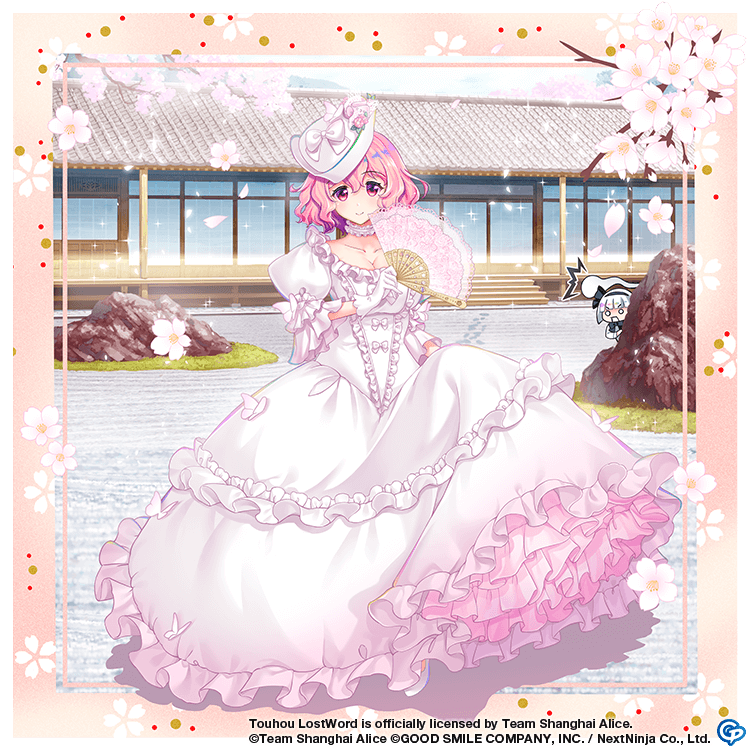 Yuyuko Saigyouji's Spread Shot. She summons spirit butterflies to bombard her target. Butterflies are said to represent souls and be messengers from the realm of the dead even in other countries.
Lights of the Unborn

Yuyuko Saigyouji's Focus Shot. She shoots out an intense and strangely cherry-blossom pink light. With reincarnation, souls that have not yet been born may be the closest to souls that have died and been purified. 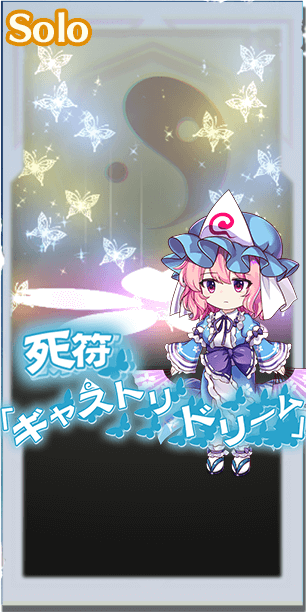 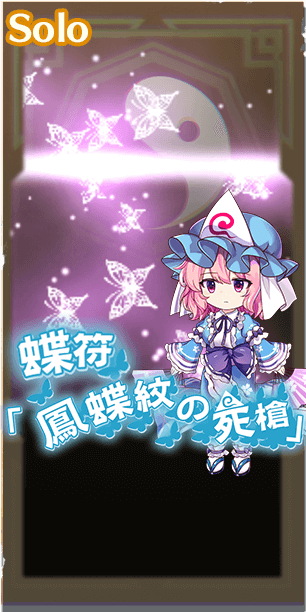 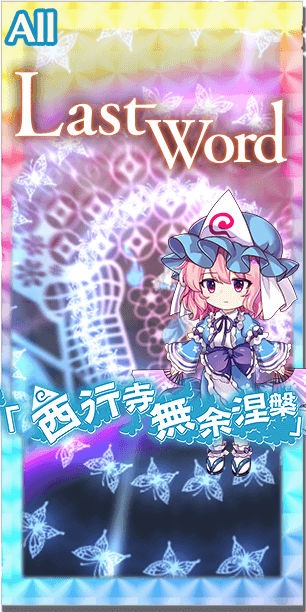 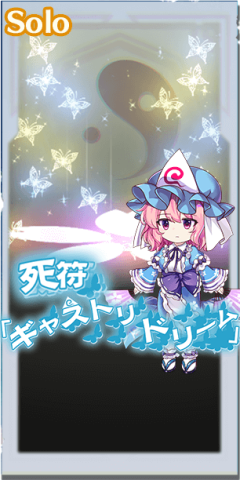 Yuyuko Saigyouji's Spell Card. She unleashes a multitude of spirit butterflies in this nightmarish attack. It is said that people's dreams are all connected, as are the afterlife and the world beyond. Butterflies are the guides that connect the dreams.
*Pre- and Post- effects assume max level. Effects per level can be viewed here.
Pre-Attack Spell Card Effects 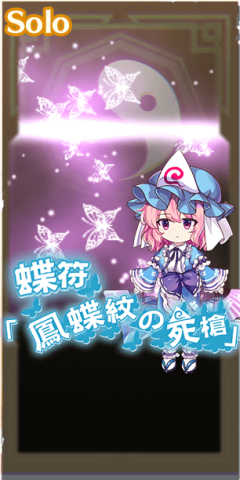 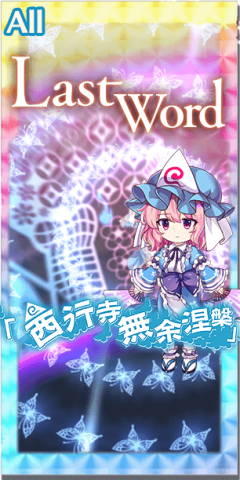 Yuyuko Saigyouji's Last Word. She lets out bursts of powerful light and resurrection butterflies in this manifestation of the return of the soul and death. This Spell Card signifies that the Saigyou Ayakashi is at its full bloom, which also signifies Yuyuko's death. Is Yuyuko herself aware of this?
*Pre- and Post- effects assume max level. Effects per level can be viewed here.
Pre-Attack Spell Card Effects

Immune to Barrier Status: Poison. When attacked with Poison, Spirit Power 0.20 UP.
When using Boost, own Yang ATK 1 level UP (1 turn).

Yuyuko Saigyouji was released on May 11th, 2021, at first limited in the game's first 72-Hour Limited Prayer and then later geting her own Prayer via Festival: Dance of the Butterfly.

The ghostly princess of the Netherworld, Yuyuko Saigyouji is dead and loving it. A carefree, playful glutton who tends to make bizarre statements, it can be easy to mistake her for something of a fool. However, underneath the playful demeanor lies a cunning mind that little can get past. She’s no enemy to make lightly either, possessing the ability to manipulate departed spirits and invite any living being to death, either causing them to fall into slumber or simply perish on the spot. This terrifying ability is reflected in LostWord with her strong offensive potential, being a unquestionably powerful selfish damage dealer and a A-Tier Friend.

For farming, Yuyuko is very strong at blitzing through multi-target stages, but suffers a bit when it comes to mono-target stages. You can remedy this to a extent by giving her an extra turn first to set up with Spirit Power UP using either Spell Card, which will nearly double her output.

For harder fights, Yuyuko is no slouch either. Her Last Word scales extremely well with additional power, dealing nearly double the damage at 3 Points. Her skill 3 giving her Charge means she can work with just about any debuffer without problem. She even has pretty alright access to Elements, having 1 Wood break on both of her Spell Cards without any boosts - though if you want a second Break in a turn, it'll cost a whopping 3 Power. Her only weakness is that she brings no team utility to the table, which is hard to complain about when she simply does so much damage. The high recoil on her Last Word may seem like a weakness too, but it’s rather irrelevant - Last Words locking out all spells on use means Yuyuko is functionally dead after using it in the first place, meaning her remaining health value afterwards is irrelevant.

Overall, Yuyuko’s ability to invite foes to their death is not to be underestimated. If you need damage or a powerful farmer, you can’t go wrong with the Dreaming Ghost.

Here are the chances for Yuyuko’s secondary effects, alongside her Hard and Slicing scaling (per bullet):

Yuyuko typically prefers Spirit Power UP on her Story Cards - she already boosts her own Yang ATK, so Spirit Power is useful both for farming (where the extra Bullets can be a huge help), for Arena (for extra damage), and for Tower (for Breaks). Alternatively, Accuracy UP will help her Breaks land. Lastly, for a stat stick, look for Story Cards with Yang ATK.

Due to the overwhelming amount of Yang ATK UP already present on Yuyuko’s Last Word, alongside her abundance of Accuracy UP, she would benefit further in story cards which debuffs her enemies' YANG DEF and boost the power of her Wood bullets, Body bullets, or both. This is because Yang ATK UP is worth less the more of it you have, as each stage is additive with the last. Meanwhile, YANG DEF DOWN debuffs and effects which boost the damage of specific types of bullets are effectively multiplicative in relation with YANG ATK UP buffs.

Thus, giving her Myouren Temple Anniversary, Protection of Cerpinus or Sporadically Marget are by far her best options, as they fulfill one of the criteria which ramps up her damage.

First, get Under the Flowers to level 5 for the 2 levels of accuracy up it provides, and then get Spirit Service up to 9 to ensure that it gives 3 levels of Yang ATK UP. After that, further skill levels are luxury until Yuyuko gets a Fantasy Rebirth.

+ Powerful Last Word, dealing quite high damage at 1 Power and scaling tremendously at 3.
+ Relatively strong event farmer
+ Self Charge on Skill 3 means she works well with any supporter