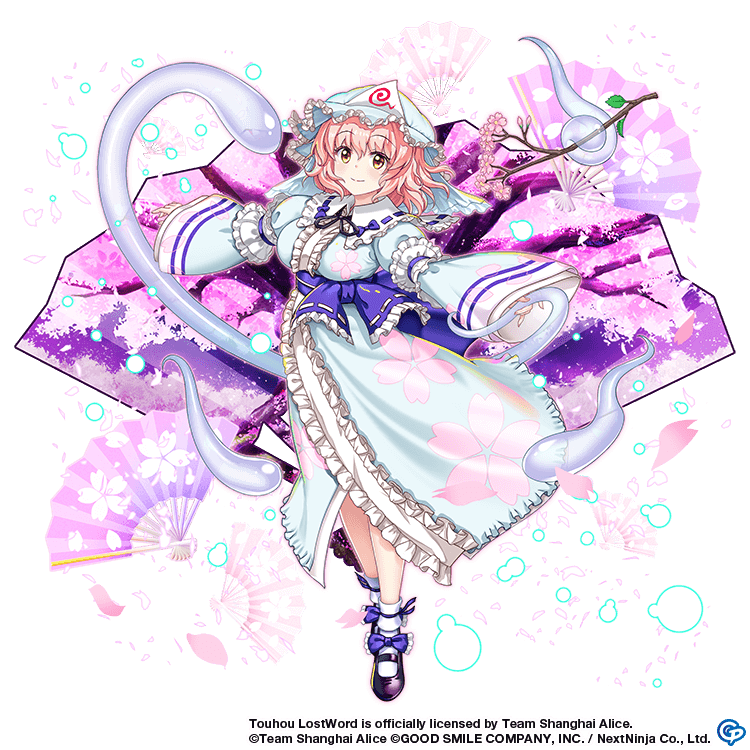 The Spread Shot of Yuyuko Saigyouji from the world with a never-ending winter (a Touhou LW original). Phantom butterflies invite her opponents. All who live are destined to die, but no one can know death while they yet live. Death is always a fantasy, a dream of the living.
Spirit Cherry Blossom Path

The Focus Shot of Yuyuko Saigyouji from the world with a never-ending winter (a Touhou LW original). Cherry blossom spirits lead her opponents. Things decorated with flowers are considered to be beautiful because flowers only last for a short time. It is the nature of humans to long for things that are eternal while lauding the beauty of transient things. They are awfully selfish, arrogant, and weak creatures. 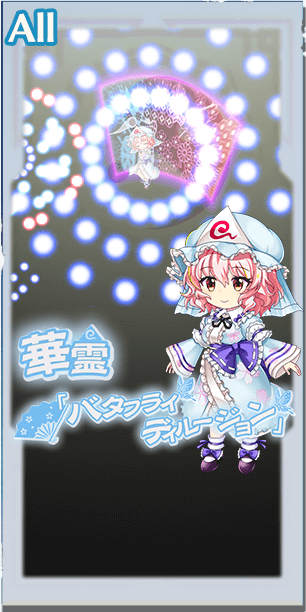 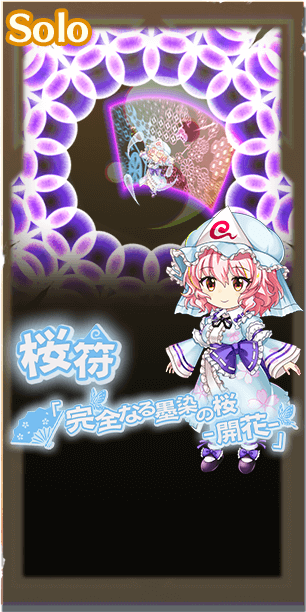 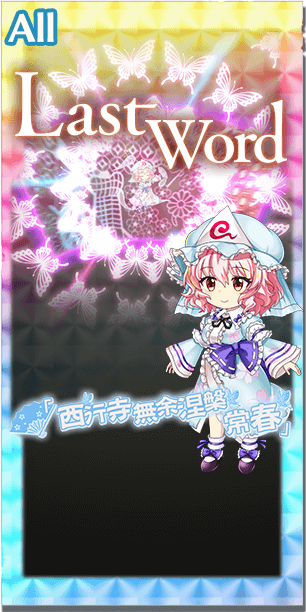 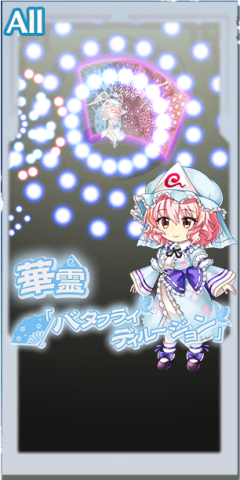 A Spell Card of Yuyuko Saigyouji from the world with a never-ending winter. She unleashes a phantasmal attack of dancing cherry blossoms and phantom butterflies. The lives of plants and bugs are inextricably linked, and bugs are as fleeting as flowers. The ultimate example of this is the butterfly. This is why so many cultures see their bewitching and alluring nature as spiritual. The life cycle of a butterfly coincides with the changing of the seasons throughout the year―it is orderly and delicate, and some may even call it magical.
*Pre- and Post- effects assume max level. Effects per level can be viewed here.
Pre-Attack Spell Card Effects 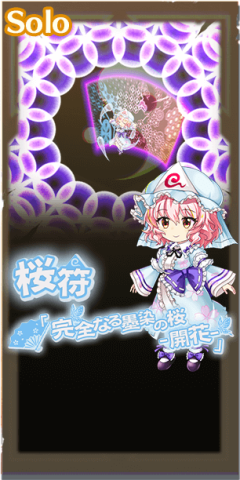 A Spell Card of Yuyuko Saigyouji from the world with a never-ending winter. She attacks with cherry blossom petals that look as if they have been dyed ink-black. Apparently, small cherry blossom flowers with white petals can look as if they are tinted black when in full bloom. Perhaps the ancient poet had this scene in mind as he recited the poem that laments his friend's death. Is it even possible for the hearts of flowers to answer the plea of a poem?
*Pre- and Post- effects assume max level. Effects per level can be viewed here.
Pre-Attack Spell Card Effects 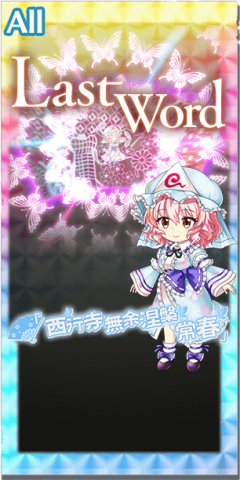 The Last Word of Yuyuko Saigyouji from the world with a never-ending winter (a Touhou LW original). This attack is a manifestation of Yuyuko's earnest wish. Even if you could gather all the spring in Gensokyo, there just isn't quite enough to make the Saigyou Ayakashi bloom. No, perhaps there is just barely enough.

Yuyuko said she needed just a little bit more spring before she battled with the humans. That is what happened in the correct timeline. The reason why she cannot bring the sleeper beneath the Saigyou Ayakashi back to life is hidden within her forgotten memories. Ghosts are beings of death and thus have the same temperament as winter, whereas cherry blossoms are flowers and have the same temperament as spring. There is an impassable barrier between them.
*Pre- and Post- effects assume max level. Effects per level can be viewed here.
Pre-Attack Spell Card Effects

There is a world in which the beloved Yuyuko Saigyouji appears closer than ever to achieving her ultimate goal: To collect all of Gensokyo’s Spring and undo the seal upon the Saigyou Ayakashi beneath which the Daughter of Fujimi sleeps eternal. Beneath the calm beauty of falling pink petals lies a deadly Friend who will stop at nothing to ensure that her wish comes true.

The Yuyuko of the A7 World manifests her desires clearly through her Killers, all of which seemingly target any who would have opposed her during the Spring Snow Incident. Those Killers include the Human, Shrine Maiden, Magician, Maid, and Incident Resolver tags; a triple whammy for Reimu, Marisa and Sakuya. Yuyuko’s reach also extends to the forces of nature and resting spirits surrounding Spring itself, with Spring, Fairy, Soul Killers cutting down a variety of pesky opponents.

Yuyuko’s damage is equally divided between both Water and Wood Elements, with all three of her Spell Cards feature 3 lines each. While her first two Spell Cards are mostly Wood heavy in the front lines, her Last Word flips this on its head by moving Water lines to the front. This is of little consequence, however, due to the fact that players can access 5 of her 6 lines with a 2P Boost; easy enough to achieve with Yuyuko’s true value as a Support type Friend.

Yuyuko provides an incredibly valuable range of buffs to her team. Her second Skill, second Spell Card and her Last Word all contribute Spirit P to her entire team, while her first Skill provides herself a small boost; combined to give her just enough to allow her to fire off a 2P boost on Turn 1. Meanwhile, her skills and Spell Cards all contribute some measure of Yin ATK, Yin DEF (useful for Hard scaling), Yang DEF, Crit ATK and Accuracy to herself and her allies, raising their offensive capabilities. This can be further augmented by her Boosting and Grazing, which increase the party’s Yin DEF and Yin ATK by 1 per level respectively. Players will enjoy stacking these buffs even in long fights, with low cooldowns on all her skills allowing for quick reapplication.

The Princess of the Netherworld also comes with some bulk, protecting her teammates and herself from harm. Asides from raising Yin DEF, Yuyuko also increases team Evasion with her first Spell Card, while also recovering the Barriers of her team mates. Her Ability allows her to take more hits, with Yuyuko taking 30% less damage from Elements she resists. In need of some recovery? Her Spread Shot will heal 30% of her HP when boosted to 2P on her fifth bullet line.

Finally, Yuyuko has the ever useful anomaly set and break utility in her kit. Her second Skill Card will deliver up to three barriers worth of Freeze to a single enemy, while her first Spell Card lays down a single barrier worth of Freeze to the entire enemy party. These anomalies can be simultaneously broken with her first Spell Card at 2P, or on her Spread Shot at 2P.

In summary, Yuyuko is a great support Friend who fills her team with energy while enabling Yin teams to do their best against tier enemies. Should they happen to have a vested interest against taking back spring for Gensokyo, she will work doubly hard to purge them from existence.

The Witch of Scarlet Dreams will give Yuyuko the boost she needs to constantly be firing on full cylinders, especially when looking to maximize her Freeze Anomalies. Youkai Mountain Anniversary is a great alternative to The Witch of Scarlet Dreams, providing both Spirit P up while also augmenting her second Spell Card damage by 25% and providing some Yin DEF stats for her hard scaling bullets.

Unknown Barrier team reigns supreme, giving her both 2 levels of Yin ATK while boosting all Energy lines on her Last Word by 50%. When focusing on a single enemy however, you may prefer Anniversary at the SDM for a 3 level Yin DEF debuff on a single target while boosting her Laser output by 25%.

Prioritize her third skill, Wild Blooming Song in order to bring consistency into the game with team Accuracy up. Her second skill, Flower-Viewing Rite can come next, providing her allies some Spirit P to help furnish their shots with some extra firepower while setting Quick on herself; great for firing off a Spell Card to further boost their abilities (her second Spell Card or Last Word are booth good contenders for this gimmick). Her first skill, Full Bloom Dance can come last, providing her allies both Yin and Yang DEF as well as some Spirit P to herself.