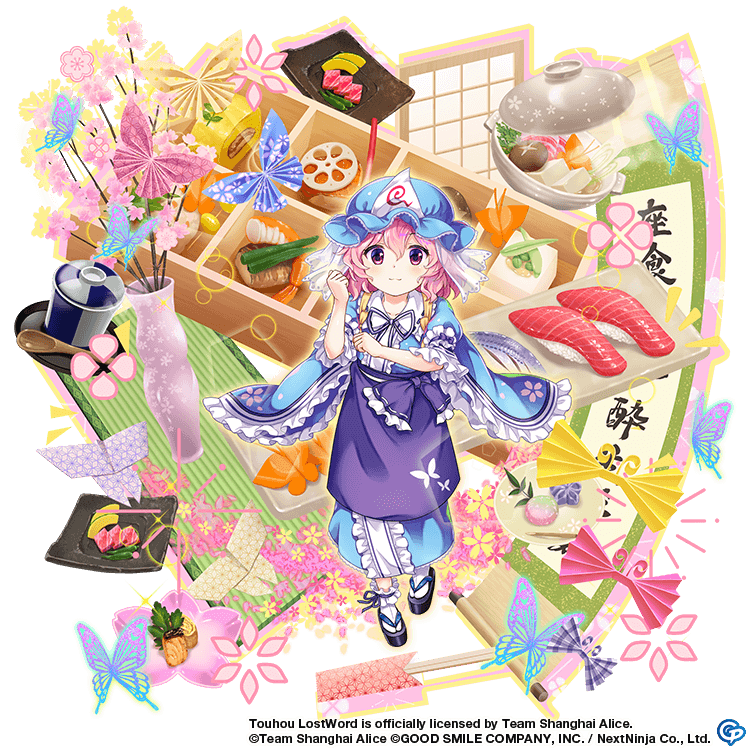 Yuyuko Saigyouji (Tiny Ghost Mistress)'s Spread Shot. This attack is a special dance where she flips up and backward in the air. This is evocative of a folding screen that is placed upside down next to the bedside of the deceased. They are placed as such as part of a practice called sakasa-goto, a part of Japanese funeral rites, where everyday objects and customs are inverted to symbolize that it is not an everyday occasion. It is said that sakasa-goto is also a ritual to isolate the realm of the dead from the world of the living.
Dance of the Butterfly Dream

Yuyuko Saigyouji (Tiny Ghost Mistress)'s Focus Shot. She dances with a fan in each hand. Her remarkable high-speed twirling is reminiscent of a spinning top. The dance emits light that seems to take the form of fluttering butterflies. 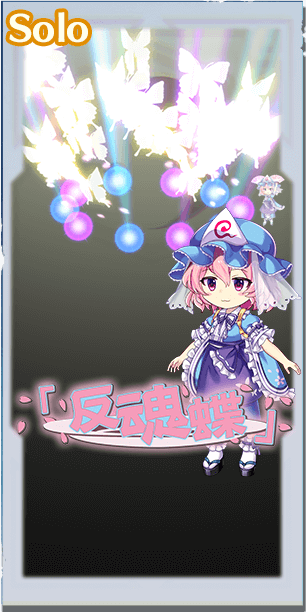 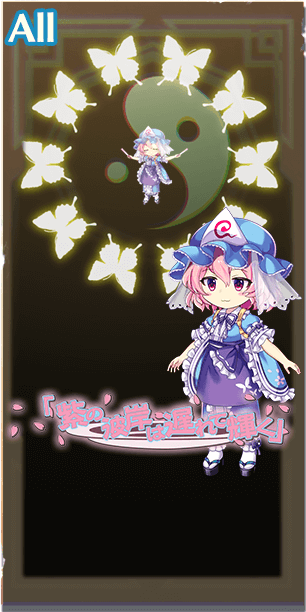 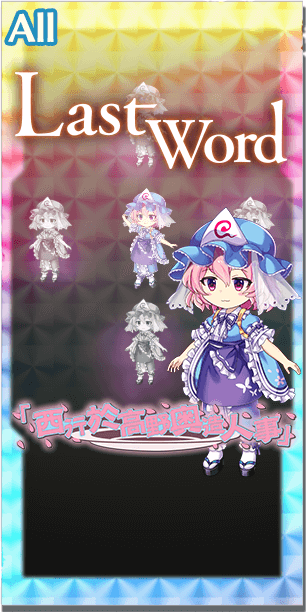 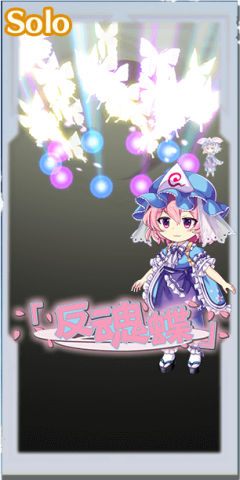 Yuyuko Saigyouji (Tiny Ghost Mistress)'s Spell Card. She attacks with butterflies that revive the dead. According to a certain magician, this is a Spell Card that resurrects the dead with butterfly power. It is thought that these butterflies are a form of spirit energy.
*Pre- and Post- effects assume max level. Effects per level can be viewed here.
Pre-Attack Spell Card Effects 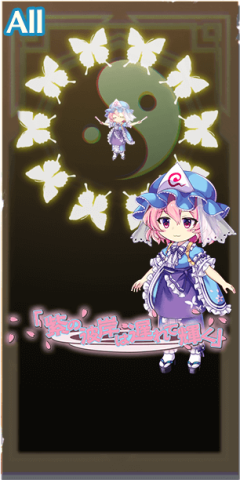 Yuyuko Saigyouji (Tiny Ghost Mistress)'s Spell Card. She shoots out spirit butterflies and light from the world of the dead. It seems that Yuyuko originally prepared this Spell Card for a certain youkai. It is said that there is a place somewhere in Gensokyo where purple cherry blossoms bloom.
*Pre- and Post- effects assume max level. Effects per level can be viewed here.
Pre-Attack Spell Card Effects 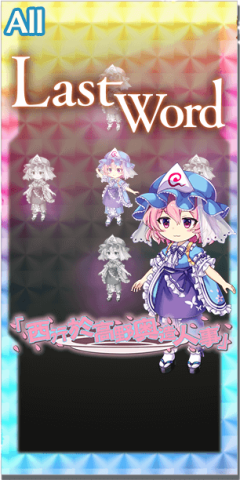 Yuyuko Saigyouji (Tiny Ghost Mistress)'s Last Word (a Touhou LW original). She creates clones of herself with incense, who then attack with various patterns of bullets. A prodigious poet left behind a tale of him attempting to craft a human. His attempt was a failure, and the human-like thing that he made was discarded on the mountain.
*Pre- and Post- effects assume max level. Effects per level can be viewed here.
Pre-Attack Spell Card Effects

In the myriad of realities, there is one where the Saigyou Ayakashi, a truly terrifying tree which feasts on the souls of the living, runs rampant, on the verge of fully blooming. Yuyuko Saigyouji, the Tiny Ghost Mistress, hails from this reality. Unaware of how or why she died, all she knows is her duty - to ensure the tree’s appetite is sated, and that it does not fully blossom and end the world. Outside of this, she’s a very talented chef who takes pride in her cooking abilities, making sure that the competitors from other worlds are given a nice meal - one that very may well be their last. Whilst she may be small, she’s certainly still more than capable of defending the Hakugyoku Arena, as an S Tier Friend.

For farming purposes, Yuyuko has some pretty huge frontloaded All targeting damage with her Last Word, Saigyo Making a Human Figure at Mt. Koya, in spite of her tiny size. However, where she truly shines is when fighting Youkai, Fairies, Undead, Soul-like presences, Swordswomans, Magicians, or Martial Artists (...in other words, most of the cast with a few exceptions). At that point, her Killers will deal truly devastating levels of damage and invite her foes to a swift slumber. Do note she suffers a penalty in Full Auto due to automatically using up her Barriers, and thus losing out on damage from her character ability.
Solo Stage Farms: 3-3-3, 3-11-1

For harder fights, Yuyuko’s damage is still utterly devastating, but it doesn’t really change all that much - you can still squeeze a fair chunk of extra damage out of her by setting up, of course, but she doesn’t really need set up time for most fights to do most of her damage. As a result, you can have her wait to swoop in for when the opponent is in a Full Break status to invite them to death, or even have her help Break them early. She does have a good amount of Water Break potential - between a 0P Water Break on her Focus Shot, 1/2/3 Solo targeting Breaks for 0/1/2 Spirit Power on Resurrection Butterfly, and 0/0/1/3 All targeting Breaks for 0/1/2/3 Spirit Power on The Purple Higan Shines Late, she's got a respectable amount of breaks - including a silly 6 All targeting Water Breaks for 3 Spirit Power on her Last Word, should you chose to use it for that. Lastly, she also has some decent teamwide support for Slice units by providing her teammates with 2 Levels of Agility UP for 1 turn via Fe ast.

With that said, there is a cost to her power. She’s very reliant upon keeping her Barriers around to have anomalies on them to maximize her output, so you’ll have to sacrifice a lot of damage if you want to keep her out for more than 1 or 2 turns for Breaking. On that note, if you do take a turn to set Yuyuko up, make sure to max out her Freeze Barriers - it's harder to get Agility UP than it is Yin ATK UP.  However, depending on how many Killers she can land, it may be more useful to opt for maximizing her Poison Barriers instead.

This tiny ghost mistress has just one job, and that’s to do big damage. She has somewhat narrow Breaks and only some team support, but she’ll hit hard enough it’ll send you straight to the netherworld, for some of her famous food.

The Slice values of her attacks are as follows:

If you're looking to use Yuyuko in a extended fight to make the most of her Breaks, make sure to give her plenty of Spirit Power UP. If you need even more damage and the fight allows it, Yin ATK UP or Agility UP are her best bets. For stat sticks, look to anything with Yin ATK & Agility on it, with Yin ATK being favored.

Whilst the Yang ATK on it is completely worthless, Ordinary Magician provides a solid amount of Laser DMG UP and is thus small Yuyuko's best option at the moment, due to the large amount of Laser on her Last Word. Other Laser DMG UP options work just as well, but Ordinary Magician is the best by a small amount due to the Agility on it. In the future, Water DMG UP Story Cards will be her best bet, when they are released. Otherwise, you can also utilize Yin ATK UP or Agility UP.

Firstly, all three of Yuyuko's skills should be raised to level 6, as that will give Yuyuko, in total, 1 additional Poison and Freeze barrier on herself turn 1, as well as 1 additional Spirit Power. After that, Fe ast should be brought to level 10, for the additional Agility, and then it doesn't particularly matter which of Flo wer or Cor pse you bring up to 10 first as they both provide minor benefits.

-Low team utility
-Damage suffers if she needs to use Barrier