About Fortune Dust and Fantasy Rebirth 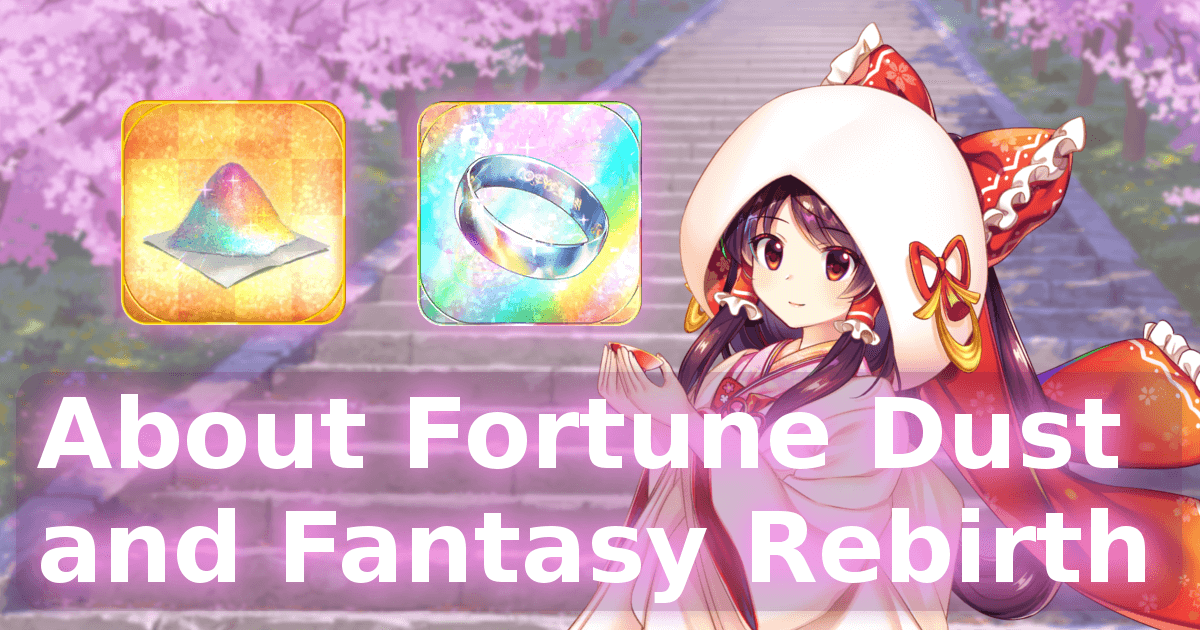 Hi friends! Curious about Fortune Dust, or Fantasy Rebirth? This guide's got you covered!

You know how those God Crystals tend to break apart dramatically when you use them for Prayer? Well, it seems that them breaking apart leaves behind some really sparkly, pretty dust that the main character’s going to start actually picking up come the next update! Why’s that? Because you can turn in this pretty dust (known as Fortune Dust) for some pretty rad prizes over at Sanae’s shop!

Firstly, how do you acquire Fortune Dust? Firstly, any time you use God Crystals to Pray 10 times, you'll get 10 piles of Fortune Dust as a bonus. Additionally, for Step-up banners, the second and fourth pull will also give out some bonus Fortune Dust, even though they don’t cost anything. Secondly, you can also get some from events - every 5 Rare Points can be turned in for 1 pile of Fortune Dust. Lastly, they are also given out as Login Bonuses during special campaigns - such as the upcoming Summer Login Bonus!

Now getting a whole pile of Fortune Dust is all well and good, but you may be wondering what you can do with it. Outside of being pretty in your inventory (and probably making the main character sneeze, lugging so much Dust around), you can trade it in at Sanae’s office shop for some prizes! The most notable prizes by far are the Ring of Fate, and the Divine Paper Doll. You can also trade it in for Tokens and gold materials, but given the rarity of the dust I highly suggest saving it up for a Ring of Fate or a Divine Paper Doll.

Below, you can find a list of all the items in the shop, and their prices. Every item is purchased 1 at a time. The shop resets monthly.

Of course, now you may be wondering what a Ring of Fate is. This leads us into the other major feature this article is going to cover: Fantasy Rebirth!

Having powerful Friends is all well and good, but once you’ve fully upgraded them, there’s no other way for them to get stronger...or is there? Fantasy Rebirth is here for you to break that expectation!

Before I explain the benefits, it’s important to stress that there are some requirements before you can perform a Fantasy Rebirth. Firstly, your Friend must meet all of the following requirements:

In other words, they have to be completely maxed out. After they meet the prerequisites, you must then accumulate 1000 Mirrors of Rebirth for them. You acquire these mirrors from exploring special stages that you can challenge 3 times a day each. Each of these stages drops Mirrors of Rebirth exclusive to a single Friend, and in order to challenge them that Friend must meet the requirements to Fantasy Rebirth. Additionally, for these stages you are only allowed to field 3 Friends, and one of them must be the Friend that the stage drops mirrors for that meets the requirements. Lastly, these stages have 3 difficulties, rewarding up to 20 Mirrors on Lunatic (or 60 per day in other words, thus meaning it’ll take about 17 days to Fantasy Rebirth a unit).

As this is important, it bears repeating: In order to accumulate the resources to perform a Fantasy Rebirth, a unit must meet all of the pre-requisites. As such, whenever a new Friend's Fantasy Rebirth is announced, and you want to perform Fantasy Rebirth on them, it would be a good idea to start training them up sooner rather than later, given the time gate behind training skills up to Level 10 along with the time it takes to train them up to level 100.

After you’ve obtained 1000 Mirrors of Rebirth, you can perform a Fantasy Rebirth. Your reward for this is that your Friend is reset to level 1, and their Enhance stats (the bonus stats from incense wood) are reduced to 0. Additionally, the Cost to deploy them goes from 12 to 14 Spirit P. Finally, it will also take twice as much EXP to level them back up to 100. W-wait, I thought they were supposed to get stronger…?!

Fret not. First of all, the Friend still remains at Max Limit Break, Awakening 5, Rank 5, and all three of their skills stay at Level 10. Secondly, they gain a lot more stats from Enhance - to use the first announced character as an example, at level 100 Reimu Hakurei’s Yang DEF rises from 1235 to 1300, and her Yang ATK goes up from 930 to 1150, with her stat total rising to from 6450 to 7020! Lastly, they’re also treated as if they were 40 Levels higher for the sake of damage calculation, which winds up being about 1.4x damage. As a result, most Friends will find themselves doing approximately 1.5x to 1.7x more damage after a Fantasy Rebirth.

Additionally, once a Friend has reached max level, and you have Enhanced all of their stats to maximum, you can unlock Anima! This feature allows them to move on the home screen with special animations - a common point of comparison is Live 2D, although it hasn’t been specified what tech they use for it. Do keep in mind there is a substantial cost to unlocking Anima - dozens of three different types of gold Scrolls (aka Scroll (3)), as well as Coins (to use a example, one character's Anima costs are 60 gold Dragon scrolls, 50 gold Cloud scrolls, 40 gold Serpent scrolls, and 20,000 coins). Best start saving those Scrolls up!

Do note that Fantasy Rebirth is not available for all Friends, but new ones are constantly being added For a example of a Fantasy Rebirth costume, check out Reimu below! 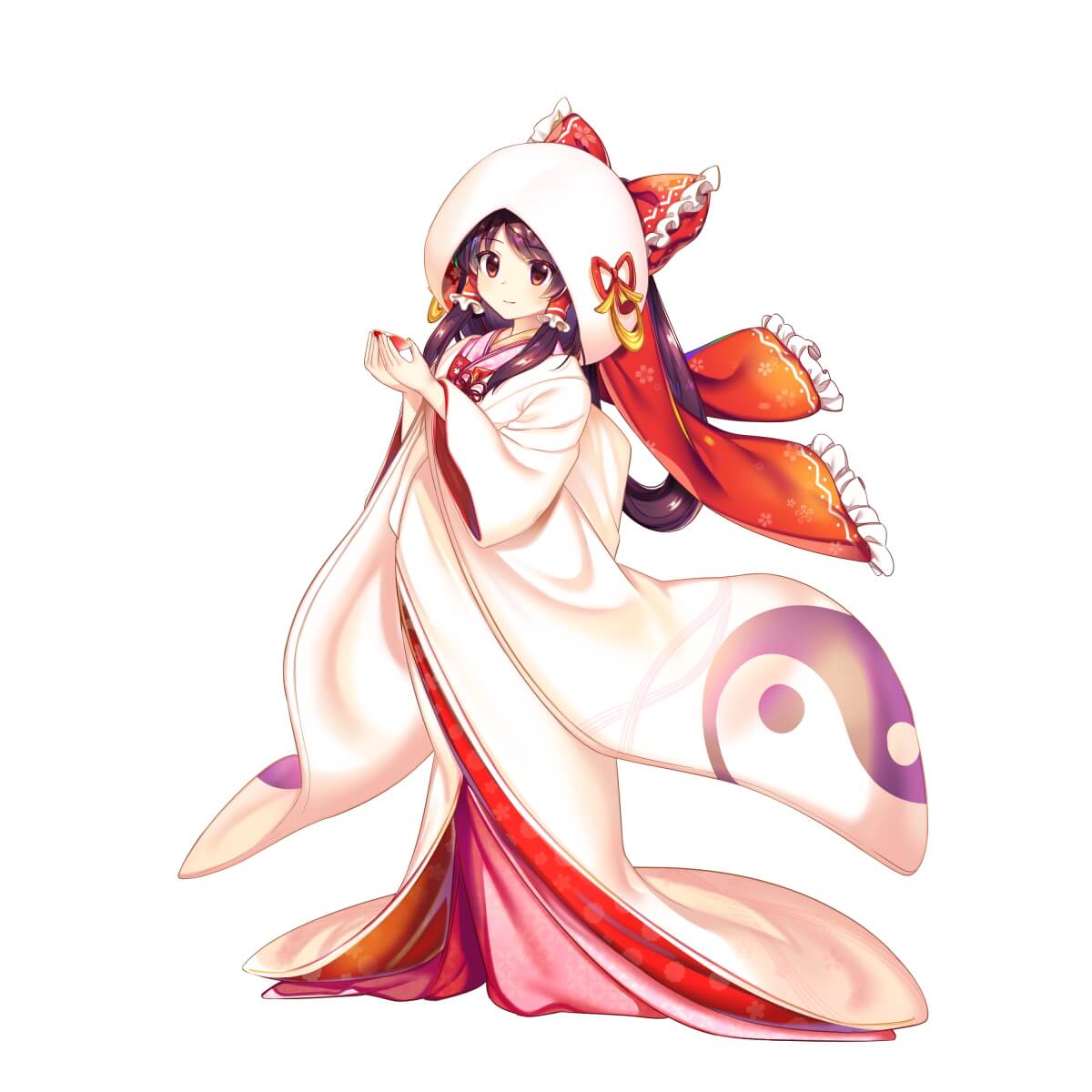