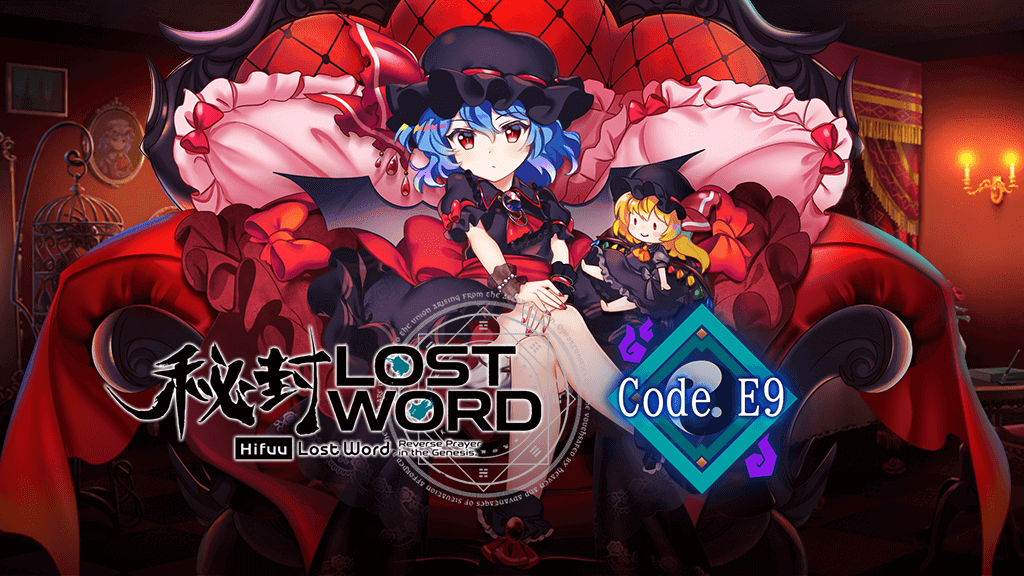 Hi Friends! The first anniversary of Touhou LostWord Global is coming in hot, so it’s time for Phantasma and Caroline to break down what the game will be doing in preparation for the main event! As always, this article will be trimming some of the fat in terms of old information or remarks for ongoing events, but the full report can always be seen in the video above! Some of the events mentioned here will be out of order as well, going from most urgent to lighter things. We have a lot to unpack this time around, so let’s get right into it!

After going over the ongoing prayers for Z1 Marisa Kirisame, R2 Yuyuko Saigyouji, A6 Sakuya Izayoi, and A9 Aya Shameimaru, we get right into some new info, but first there is a very pressing issue to discuss, shown near the end of the Dev Letter… 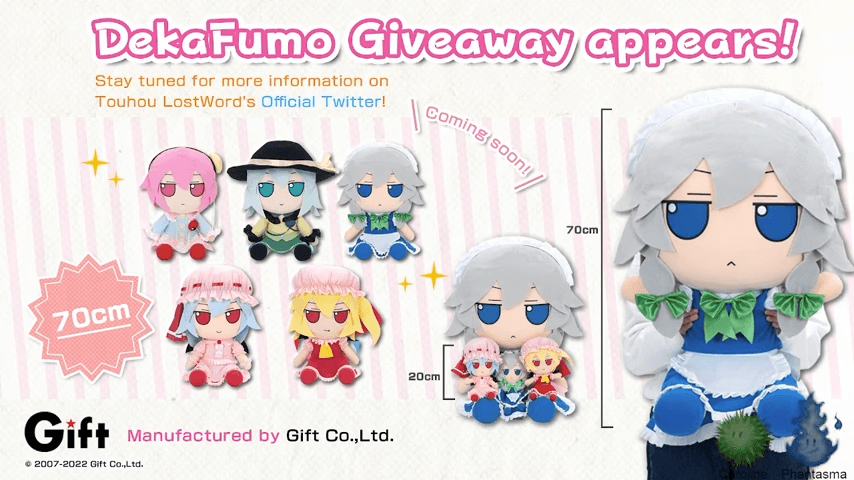 While only a sneak peek, there will be a giveaway for official DekaFumos featured on LostWord’s Official Twitter! Fumos are a heavy blessing, and just look at those HUGE 70cm fumos compared to the normal 20cm ones! Fumo Sakuya can certainly pull off her jobs in the Scarlet Devil Mansion with that size, so don’t sleep on her! The giveaway will certainly be around anniversary time, so keep your eyes peeled on their Twitter until then. 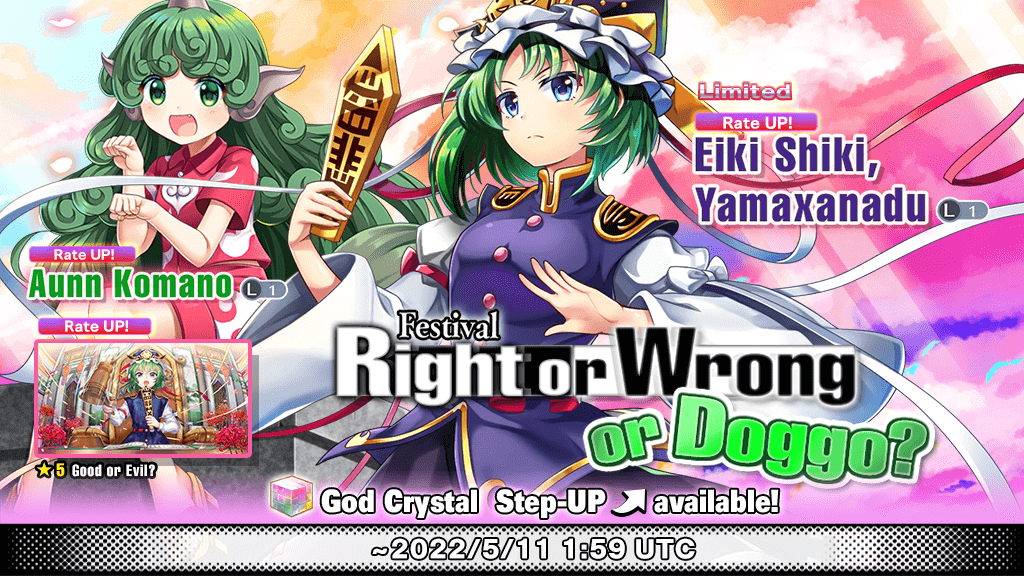 Now…for actual in-game content (less exciting, I know), two more Friends have been announced and will be coming into the game April 28th, or next maintenance! Eiki Shiki, Yamaxanadu and (not) her trusty dog, Aunn Komamo, will be introduced on a Festival prayer, with Eiki as the Festival Friend and Aunn a General Friend. This means that Eiki will cost 150 Exchange Points and Aunn only 100 Exchange Points, like previous General Friends. The prayer will also come with an Ascending God Crystal Step-UP, so look forward to their introduction! Hopefully Eiki will judge your luck favorably before they leave on May 5th… 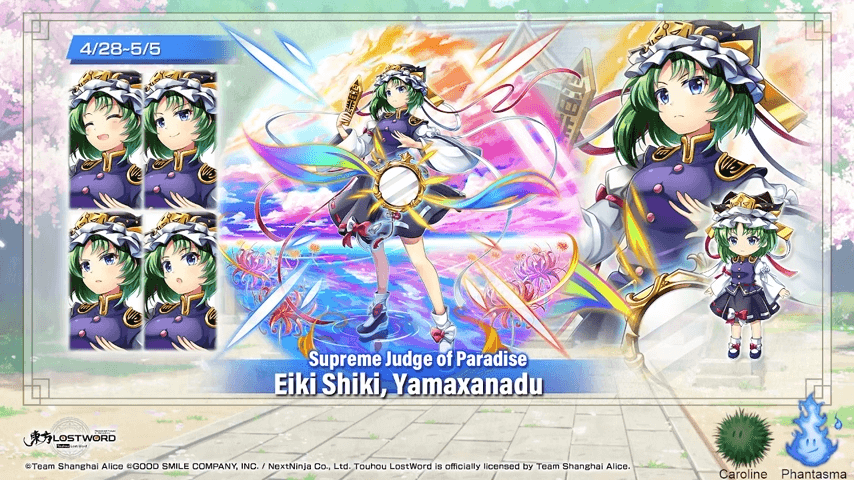 Eiki comes with her own Mirrors of Rebirth! (Not really) 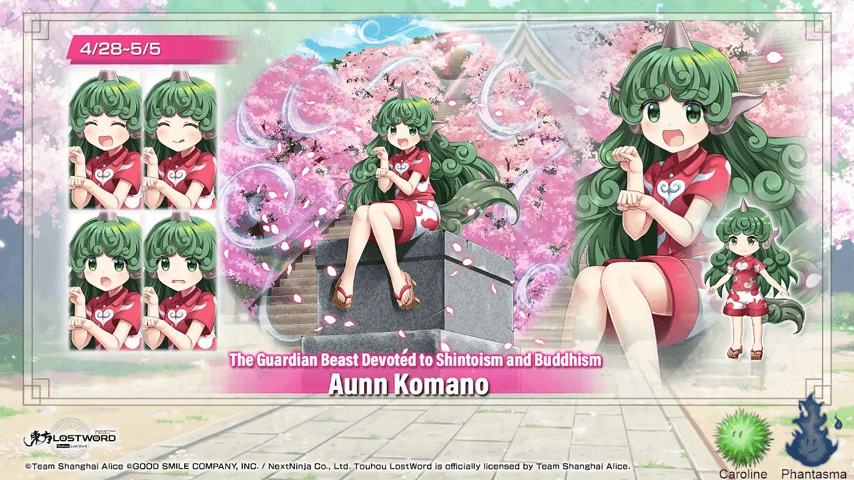 This duo-prayer will have yet another new 5* story card, this time being Good or Evil? This is a rather special story card, serving as 2 levels of both Yin ATK and Yang ATK UP (2T) (though only for Attack-Type Friends)! It also has a stat stick for both offensive stats, truly serving as a balance between right and wrong. Is it conceited to feature a story card with your face on it during your own prayer?

Viewers of the Dev Letter might notice that I missed another new Friend, one that is on the article’s cover itself. Just…be patient, okay? 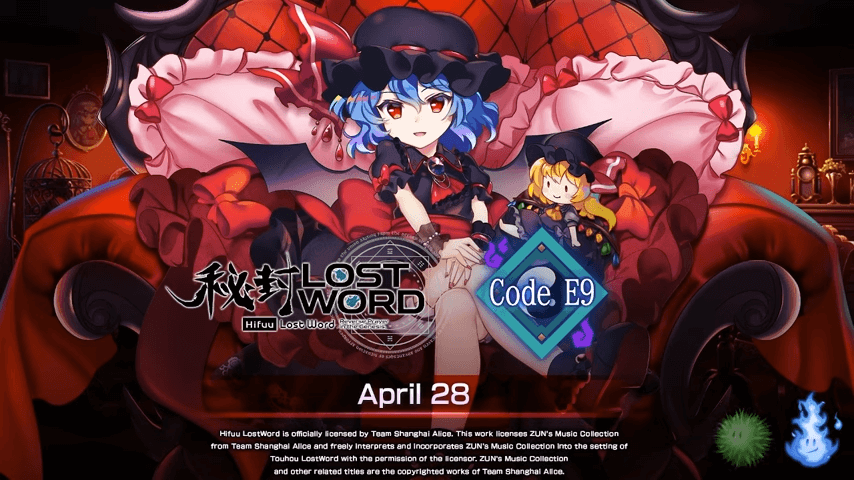 If you were left totally stumped from the story of Hifuu LostWord Code B3 and Bm3, then you’re in luck! The next part of the Hifuu LostWord story, Code E9 - Pursuing Pseudo Paradise, is here to introduce itself come April 28th! With a Divergence Rank of 9, who knows what will even happen in this multiverse?! As usual, the stream gave an overview of many of the characters introduced and their designs, but for those who want to enter it blind, I’ll spare you images of those characters. Although, I can’t really hold off on spoiling this one… 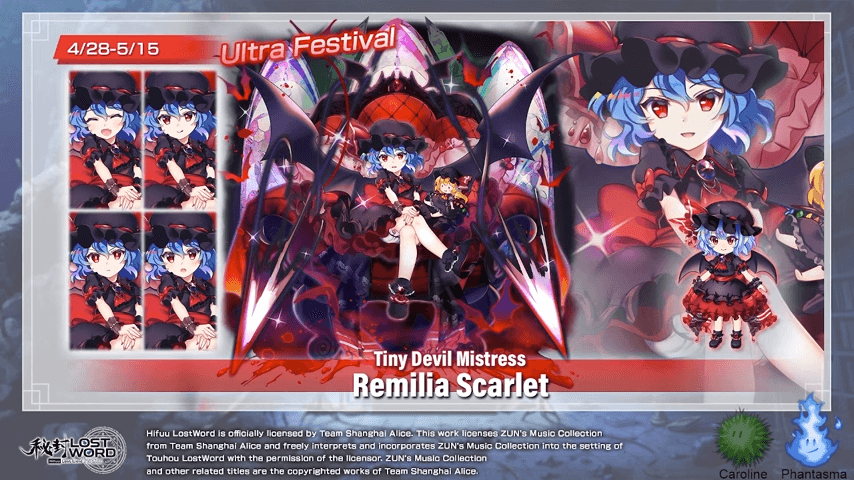 The first E9 Friend who (surprise surprise) is an Ultra Festival Friend will be making her appearance upon the next maintenance: it’s the Tiny Devil Mistress, Remilia Scarlet! Just like Yorihime from the B3 multiverse, she is sporting a vastly different look, likely reflecting on the differences in her universe. With that cute look and her Flandre fu-dol though, I’m sure she’ll be a good Friend to pull for. As an Ultra Festival, Remilia will stay for a longer time than usual, getting bored of her prayer and leaving on May 15th. While she might not have God Crystal Step-UP, each God Crystal 10-pull will grant double the Fortune Dust, so 20 dust per pull! 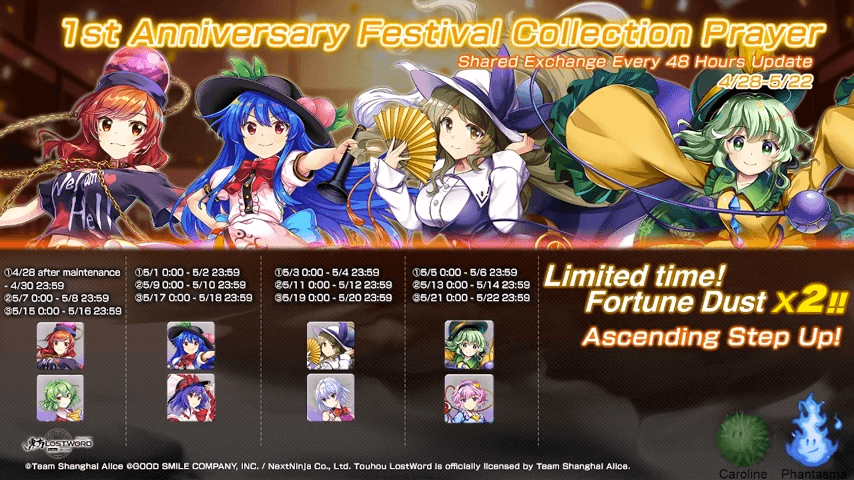 Most of these characters have connections...what about Hecatia and Yuuka then?

Starting before the 1st Anniversary and proudly running through it will be the 1st Anniversary Festival Collection Prayer! It might look complex, but to put it simply: a rotation of 4 different sets of 2 Festival Friends will be making their appearances every 48 hours for 12 sessions total! This means that each Festival batch will make their appearance 3 times, and each one will have a refreshed Ascending God Crystal Step-UP on top of double Fortune Dust! Since Exchange Points are retained throughout the entire prayer, you can easily build up Exchange Points with the Ascending Step-UPs until the last rotation that you want for an easier sparking experience!

This Festival is certainly a must to keep your eyes on if you desire any of the 8 Festival Friends featured, and who knows? Something similar to this may run in the future… 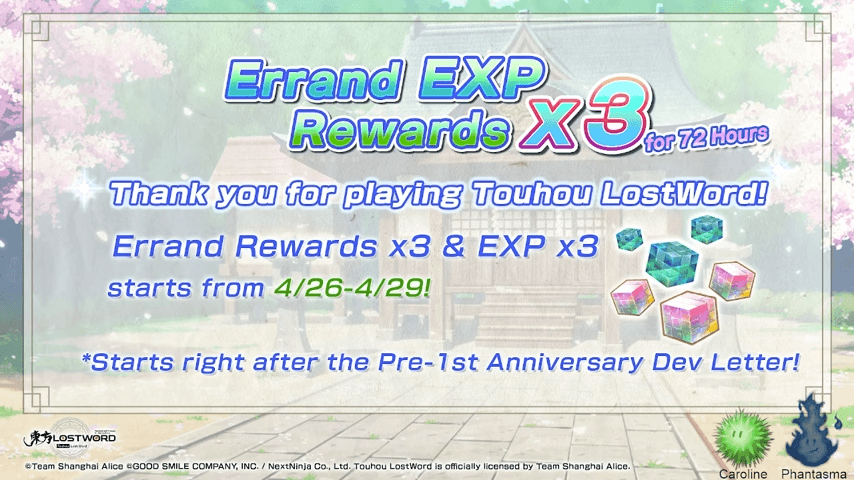 Now for something much more urgent, and a big one at that! For the next 3 days (72 hours, however you want to judge the time…4320 minutes, anyone?), errands will be dropping 3 times their rewards! Triple books, triple tiles…triple Seal and God Crystals! This is a very rare opportunity that should definitely be taken advantage of before it is gone.

The triple rewards begin at 2:00 AM UTC, or in less than 10 minutes! They likewise will be gone at 2:00 AM UTC on April 29th, but don’t panic! The guide regarding increased drop rates before can still help, even if it is only about doubled drop rates. Even if you’re not optimal, you are definitely guaranteed some good rewards from the ensured limited errands! 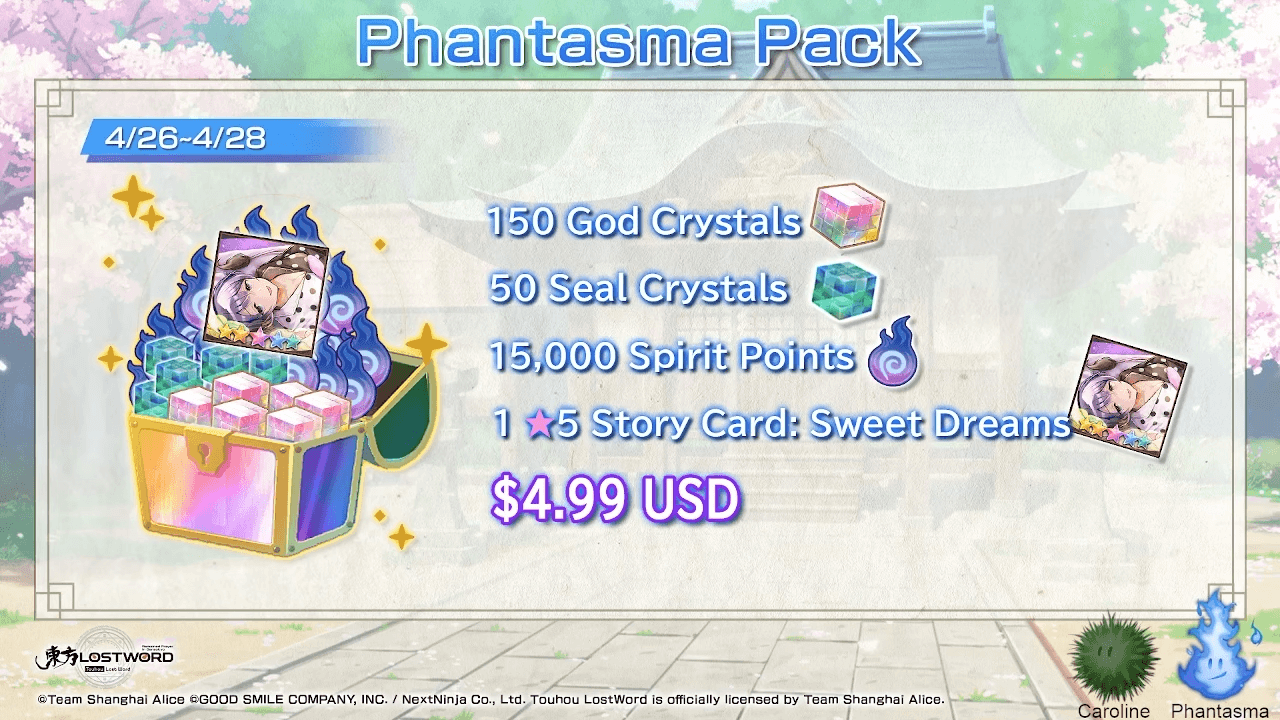 Coming in with a similar sense of urgency is the second Phantasma Pack! This one promises 150 God Crystals, 50 Seal Crystals, 15,000 Spirit Points, and the recently new 5* story card, Sweet Dreams! It’s cost is rather low for how much Spirit Points it provides, both for character EXP grinding and farming, but that only means its runtime is shorter than your usual limited pack! 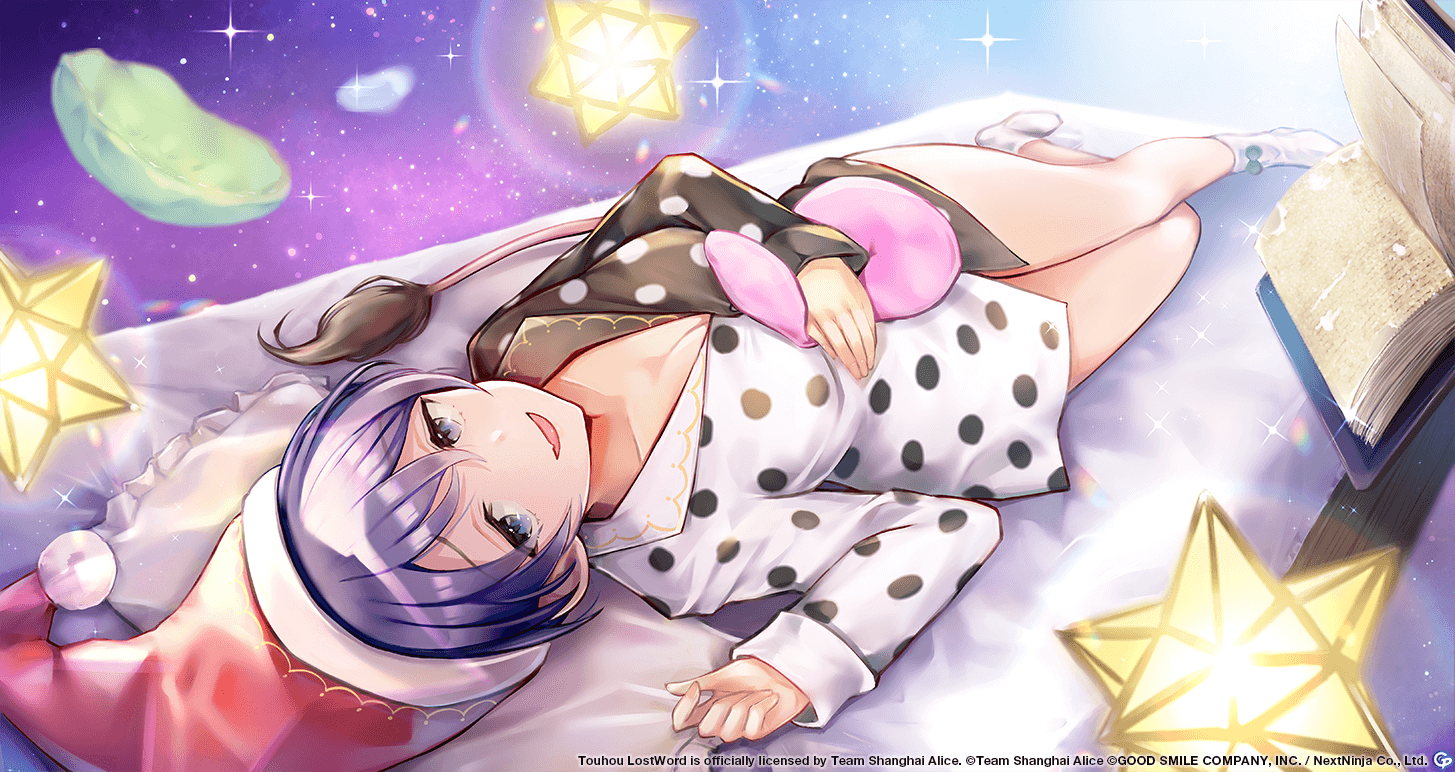 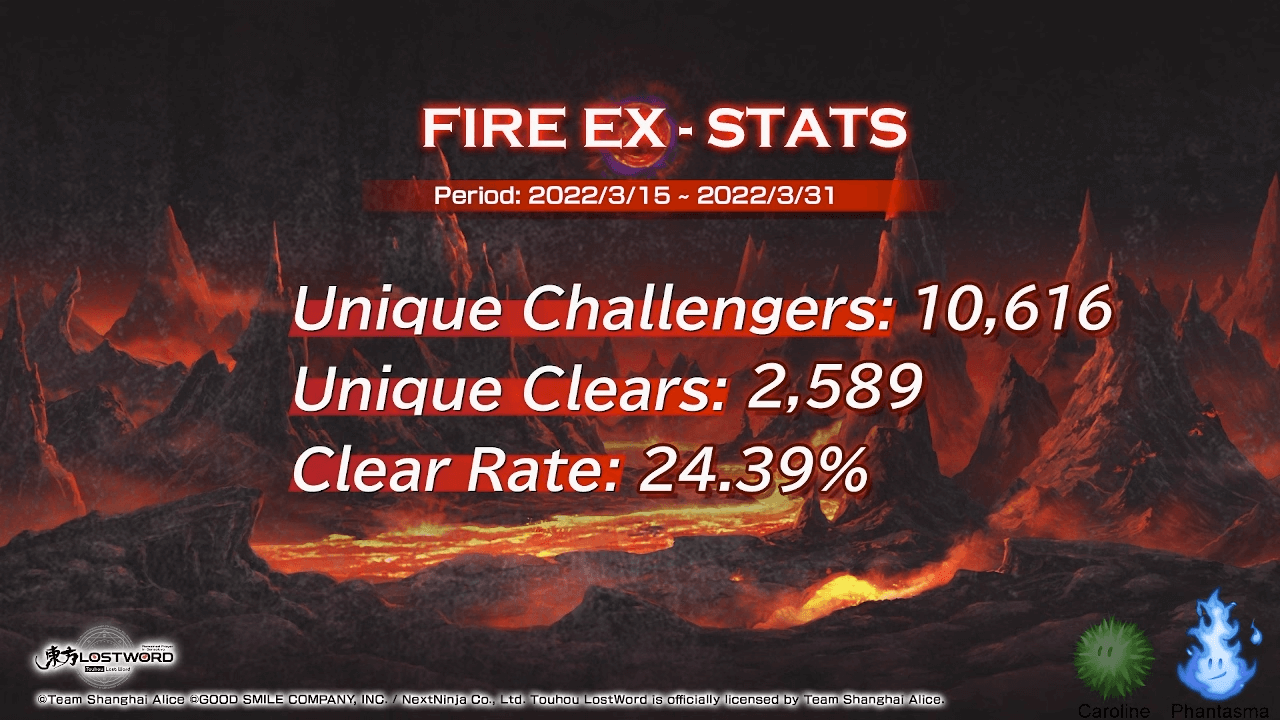 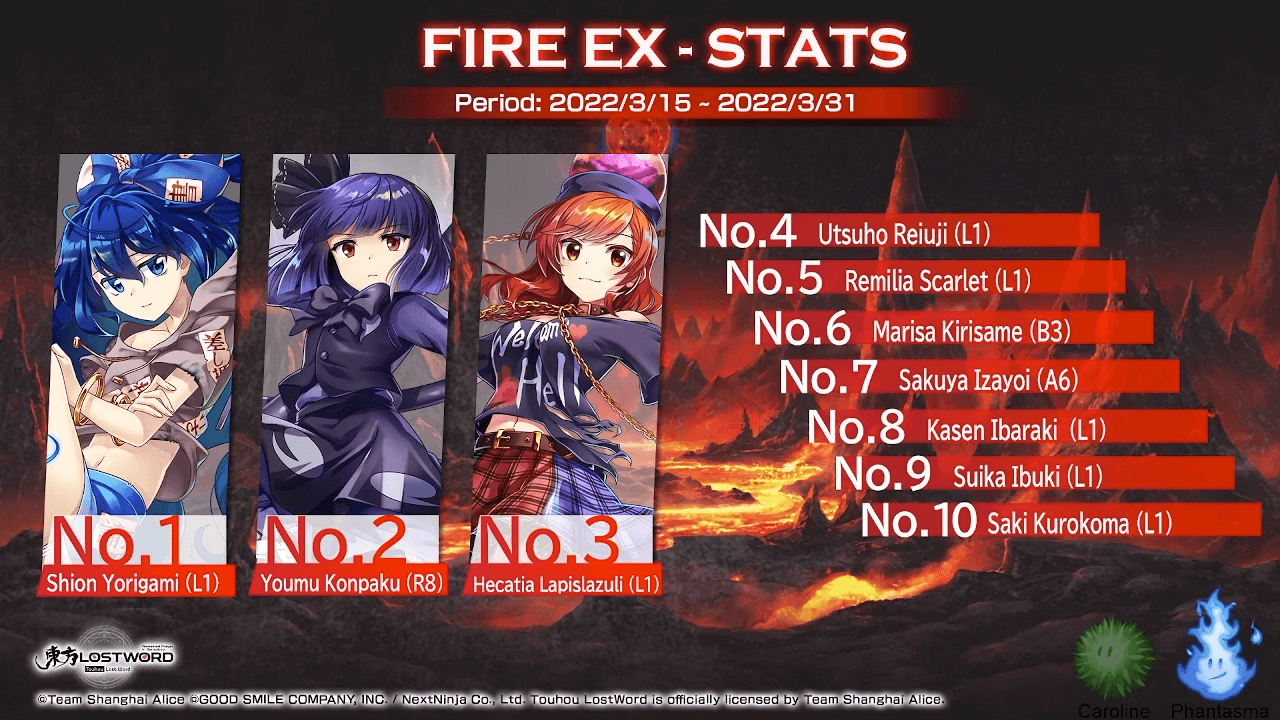 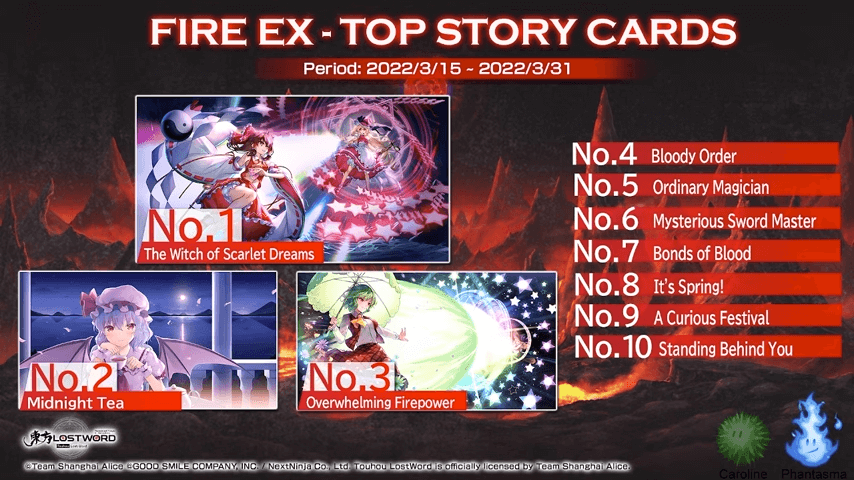 For something a little different, Phantasma collected some statistics regarding the Fire EX Battle Stage, just like he did for Moon EX! It’s the same as before: Clear Rate, Most Used Friends, and Most Used Story Cards. However, the clear rate was a lot higher this time, at 24.39% compared to Moon EX’s 8.84%! (As a note, the Moon EX stats were regarding the stage’s initial runtime, not the recent rerun) As expected, the Friends section was filled with fiery competition, from Shion Yorigami to Hecatia Lapislazuli to A6 Sakuya Izayoi. The story cards Witch of Scarlet Dreams and Midnight Tea retained their dominance of providing Friends with Spirit Power for speedy clears, with the Fire element buffing cards Bonds of Blood and Bloody Order trailing behind. 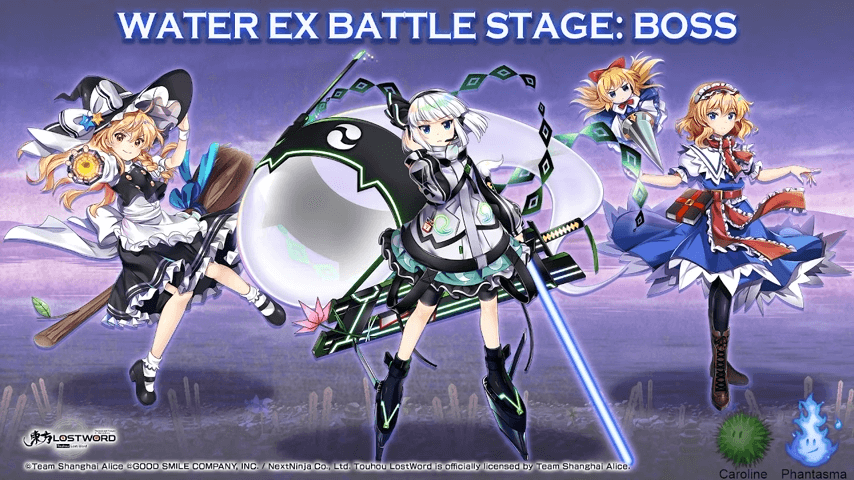 Of course, don’t forget that the Water EX Battle Stage is ongoing as well, having over a week of runtime left! Can you rust up B3 Youmu Konpaku’s engines with bursts of water, or will her magician duo-backup get the best of you? Remember to check the stage guide for any help! 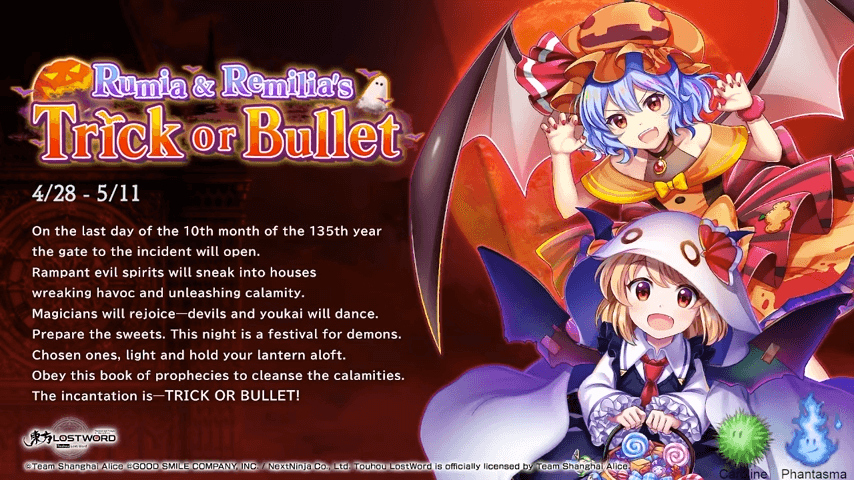 In a small twist, the next LostWord Global event will not be a brand new one, instead being another rerun! Don’t worry, I’m sure they are just preparing something bigger for the 1st Anniversary event. This time around, it’s a rerun of the Halloween event, Rumia & Remilia’s Trick or Bullet! Wait, is Rumia even a major part of this event…? Eh, don’t question it, just like how it isn’t even Halloween yet…maybe the seasons work differently in Gensokyo?

The event will last from next maintenance (April 28th) until May 11th, right before the start of the first anniversary. Remember to participate in the event to obtain several normal goodies as well as special rewards such as Rumia’s Music CD, Remilia’s Music CD, and more! 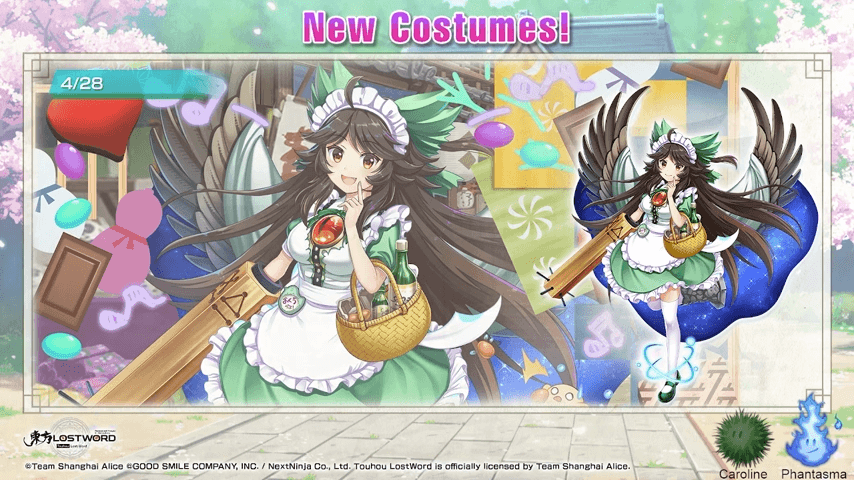 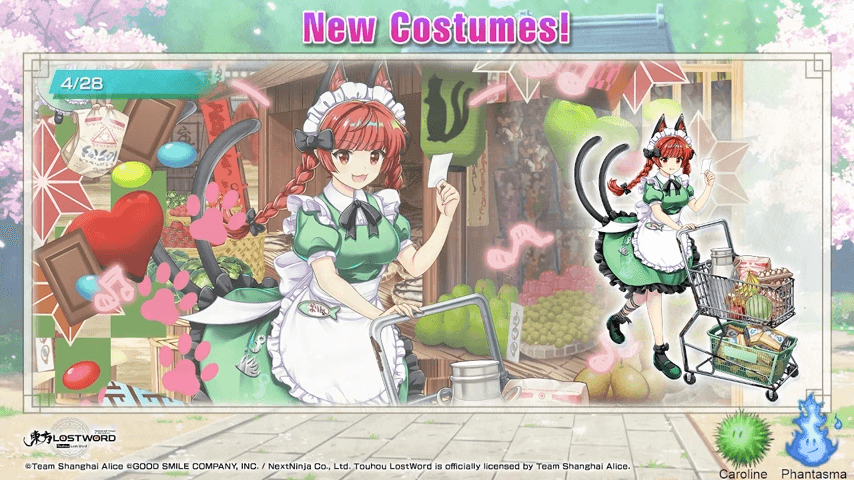 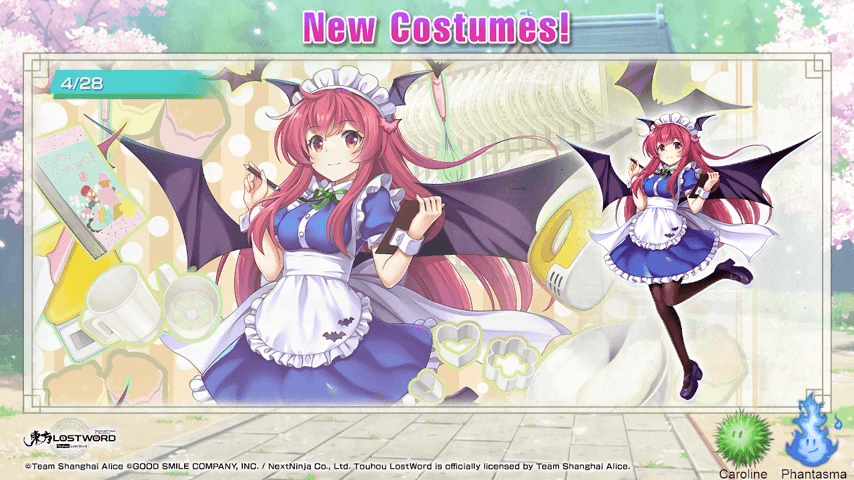 Along with everything else coming on the 28th, a new wave of 3 costumes are making their debut! No, they aren’t related to the event rerun but are instead…maids? Utsuho Reiuji, Rin Kaenbyou, and Koakuma will be getting new costumes, swapping their normal attire with some maid outfits! They will likely be part of some costume bonus in the future, or perhaps even for an Elemental EX Battle Stage? Either way, pick them up if you’re a fan!

Fantasy Rebirths for May 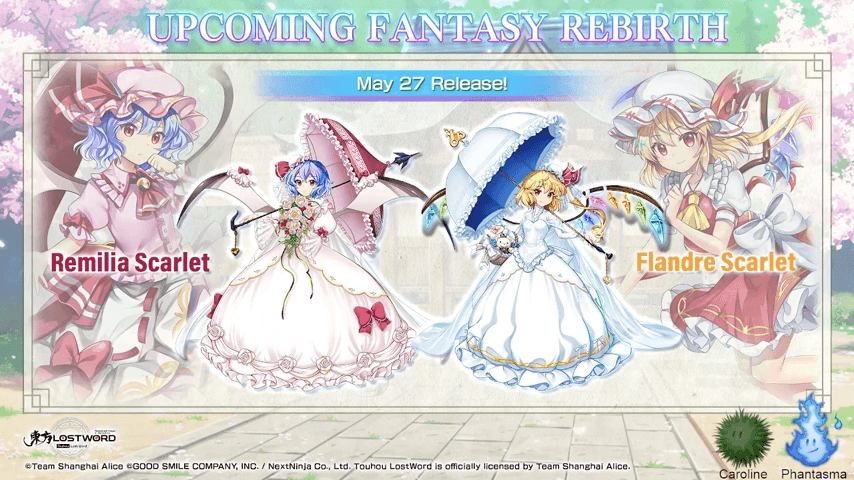 The next batch of Fantasy Rebirth has been shown off (and quite ironic too, considering the upcoming story release): Remilia and Flandre Scarlet! It’ll be a while until they are added to the game, estimated to be May 27th, but that just gives you the perfect time to max out their upgrades to prepare for their Mirror of Rebirth stages! 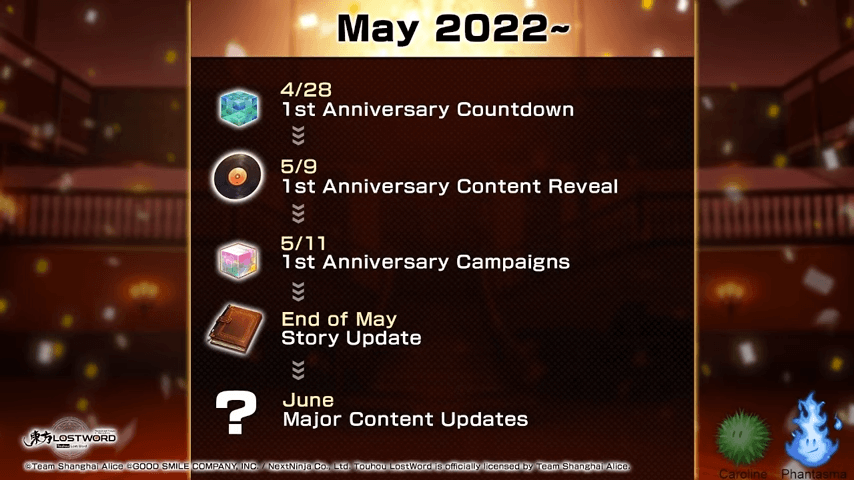 Last and definitely not least is a roadmap overlooking all of the major points before, during, and after the 1st Anniversary celebration! First, there will be a login bonus for the anniversary’s countdown as well as a reveal of content right before May 11th. From there, more campaigns will be revealed which will certainly give out great items. Lastly, there are promises of more content past anniversary, with expectations for a Main Story update come the end of May as well as more major updates in June! Touhou LostWord Global isn’t going anywhere, even after its 1st Anniversary! 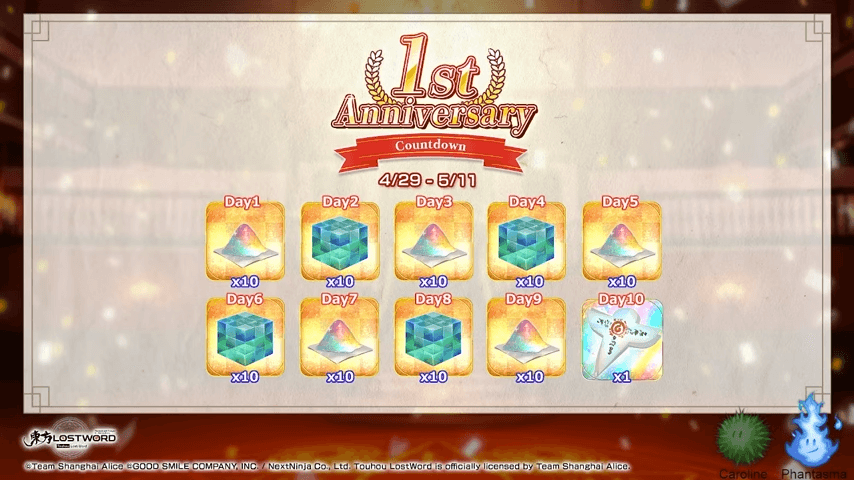 Here is a look at what will be gained from the Countdown Login Bonus. Not only is it filled with Fortune Dust and Seal Crystals, but a Divine Paper Doll on Day 10 makes this a login bonus you don’t want to miss out on!

Also, you didn’t hear this from me but…next month’s login bonus will be filled with Seal Crystals, just like what February’s looked like! 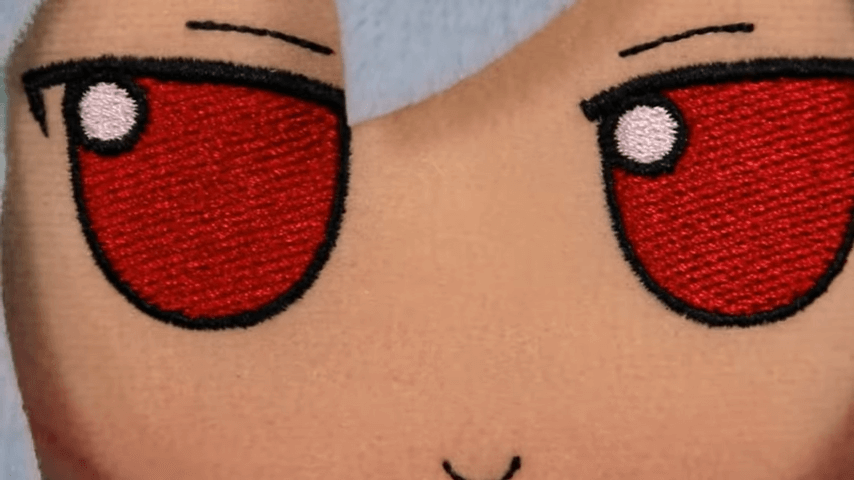 Me when the DekaFumos are finally here to take over humanity.

What are you most excited for from Dev Letter #10?

What are you most excited for from Dev Letter #10?