An Introduction to A7: The World of Perfect Cherry Blossoms 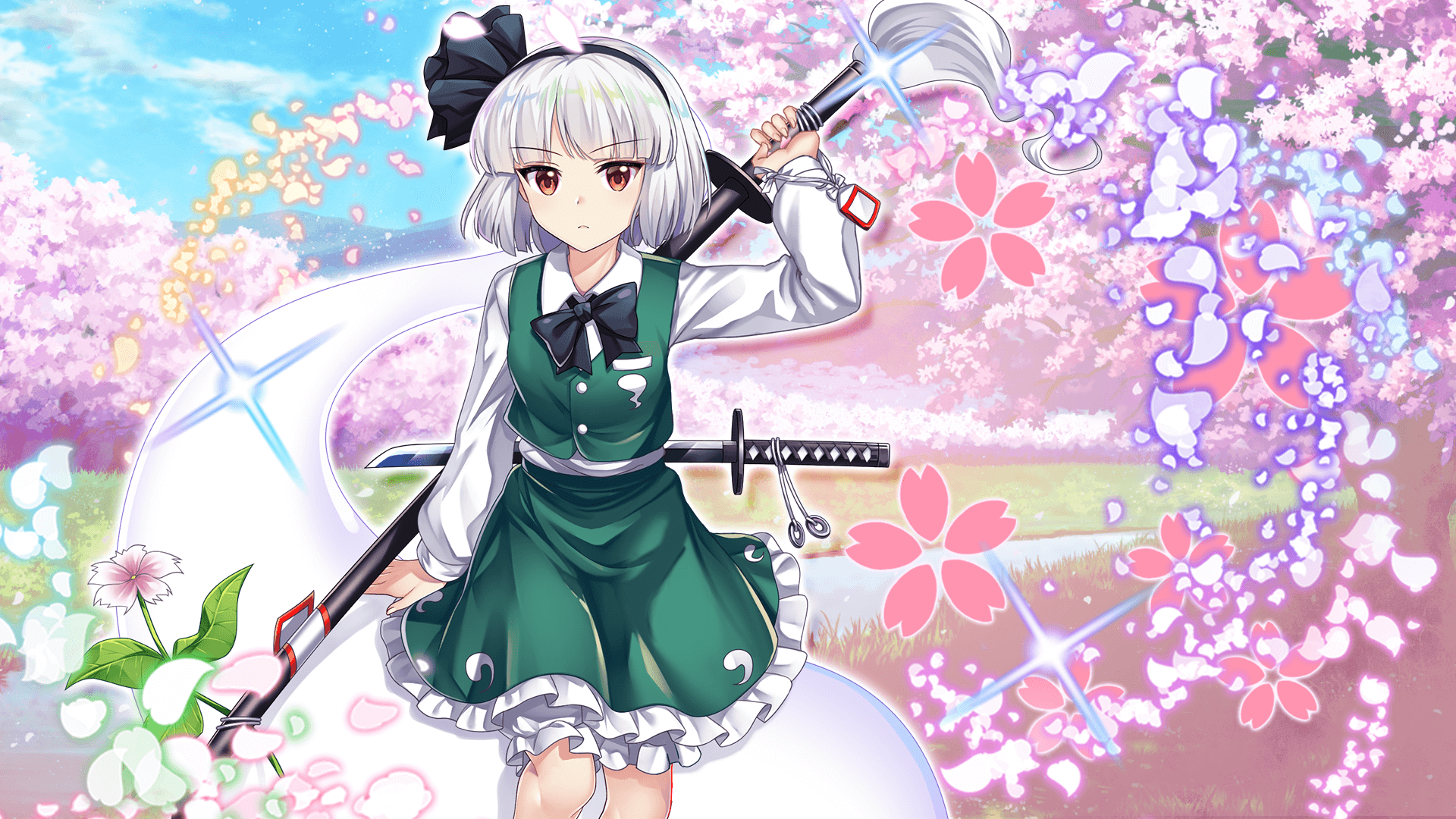 In a small twist, the next Friend that comes from a different world from the rest of LostWord’s cast originates from a game taking place before the last two alternative incidents: the world of Perfect Cherry Blossoms. Youmu Konpaku arrives from another incident from the past, this time based on the events of ZUN’s seventh main installment of the Touhou Project series: Touhou Youyoumu: Perfect Cherry Blossom (2003), usually shortened to PCB.

Just like the last three otherworlders of the likes of Sakuya Izayoi, Reisen Udongein Inaba, and Aya Shameimaru (to some extent), Youmu had more involvement with the incident of her Gensokyo than simply resolving it. She was another challenging servant that protected her master that was causing the incident, although in the future she would join the other girls in resolving incidents. Of course, this version of Youmu is unaware of her future, so why don’t we get to learn more about her own perspective? 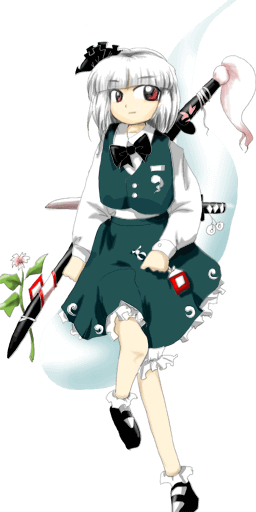 Instead of blue eyes, Youmu used to have red, amber eyes. Did she put on contacts after her loss?

Touhou Youyoumu: Perfect Cherry Blossom is the seventh mainline Touhou Project entry and the second Windows game after Touhou Koumakyou: Embodiment of Scarlet Devil. Hot off the trail of her first resolved incident, Reimu Hakurei and Marisa Kirisame are already used to how things play out: shoot danmaku at any youkai, fairy, or spirit that moves to find out what is behind the disturbance. Even Sakuya Izayoi joins the incident resolvers this time, wanting to resolve the incident before the Scarlet Devil Mansion runs out of fuel. Along with their strong assortment of bullets and spell cards, the girls can collect cherry blossoms to amass enough Cherry Points and create a supernatural border for a limited time, protecting them from a singular attack. But why do they need to collect the essence of Spring in the form of cherry blossoms in the first place?

May has already arrived in Gensokyo, and yet no Spring to accompany it. Instead, Winter has continued to rage on in the form of increasing snowstorms. Throwing the seasons off-course is already enough to imply an incident, especially with the riled-up behavior of youkai like Letty Whiterock and fairies such as Cirno and even Lily White. Hints of Spring could be seen from falling cherry blossoms, which should only be present during Spring’s bloom. The incident resolvers immediately begin to investigate, searching from the deep mountains to the abandoned village of Mayohiga. As strange as a village of cats was, the singular opponent of Chen did not have much to help with the investigation.

Hints about the incident’s mastermind are finally given by a familiar face, Alice Margatroid. While this is her first appearance in a Windows game, she actually first appeared in Touhou Kaikidan BizarreRomanticStory ~ Mystic Square, a game which involves the invasion of Makai. Unfortunately, that incident is unrelated to the current one, and Reimu and Marisa do not even seem to remember her. After a usual danmaku battle, Alice points out the falling cherry blossoms' relation to Spring and the source appears to come from above (something Sakuya puts together before Alice even finishes explaining). Traveling upwards (and after a very long stage) , the girls eventually discover a barrier between Gensokyo and the Netherworld. The Prismriver ensemble is also there, being told to perform during a cherry blossom viewing at “the mansion” and to guard the barrier. After defeating the three, the humans enter the realm for ghosts and climb the stairs of Hakugyokurou.

Youmu Konpaku finally appears here, the half-human half-phantom gardener and guardian of Yuyuko Saigyouji. The gardener term isn’t just for show though, as it turns out that she is behind the incident of everlasting winter, stealing the essence of Spring and bringing it back to Hakugyokurou. This was under the orders of Yuyuko, as she desired to bloom the Saigyou Ayakashi in the Netherworld. Putting the tree into full bloom is said to break the seal placed onto it and release the spirit locked within. Whose soul could it possibly be...? There isn’t much time for the protagonists to ponder, as Youmu is determined to fulfill her master’s orders and complete her Spring collection with the remaining Spring carried by the trespassers.

Will Reimu, Marisa, and Sakuya stop the Netherworld residents and return Spring to Gensokyo? And was that wayward cat found in the ghostly village really nothing more than a stray? 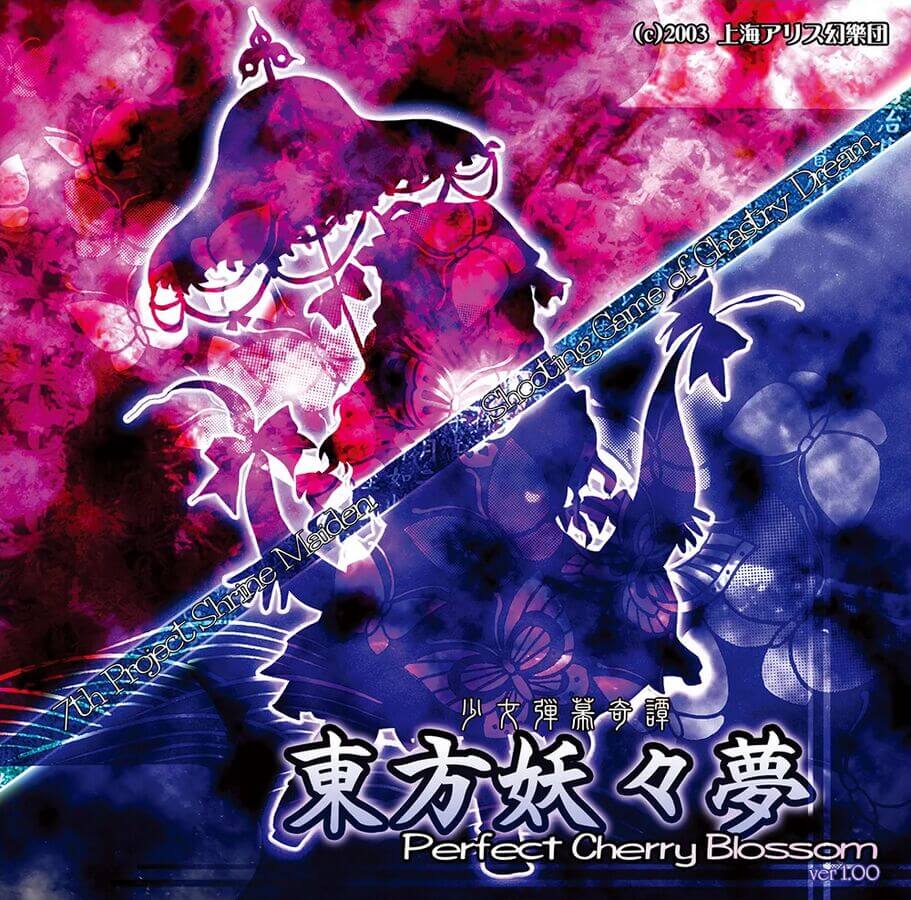 Just like EoSD's cover and unlike IN's, PCB exclusively features the extra boss instead of the final main boss.

As with any other boss character in a Touhou game, Youmu unleashes several spell cards during her battle. Not only are they referenced in her LostWord appearance, but they always look aesthetically pleasing. Here are the spells that she uses in her PCB appearance. She mainly relies on speedy sword slashes that unleash bullets of varying sizes and can even slow down time before she swings!

Do note that each spell card has 4 variants, based on the difficulty (Easy, Normal, Hard, Lunatic) chosen. However, the images shown here will be their Lunatic versions, due to being the strongest. Not entirely sure if you and I would be able to dodge them, though. 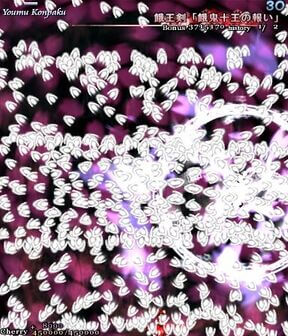 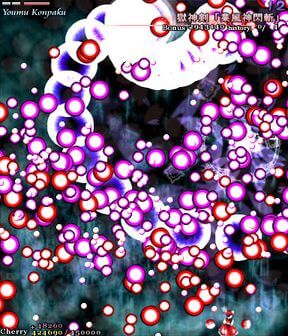 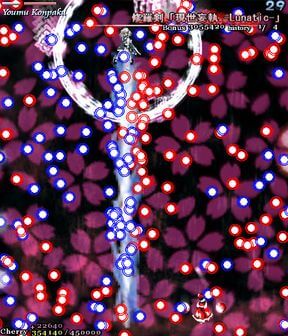 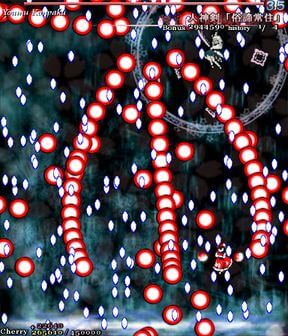 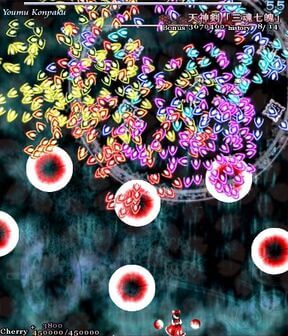 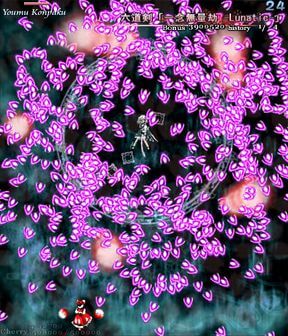 Youmu's final spell during the end of Stage 6 is a rather fun one in my opinion. She twists her own rules of slowing down time before she swings as she desperately tries to shake off the player before they fight Yuyuko. It resembles Sakuya's own desperation before confronting Remilia in EoSD.

[JP] 5* Rider Takizawa Bakin
Source: Atlas Academy Availability:…
Memorial quest free tickets thread
Post your results here! They feel way easier than last year, but free tickets! …
Do you like Castoria for her meta or personality more?
Click to view the poll. She is an incredibly popular character and without a doubt one…
WaverxReines
I know Oberon beats them both by a huge margin. Was the Debate/ Argument between these…
Busti’s Stall Diary Chapter #519 : Everyone has a mother
And we can’t seem to escape her ; she’s always there, watching over us. Artist’s…
Read More