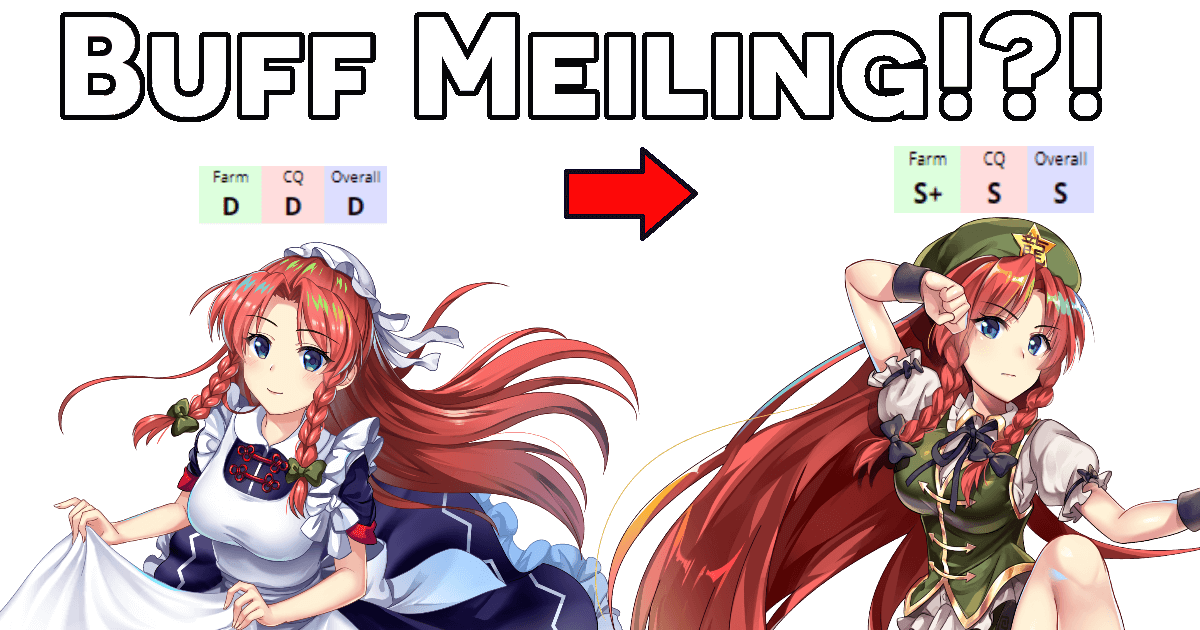 Hi friends, we heard you loud and clear, you want more news from the JP side of things, and we're here to deliver! That attention grabbing image at the start of this article isn’t just for show - Hong Meiling received an amazing buff over on the JP servers, which is heading to global as soon as possible! A rise from the depths of D tier all the way up to S Tier, on par with Ran and Yuyuko...it sounds hard to believe, but it’s true!

Let’s go over the buff to explain why Meiling’s had such a dramatic rise in power. First of all, all three of her skills were buffed: Her first skill, Martial Arts, has had 3 Levels of Yang ATK Up for 3 Turns added - a tremendous buff to her personal damage output! If that wasn’t enough, her second skill, Will of the Gatekeeper, now has its 3 Levels of Yin ATK Up for 3 Turns apply to Meiling’s allies as well as herself - a tremendous boost to party-wide Yin damage! Lastly, her third skill, Move One, Move All, has had a 50% heal added and its skill cooldown reduced - not a huge deal, but a nice bonus.

Next, her passives were also buffed, with her first passive, Qigong Master, now offering 30% damage reduction against energy bullets which is mostly irrelevant. Her second and third passives, Outer Force Response and Inner Force Response now have a 50% success rate (each gives 1 Level of Yang or Yin ATK Up for 3 Turns respectively), which typically won’t be the most relevant but can occasionally help you force your way past tough fights.

Her character ability was also buffed, adding an immunity to burn and poison. This isn’t really a meaningful buff to player-side Meiling, but will make her slightly more annoying to fight as an enemy, so watch out for that.

Next up, her attacks received some massive buffs. Starting off with her Basic Shots, her Spread Shot, Colorful Rain, had 2 Star breaks added at 3 Power - something of a last resort, but useful in a pinch. It also now has Fairy and Phantom Killer on the first 3 bullets, as well as a chance to increase Yin ATK by 1 Level on the first bullet.

Her Focus Shot, Fragrant Wave, now has 1/1/1/3 Earth Breaks at 0/1/2/3 Power - and if you’ve done any of the Scarlet Devil Tower, you’ll know how potent 0 Power Breaks are! The 1st and 2nd Bullet also now have Sure-Hit, the first 3 Bullets all have Beast and Youkai Killer, and the 1st and 3rd Bullet now have a chance to raise Meiling’s Yang ATK by 1 Level.

Her first Spell Card, Rainbow Sign: True Intense Rainbow Fist, now offers 0/2/2/3 Star Breaks at 0/1/2/3 Power. Additionally, the Pre-attack effects on the Spell Card now scale with Meiling’s Awakening level - up to 2 Yin DEF and 4 Yin ATK Up at max Awakening! Next, the 1st and 2nd Bullets now have Youkai Killer, and the 3rd, 4th, and 5th Bullets have Magician Killer. Finally, the 4th, 5th, and 6th Bullet now have an unknown amount of Hard scaling.

Her second Spell Card, Qi Sign: Earth Sky Dragon Kick, now offers 0/2/2/3 Earth Breaks at 0/1/2/3 Power. Additionally, 4 Levels of Yang ATK Up have been added to the Spell Card’s Pre-attack effects. To add to this, the existing Hard scaling on the Spell Card was increased by an unknown amount. Finally, the 1st, 4th, and 5th Bullet now have Human Killer.

And finally, the most important part of most character’s kit is the Last Word, and Meiling’s got a huge buff. Crimson Earth-Shaking Star Pulse has had a number of improvements. Firstly, it now provides 0/1/2/2 Star and 0/1/1/2 Earth Breaks at 0/1/2/3 Power - a fantastic distribution, as it makes it more likely to hit weaknesses when you need it to. Additionally, it also buffs her own Yin and Yang ATK by 2 and 3 Levels respectively for 1 Turn, to help further magnify her output. She also has a nearly guaranteed 1 Level of Accuracy up on the second bullet, which offers her some flexibility for Story Cards when damage output is a concern and not consistency. But perhaps the most ludicrous part is that the Hard scaling has been bumped up massively, which combined with all of the other buffs leaves her matching Yuyuko for turn 1 damage, although she can’t quite match Yuyuko’s 3 Power output without some additional setup. There’s also some Tengu and Incident Resolver Killer on the 2nd, 4th, and 5th Bullets now, which can situationally make her damage output absolutely absurd, though those are rather narrow Killers.

Overall, as you can see Meiling had a tremendous amount of power added to her kit - enough to make her a S Tier Friend once it drops in global. Might want to start leveling her up in the next event ahead of time, so she’s ready to Max Limit Break when it hits!