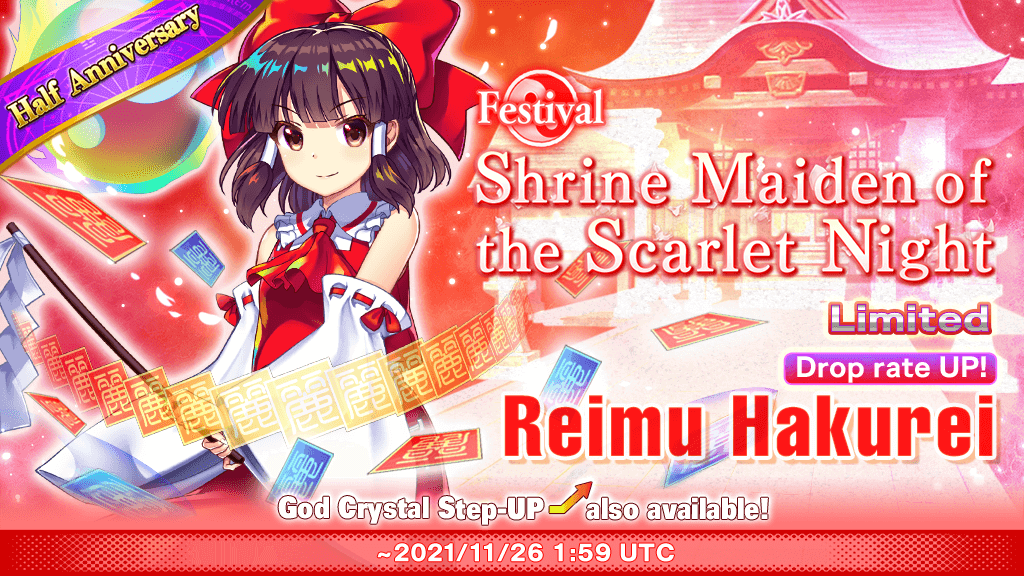 If you're looking for a high powered All targeting attacker with some Accuracy and Yang Hard support, or perhaps you're just nostalgic for the older touhou games, you may be interested in this banner. Reimu Hakurei (Scarlet)'s a strong unit on par with recent Ultra Festival units, but without the extra spark cost or divine dollls - though as always, power should be a secondary concern to your favorites. In particular, whilst this Reimu is extremely powerful, she's got nothing super special or unique going on, so she's by no means a must-have. Unless you love Reimu of course, in which case absolutely grab her. This is a Festival banner, and as such Reimu Hakurei (Scarlet) will not be added to the general pool after this. Get her now or wait for a rerun.

Please note: Reimu Hakurei (Scarlet) is reliant on a Story Card that is dropped by a stage in the currently unreleased Chapter 3 Act 3 stage. Until it is added to the game (and you, the player, farm up a copy), you may find her damage potential doesn't quite match what JP players may demonstrate. She's still very strong, just not as strong as she'll be with that Story Card. 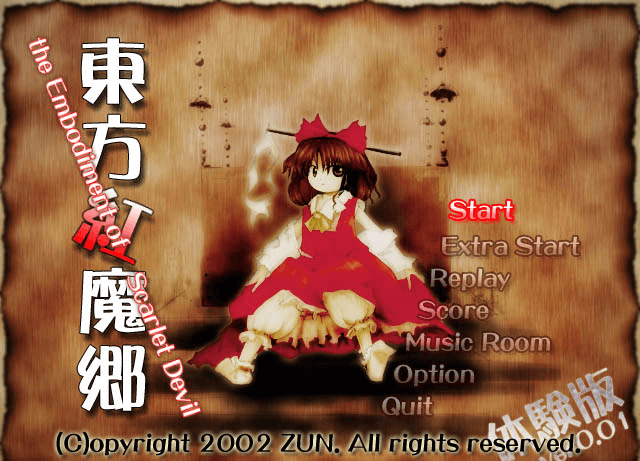 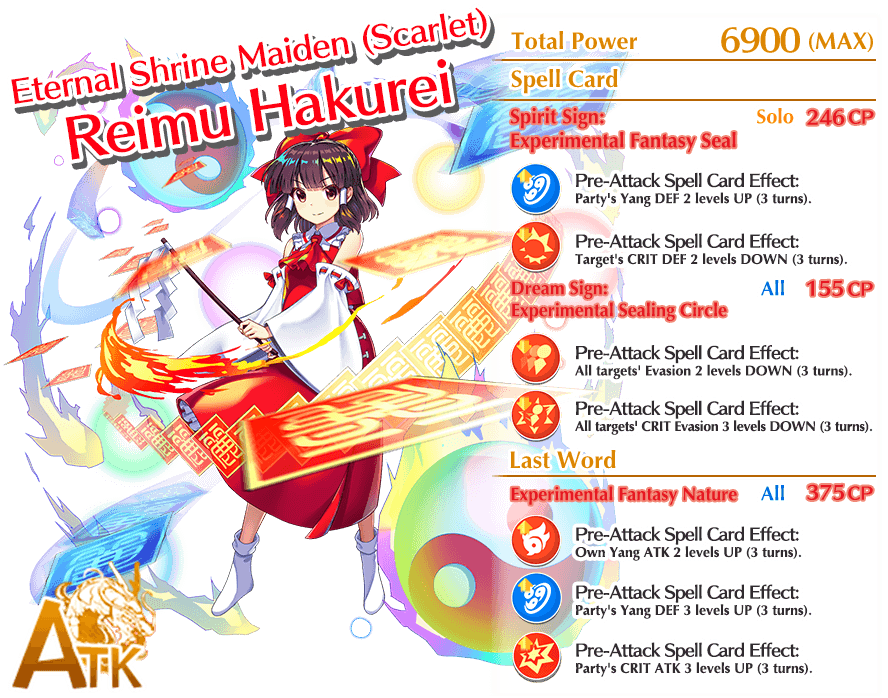 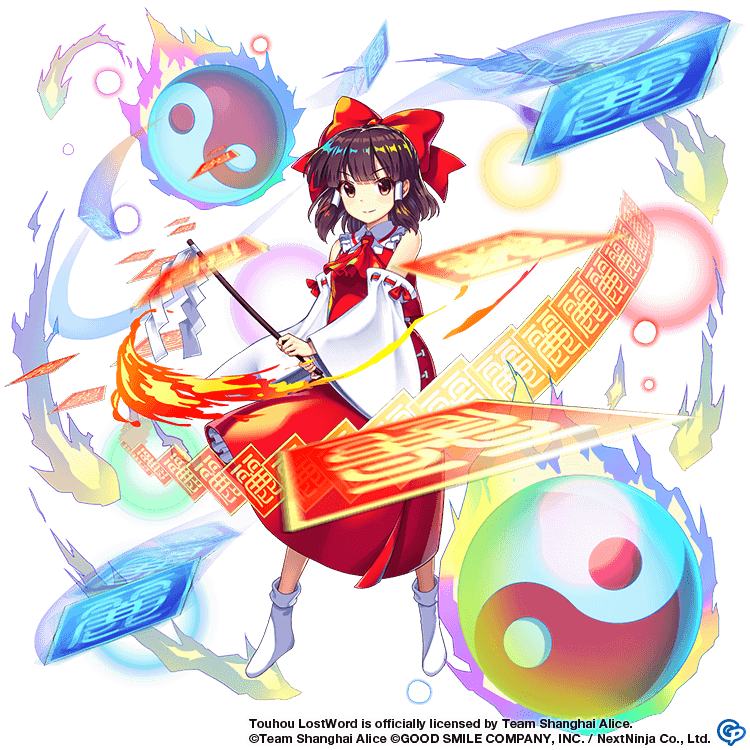 In the game Embodiment of Scarlet Devil, released in 2002, the world was introduced to the modern version of Touhou Project. Whilst the first five games were college projects by ZUN, the creator of the series, this sixth game was the start of Touhou as a professionally sold game series, which would lead to it becoming a massive franchise. In that game, the vampire Remilia Scarlet blanked Gensokyo in a smothering scarlet mist, to blot out the sun so that she could go outside without a parasol (and really, for kicks and to get some attention too, that’s half the reason for most incidents). The shrine maiden Reimu Hakurei rose to stop her, with the newly created Spell Card rules, and it’s from this point in time that this Scarlet coated Shrine Maiden hails from. She’s the first in what one could consider a retro series of Festival units, which all hearken back to their older appearances.

For starters, let’s take a look at the fledgling incident resolver’s skills: For starters, her character ability gives 1 level of Yang ATK up for 1 turn to the whole party whenever Reimu boosts. Yin-Yang Orbs is your usual self-buff, giving 0.75 Spirit Power UP and 2 levels of Yang ATK UP for 3 turns to Reimu. Additionally, Tiny Purification Rod grants a further 0.75 Spirit UP as well as 3 levels of Yang DEF UP for 3 turns to the whole party. The two combined means Reimu gets two Spirit Power on turn 1, which is effectively 2 Yang ATK up for the whole party. Lastly, Divine Power grants the entire party 2 levels of Accuracy UP for 3 turns, as well as Reimu herself Charge, to make sure she moves after your debuffers. She also has Power Link, which while somewhat in abundance these days is always nice to have.

For attacks, the shrine maiden flies with grace. Her Spread Shot, Homing Amulet, gives her access to a repeatable 0P Solo targeting Wood Break, with perfect accuracy. Spirit Sign: Experimental Fantasy Seal gives her entire party 2 levels of Yang DEF UP for 3 turns, a single target 2 levels of CRIT DEF DOWN for 3 turns (though this may be hard to make use of as Reimu doesn’t fit super well in CRIT comps), and 4 Wood and 2 Sun Solo targeting Breaks at 3 Power - which will usually be a somewhat above average 4 Breaks with flexibility to do 2 Breaks to a Sun weak target instead, but will rarely be 6 whole breaks. Dream Sign: Experimental Sealing Circle further boosts her Accuracy support, by inflicting 2 levels of Evasion & CRIT Evasion DOWN for 3 turns, alongside an above average 1/1/3/4 All targeting Sun Breaks for 0/1/2/3 Spirit Power. Both Spell Cards also have high damage potential for Arena, with Dream Sign: Experimental Sealing Circle being particularly noteworthy for having a mix of Accuracy Support and All targeting damage (with 60% Hard scaling on the first line), great traits for the multi-wave Arena.

Finally, her All targeting Last Word, Experimental Fantasy Nature, is a potent enough final blow to end any incident. With a 1-3-1 layout complimented well by the Spirit Power UP in her skills, 80%/80%/100%/0%/0%/120% Hard scaling, a wide range of Killers (most notably Youkai), and 3 Wood plus 3 Sun Breaks, 2 Yang ATK UP for herself, as well as 3 Yang DEF & Crit ATK UP for 3 turns for her party, it’s a top class Last Word. The only real fault it has is that her Best in Slot Story Card is not yet out, and you’ll have to wait for Chapter 3 Act 3’s release for it.

Overall, this Scarlet Shrine Maiden is a great unit, and is an especially good pickup if you’re looking for a powerful miko but don’t quite want to go for a Ultra Festival unit, with their higher spark costs and requiring Divine Dolls. 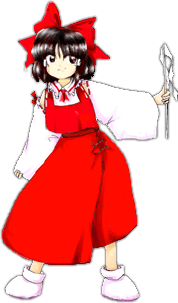 That's odd. The mist is gone. Did somebody resolve the incident already...?