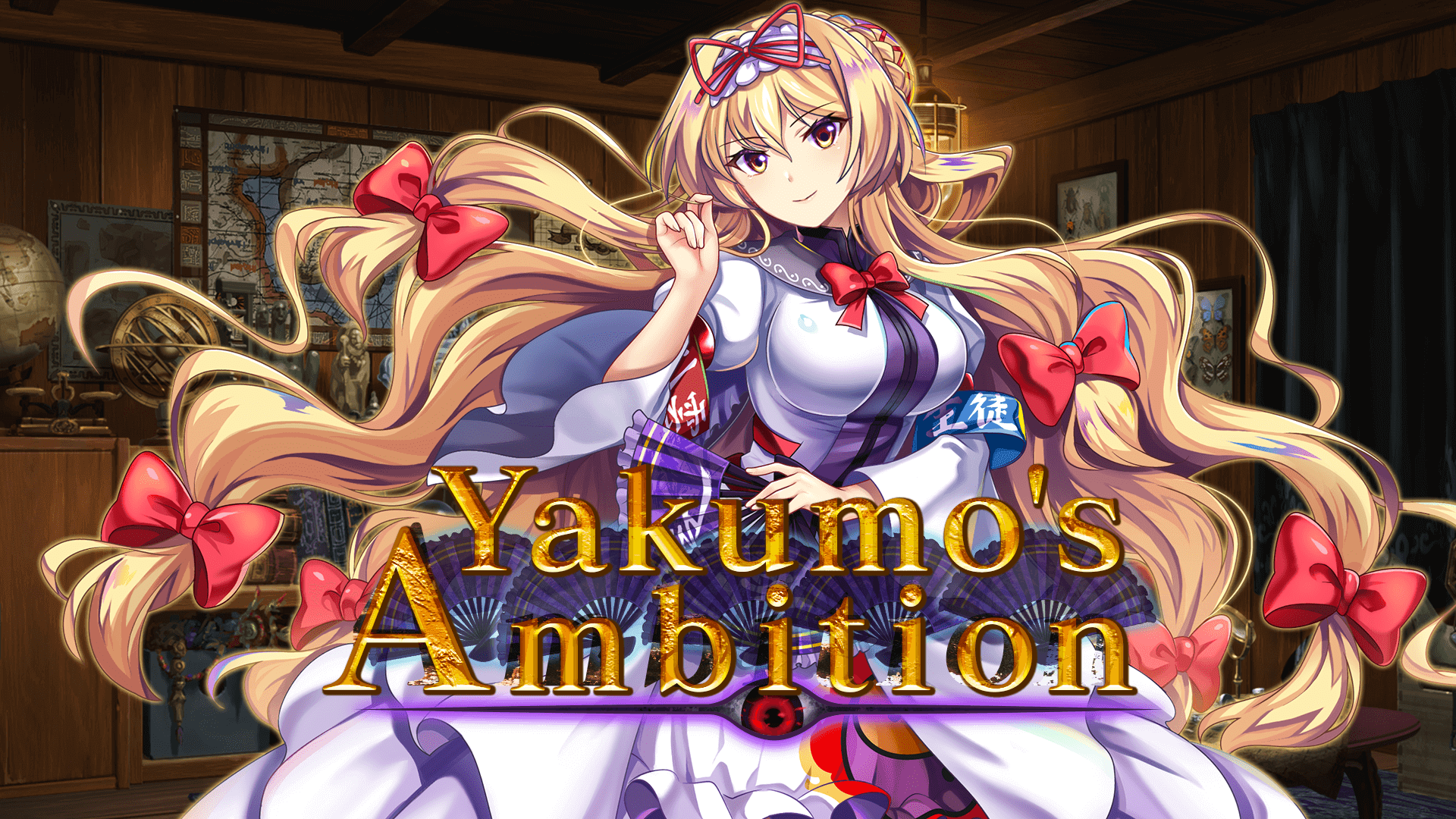 It's time for a game...within a game?! Of course, the characters don't know they're already in a gacha, so no need to overload their minds with overwhelming news...but nevertheless! We take a return to Gensokyo Isle from Chapter 1 of the Main Story, in which the Yukari Yakumo of that world has created a VR-like game (played on retro consoles, somehow...) to occupy all of the returning characters while the world repairs itself. Unfortunately for her, it seems like an unknown intruder has made their way into the game, stealing Yukari's avatar and forcing her to reside within your journal. Will this mysterious, hacker-like force turn this peaceful simulator into a killing game??!! Or...just keep the same, school-like competition theme? Either way, it's up to us and the Yakumo Student Council to get to the bottom of things while obtaining all foes' EXP and item drops!

Every event in Touhou LostWord comes with exclusive Music CDs, Story Cards, and other unique event-only items for players to collect. Additionally, every stage plays with the theme of the event and names every opponent in a unique manner for every difficulity! For the sake of preserving these limited-time items and content (which only will reappear in event reruns), this article will mainly cover the names of every foe met while providing extra notes at the end. A small story synopsis will accompany each section to contextualize the reason you fight certain Friends, so expect event story spoilers as you read ahead. It should be expected, given the identity of the final foe is basically spoiled already.

And one more extra detail! The title of this event, Yakumo's Ambition, is slightly different from its original translation in JP. The original title was "危機開会," which when spoken aloud sounds similar to "Kiki kaikai," an old shoot-em-up with a character who may look very similar to Reimu...

The main stages of the event seem to contain references to several real-life games as well! Try spotting them all as you progress in the event, either through playing or reading here! 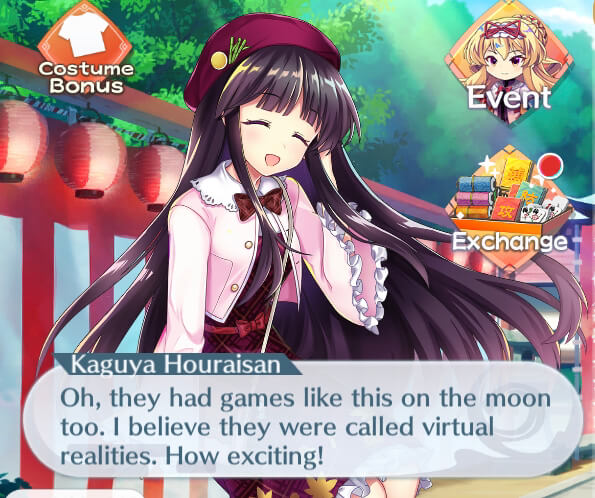 Before entering the world of this virtual siumlator, Yukari assigns you to fight off the physical members of her student council! This is to introduce Yukari's ability while in the journal: anyone that you fight and beat gets recorded in the journal, describing their role and some pretty embarrassing facts about the council member. After being teased by their own master, the Yakumo Student Council begins to make their move, being stopped by the mysteirous Kasenman and Fairy Adventure Club on the way to their destination: the Scarlet Devil Mansion. The Reimu Hakurei of this world (remember, this is not L1 but instead the school universe) ends up challenging the Yakumo Student Council in a battle for the MC, although most of the Hakurei Student Council seems pretty bummed out to fight...

The Yakumo Student Council enters the mansion, only to find them immediately surrounded by the residents wearing...radically different clothing? It seems like one main theme from this event is that all of the opponents prefer wearing different event costumes from the past, utilizing them to create various club themes. After defeating them, the council gives chase to Remilia, hoping to create an alliance to make figuring out what was going on easier, but Kasenman returns while harshly judging Flandre's morality. Remilia is found shortly after, but Youmu and Yuyuko suddenly appear in her room, as it appears that a hole to the Netherworld is right under Remilia's bed! A side-effect of the island restoring seems to be gaps between various locations in Gensokyo. But hey, that should make sleepovers a lot easier at least! 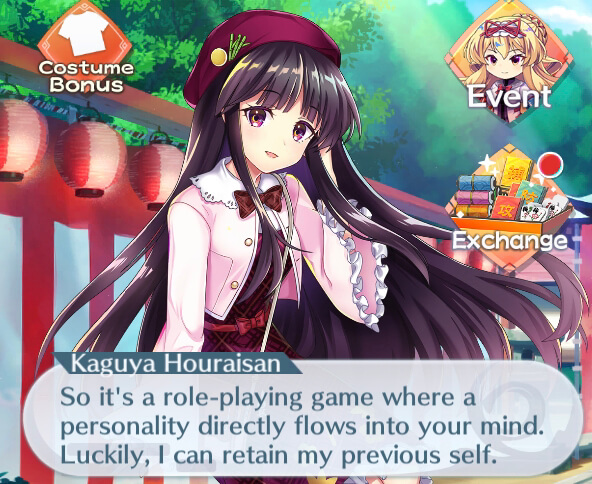 Yuyuko offers to help her friend Yukari in resolving this minor incident, but once she invites the council over to the Netherworld, they are assaulted by the...bunny club? While they are cute (and plentiful), the Yakumo Student Council refuse to give up the MC and continue on their travels. While Kasenman has found her ally of Okinaman RX, the more important side-encounter this time is the appearances of Fujiwara no Mokou, Kaguya Houraisan, and Keine Kamishirasawa, wearing weird clothes and speaking in even stranger accents! While suspicious for sure, the group focuses on reaching Eientei to ask for help from the council of Lunarians. While the enemy council makes it difficult to reach them, a pep talk from Chen is more than enough to motivate the trio into meeting up with the Eientei Council and battling once more over the MC. It seems like this group also is composed of fans of Eirin Yagokoro....

After making an alliance with the Lunarians, the group finds themselves within an arena surrounded by a Grassroot Youkai Network (no, not the actual one, just an impostor...) along with many other cheerleader Friends. They escape their wrath admist the chaos, getting into some scuffles with Momiji's and Hatate's clubs on the way to their next location. Their location in question is the Nemunoki, in which Suika has been forced to serve as a waitress while other familiars attend the restaurant. These attendees include club spies who have valuable information regarding the incident, but that info is delayed by sudden news about trouble at Moriya Shrine! Another allience is planned between clubs while Kanako Yasaka leaves to check the shrine, but before the Yakumo Student Council could leave, another fight over the MC ensues... 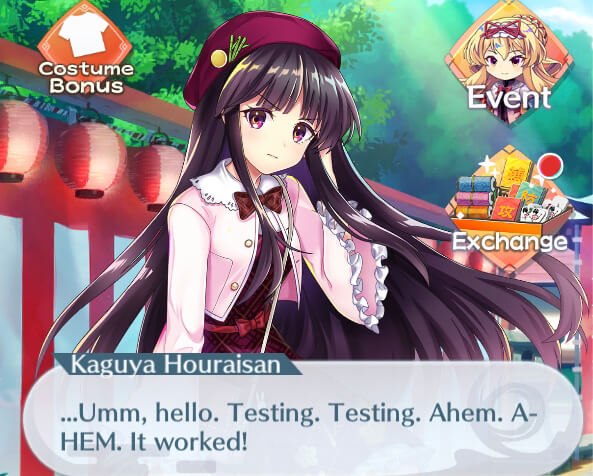 The trouble at Moriya Shrine turned out to be Fujiwara no Mokou, who is seen setting the shrine abalze while the Yakumo Student Council spies on the scene. Sanae Kochiya quickly hypothesizes that the fire is a fake and the shrine is actually not on fire, to which the Impostor Mokou compliments the human god for figuring out. This doesn't stop the fire from driving everyone on the scene to insanity, forcing them to fight the Yakumos while Mokou escapes. After resolving the issue, they pursuit the suspect while passing through Nitori's club and Hina Kagiyama, still determined to provide her energy drinks to anyone passing by. Mokou accidentally traps herself within Kasenman's secret hideout, to the point that she can't even tell if she turned everyone around her insane. The MC's group is able to take advantage of the confusion to finally catch up and at least fight Mokou, even if she escapes in the end.

Trouble is soon found elsewhere thanks to the other suspicious imposters. Kaguya Houraisan is found messing with Old Hell, specifically the Komeiji sisters and Yuugi Hoshiguma. After a small skirmish there and meeting up with other student councils wandering through Old Hell, the crew exit out and find themselves at Myouren Temple. Fortunately for them, the third trouble-maker is found here as well, messing with the temple's residents before making a hasty exit. After settling the frenzied Buddhists, Yukari Yakumo decides enough is enough and makes an announcent to meet at Yukari's office for the final confrontation. 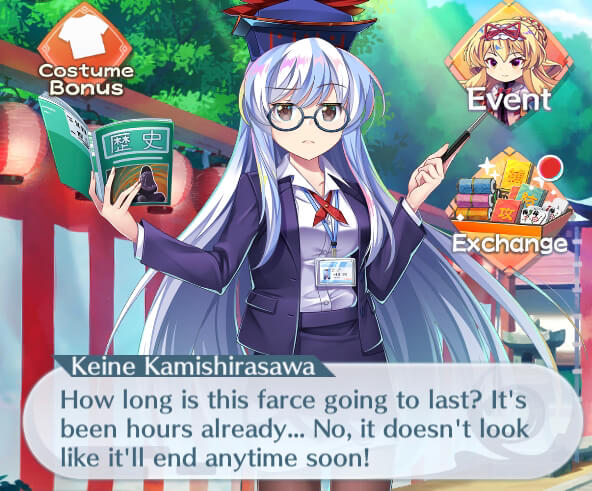 Reimu Hakurei, Marisa Kirisame, Sanae Kochiya, and Reisen Udongein Inaba (who you might recall as the incident resolvers of another incident...) meet up outside the office along with the Yakumo Student Council, prepared to face the imposters and their boss. As it turns out, the identity of both were the same: Hecatia Lapislazuli! She stole Yukari's avatar, in which she changed back to her old self with help from Rinnosuke Morichika, and placed her other consciousness into the imposters in an attempt to take over this world...but why? To make her own film for the people of Hell, of course! Movies and games are pretty similar to themselves nowadays, no? Hecatia is quick to make the final fight harder on the MC, overloading the journal with game data in an attempt to forceibly log out the incident resolvers. Will the MC be able to stop her before they go Hollywood?!

The movie is created anyway, though this time after surrendering the virtual world to Yukari and with consent from Mokou, Kaguya, and Keine. This doesn't mean that the filming process goes smoothly though, as Hecatia has decided that the best movie for Hell is a romcom filled with action and love triangles! The three actors try their best to perform, but the situation is so insane that they inevitably crack, forcing Hecatia to perform her punishment: Acting Class! Think of normal class, except it requires the MC to beat up the students in battles of bullets. Why are we consenting to this anyway...? 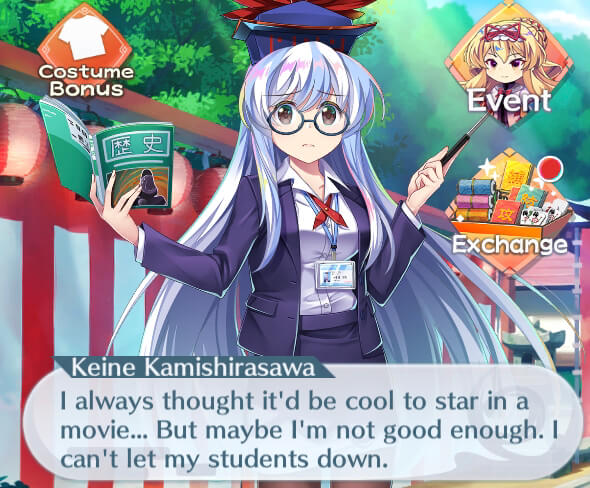 Event Points from the Yakumo event. The Event P is marked with chalk!

Normal Event P: Points dropped by participants in the Great Student Assembly...Points? This isn't a game!
Rare Event P: Strangely-shaped boxes that have been buried in various places. There's a reward for collecting them. 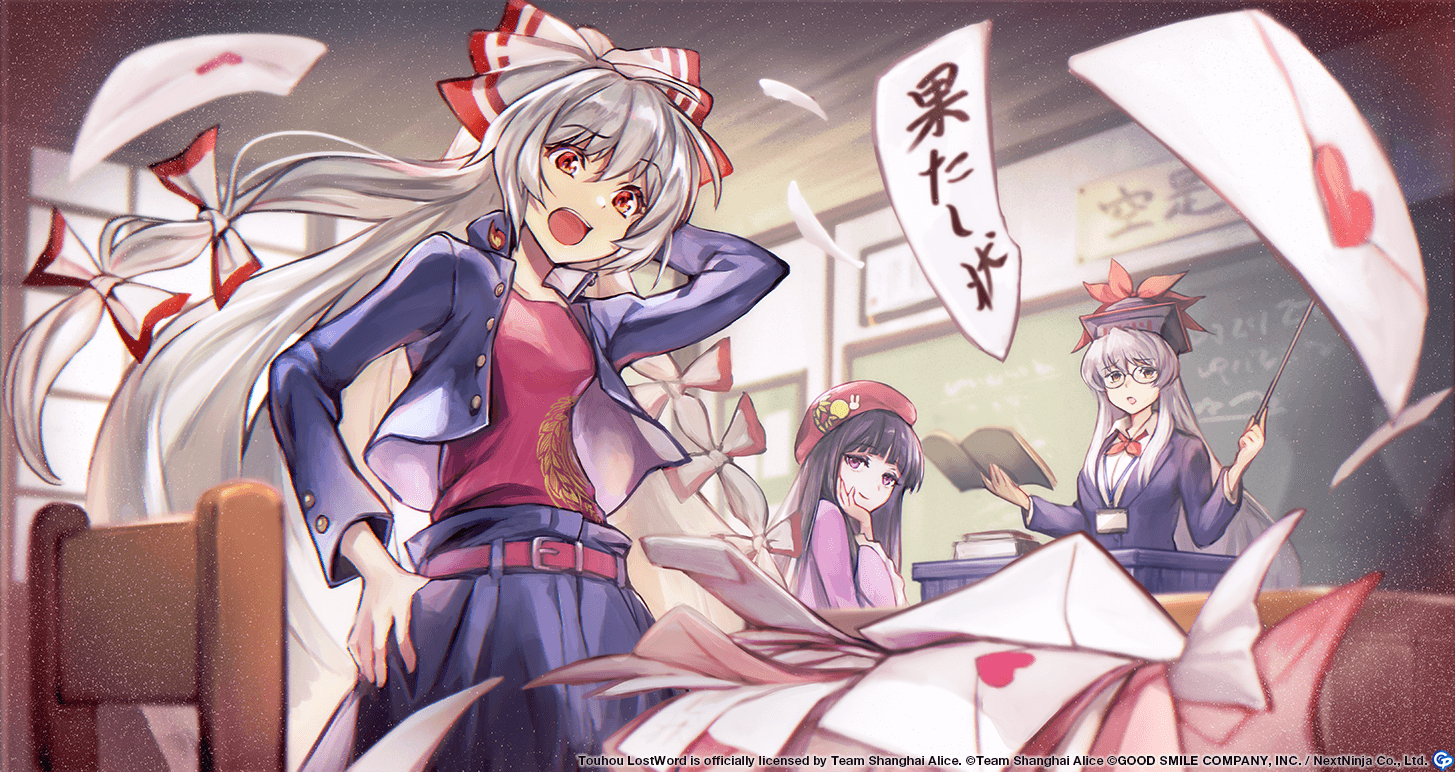 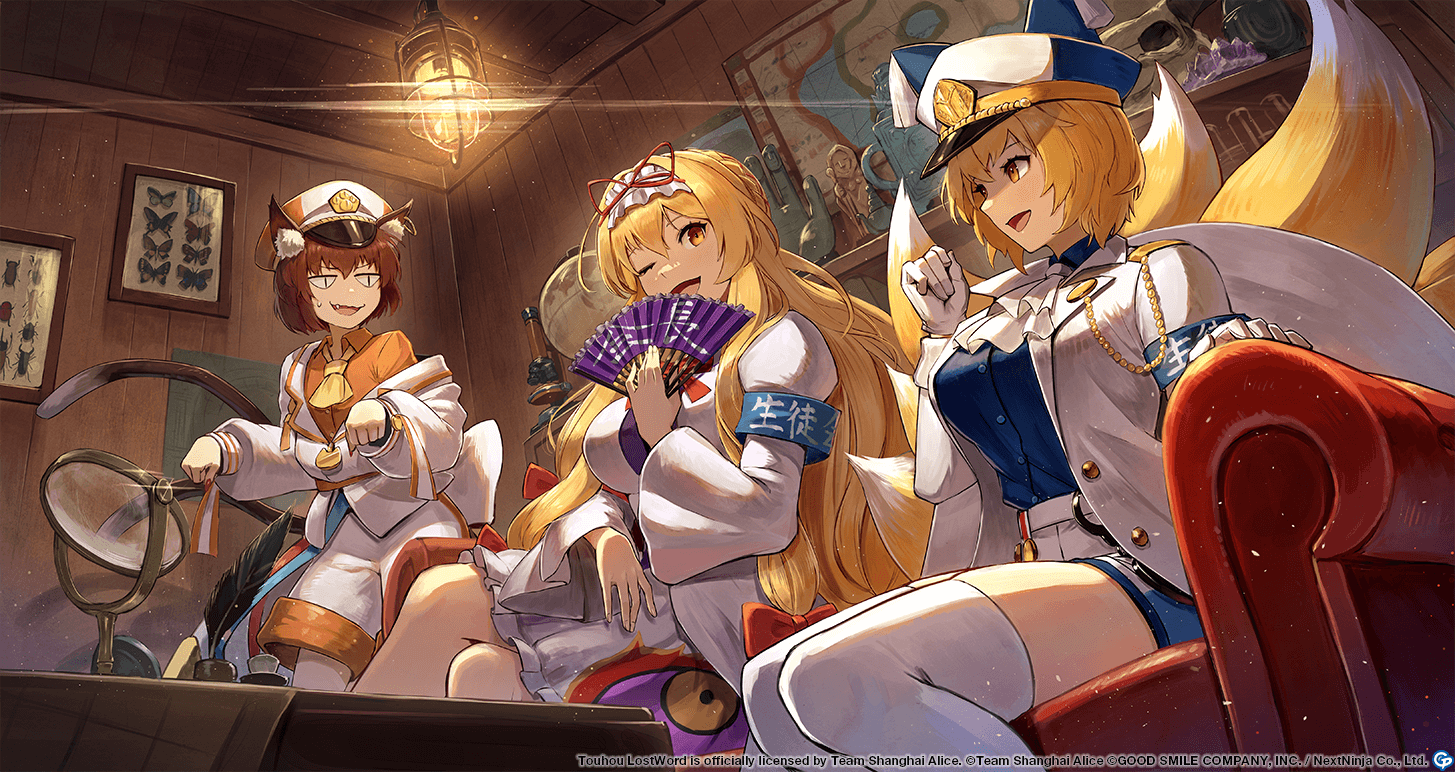 Additional Note: Why do the listing of generic stages and Episode numbers go from 9 to A or other letters instead of going to 10? This is a reference to specific codes, in which over 10 (0-9) digits are required, in which letters are used to represent numbers larger than 9. For instance, A would be 10, B would be 11, and onwards. This is usually seen in 16-Bit, or Hexadecimal, coding. 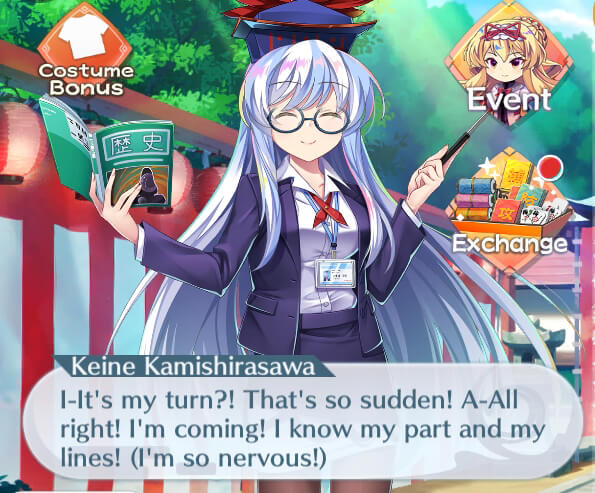