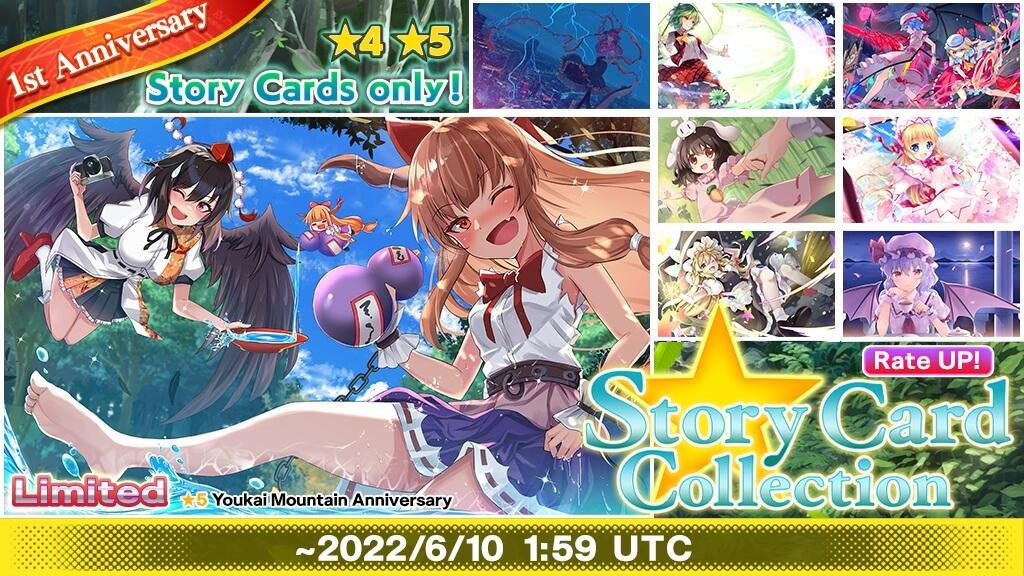 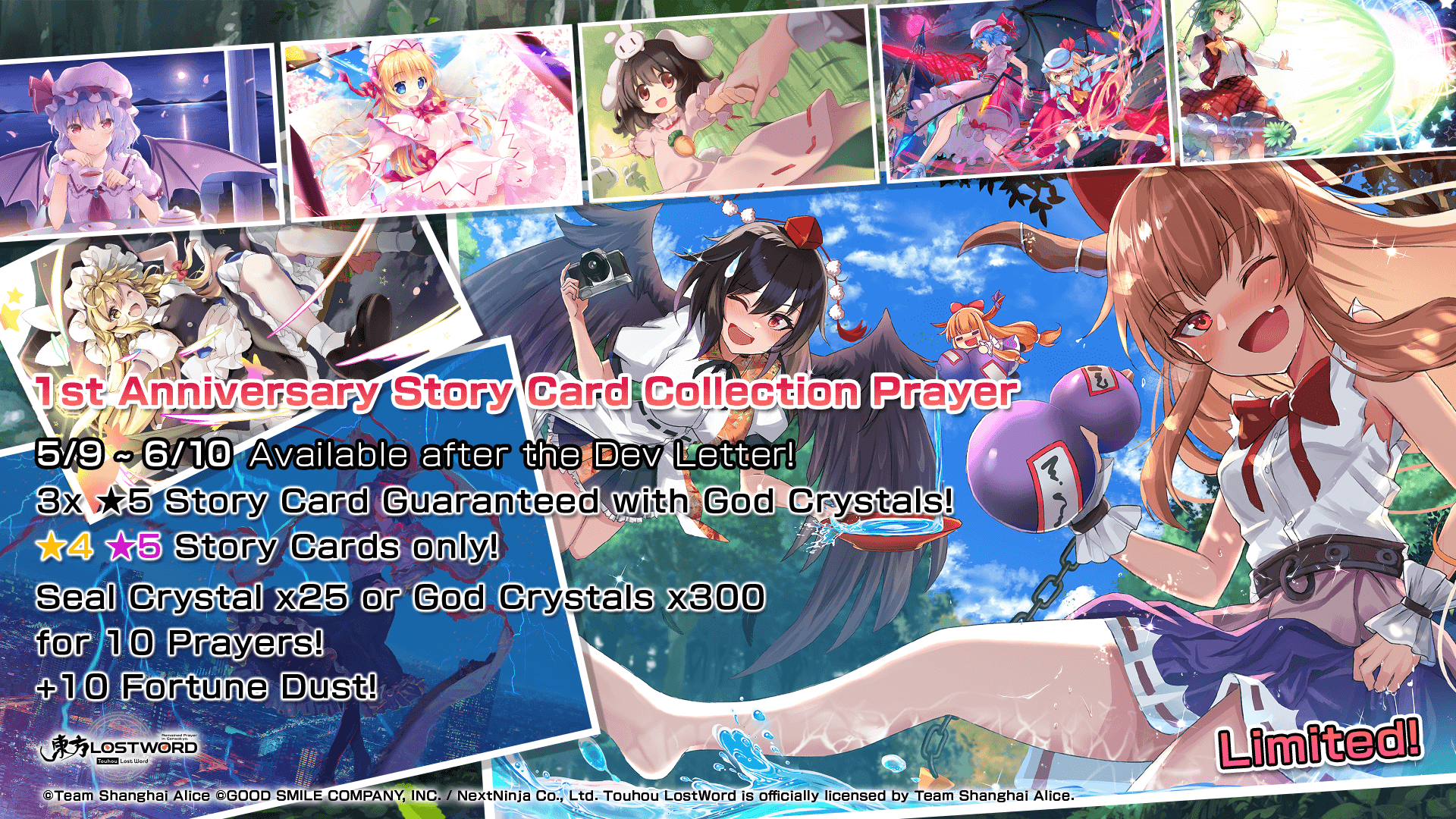 Maybe, almost leaning toward Yes. It’s difficult to truly say “Yes” or “No” for this type of special prayer, the reason being quite clear. You’re not pulling for the chance of a new or limited Friend, but instead going for…story cards? Newer players especially might find this prayer as a whole strange, as are Friends not the most important thing to spend your currency on? However, never underestimate the power of a good story card, especially the featured and limited Youkai Mountain Anniversary.

There are only 4* or 5* story cards available, but this likewise means no 3* story cards to ruin your day. Along with that are a grand total of 8 featured story cards. On the 4* side, we have Midnight Tea, It’s Spring!, and Rabbit of Good Fortune. For 5*s, there’s the previously mentioned Youkai Mountain Anniversary, Bonds of Blood, Overwhelming Firepower, Ordinary Magician, and Protection of Cerpinus. All very good cards, even for the 4* side of things!

Still, before going into the importance of story cards, it’s important to acknowledge the other co-running prayers. This banner is in a weird spot, as it lasts from May 9th until June 10th, giving you a lot of time to consider spending on it. However, this just means any prayer that runs along it with Friends you might want to make it difficult to devote yourself to this. Immediately coming up is E1 Flandre Scarlet, with A7 Yukari Yakumo and Alice Margatroid soon following up. This is not even mentioning the 1st Anniversary Lucky Bag, Lunar War Ultra Festival Collection, or Festival Collection, the last one especially running along this prayer for quite some time.

The important truth about this banner is that you don’t need to dedicate so many resources into it, thanks both to the lower exchange rate and cost. Remember, 4* cards cost 30 Exchange Points to obtain a copy of and 5*s only need 50! If that didn’t sound promising enough, the crystal cost on this prayer is halved, meaning only 25 Seal Crystals or 300 God Crystals for a 10-pull. On top of that, God Crystal 10-pulls promise 3 guaranteed 5* cards! This prayer is a very good way to get some easy copies of strong story cards if you have the buffer for them, but why are they so good? 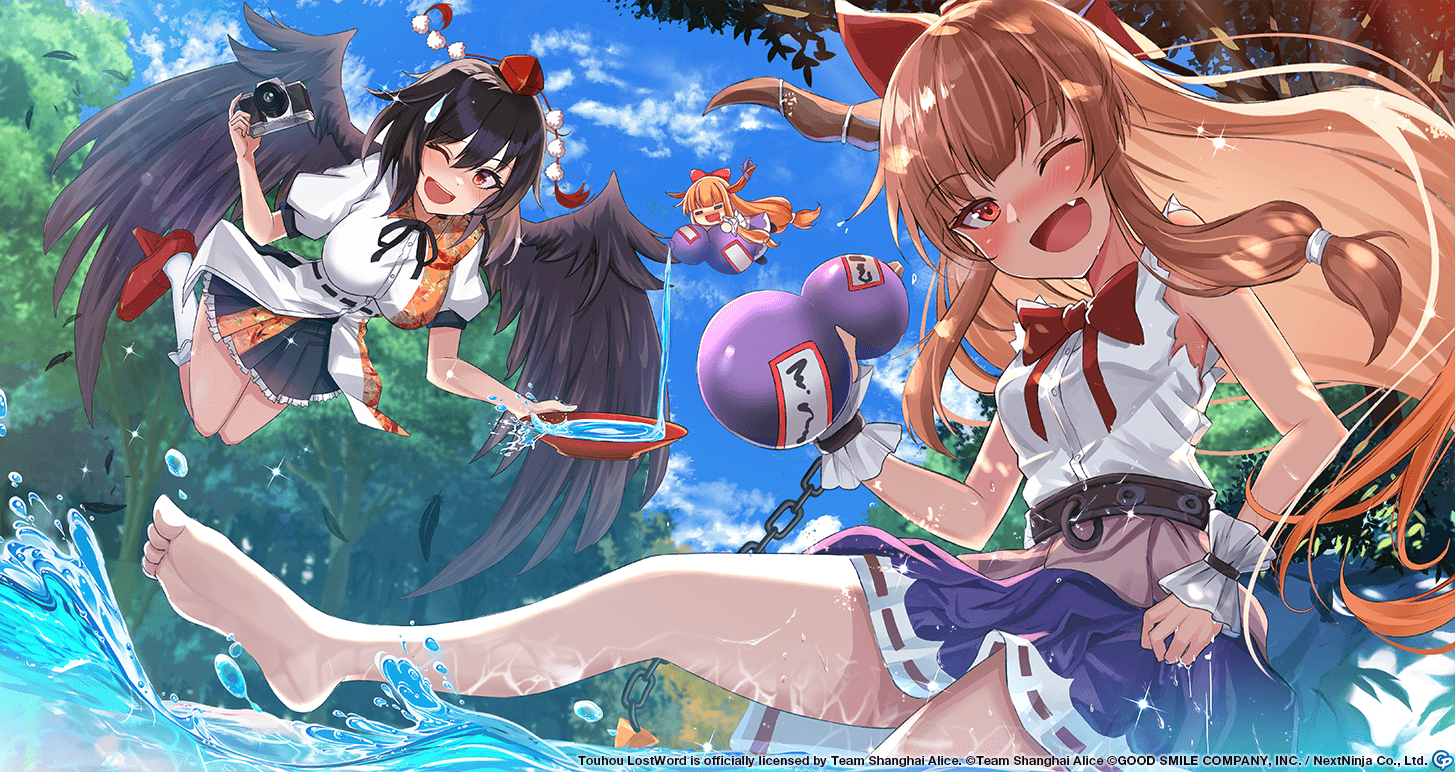 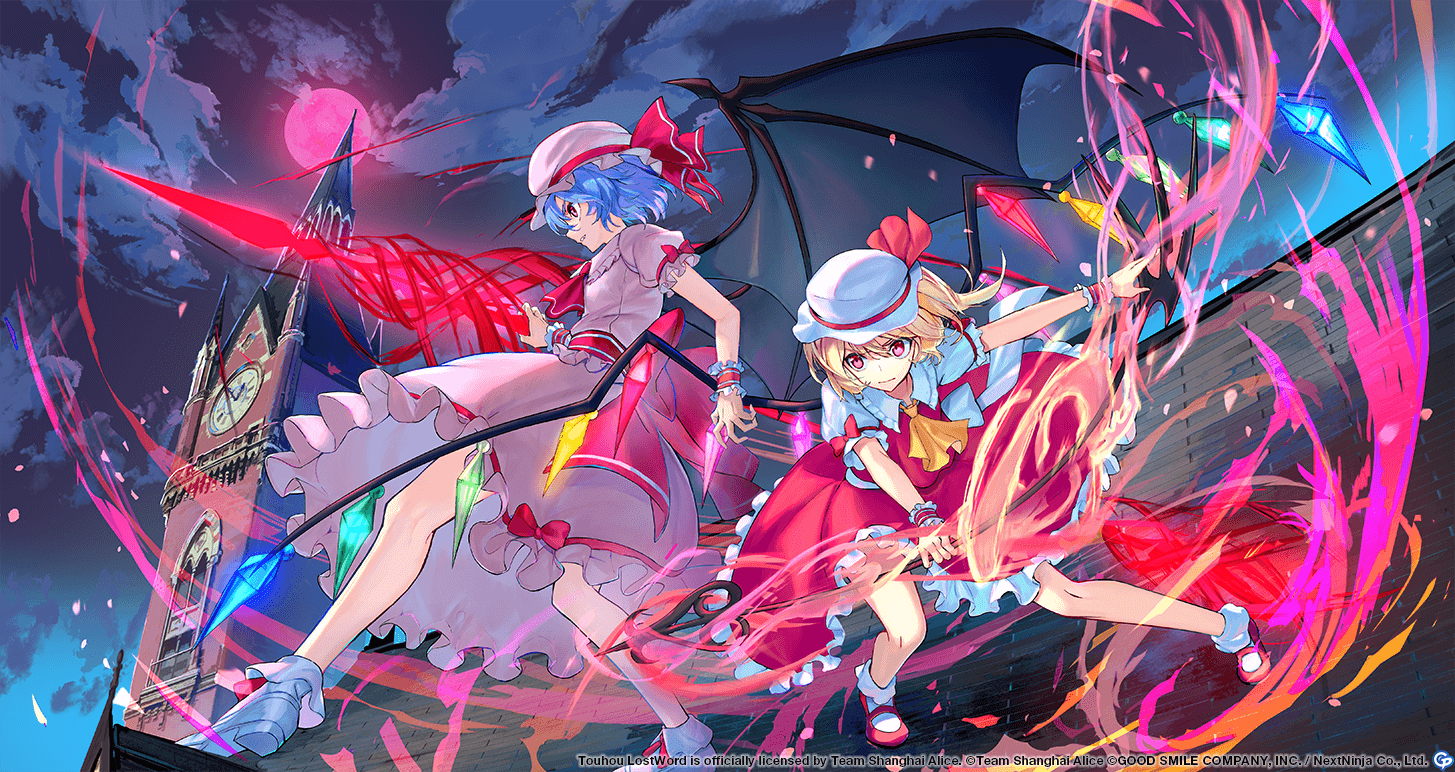 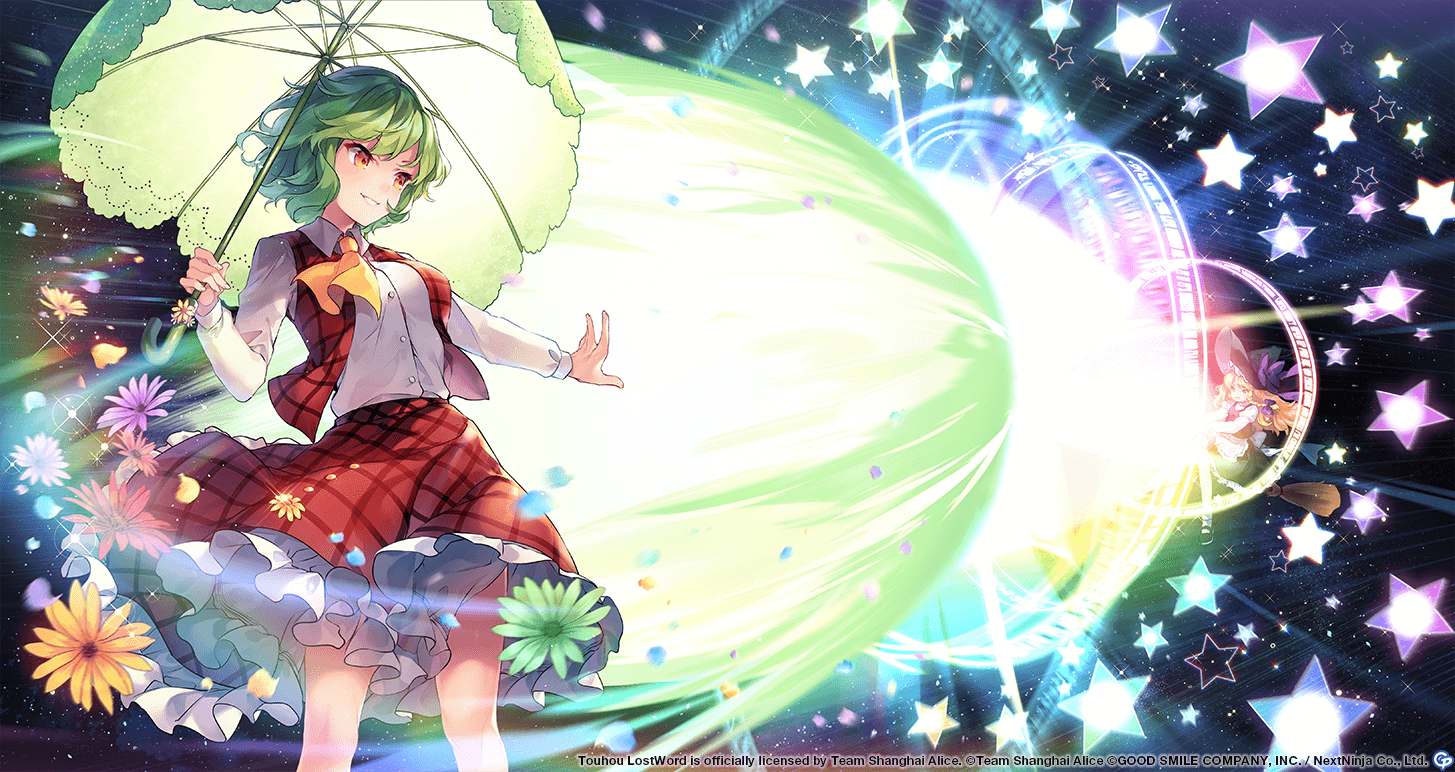 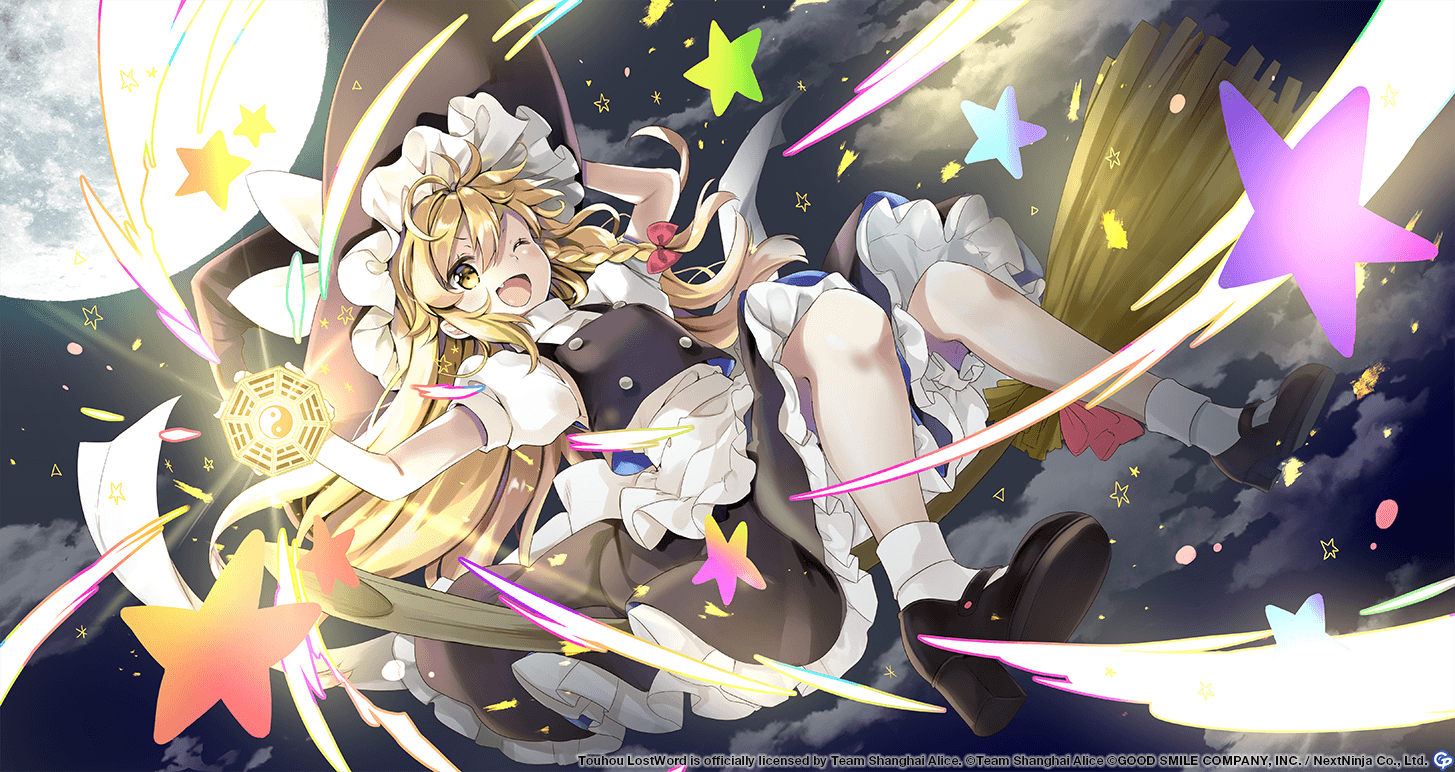 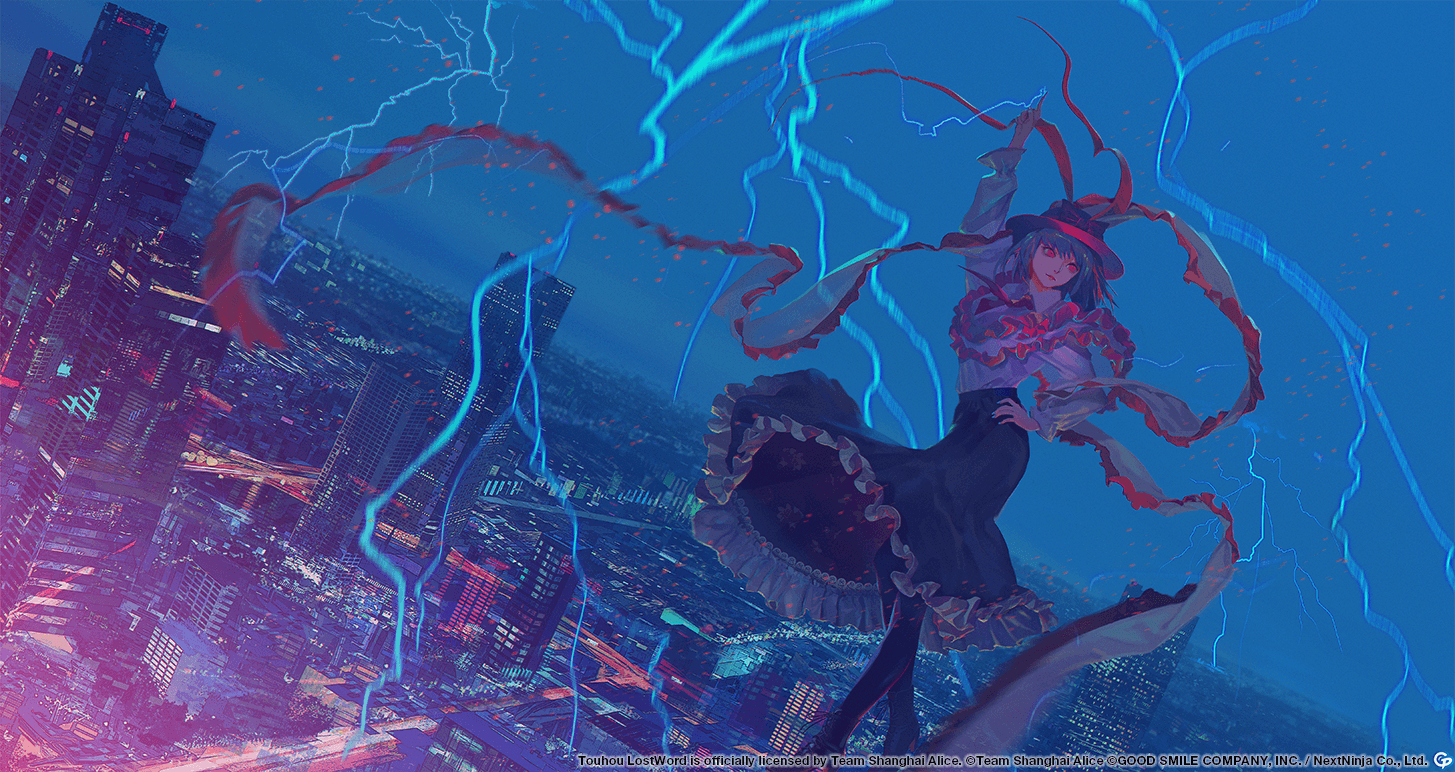 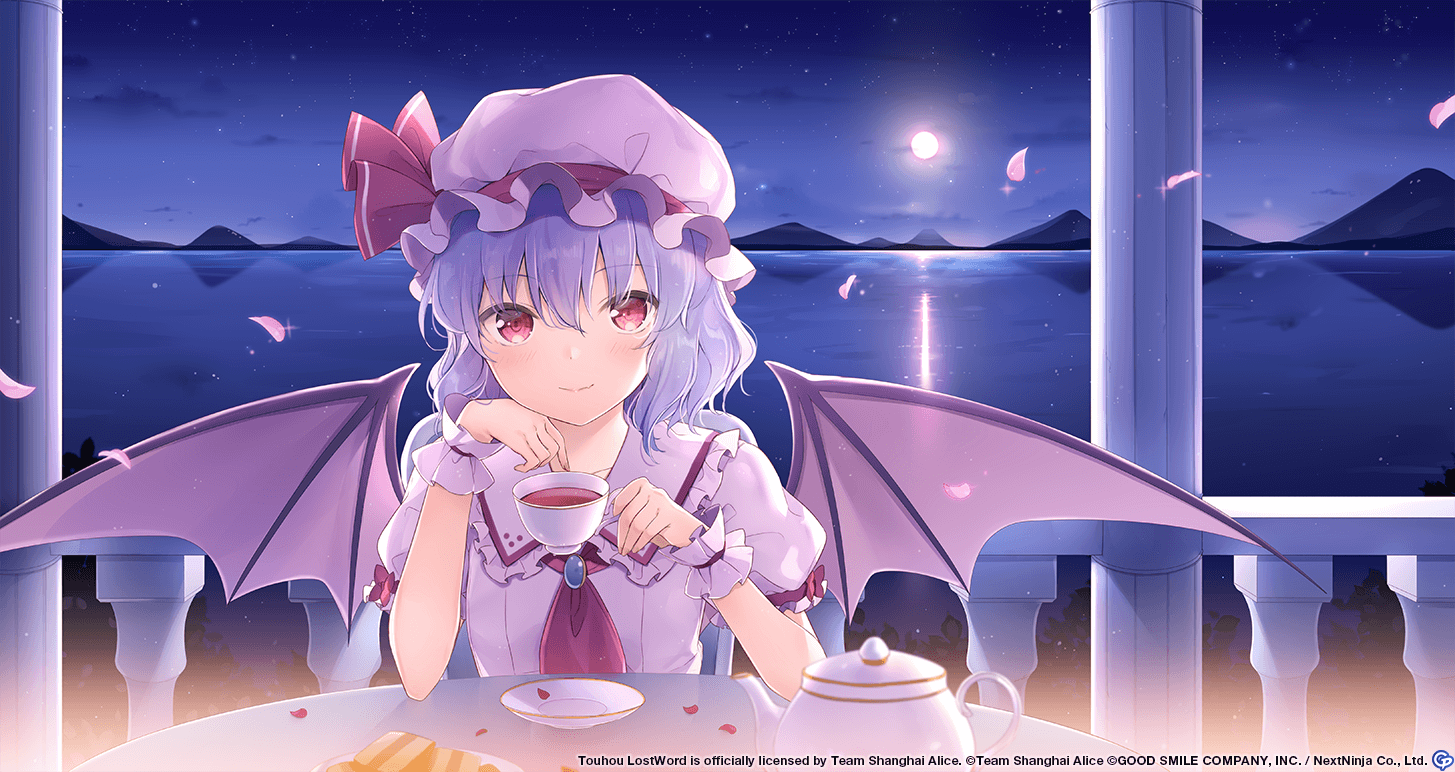 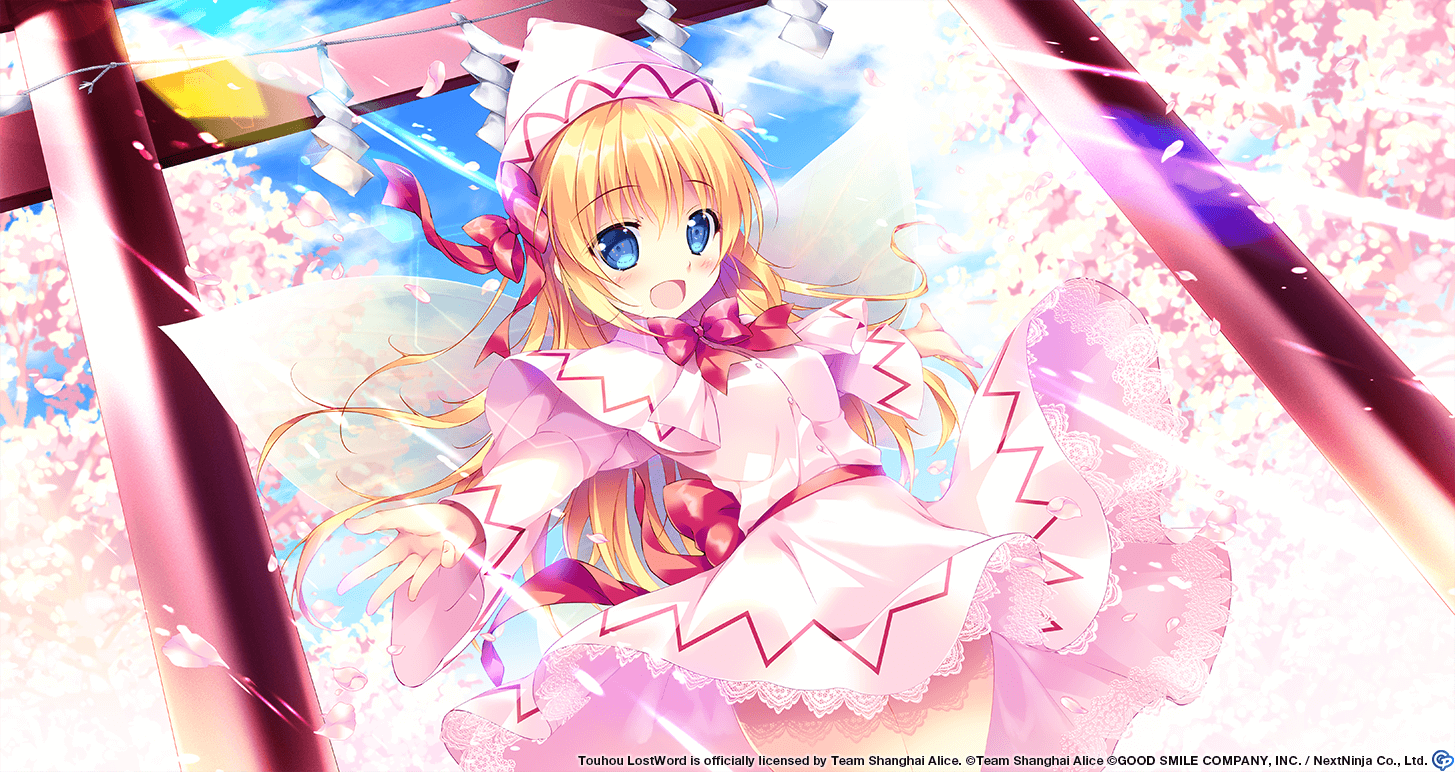 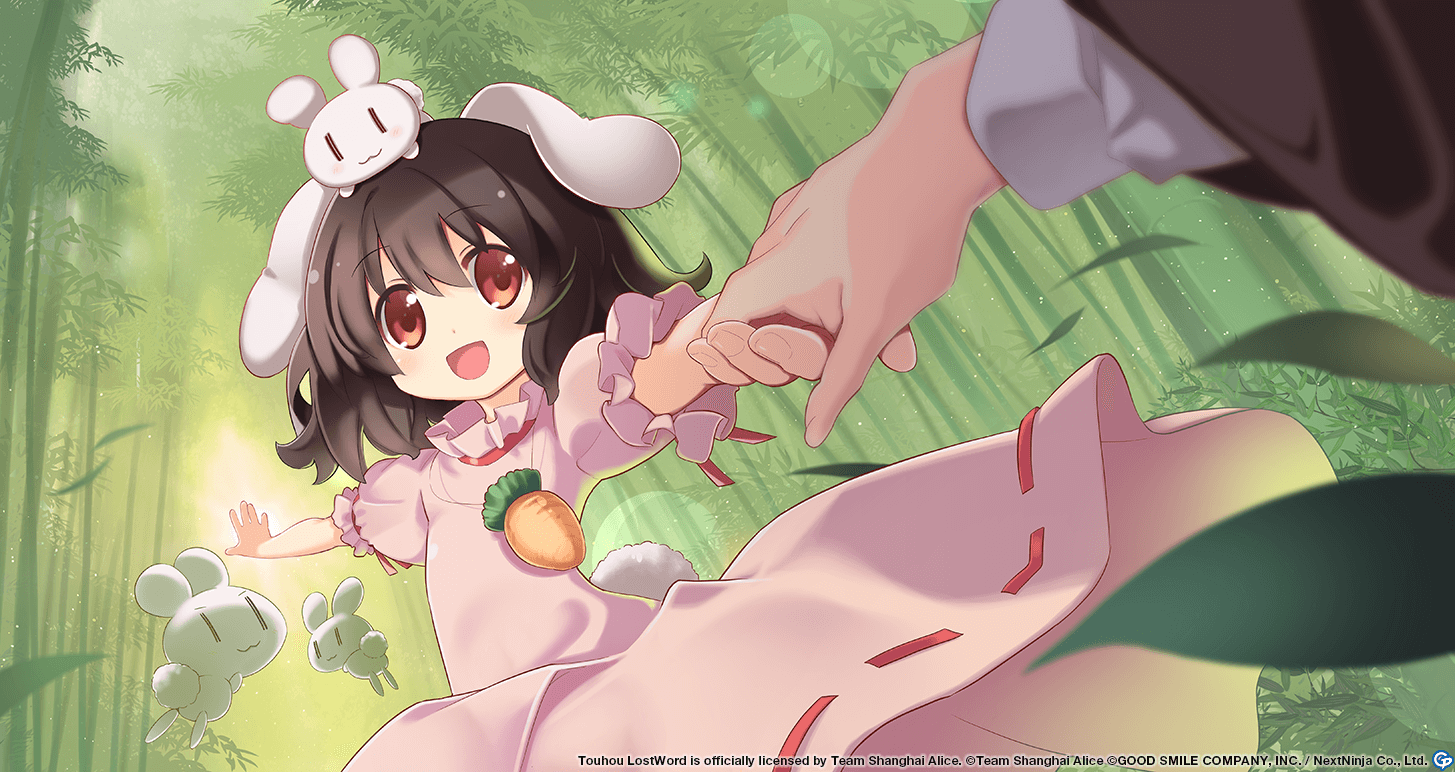 Most of you are likely familiar with what story cards are used for: equip onto spells for some extra effects. Additionally, they can be limit broken with duplicates to further increase their boosts just like Friends, as well as upgraded with tiles and medicine to increase the stats they provide.

As you might know, each Gamepress character analysis contains a section on what story card benefits a Friend’s spells or Last Word the most. However, especially for spell cards, it’s important to recognize the enemy you are fighting against and what story card can provide the best effect at the moment. Sure, Spirit Power restoration might be the most universally recommended (thanks to the farmable story card, Witch of Scarlet Dreams…), but that does not mean you can’t be creative with adding Yin or Yang ATK buffs to spell cards, or perhaps even an elemental buff to give it some extra damage against an opponent weak to that element! It’s important to both experiment and recognize the best situation to focus on a specific spell card. Below is just a small example of where a spell card can be best used, focusing on the featured cards for this prayer. 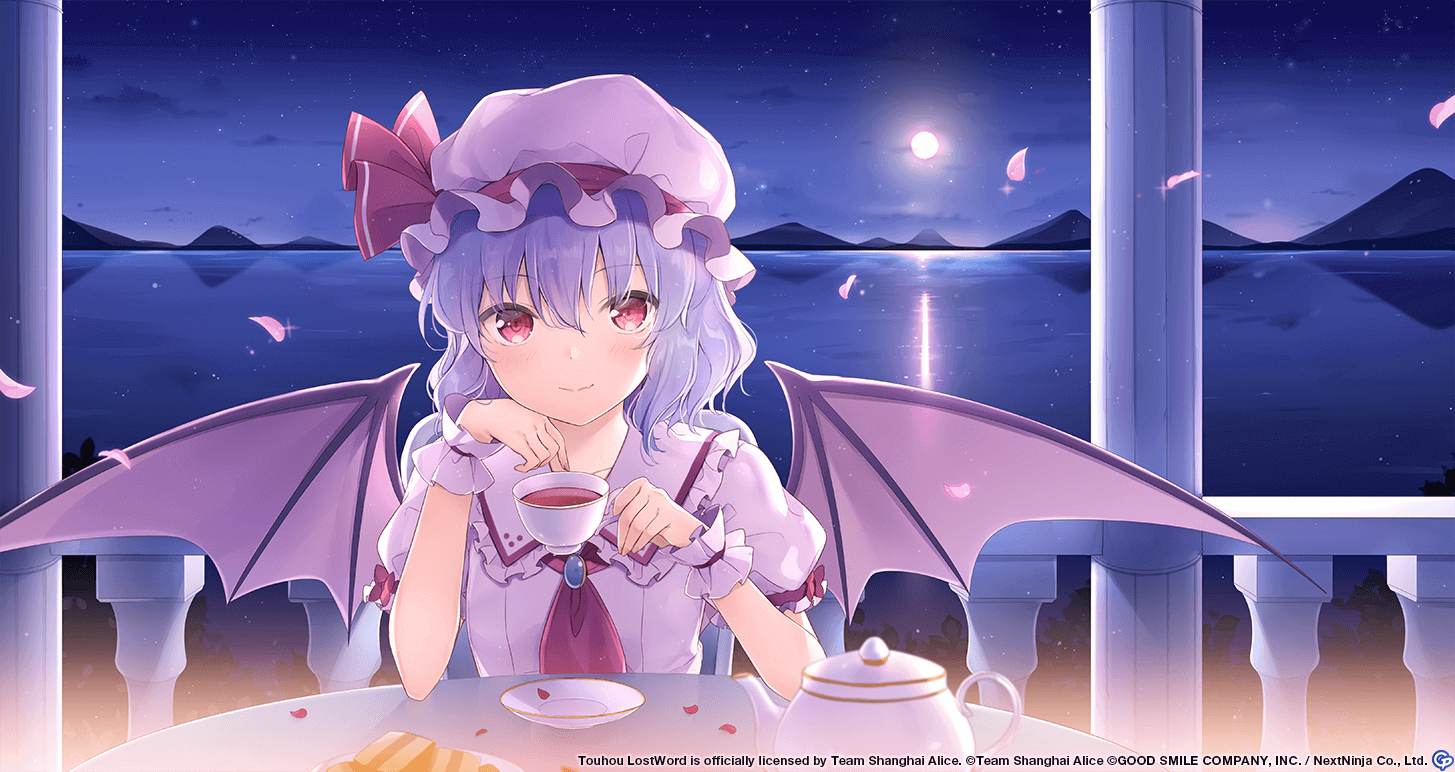 Of course, the easiest use of a story card slot is to get some extra Spirit Power. Spirit Power is needed to access additional bullet lines on a Friend’s attacks, which can bring out additional elemental breaks, potential buffs, or even anomaly breaks. Upon using these story cards, you immediately get the Spirit Power after using the spell, making them very valuable cards. If a Friend cannot get Spirit Power from their own skills or spell effects, these cards are the next optimal option.

Youkai Mountain Anniversary, Midnight Tea, and It’s Spring! are going to be your Spirit Power boosters this prayer. Midnight Tea and It’s Spring! actually have a mirror-like effect going for them when taking a look at their stat sticks, also known as the stats the card gives for just being equipped. Tea is all about Yin stats, while Spring goes only for Yang. Since both boost Spirit Power the same amount, it’s all about what the Friend prioritizes stat-wise. Youkai Mountain, however, just gives a great boost of Spirit Power with a nice Body Bullet power buff as well. Given that this is the new, featured, limited card, this is one you should definitely try to pick up. 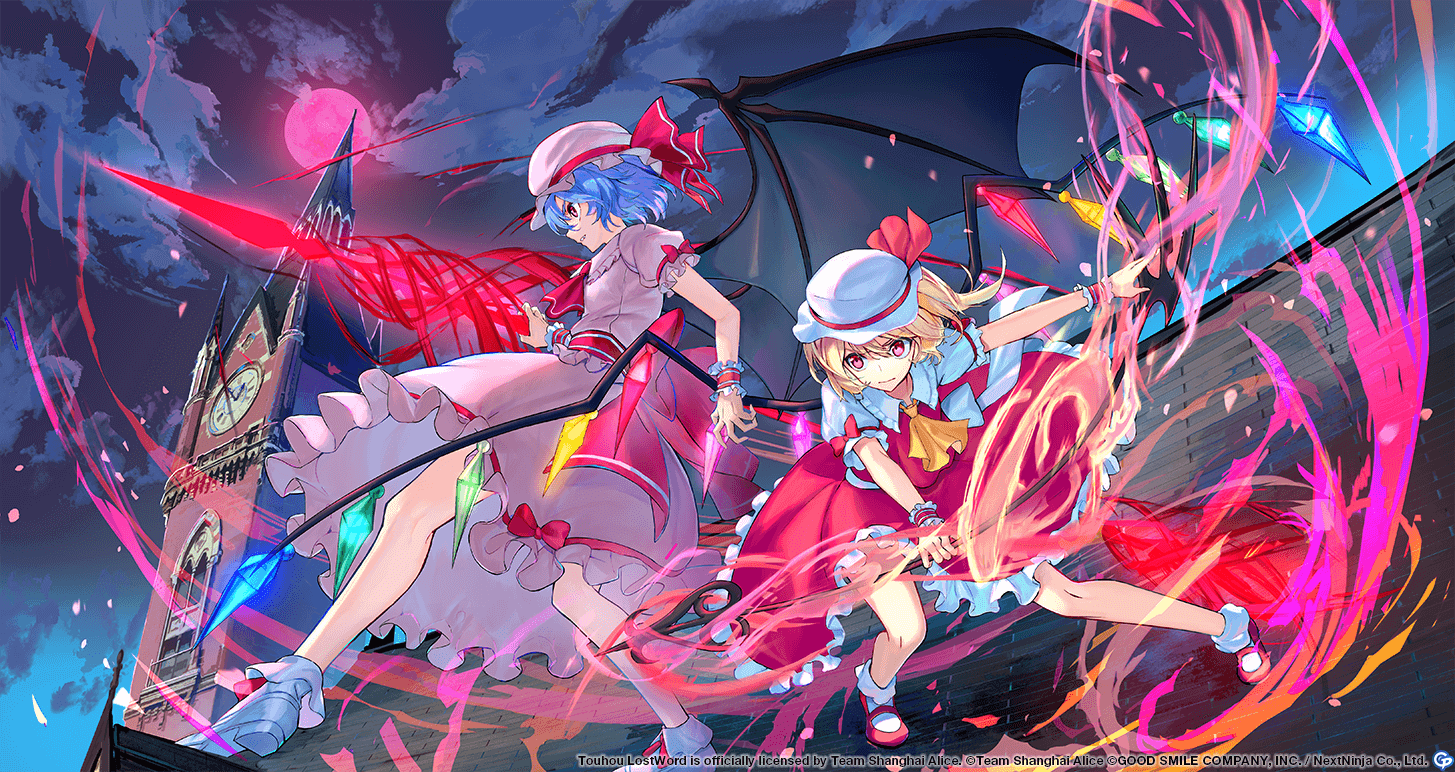 This is pretty self-explanatory: upon using the spell card the story card is equipped to, that spell alone receives a damage buff on the bullet lines that include the featured element. It’s a very nice way to squeeze extra damage out on a foe weak to the featured element. Usually this can be taken advantage of on Last Words, especially when they are fully composed of certain elements, but nothing is stopping you from placing this on a spell card!

Bonds of Blood does this very well for the Fire element, while Protection of Cerpinus does the same for Wood. There are many other cards that buff the same element, such as the other featured Overwhelming Firepower, but these are the best of the business that prioritize the elemental buff.

Another similar effect that won’t be mentioned today is Bullet Type Damage UP, which is exactly the same as it sounds. You can check a Friend’s attacks in-game to see which bullet type a spell is composed of to make the best use of these effects! 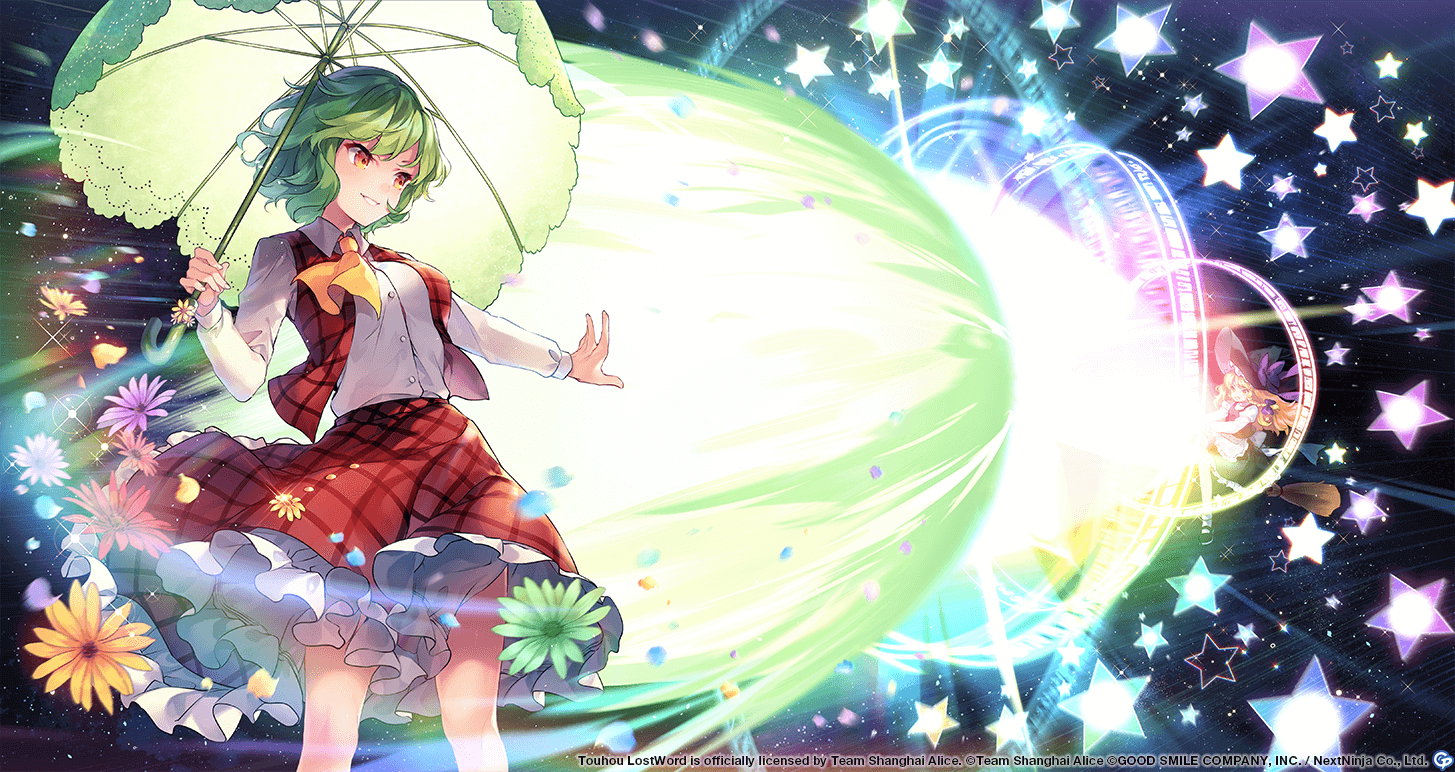 Another self-explanatory effect, but still an important one to point out. Unlike those which just give flat damage increases to elements or bullet types, stat buffs will remain on the Friend until they run out, defined by the 2 or 3-turn runtime stated by the story card. There are a few 1-turn effects as well, which do make those stat buffs less valuable compared to the better ones. This is a very crucial detail, as when placed on a normal spell, the buffs gained from the spell card can be transitioned onto the Last Word for more damage!

Overwhelming Firepower and Ordinary Magician have that opposite-effect feeling to them once again, with the former heavily buffing Yin ATK and the latter doing the same for Yang ATK. Both are very good cards to put onto a spell to transition into a Last Word that is fully Yin or Yang, the type being based on the Friend in question. Always make sure to check out your Friend’s kit and bullets before applying story cards!

You can also group in effects that decrease damage from elemental attacks or certain characters here since they can last multiple turns, but…those effects are rather pointless when you can simply Graze attacks to avoid damage instead, or just use more consistent methods than relying on the element or type of enemy you are facing. 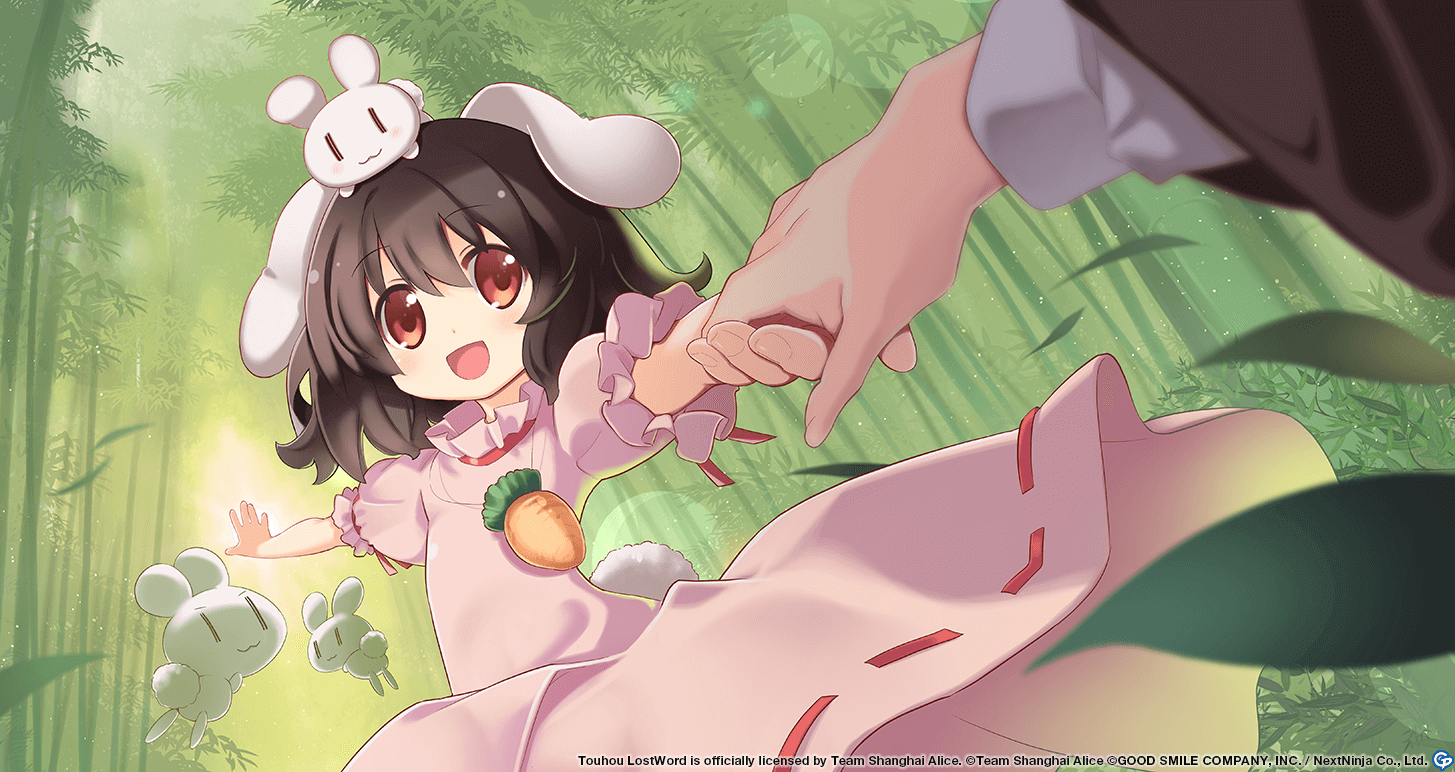 This story card isn’t lumped with the others due to how…unique it is. It’s not a bad story card by any means; an increase in Spirit Power collection means attacks such as All-target spell cards obtain even more Spirit Power upon use than usual. It’s just that, unlike Spirit Power restoration, it can be a lot less consistent than simple Spirit Power boosts, as you are also relying on the Accuracy of the attack at times.

However, one very good effect this story card has, that is very limited as well, is Barrier restoration. While it is only one layer of Barrier restored, this is always a good effect to have in case of emergency, either when needing to Graze one more attack, help your tank avoid fatal damage, or even Graze again to take advantage of Friend-specific buffs that come from Grazing. While this card’s utility is not as clear-cut as the rest of the featured cards here, this should be a lesson that many story cards can have their time to shine based on the scenario.