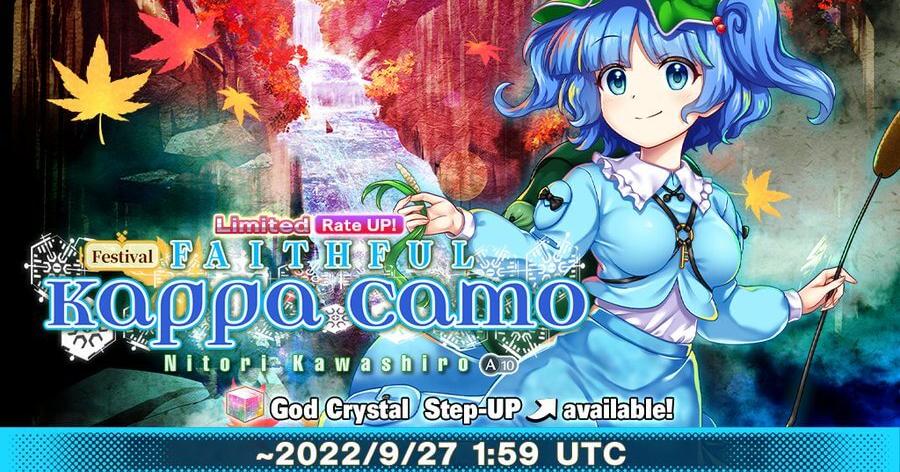 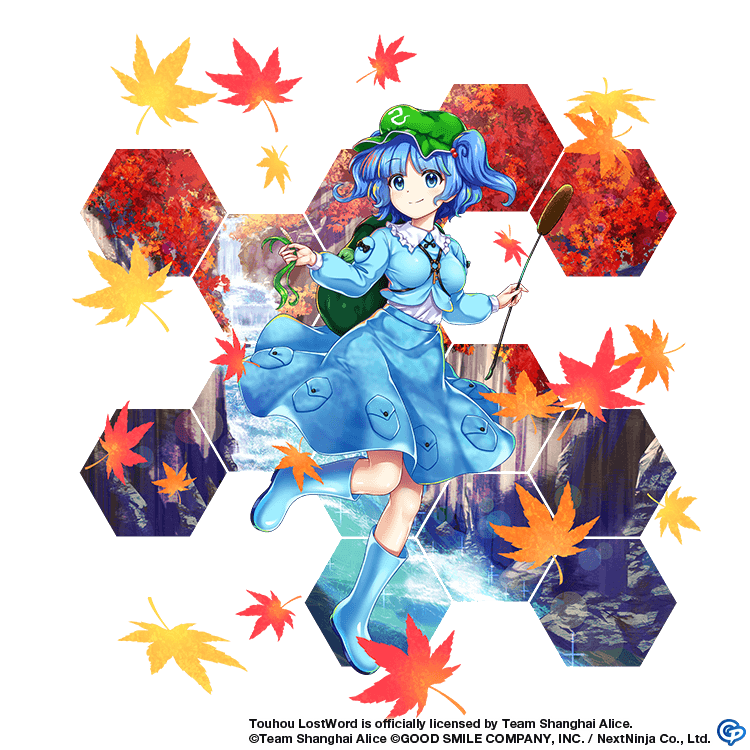 Maybe. The industrious kappa returns in her classic A-Universe form with a renewed kit that sets her above her L1 variant. This selfish damage dealer will get the job done as well as you can expect her to. Just don’t expect her to do much else.

Nitori Kawashiro (Faith) is a self-sufficient Friend with decent Turn 1 damage, Freeze anomaly setting and breaking and minor tanking ability. Element breaks are focused on Moon and Water, with some Fire thrown into her Last Word for additional sizzle. With a P0-Water Spread Shot, she can also hold out if needed to on longer Water based fights, as well as break Burn barriers if required. This kappa can take Burn and Freeze anomalies in stride, being immune from negative effects while also healing 5% of her health for every stack she’s got. Unfortunately, this is restricted to anomalies applied either by her teammates or the enemy, as she has no way to apply these onto herself.

Her competition include the newly released Raiko, Sumireko and Seija who returns once more to sow discord among her enemies. Raiko and Sumireko are available in the Standard Pool of Friends, so players will have a chance of picking them up later on outside their respective banners. Seija is a Fes Friend who, just like Nitori, has a selfish penchant of supporting her own needs as an attacker (while also possibly Blinding her team).

Nitori Kawashiro (Faith) cuts an impressive shape as the face of the Kappa youkai who dwell within the waters that flow from Youkai Mountain. As the face of Gensokyo’s commerce, Nitori is what the Hakurei Shrine Maiden wishes she could be; capable of turning a good profit. The Kappa has since made herself at home within the L1 Universe, going beyond her usual role of inventor and merchant to commentate on a variety of events, both serious and whimsical, while occasionally participating in them herself. In battle, her A-Universe form is an upgrade several steps up from her base iteration, but is ultimately content to remain just shy of what her fellow A-Universe peers can achieve.

Farming-wise, Nitori is capable of hitting the levels of Accuracy every Friend needs to comfortably hit their targets. With her first skill, Retired Doll. Coupled with her third skill, Gohou Douji Kin, Nitori can hit that much desired 2P line on Turn 1, unlocking more burst damage from the get go. Her Last Word, Wind and Clouds! The Youkai Mountain 3D also provides her with 5 Levels of Yin ATK up, enough to decimate the unprepared with a surprise barrage.

Nitori also has some tanking built into her kit. Her first spellcard, Optics: Hydro Camouflage improves her survivability by boosting her Yin DEF and EVASION up to 3 levels up. Should she happen to get hit, her Ability, Capable of manipulating water also reduces damage from Elements she’s vulnerable to by 25% (offset by taking 25% more damage from Elements she is resistant to). Her ability also allows her to sit on Freeze and Burn anomalies without suffering from the usual debuffs. In fact, Freeze and Burn anomalies will heal her for 5% for every stack she has!

Speaking of anomalies, Nitori is able to apply up to 3 barries of Freeze to one enemy with her second skill, Wild Shikigami, as well as her Spread and Focus shots on 3P (35% chance). Her second spellcard, Kappa: Spin the Cephalic Plate can then be used to break these at 2P, leaving her target worse for wear, especially when combo-ed with other Freeze applying Friends. Her Last Word also has Burn breaks built into it at 2P, although she will need a Friend (or enemy) capable of applying Burn to begin with.

When it comes to Element breaks, Nitori leans heavily towards Moon and Water, with 2 Moon and 2 Water on her first spellcard (Single Target) and 3 Moon and 3 Water on her second spellcard (AoE). Her LastWord adds Fire into the mix, giving her 2 Water, 2 Moon and 2 Fire in ascending bullet order. She also gets a 0P Water on her Spread Shot, allowing her to chip away at Water weak enemies with ease.

Special mention to Nitori’s range of Killers, which seem uniquely targeted towards murdering the heck out of the Moriya faction. Taking all her bullets into consideration, these include natural Crits on Humans, Gods, Shrine Maidens, Magicians, Incident Resolvers and anyone related to the Moriya Shrine. Is this kappa planning a revolution against those who live higher up on the mountain?