Should You Pull? Festival: Pegasus Dullahan?! 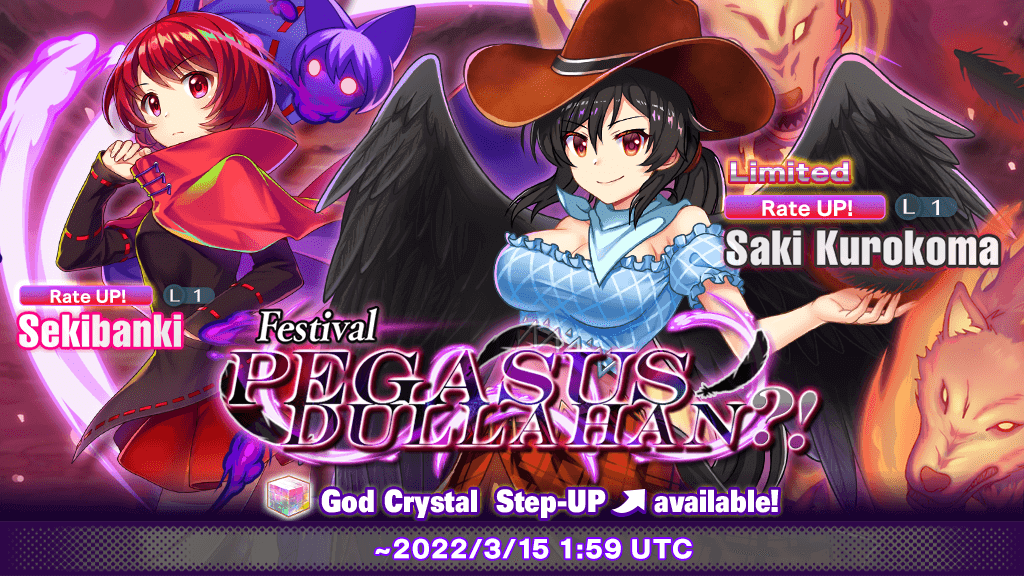 Maybe, slightly leaning toward Yes. Both Friends that can be found on this prayer are higher in viability when compared to the General Prayer they are co-running with. While their team utility can be lacking, Sekibanki and Saki Kurokoma hold a variety of elements, with Saki especially standing out with a Fire-only Last Word, which can definitely be useful in the future Fire EX Battle Stage. Otherwise, Sekibanki can decrease Evasion using her Last Word but has a very low amount of HP that greatly risks her survivability. They can both be helpful in battle, but Saki is definitely the one that stands out here.

This is a Festival Prayer, but that Festival status only applies to Saki. This means that Saki can be exchanged for 150 Exchange Points and will not join the general pool after her release, only returning for reruns. Since Sekibanki is a general friend, she can be exchanged for 100 Exchange Points, the same as the General Friends on the other Prayer. 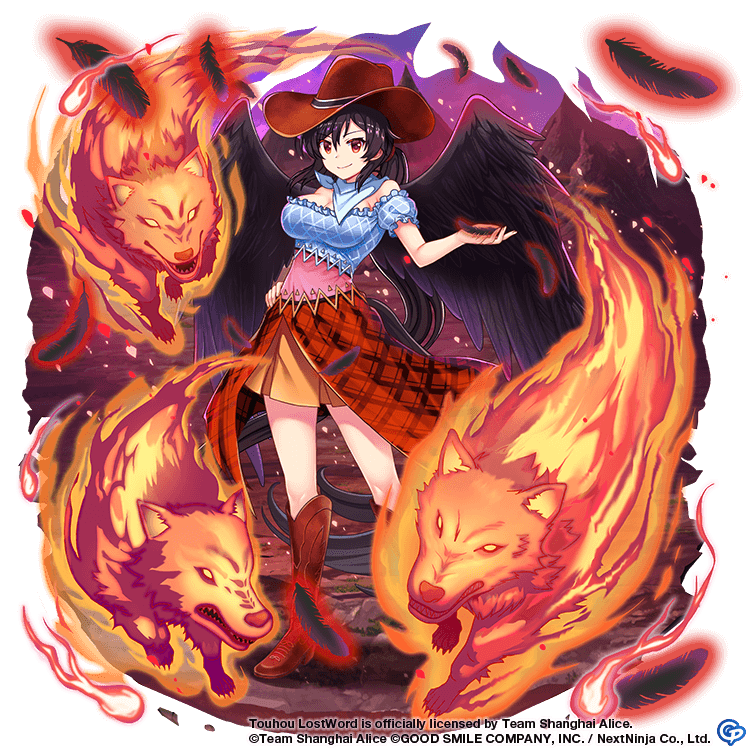 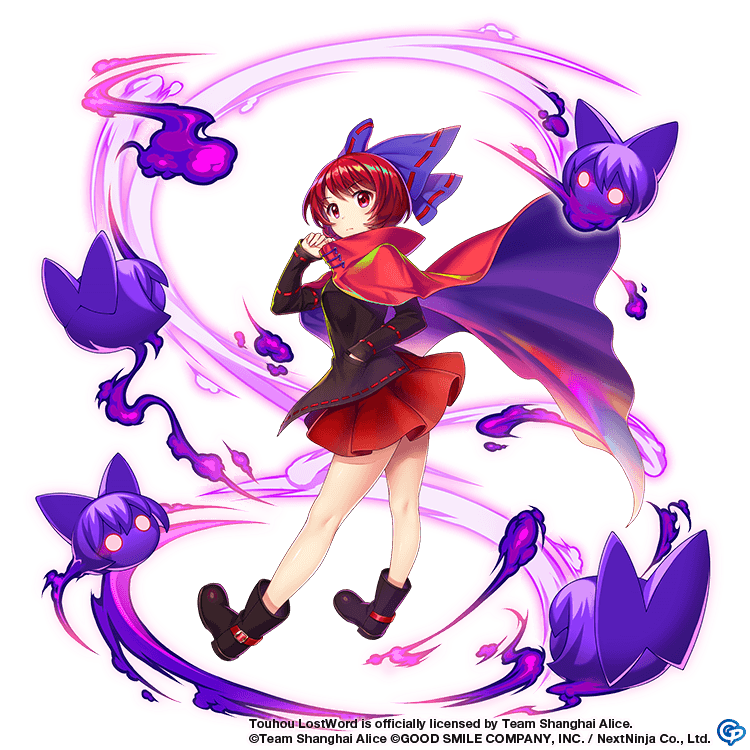 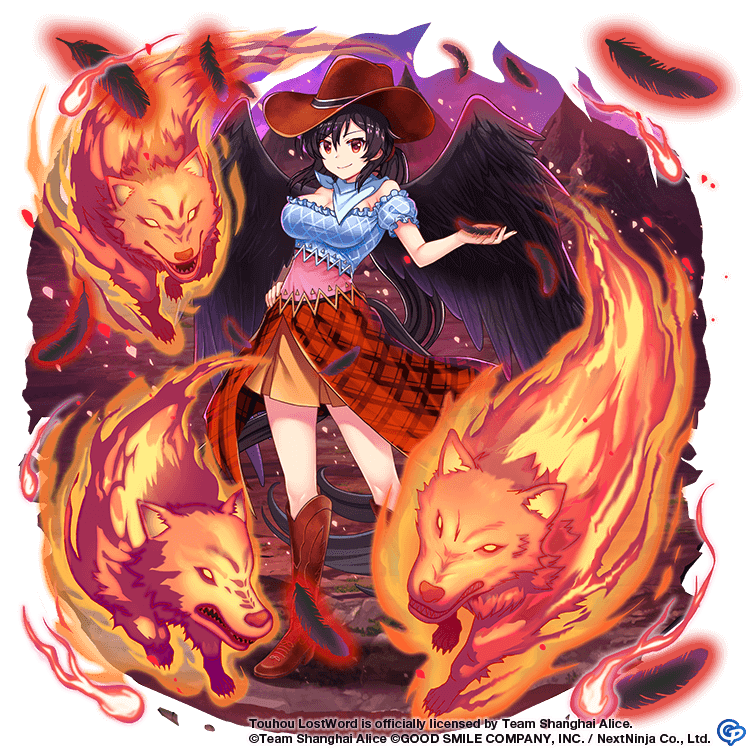 Saki Kurokoma is the matriarch of the Keiga Family, and leader of the wolf spirits in the Animal Realm of Hell. In the events of Touhou 17: Wily Beast and Weakest Creature, she teamed up with Yachie Kicchou, leader of the otter spirits, and Yuuma Toutetsu, leader of the eagle spirits, to overthrow Keiki Haniyasushin, effective leader of the human spirits, to take over Hell in its entirety through using the wolf, eagle and otter spirits together to control Reimu, Marisa and Youmu. Saki's ability, "unmatched leg strength", makes her more physically powerful and faster than most characters, lending to her horse-like features. Saki acts and talks very casually, enjoys battle, and respects those who can go toe-to-toe with her in a fair fight.

Saki is a force to be reckoned with on the battlefield. With her Spell Cards providing a ton of barrier breaks, her Last Word serves as the centerpiece of firepower for her. With all of these factors combined, Saki’s only one flaw would be her mediocre team utility. However, that doesn’t prevent her from being a powerful character to use in content.

Saki’s skills are selfish but effective in helping her fulfill her job. Her third skill, Wolf Spirit Assist, provides her Accuracy and Yin ATK which help make her damage even better as well as make her already accurate barrier breaks even more accurate. With her second skill, Imperial Derby, she gets access to 1.5 P which allows her to shoot out a lot of barrier breaks while increasing her damage with Agility UP due to her slicing scaling. Finally, her first skill, Fine Ancient Steed, provides the team 2 stages of Agility whilst also providing herself 2 stages of Evasion UP. While these skills don’t support the team, her barrier breaks and damage are the main selling point of Saki and these skills don’t fail at making her effective at these roles.

Saki is nearly the complete package when it comes to content. The only thing truly holding her back is her mediocre team utility. However, she compensates this with breaks and damage comparable to even the strongest hitting Solo-targeting Last Word. All these things help her become one powerful friend to call your ally. 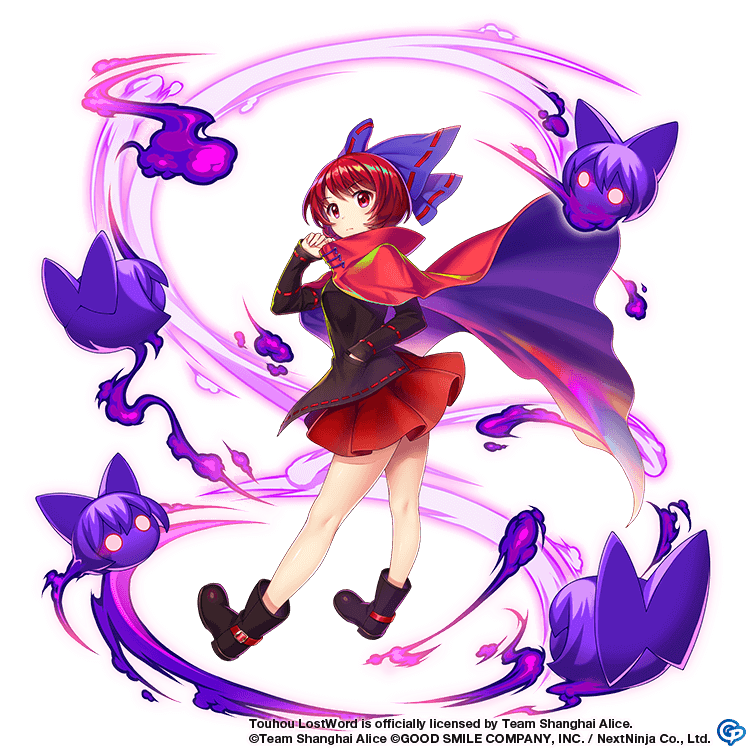 Sekibanki is a Rokurokubi, also known in the west as a Dullahan. As seen by her design, she looks almost identical to a regular human. With the ability to detach and multiply her heads or elongate her neck, however, she is anything but. Even if she is able to shoot bullets from each head and confuse foes, she is still considered a weak youkai. Fortunately for her, other lesser youkai, including Wakasagihime and Kagerou Imaizumi, are connected through the “Grassroots Youkai Network.” They often share information with one another, but the three of them made the perfect targets during the Social Upheaval Incident, in which all of them were frenzied and lashed out against all who approached with desires to overthrow the higher class. That was in the past, though, and now she can listen to others once more.

Sekibanki is a generic All-target nuker that has good access to her primary element, Fire. 3 Fire breaks on her first spell, Flight Sign: Flying Head, 2 breaks on Flying Head: Dullahan Knight, and even a 0P break on her Focus shot, Remote Tackle, solidifies her place as a solid Fire breaker. Her Last Word, Sky-Spitting Fiery Gaze, is a mix of 2 Moon, Fire, and Star breaks, making it somewhat awkward to normally support with most Story Cards but is still a very strong attack thanks to both Hard and Slicing scaling. Flight Sign: Flying Head provides 2 levels of Agility UP to the whole party (3 turns) and Flying Head: Dullahan Knight gives herself 3 levels of Yang DEF UP (2 turns) to support these scalings. Her first skill, Hiding in the Village, joins in with 2 levels of Yang DEF and Agility UP (3 turns).

Her other skills play toward strengthening her own potential as well. Her second skill, Extendable Neck, doubles as a boost of 1.0 Spirit Power as well as accuracy support from 2 levels of Accuracy UP (3 turns). Her third skill, Extra Heads, is primarily useful for its 2 levels of Yang ATK UP (2 turns), which the pre-attack effect of her Last Word joining in for 2 more Yang ATK UP levels (3 turns). Combined with her character ability to make her head fly, making each Boost increase her Yang ATK by a single level that turn, she can reach 7 levels of Yang ATK UP when using her Last Word with an optimized set-up, solidifying her role as a Yang nuke.

Unfortunately, this is about everything Sekibanki excels in. As seen from her skills, every buff except the agility from Flight Sign: Flying Head is purely for her own benefit, making her a very selfish attacker that doesn’t contribute much outside of hitting hard and some Fire breaks. Additionally, her HP is rather low in comparison to many other Friends, meaning you will have to make sure she doesn’t get knocked out before unleashing her strong strikes. It seems like that is truly where Sekibanki’s status as a weaker youkai revealed itself, but considering all of the power she demonstrated beforehand, she is still a rather solid choice if strength is what you need.