Should You Pull? Rerun Festival: Dance of the Butterfly 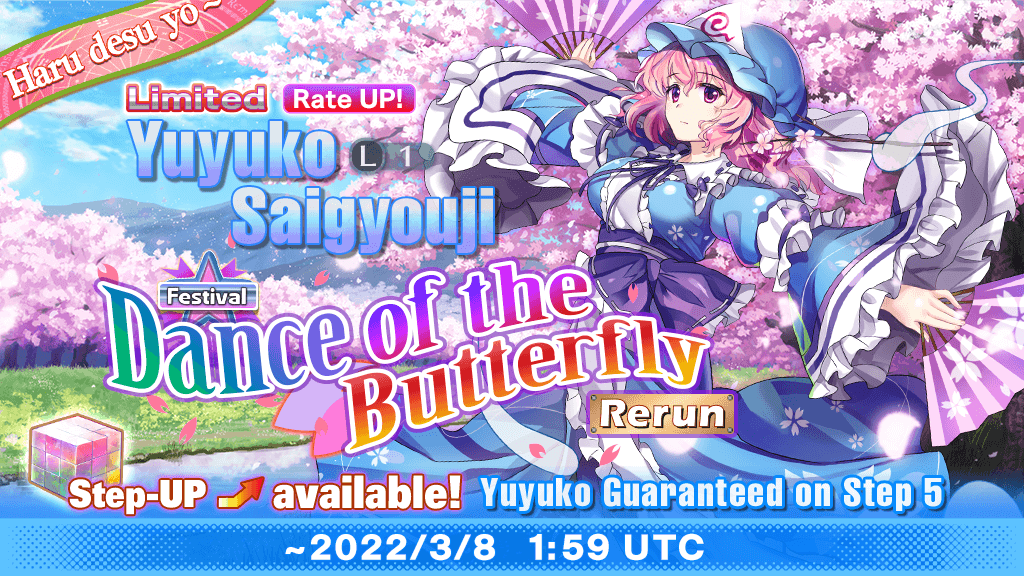 A rerun of the first Festival Friend in Touhou LostWord Global, Yuyuko Saigyouji is still a very capable unit even after almost a year of new characters. She might not be as above the competition as she was in earlier days, but her strengths are still very apparent as she works toward nuking all opponents with heavy Yang ATK buffs and some Accuracy UP on her Last Word. She can even set herself up as a finishing option thanks to using Charge on a skill, making her a very easy offensive option for newcomers.

Circumstances are a bit different this time, as the God Crystal Step-UP for Yuyuko has a special bonus, guaranteeing Yuyuko on the 5th step! For 1200 God Crystals total (600 Step 1, 400 Step 3, and 200 Step 5), you are guaranteed one copy of the ghost girl. This is a great way to easily ensure a Yang nuke for any flexible team composition.

- Both Spell Cards are Solo
- Only 1 Wood Break at P0 for both Spell Cards, with only a second one at 2 and 3 P respectively.
- No team support
- Gets no benefit from Atk Up or Accuracy Up - must be supported with Def Down 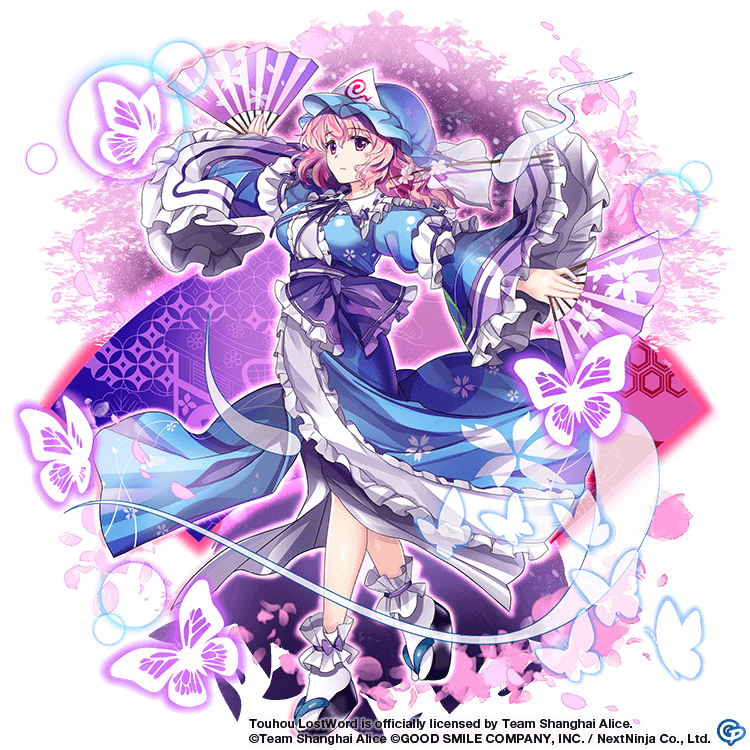 Yuyuko Saigyouji is the ghostly princess of the Netherworld, residing within Hakugyokurou, a Japanese mansion. In life, over a thousand years ago, Yuyuko was the mistress of the Saigyouji clan. A human girl with a terrifying ability, at first all Yuyuko could do was manipulate departed souls. As time went on, it grew more and more powerful, before she finally gained the ability to invite anyone to their own death. Terrified of her ability, Yuyuko committed suicide, and her corpse was used to seal away a monstrous youkai tree that also invited others to their death - the Saigyou Ayakashi.

After she passed on, she was granted her current position in the Netherworld, due to the judges of the afterlife being impressed by her ability and unwillingness to hold grudges. This carefree attitude is reflected in the playful, cheery Yuyuko of today - with no memory of her past life, she carries on her death with the same gusto and enthusiasm as a hedonist might have for life. Gluttonous, and with a head seemingly full of only air, one could be forgiven for mistaking her to be a fool. But underneath it all lies a cunning and sharp mind,  and a terrifyingly powerful ghost princess who still possesses the same ability she had in life.

All this talk of power isn’t just for show. Yuyuko might not be able to instantly kill anyone in LostWord, but her All Last Word, Saigyouji Parinirvana, deals so much damage you’d be forgiven for assuming it simply inflicted instant death. That’s only at 1 Power as well - at 3, which her second skill Soul Torch helps her reach by providing her with 0.75 Power, this already strong Last Word nearly doubles in power, making her highly potent in longer fights. It wasn’t always meant to be this strong, but in the original Japanese release of the game, her Last Word was bugged to do too much damage. They compensated her by giving it five levels of Yang ATK UP, which combined with her first skill Spirit Service and her ability Capable of Manipulating Death allows her to reach a jaw dropping 9 Yang ATK UP on the very first turn. And if that wasn’t enough, her third skill Under the Flowers gives her a remarkable 3 Accuracy UP for 3 turns and 1 turn of Charge, making her both self-sufficient and able to work with just about any debuffer.

Yuyuko definitely isn’t perfect. Her 9 Yang ATK UP and 3 Accuracy UP, while extremely potent, means that it can be difficult to find a Story Card which meaningfully upgrades her damage, and that the only team support she benefits from is Def DOWN. Additionally, her access to Elements is merely average, having only access to 1 Solo Wood Break on both of her spell cards without spending either 2 or 3 Power for the additional Break. Whilst her Last Word also has Wood, it deals so much damage for any type of fight that it’s almost never worth using to Break.

Over the past months, many other Friends have shown off overwhelming power to place themselves over the Netherworld ghost, and even she has dropped down a tier from the growing expectations. However, don't let this distract you from the benefits she never lost and take advantage of this powerful Friend while you're able to get her. Even if she is unable to support the team with buffs, her damage output is always a welcome sight.