Should You Pull? Rerun Festival: Half-Perfect Gardener of Spring 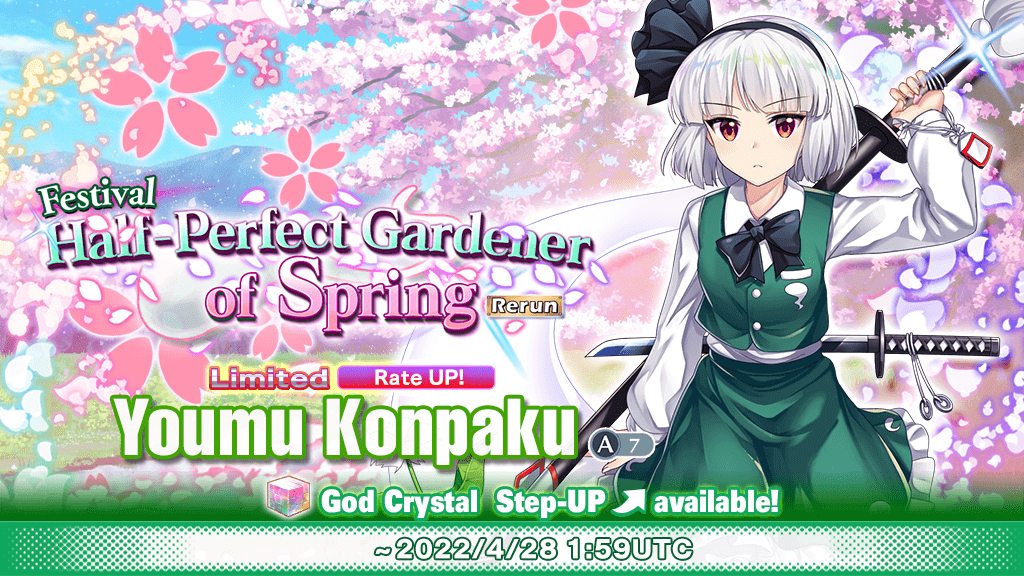 Maybe, leaning toward a No. Youmu Konpaku from the A-Type multiverse is the definition of a solid attacker that goes straight for critical hits with her Killer bullets, but the competition she is co-running with is just as tight. All of the Ultra Festivals she is running with- B3 Sagume Kishin, Z1 Marisa Kirisame, and R2 Yuyuko Saigyouji- are practically meta picks, and while Youmu has some practical use for Water EX (especially with her second spell), Yuyuko reinforces herself as the gardener’s superior in that aspect as well. Not to mention the Water EX Festival that is co-running with this prayer as well, which provides other practical picks for the Water EX Battle Stage, with 4/5 of the competition only needing 100 Exchange Points to exchange due to being General Friends. Without a solid 5* story card featured like A8 Reisen Udongein Inaba and Overwhelming Firepower, it is somewhat difficult to recommend this prayer at the moment. Still, A7 Youmu is a very hard hitter that has that Water EX utility and is the ever-popular Myon.

Unlike the previous A-Type reruns, Youmu (Perfect Cherry) will only be around until April 28th, making the choice to grab her even more troubling. Just as her debut prayer, Youmu will cost 150 Exchange Points to exchange for a single copy. At the very least, she will feature an Ascending God Crystal Step-UP, meaning that 60 God Crystals can be spent for one 10-pull and for the next 4 steps they will cost 100 more GC than the last (60, 160, 260, 360, 460). 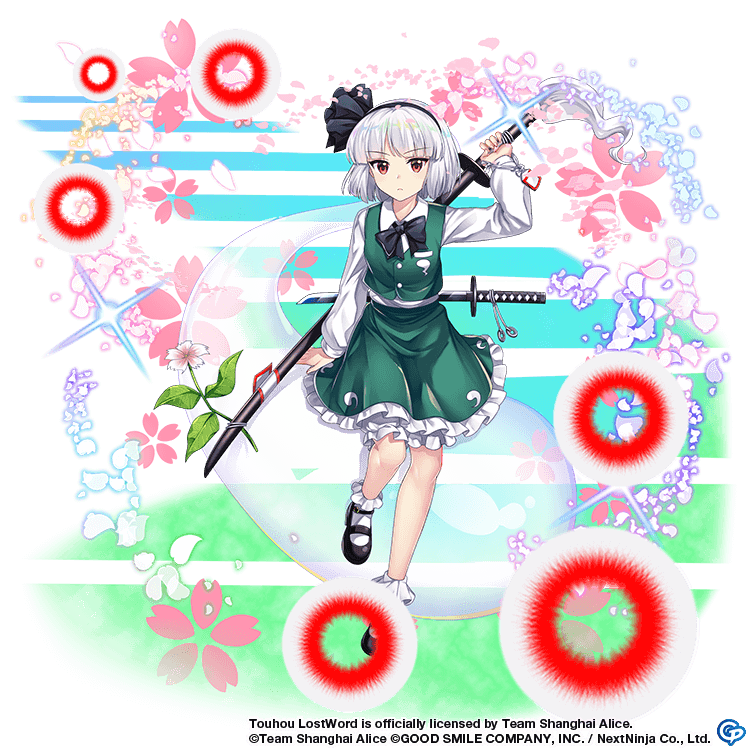 + Fantastic support for CRIT and Killer attackers
+ High All-targeting damage on Last Word
+ Good access to Water and Metal Breaks, including P0 All targeting Metal on a Basic Shot
+ Can farm the Witch of Scarlet Dreams Story Card (2-7-1) by herself
- Somewhat back-loaded damage
- CRIT is inconsistent 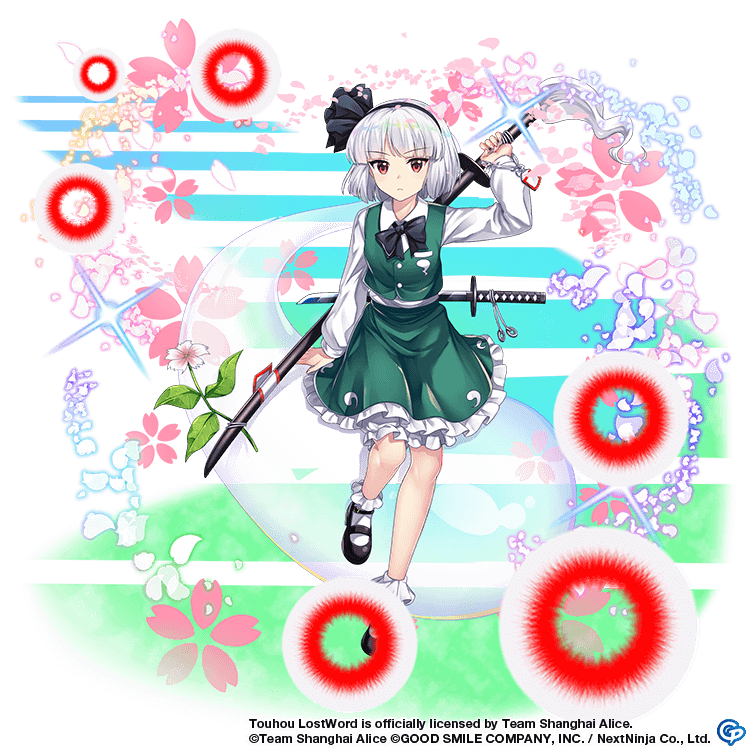 In another world, another time, the Perfect Cherry Blossom incident never ended. The heroines were never able to stop Youmu Konpaku from gathering spring - and yet at the same time, the Saigyou Ayakashi never bloomed. As such, the world this Youmu Konpaku hails from is stuck in an eternal stalemate - a never-ending winter, one which has yet to be resolved as neither side can obtain their goals.

In LostWord, Youmu Konpaku (Cherry) serves the role as a attacker-suporter hybrid, with a focus on supporting Killer-heavy and CRIT attackers. For starters, her skills help her accomplish this goal well: notably, her first skill, Immature Swords, grants her entire party 2 levels of CRIT ATK & CRIT Accuracy UP (2T). Spring Gathering further assists her CRIT identity, giving her 2 levels of CRIT ATK UP (3t) alongside 1 Spirit Power UP - and an unfortunate self Charge, which results in her needing to delay her Last Word (more on that in a bit). Youki’s Teachings lastly grants her 2 levels of Yang & Yin ATK UP (3T). To finish out her skills, her character ability grants her 20% DMG UP to both resisted and effective elements, alongside 1 level of CRIT ATK UP (1T) each time she grazes.

To compliment her party-wide buffs, her All targeting Last Word, Matsuyoi-Reflecting Satellite Slash - Distant Flowers inflicts 3 levels of CRIT DEF DOWN (3T) - since CRIT DEF DOWN is so rare, this is a highly coveted trait, though slightly let down by her self-charge from her third skill - make sure to use it a turn before your other attackers use their Last Words. It also bolsters her own damage output, as her Last Word has between 10% to 40% base CRIT, alongside the potent and wide-ranged Gensoyo Killer on bullets 5 and 6 - complimenting its 1-2-2 layout. It’s also perfectly accurate with a Mysterious Sword Master Story Card, thanks to the 100% chance for 1 level of Accuracy UP on the third bullet. Unfortunately it does need at least one turn of setup for maximum damage, but between all these desirable traits it’ll certainly hit like a truck even on the first turn - and if you don’t need damage from Youmu, it also packs 3 Wood and 3 Moon All targeting Breaks at 3 Spirit Power. Perhaps the only flaw it has is its mixed damage between Yin and Yang, but Youmu already does so much damage it’s hard to care too much.

The rest of her notable attacks are more oriented towards team support, if somewhat situationally so. For starters, her Focus Shot, No-Life No-Death Slash has 1 All targeting Metal Break at 0 Spirit Power. Next, Heaven God Sword: Three Kons, Seven Hakus inflicts 2 levels of Yang DEF DOWN (2T) against a single target, alongside 4 Metal and 2 Water Solo targeting Breaks for 3 Spirit Power. Lastly, Six Realms Sword: A Single Thought and Infinite Kalpas inflicts 2 levels of Yin DEF DOWN (2T) against a single target, alongside 4 Water and 2 Metal Solo targeting Breaks for 3 Spirit Power. Altogether, this means Youmu excels when you need additional support against single priority targets, though the Solo targeting nature of most of her Breaks and her DEF DOWN leaves these parts of her kit somewhat situational.

As a final note, if you’re interested in Story Card farming, she can farm the Witch of Scarlet Dreams single-handedly. Pretty handy, that.

Overall, Youmu is a highly competent attacker with damage and support in spades, with the downside of CRIT being somewhat inherently inconsistent. Still, even below-average cases leave her a cut above the competition, and you won’t be let down - unless you were hoping for winter to end. She’s kinda still trying to make the Saigyou Ayakshi bloom, you know…

If you would like to learn more about Youmu Konpaku (Perfect Cherry)’s original world, check out the article below!

An Introduction to A7: The World of Perfect Cherry Blossoms