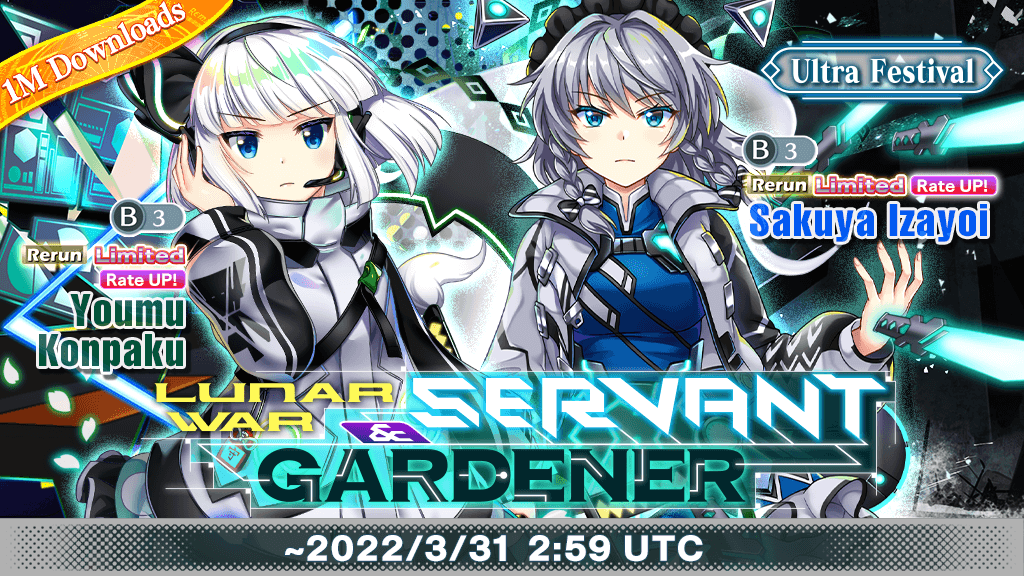 A very hard Maybe veering toward No. Both Youmu Konpaku and Sakuya Izayoi from the B3 Universe are still very strong Friends whose tiering placement have been unchanged since their release. Gardener is very solid in providing Yang buffs and Accuracy as well as hit hard, and while Servant might not have all of that herself, she relies on heavy Slicing scaling and Freeze anomalies to be a very supportive team player. Unfortunately, with the incredible Ultra Festival B3 Watatsuki no Toyohime, useful Festival Friends Reimu Hakurei (Scarlet) and Marisa Kirisame (Scarlet), and Fire Elemental Festival Part 2 for Fire EX co-running with this Prayer, it is hard to recommend either of these Friends in the short-term unless you love mecha-girls or these characters.

This Prayer ends at the same time as B3 Toyohime’s prayer: March 31st. This is a few days before Scarlet Reimu and Marisa’s prayer ends, which would be on April 3rd. Consider the shorter time to pull before spending on these prayers.

As these are both Ultra Festival Friends, these Friends will only be available on this Prayer or future reruns. Additionally, you can exchange 250 Exchange Points for a copy of either Friend and they require Divine Paper Dolls or duplicates to limit break. Unlike the 2 non-Ultra Festival Prayers it is running with, there is no special Step-UP opportunity with this prayer. 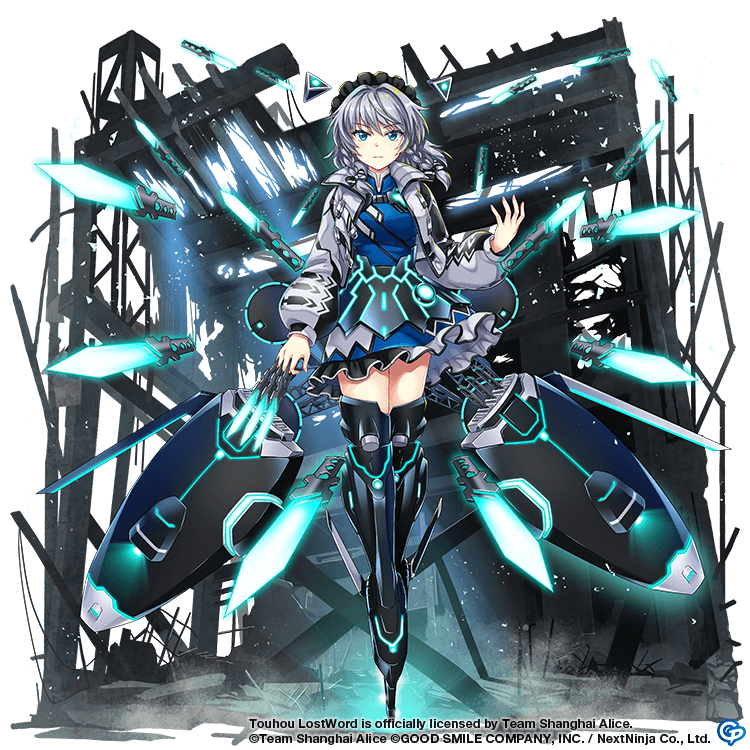 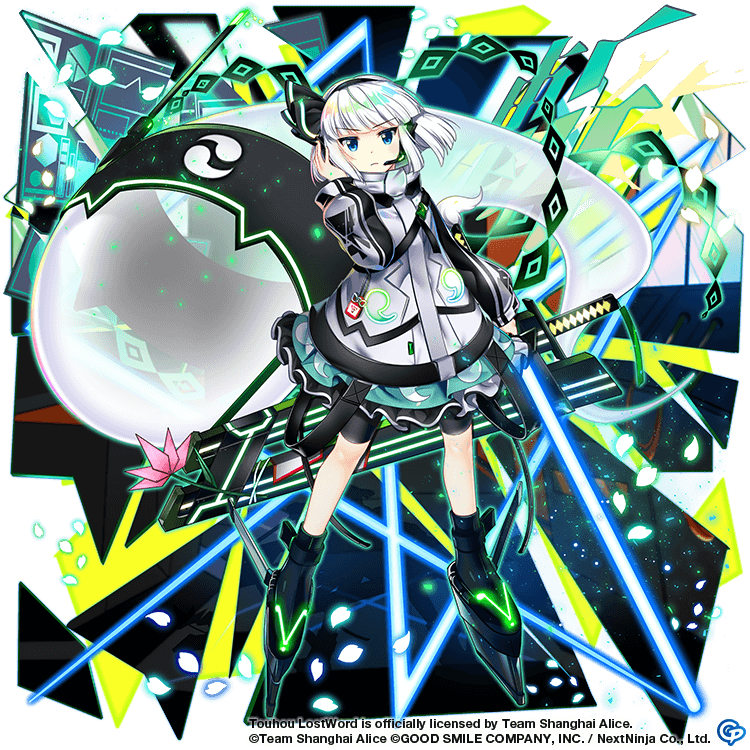 +Utterly incredible damage in both short and hard fights, both on her Last Word and Spell Cards
+Solid teamwide buffs, including Yang DEF, Yang ATK, Agility, Accuracy support
+Great Breaking ability, including P0 Water and Sun on basic shots
+Minor amounts of Paralyze on her Spell Cards, though it mostly only serves as Accuracy support for her own Spell Cards and those of her teammates. 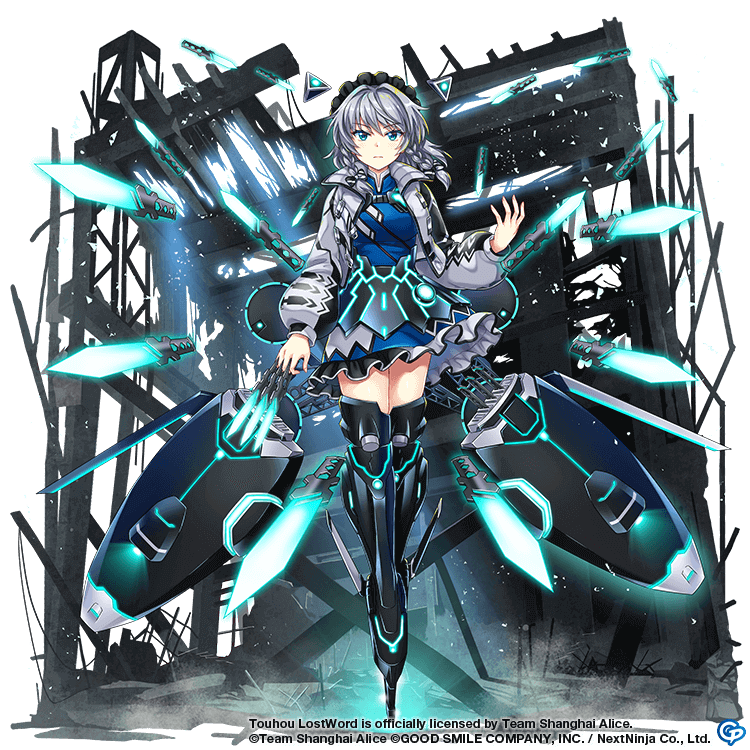 Sakuya Izayoi has always held a large debt toward her mistress, Remilia Scarlet, for taking her in and allowing her to serve as head maid in the Scarlet Devil Mansion. Her time manipulating powers were always unique compared to the youkai she lived with, something she somewhat took for granted until the events of the world of B3 sealed all of their powers. Now she was no different from the sealed mikos and magician that were her current allies- until obtaining a new set of cyber knives and accessories. With the combined powers of the mansion’s residents resonating from within her new suit, she can carry out duties at even quicker times than before. And for a maid that could already manipulate time, that’s pretty fast.

Her knives, the essential ingredient for all of her previous attacks, are now imbued with a heavy chill, perfect for slowing targets’ movements. Her first passive, Flash-Freeze Paper Knives, starts the wave off with giving one target a Freeze anomaly, which is not incredible on its own but definitely more helpful than other passives. To follow up, both of Servant’s spells, Scarred Soul: Soul Sculpture and Light Speed: C. Ricochet, target all the opponents and inflict another Freeze anomaly while applying an extra barrier of Freeze to the targeted individual. With the proper order of actions (since the spells’ Freeze anomalies last 2 turns while the passive lasts for 3), one enemy can have 5 Freeze barriers applied at once, the perfect victim for another Friend capable of breaking those anomalies.

Not that Sakuya herself is lacking in elemental breaks either. Her Focus shot, Magic Star Sword, contains a Moon break at 0P whenever the need for spamming Moon is required. Additionally, her two spells include a decent mix of Moon and Metal breaks, even if not every bullet is an element. Light Speed: C. Ricochet is especially notable, having 2 Metal breaks upon boosting twice. This would usually be a detriment for any other Friend, but Servant is always prepared to serve and can build up Spirit Power rapidly thanks to all of her skills and her third passive, Vampire Legacy.

The best servant can care for themselves as well as others, the latter of which Sakuya has many options for. module[Hobgoblin] and module[Fairy_Maid] sum up for a total of 5 levels of Agility UP for all allies, with module[Tupai] doing 3 levels of Accuracy UP. Even while sealed, her ability to manipulate time lets each Boost raise the party’s Accuracy and Graze raise the party’s Agility. It is true that some allies do just fine with their own Accuracy buffs and Agility buffs (especially on better Slicing-based characters), but Servant is always an option for providing a large assist, especially when against more evasive opponents.

To finish off, Sakuya unleashes her entire knives collection during the properly-named Cosmopolitan Museum. With a final 3 levels of Agility UP (which when combined with her other abilities, allows her to max out her Agility with 10 levels) and 4 Yang ATK UP, Servant puts those Agility buffs to good use with heavy Slicing scaling. Considering how heavily she has buffed her Accuracy from the start, there is little doubt that many of these knives will connect. Oh, and 3 extra Freeze barriers are applied to the target for good measure. Of course, the main detriment is this knife collection can only be shown to one target, meaning Sakuya is locked out of using her Last Word for convenient All-target farming.

This still doesn’t make her a bad farmer whatsoever, as she has some of the heaviest Solo-target damage in the game. Furthermore, her spell cards are strong on their own, so much that she can farm the final Hifuu LostWord Chapter 1 stage without any Limit Breaks, making her a great and efficient farm for that specific situation. And her wide array of buffs and abilities makes her far from being only situational. Servant might have a very busy schedule, but don’t let that stop you from recruiting one of the most flexible units for harder fights in the game. 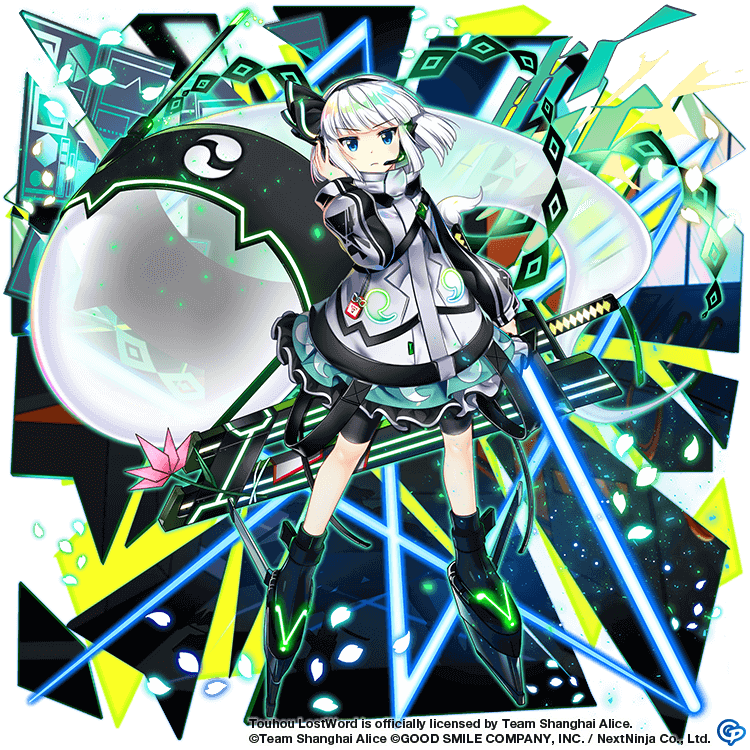 In another time, in another place, █████ is lost. In this catastrophic cataclysm, Youmu Konpaku may have lost her very nature as a half-phantom and the blades of her heritage are now dull and powerless, but she won’t let that stop her! Using her blades of light, she’ll rise up against the evil Lunarian empire with the power of Natural Force, with a mysterious ghost granting her guidance and powers - completely unlike any other light blade wielding individuals or tales, I assure you. In this form, since her normal talents are sealed away, she’s got a bit of help - Roukanken and Hakurouken call upon the power of lightning, thanks to the kappa hijacking the powers of Mononobe no Futo and Soga no Tojiko (two taoists you’ll meet in the future!). Her Trance Headset, based on Toyosatomimi no Miko’s earmuffs (again, a taoist you’ll meet in the future), plays songs based on the performances of the Prismriver sisters - which make Youmu and her allies fight harder. Perhaps it’s a morale thing. Even her very phantom half is hooked up with tech - turned virtual as a result (which basically just means it turns very small outside of battle and gets stored in her clothes). Finally, her outfit, hooked up with the Electric Neural Spirit Root Net, provides Youmu with the power of spirit manipulating devices based upon the power of Yuyuko Saigyouji’s lingering attachments.

Complimenting this all is an array of powerful attacks. Firstly, both of her basic shots have 0P Breaks - Phantom Half featuring 1 Solo targeting Water Break, Bizarreness of Six Realms possessing 1 Solo targeting Sun Break. Next, Sword Skill: Cherry Blossom Flashing features 3 levels of Yang DEF UP (3T) for the digital swordswoman, plus All targeting 0/1/2/3 Water Breaks (and one Sun, which is a nice bonus at times) for 0/1/2/3 Spirit Power, alongside solid Hard and Slicing plus 1 layer of Paralyze to all targets (2T) with 1 more to the primary target - not enough to Break with, but enough to bolster its damage via the Evasion DOWN. Reincarnation Sword: Slash of Circular Vicissitude (..that sure is a mouthful, Youmu) features the same Hard and Slicing Scaling and Yang DEF UP and Paralyze, alongside 3 Sun and 2 Water Solo targeting Breaks in total at 3 Spirit Power.

As a whole, Youmu’s a fantastic samurai, and a set of beam blades you definitely want on your side.