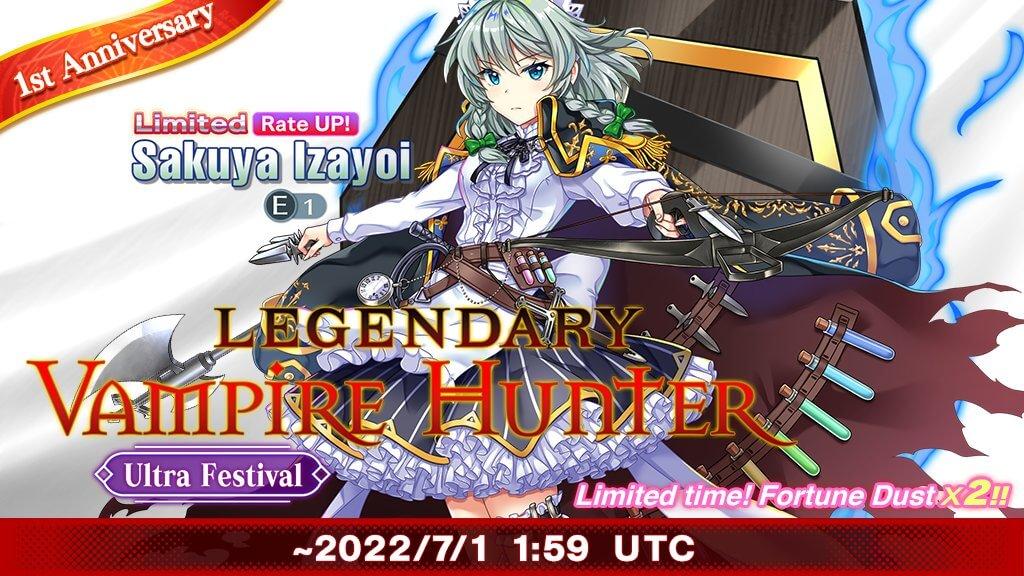 Maybe, leaning towards yes. Sakuya provides a powerful set of tools that can help her do a great deal of damage. While she may have a selfish kit, Sakuya compensates for this with a great deal of barrier breaks in terms of Sun and Metal breaks. However, there are some banners that overlap with her banner. Some notable mentions would be B3 Kaguya Houraisan, B3 Watatsuki no Toyohime, and L1 Keiki Haniyashushin/L1 Kutaka Niwatari’s banners. While Keiki and Kutaka may not be as enticing as an Ultra Festival character, B3 Kaguya and B3 Toyohime are certainly ones to consider before pulling for Sakuya.

Just like the other Ultra Festival banners, Sakuya does not have a step-up banner. However, Sakuya’s banner does have 2x dust if you use God Cubes to pull on these banners. 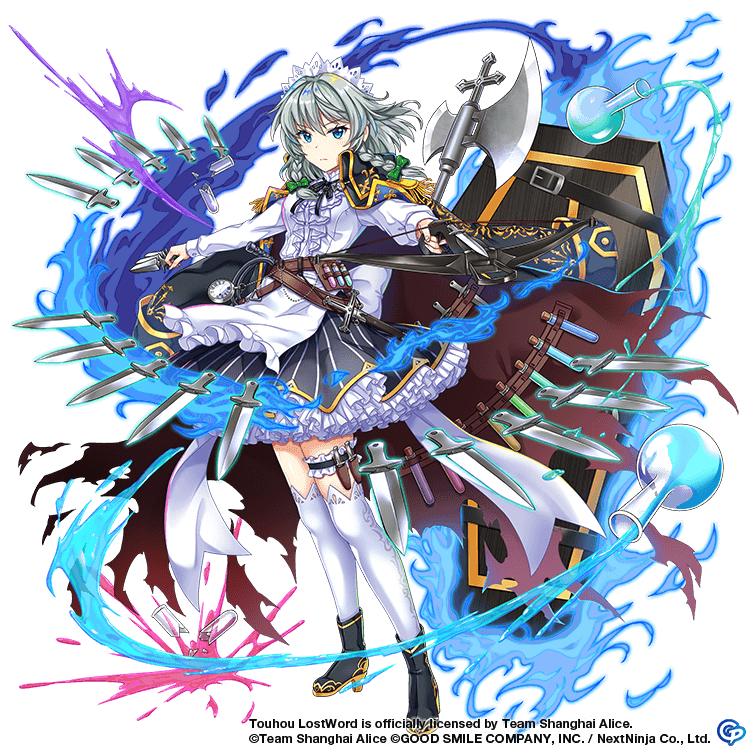 + Amazing power generation with her Spell Cards and skills.
+ A good spread of elements on her spell cards with a spread of Sun and Metal.
+ Last Word has good damage with setup.
- Low Yang ATK up built into her kit.
- Selfish character with little utility.

In a strange twist of fate, Sakuya Izayoi, who is usually known as the maid of the Scarlet Devil Mansion and effectively second in command, is hunting the inhabitants of the Scarlet Devil Mansion. She especially seeks to destroy the vampire mistresses, Remilia and Flandre Scarlet, who, in other worlds, she is usually sworn to protect. She still employs her time manipulation powers in her Universe E1 form, making her a fearsome enemy, but she also employs a large array of vampire hunting weapons, such as crossbows, knives, poisons, and all kinds of contraptions that Sakuya doesn't normally use. Outside of believing that vampires are the sworn enemies of humans, she's generally amicable, and will help you in battle

Sakuya’s role can be summed up in a few words: Destroy anybody who is weak to Sun or Metal, and hit extremely hard. With her CRIT buffs being nearly instantly capped with a combination of her 1st skill, Pseudo Holy Water, her 3rd skill, Silver Cross, and her ability, Capable of manipulating time (Distorted) which provides even more CRIT buffs, she can effectively cap these buffs for herself and make her attacks hit extremely hard. This synergizes with her wide range of killers which proc against Youkai and Parallel Existences. Sakuya’s 1st Spell Card, Conjuring: Mesmerizing Misdirection, and her 2nd Spell Card, Illusion World: The World, do great damage alongside her Last Word, Imperfect Outsider.

Her skills also help augment her power even further. With her 2nd skill, Lunatic Pocket Watch, she gets 2 levels of Accuracy for 3 turns and 1.5 P. Both of these effects help make her more consistent, use her barrier breaks effectively, and output even more damage. This skill also gives Sakuya Charge which makes her much easier to support with other characters. With these powerful tools at her disposal, Sakuya can make sure that the vampiric menaces are nothing but figures of the past long forgotten.