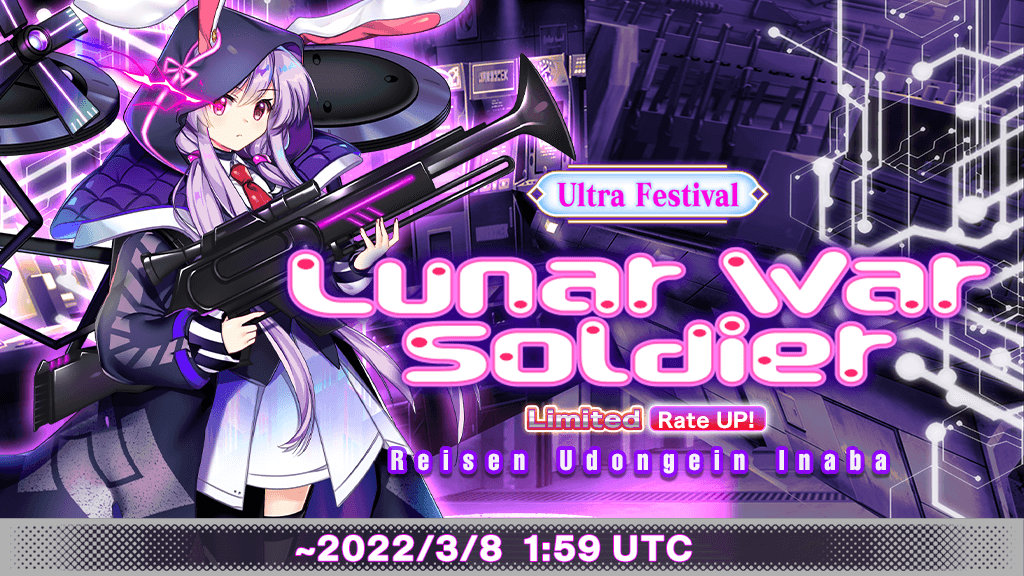 Are you indecisive if you want a powerful unit that focuses on offense, defense, or support? Good, because the Lunar War Soldier is here to not care and do good in all of those fields. Reisen holds onto a strong Yang, All-targeting Last Word nuke along with a heavy assortment of guns and skills with helpful support that includes but is not limited to Evasion debuffs and team barrier restoration. And of course, she is a cute rabbit to boot. Her Last Word is also heavy in the Moon break department, serving well for the Moon EX battle and its extended runtime.

As with the other Lunar War combatants, Reisen is an Ultra Festival Friend that will require 250 Exchange Points to exchange for and either duplicates or Divine Paper Dolls to Limit Break. She might be more difficult to max out compared to her L1 and A8 selves, but B3 has the tools to prove why she is on top. 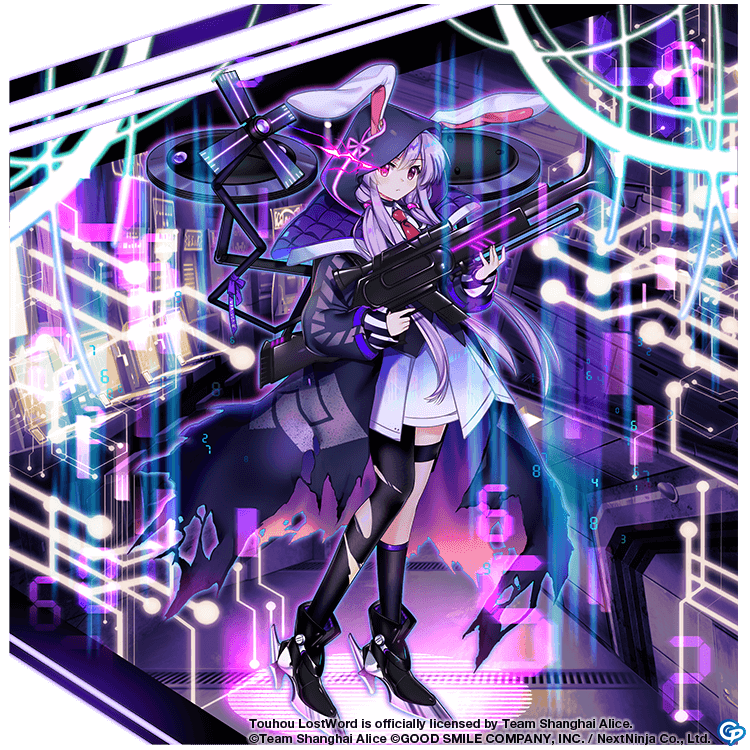 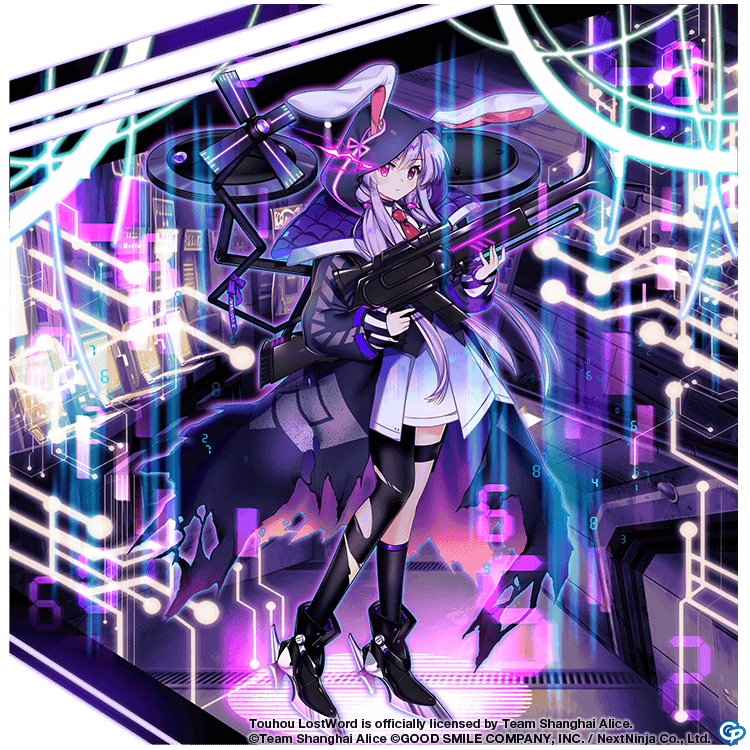 As the last (but certainly not least) of the Lunar War Friends, Reisen definitely holds the most interesting position of the six. She originally was from the Lunar Capital itself as a moon rabbit, constantly undergoing training like the other rabbit soldiers. This has made her used to the original combat style of the lunar rabbits. In the original universe, Reisen ran away to the Earth while the Lunar Capital participated in a war upon Apollo 11 landing on the Moon’s surface. This led to her meeting with other Lunarian refugees from the Moon, the sage Eirin Yagokoro and the exiled princess Kaguya Houraisan. Under Eirin’s tutelage, Reisen learned even more with a focus on medicine. While it is unknown if B3’s Reisen went through the same circumstances as L1’s, her determination to save her master and princess causes her to keep fighting and take on a new set of prosthetic eyes and guns to make up for her lost wavelength-manipulating powers.

Even with a sealed ability, Soldier makes up for the inability to use finger guns by replacing them with heavy laser and missile firepower. Both of her basic attacks hold utility with elemental breaks at 0P, with Earth on Lunatic Machine Gun and Moon on Lunatic Rifle. After that are her spells, which emphasize crippling her opponents further. Illusion Wave: Red-Eyed Hypnosis (Mind Blowing) holds 3 Moon breaks and decreases all opponents’ Evasion by 2 levels for 3 turns, with 1 further level given to whoever was initially targeted. Indolence: Life and Spirit Stopping (Mind Stopper) does the same but for Accuracy, which is not as useful as Evasion debuffing. However, it can also break any Paralyzed barriers at 3P, making for helpful breaking along with its 4 Earth breaks.

Moon Salvo (Lunatic Full Burst Mode) is a Last Word that does a great variety of benefits. First, it does 2 additional levels of Evasion and Accuracy DOWN. Along with that, Reisen will boost her own Yang ATK and DEF by as many levels as her Awakening level, ranging from 1 to 5 levels UP. This is a trait that her master, Eirin Yagokoro, has in her own Last Word…it seems like the student is taking some inspiration. The Yang DEF buff helps with her large Hard scaling (110%/110%/130%/130%/150%/160%), making her do even more damage. Since the bullet lines have a 1-3-1 spread and skills such as Medical Poison can grant her 1.0 Spirit Power at the start of battle, this can be a devastating attack to unleash turn 1. Even after all of that is over with, Reisen checks on her party’s status again by restoring 1 barrier for everyone on the team.

All of her skills share that concern for her party, both inspiring them to fight and taking care of their status. The Medical Poison is shared by everyone, healing the party’s HP by 25% of Reisen’s max health. Even though Sniping only buffs Reisen’s own Yang ATK by 2 levels for 2 turns, she remains supportive by Charging herself, allowing for everyone else’s Last Words to activate first and debuff the enemy before she unleashes the offensive finale. Definitely the best support-wise is her Phase Shifter, which increases Yin DEF by 3 levels for 3 turns while adding another barrier into the mix. Sniping and Phase Shifter also increase the party’s Spirit Power by 0.25, providing small Spirit Power support to those who need it.

A few other tricks up this rabbit’s sleeves are the party-wide Yin DEF and Yang ATK buffs from her character ability, which is achieved from Boosting and Grazing respectively. Even when sealed, Reisen can find a way to manipulate the waves in her team’s favor. Auto Medic is one of the few helpful passives of the game, due to giving Reisen 20% HP restoration per turn, allowing this all-rounder to stay on the field for extensive periods of time. Overall, there are no true downsides to Soldier’s kit outside of not doing literally everything in the game, which is never a standard for any Friend.

Even with her impressive newfound strength, it does not mean the Lunar War is easy for Reisen to face. Having to fight against former moon rabbit comrades is something that she now has to follow through with and truly question if it is right. It is easy for the original Reisen and even the one from the Eternal Night to be confident in abandoning the Lunar Capital, but is that truly the same as fighting against the Lunar Capital? Soldier knows their initial strengths, and they only seem to be stronger when she begins to fight back. Does she truly have the heart to battle with all of her strength, even when the odds seem unwinnable? Fortunately, she is not alone in her struggles, seen by our five previous Lunar War Friends.