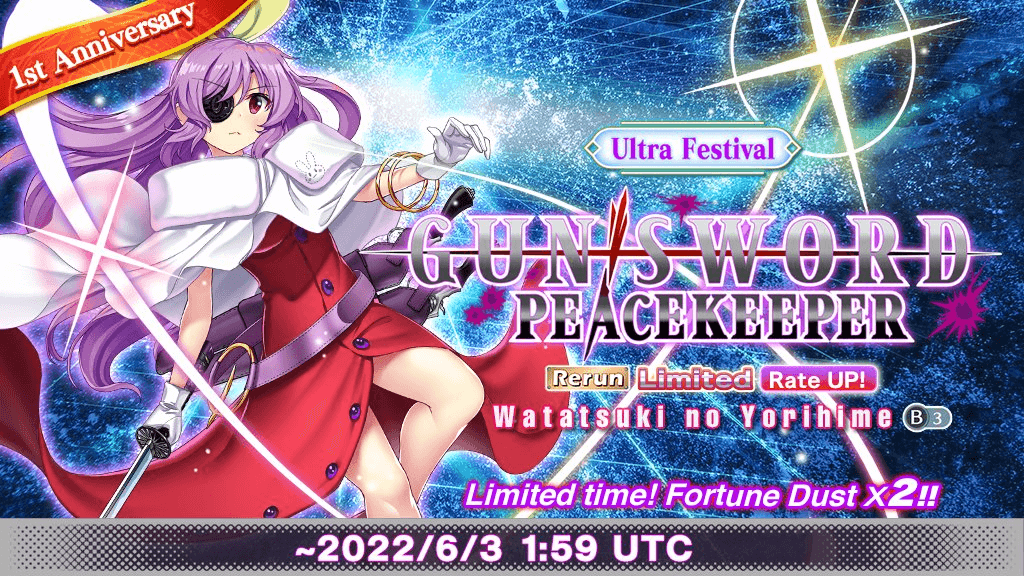 Yes, with a small veer toward Maybe. Not much has changed regarding the Gun-Sword Peacekeeper's strength between her initial debut and now. Sure, there are a few Friends more powerful than her, but she remains strong as one of the most devastating attackers, heavily buffed in Yang and CRIT ATK for both herself and the rest of the team. Her elemental access to Moon and a few other elements is rather good as well, solidfying Yorihime as an easy pick for offense and supportive buffs.

E1 Flandre Scarlet is leaving shortly (for real this time, since they extended her initial Prayer by a week...), so Yorihime will soon be a better pick meta-wise in case you missed the vampire. It helps that the rerun lasts until June 3rd, giving you a somewhat extended time to pull for her that other recent Ultra Festival prayers have had as well. B5 Reisen Udongein Inaba is still co-running, but Yorihime is arguably better in terms of shredding through foes. Otherwise, there are surprisingly less siginificant contenders this time around, outside of the ongoing 1st Anniversary Special Prayers.

As an Ultra Festival Friend, Yorihime costs 250 Exchange Points to exchange for, along with requiring Divine Paper Dolls or duplicates to Limit Break. There may be no God Crystal Step-UP, but 2x Fortune Dust is obtained upon pulling with God Crystals. 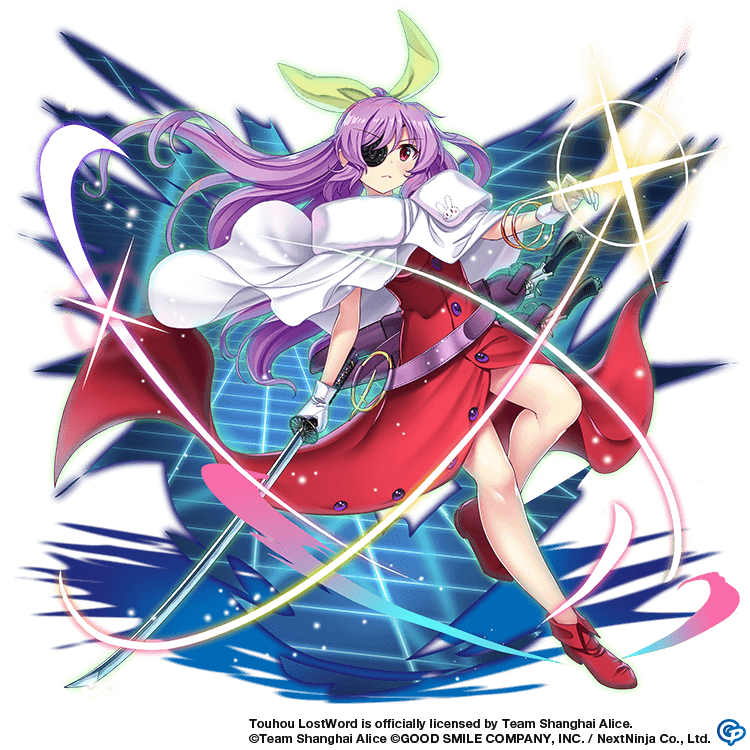 + Slicing + Killer bullets + Moon-only = Ridiculous Last Word
+ Great Spirit Power gain on spells and skills (2.75 Spirit Power turn 1)
+ Variety of party Yang ATK and CRIT ATK buffs with YANG DEF and CRIT DEF debuffs
+ Barrier breaking with several elements and Paralyze/Freeze/Poison anomalies
- Cannot max out a buff all by herself (but she doesn’t even need to) 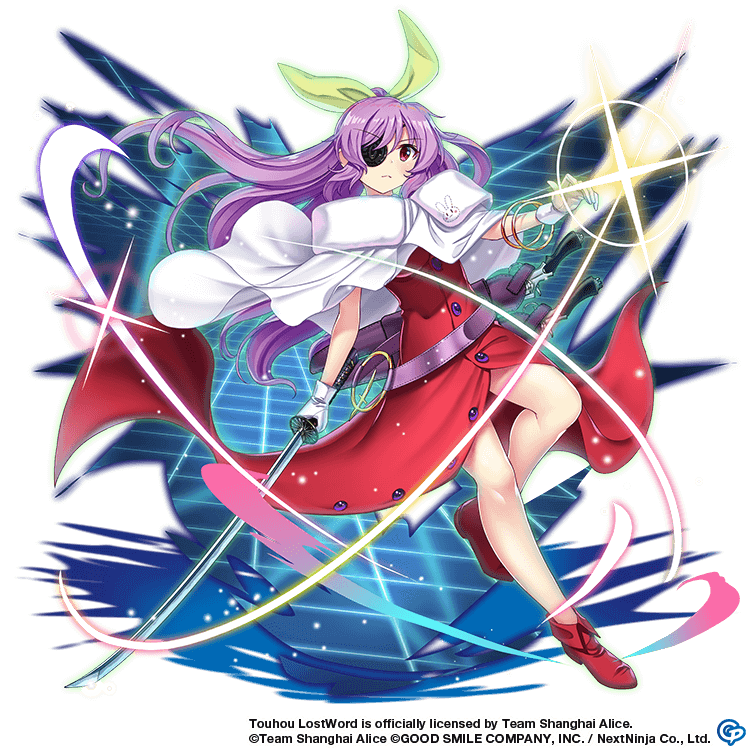 Ever since her first appearance in the manga Silent Sinner in Blue, Watatsuki no Yorihime has established herself as one of the most powerful characters in the Touhou universe. The Lunarian’s pure powers are already known to be strong on their own, but the princesses take it to another level. In the manga itself, she single handedly defeated the invading Marisa Kirisame, Sakuya Izayoi, and Remilia Scarlet (and a tie with Reimu Hakurei) in battles of bullets, showing off her wide assortment of godly powers with the promise of having even more. Under the tutelage of Eirin Yagokoro (called Lady Yagokoro by the Watatsukis, as Eirin is only her name on Earth), Yorihime was able to master godly possession long ago and study further for many years. In interviews, even ZUN himself admits that he cannot add Yorihime as a boss in a traditional Touhou game, as the bosses in the games need to be winnable. Fortunately in LostWord, she can be used on your side. And as a guardian of the Moon’s Peace Temple, she is somehow even more powerful.

Yorihime’s role is the same as before: hit the opponent really hard in a short amount of time. This time around, she has good methods of building that power thanks to Foreign God Skanda’s 1.5 Spirit Power increase as well as 1.25 more Spirit Power from each use of her second spell, Divine Spirit: Amatsu-Mikaboshi. Not only do these allow her to access more bullet lines, but each of her spells can break different anomaly barriers at 3P: Paralyze for Divine Spirit: Hono-Ikazuchi, Freeze for Divine Spirit: Amatsu-Mikaboshi, and Poison for her Last Word, Kannagi - Warrior Shrine Maiden. Something special about Divine Spirit: Hono-Ikazuchi is that it inflicts 2 Paralyze anomalies before striking, meaning at 3P it can break 2 barriers without any elements, as long as the opponent isn’t immune to gaining Paralyze.

Yorihime’s other breaks from elemental attacks are more varied, ranging from a mix of 3 Fire/Wood breaks on Divine Spirit: Hono-Ikazuchi to Kannagi - Warrior Shrine Maiden’s 6 Moon breaks, a death sentence to anyone weak to Moon. As with any other nuke, her Last Word is the key to her damaging potential, seen from its heavy Slicing values (80%/0%/100%/0%/120%/120%) and many Killer bullets. The amount of Killers target a large portion of the LostWord cast, meaning she makes great use of her CRIT ATK UP from Graze and Unusual God Matara (2 levels for 2T) and CRIT DEF DOWN from Eccentric God Hotei (2 levels for 2T) and using her Last Word (2 levels for 2T). As if that wasn’t enough, she can get 4 levels of Yang ATK UP from combining Foreign God Skanda with her Last Word’s effects. To top it off, each Boost is extra Accuracy support along with the Evasion debuff that comes from her Last Word.

With so many different types of buffs and debuffs, Yorihime’s kit does not exactly specialize in any of these aspects. Still, 4 to 6 levels of any of these stats is impressive enough and in a way allows for other Friends to synergize well with her and utilize their own skills. The Charge given by Eccentric God Hotei means that other Friends can unleash debuffs from their own Last Words before Yorihime finishes them off. Any Friends that apply Paralyze, Freeze, or Poison anomaly already benefit from Yorihime’s anomaly breaks, and anyone can enjoy the buffs Yorihime casts on the entire team, especially Yang and CRIT attackers. Yorihime’s power is truly unmatched by most other singular unit in LostWord, as expected by someone with access to millions and millions of gods.

Even with her limitless power, Yorihime still cannot win the hearts of all of her people. Being linked to Eirin, the sage who escaped to the impure Earth with Kaguya Houraisan, the Watatsukis are somewhat looked down on, even if they still are emissaries of the Moon. The ability Watatsuki no Toyohime possesses to travel to the Earth, while practical, doubles as a curse that links her to the impurities of the Earth that the Lunarians avoid at all costs. Additionally, Yorihime's own ability of summoning gods by her side only turned out to raise more suspicion onto her.

In Silent Sinner in Blue, the sisters worked hard to clear their name by preventing another Moon invasion from Gensokyo. Has this Yorihime experienced similar events in her own world, or have they been entirely different? You can read through the story of Code Bm3 to find out...or view some more details about them in the lore article below!