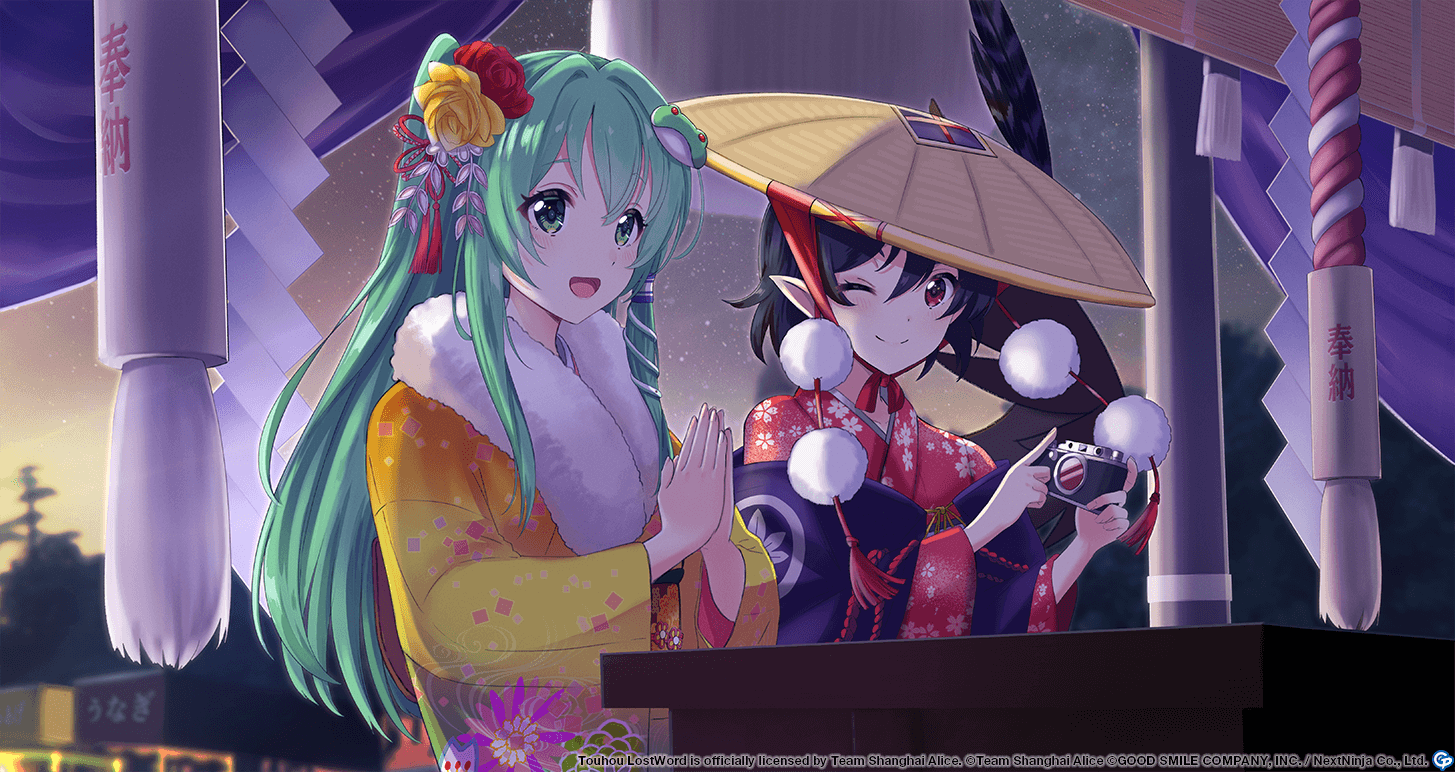 Story 1
Sanae Kochiya is a wind priestess of Moriya Shrine. She dons her furisode for the New Year's prayer and prays with Kanako and Suwako. Her prayer is to resolve more incidents than Reimu... probably.
Story 2
Aya Shameimaru is a crow tengu on the hunt for a good scoop. Reporters like her are busy during the New Year. She wears her New Year furisode and goes to the New Year party held by the tengu. Later, she pokes around and introduces herself to others in order to find a good scoop. Hopefully the Bunbunmaru Newspaper will have a good year.
Story 3
Hatsumoude originally comes from the practice of toshigomori, where the head of the household/village (or its representative), stays overnight at a shrine celebrating the local gods on the last day of the year. Going the entire night without sleep while continuously praying is a staple of the practice. Should they fall asleep, it is said that they will grow gray hairs and wrinkles.
Story 4
Hakurei Shrine is full of visitors for the New Year. Normally, business is slow at the shrine, but the start of the year is bursting with activity. Maybe Reimu's wish to the Gift-Giving Phantasm will actually come true!
Story 5
You have been tasked with performing New Year's courtesy calls while Reimu is busy attending to the temple's visitors. Marisa and Sanae are with you on your journey through Gensokyo. This is your first New Year's celebration while in Gensokyo. After giving thanks to those who have helped you in the last year and receiving your otoshidama (New Year's gifts generally consisting of money), you hope that the coming year will be a good one.

Busti's Stall Diary Chapter 521: We couldn't have done it without your support!
Yes, we’re all excited for the next Saberface… Source …But before we all lose our…
Which will you roll first? GSSR or Castoria
Which are you rolling first? Click to view the poll. I’m interested to see peoples…
Are craft essences just glorified fanarts?
textextextextextextext 16 posts - 13 participants Read full…
FGO 7th Anniversary Servant Poll Thread
So, we’re about a month out from FGO’s 7th anniversary. We’re about to be due for…
Busti's Stall Diary Chapter #520: 7 years and going strong, it's the journey of a lifetime!
7 years ago, a small company in the recesses of urban Japan collab’ed with a doujiin…
Read More