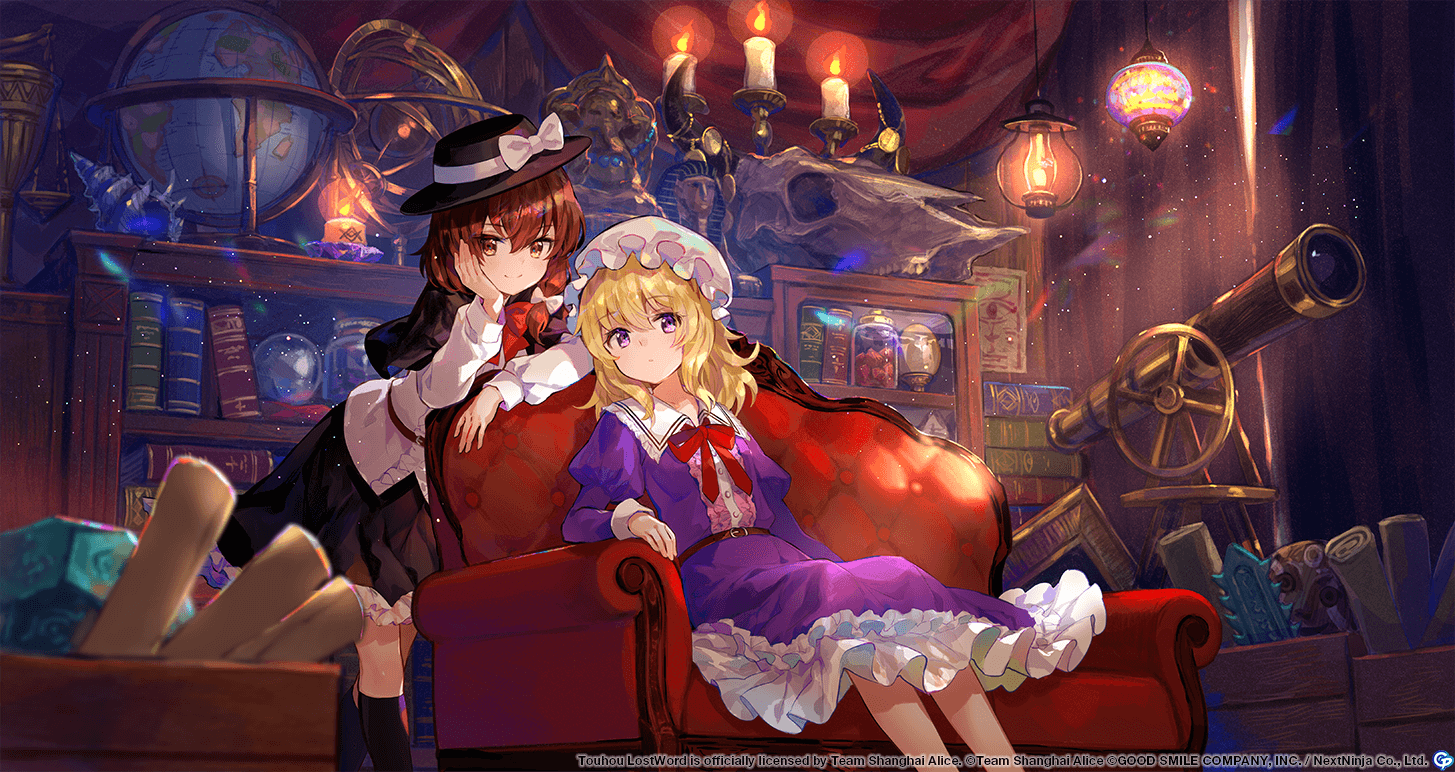 Story 1
This is a story that may or may not have happened in a certain fragment of a certain layer. ―Hello, Ma-Mareh-belly. ―How are you, Mey-re-verie? "Hehe, I'm fine." Maribel Hearn felt dejected. She wondered why her name was so difficult to pronounce. The language spoken in this country has too few phonemes to pronounce her name properly. It was very distressing for her to hear her name being butchered because it is a part of her identity. There was not a single person she could call her friend. Contrary to what she herself believes, Maribel Hearn is one of the most popular girls on campus. She has bright golden hair and porcelain-like skin. She is like a princess right out of a fairy tale. But above all, the most alluring thing about her is her glorious dreamy eyes.
Story 2
Renko Usami is a member of the occult circle known as the Secret Sealing Club. She goes by the name Renko. Back in the day, she was just a delinquent. (M.H.) Maribel Hearn is a member of the occult circle known as the Secret Sealing Club. She goes by the name Merry. Back in the day, she was just a pretty little doll. (R.U.)
Story 3
―I heard Miss Usami entered a prohibited area again. ―What?! Isn't that illegal...?! ―Let's stay away from her. "Who says I went in there? Do you have any evidence?" "Well, if you are done with your questions, I'll be leaving," said Renko as she walked away. Despite being in her prime, the smile on Renko Usami's face was pretty dry as she walked out of the counseling room. The only thing troubling Renko was that there was not a single soul who could set her free from the tedium of this world. Speaking of which, there was one student who was always hot on her heels for the title of the top-ranked student. It's like they were playing a game and taking turns being number one. Renko remembered seeing her name quite a few times on the honors students' list. Her name was―
Story 4
The Secret Sealing Club is one of the clubs at Renko and Merry's university. It puts up a front of a worthless club, taking every penny of the budget allotted to them despite having hardly any official activities. However, the truth behind the scenes is that it's a serious delinquent club that involves activities such as breaking into prohibited areas or finding random holes in commonly present barriers that they never report. Sometimes they themselves take the initiative to create temporary holes in the barriers to go through them. The club room used to be a counseling room. However, that's a thing of the past. Universities don't usually have a counseling room (It's a university, after all... not some junior high school or high school.) It was a room made exclusively for Renko Usami, but it had not once served that purpose. It was the most meaningless room on campus. ―The Secret Sealing Club belongs to Renko Usami and Maribel Hearn. This became common knowledge to all the university authorities and students. And at the same time, the room gained some significance for the first time. No one ever complained about it. It was as though the room did not exist.
Story 5
"I've decided! I'm going to call you Merry. And you can call me Renko." "Miss... Renko?" "Hm, no, just Renko is fine." "R-Renko." Ever since then, both students and professors started referring to Maribel Hearn as Merry. No, it wasn't synchronicity. It was all thanks to Renko. For the first time, Maribel Hearn felt like a normal human being. And for the first time, Renko Usami felt excitement in life. Not only had the clouds of gloom they lived under cleared away, but they each gained one more friend. Renko didn't think much of her ability that allowed her to tell the current time and place. Merry didn't want anyone to know about her ability to see the borders of boundaries. But they sat there laughing together when they learned about each other's abilities. "You're such a freak!" they laughed.

Evil bones team
So I recently counted how many bones i needed and found our that I needed 2000 evil…
Castoria/Caster Artoria's command codes recommendations
Hi, since Castoria’s arrival in NA is very soon, I would really appreciate…
Servant Planner broken?
Is the servant planner busted for anyone else? All my servants except Mash got wiped…
Interlude Campaign: Part 13 Discussion
Hi! I haven’t seen a thread for discussion of the new Servant Interludes, so I thought…
Busti's Stall Diary Chapter #500: Woah, we're halfway there
Well, who would have thought that we would ever get this far when things started? Half…
Read More