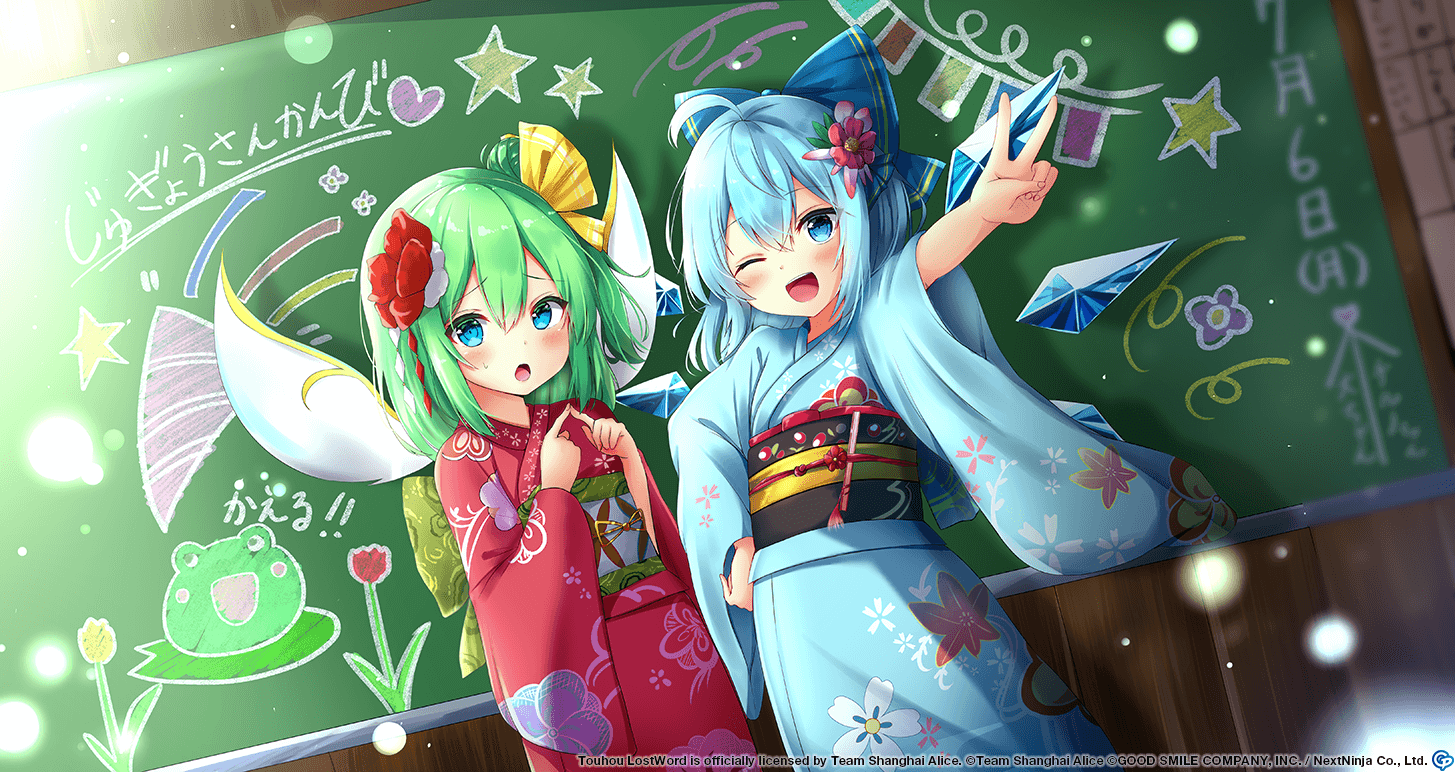 Story 1
Cirno is an ice fairy and hangs around the Misty Lake. She is pretty strong for a fairy and is capable of freezing anything and everything. But she does have one weakness... she's not very smart. At school, she is much better at PE than studying.
Story 2
Where exactly Daiyousei lives is a mystery. However, she can usually be found in the company of Cirno. It seems that she often takes the time to go and visit the school. She does this because she wants to learn how to protect her friends even though she cannot shoot bullets as powerfully as Cirno and the Three Fairies.
Story 3
It is generally thought that the tradition of Shichi-Go-San, which means Seven-Five-Three, comes from an age when medical care wasn't nearly as developed, and children were said to be offspring of the gods until they reached the age of seven. A child growing up healthy despite the harsh living conditions was an exceptionally joyous occasion for their parents. That's why they paid respects to the gods and celebrated when their child reached the age of three, five, and seven.
Story 4
During The Steps to Achieve Fairyhood?! event, the fairies learned what it means to grow... To grow is to surpass one's limits and to take the next step on the path of life. It's about progressing and becoming able to do things that you couldn't do before. What lesson will Cirno, Daiyousei, Lily White, and Clownpiece learn in the next special class?
Story 5
It probably wasn't just the fairies who grew. You, who learned with them also grew, did you not? The fairies learned about duty, effort, training, determination, food, and work. However, the lessons failed as things got out of control when they interpreted these concepts in their own unique way. But failure is not something to be feared. It is only through failure that one can grow and further improve. One must find the silver lining to every cloud.

Evil bones Farmers Gang
So I recently counted how many bones i needed and found our that I needed 2000 evil…
Castoria/Caster Artoria's command codes recommendations
Hi, since Castoria’s arrival in NA is very soon, I would really appreciate…
Servant Planner broken?
Is the servant planner busted for anyone else? All my servants except Mash got wiped…
Interlude Campaign: Part 13 Discussion
Hi! I haven’t seen a thread for discussion of the new Servant Interludes, so I thought…
Busti's Stall Diary Chapter #500: Woah, we're halfway there
Well, who would have thought that we would ever get this far when things started? Half…
Read More