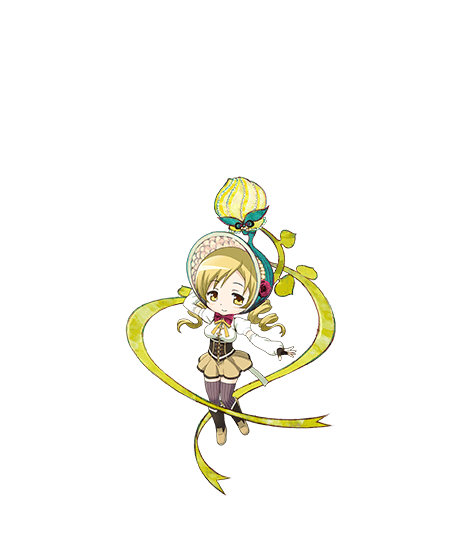 Doppel Detail (May Contain Spoiler)
The master of this emotion trusts not in it and battles on, regardless of its presence. This Doppel is very small compared to other Doppels and always sits on its master's head, so the master is hardly aware of it. It is doubtful that they communicate, so its master fights normally while it supports her. It is small and looks unreliable, but its vines are powerful enough to penetrate any enemy.

The name Candeloro derives from a medieval tradition given to children born on February 2nd, the day of the Pagan holiday of Candlemas, or "feast of candles".

Within Candeloro's barrier there is a house decorated on the inside with Christmas greenery. Common belief is that if you fail to take down the Christmas Greenery on the eve of Candlemas, you bring death to all of those in your congregation.

The tag on Candeloro in the PSP game Madoka Magica Portable reads “CANDELORO du Polignac”. It could be a reference to Yolande Martine Gabrielle de Polastron, Duchesse de Polignac, a member of Marie Antoinette's court who was greatly famed for her beauty. Gabrielle de Polastron was considered by many of her friends to be elegant, sophisticated, charming and entertaining.

Mami’s doppel ties up those who wish to leave her and could be seen as Mami’s desire to not be left alone, since Kyoko Sakura left her once before. In her Anime Japan 2017 card description (displayed prior to the game’s release), the doppel's flaws are described as being "strongly opinionated and doesn’t do a very good job of listening to others” due to resembling her master, the strong-headed Mami.

Candeloro's attacks resemble those of Mami's. She has a simple rifle-like attack and can bind using her ribbon arms. She can also take possession of a familiar to shoot a Tiro Finale-like attack, except it shoots flames rather than ammunition.

The most glaring aspect of this doppel is Mami’s fondness for tea, as Candeloro’s barrier is a never-ending tea party with a rainbow bridge and apple trees. Even her familiars resemble Kyoko and Madoka Kaname (or Sayaka Miki depending on the timeline) and attack with their signature weapons.

Cups symbolize healing and immortality, which reflects Mami’s wish to not die from a car accident. Apple trees also symbolize immortality. Rainbow Bridges, like those in Norse mythology, bridge the Earth to the divine lands. Black clouds are a common symbol of inevitability and death, referencing Mami’s frequent death throughout different timelines. The water that flows in her barrier is red, likely blood as blood is a symbol of life forces.