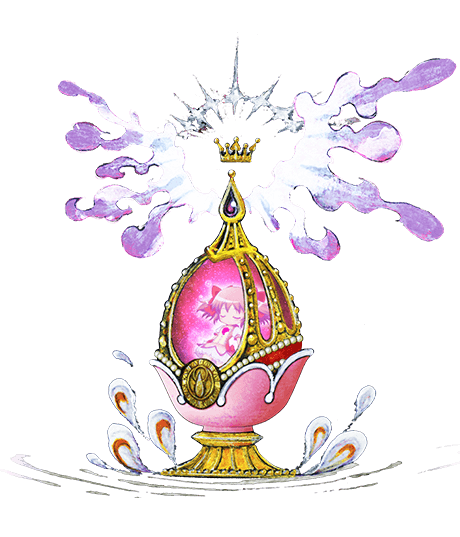 Damage ALL Enemies
Doppel: Deals 902% damage to all enemies.
Damage Cut ALL
Reduce all allies Damage taken by 50% (3 turns).
MP Restore ALL
Restore 36.5% MP for all allies.

Doppel Detail (May Contain Spoiler)
The master of this emotion tries to save all of existence. This Doppel appears as a huge floating Soul Gem. Once it is summoned, it creates an existence within which all things around it are consumed, and then takes control of everything within that existence. After that, it floats higher into the air and a shower of light arrows rains down. While all of this is happening, the master of this emotion sleeps inside the huge Soul Gem.

Gretchen is the name of Faust’s lover in the play by Johann Wolfgang von Goethe.

There are multiple references to Faust throughout the original anime series. Literary studies have suggested that Faust refers to the girl as Margarete (meaning pearl) at the beginning because of her purity and innocence, and changes to the diminutive Gretchen after their intercourse to deride her spoiled purity. In the same way, the fact that this witch is named Gretchen, rather than Margarete, could represent the corruption of Madoka's soul.

Towards the end of the play, Faust attempts to save Gretchen from being executed but Gretchen renounces him and ascends to heaven. This could mirror how Madoka declined making a wish for selfish reasons and instead sacrificed herself for others. As the Witch of Salvation, this could reflect Madoka’s desire to save everyone.

In her Anime Japan 2017 card description (displayed prior to the game’s release), the doppel is described as having “powers similar to that of a god’s”. This is likely a reference to the fact that Madoka becomes a god of magical girls. Her doppel even bears a crown and angelic wings mimicing the ones she bears as Ultimate Madoka.

The actual large, black, cage-like form shown in the anime’s episode 12 is likely the outer form of the witch with the real form being the soul gem shape deep inside. When Madoka releases her doppel, her form is surrounded by the cage-like barrier of the form seen in the anime. According to witch animator and designer InuCurry, Kriemhild Gretchen's outer form is meant to look like the bottom half of a sand timer and Walpurgis Nacht the top half. Homura Akemi’s shield also bears a sand timer as part of its mechanisms.

The fact that Madoka sleeps within her doppel means she’s not aware of her final form as Kriemhild Gretchen. Therefore Madoka is not aware that she is destined to become a witch capable of razing the earth. Her doppel also emerges from her heart, which looks similar to the wraith that took on Madoka’s form in Puella Magi Madoka Magica Wraith Arc.

The in-game description states that the doppel “embraces all of its surroundings in arrows of light”. Arrows of light is the translated name of the soundtrack that plays during the final episode: Sagitta Luminis.