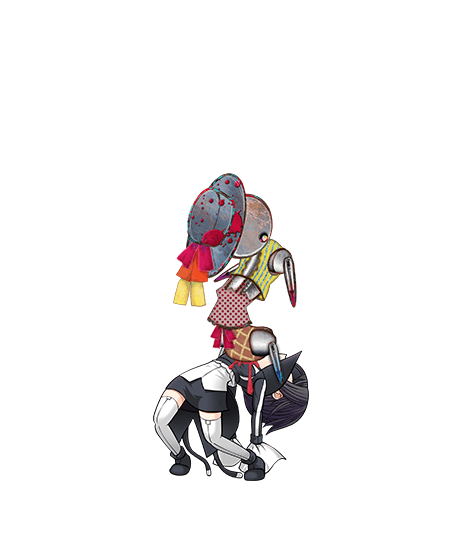 Doppel Detail (May Contain Spoiler)
The master of this emotion has vowed absolute loyalty to her savior. It penetrates enemy and master alike with sharp needles, sewing the fate of all things tight. This act represents its extreme devotion, such that it offers up everything, including its life to its benefactor, while symbolizing the perilousness of its dependence upon the other, which it cannot maintain its identity without. The sharper the needles are, the more the stitches there are, and the harder it becomes to extricate oneself from it. However, this merely serves as an expression of the master's desire.

Latria is a Latin word that means "adoration". The doppel description states that Kirika “swears absolute loyalty to the benefactor who saved her” (i.e. Oriko Mikuni).

In the Eastern Orthodox and Roman Catholic churches, dulia is reserved for services paid to a human lord, whereas latria was services paid to the Lordship of God. This emphasizes Kirika’s veneration and fanatical devotion towards Oriko. The fact that her doppel emerges from her heart serves to reinforce this idea.

Sewing in dreams signify the development of new thought principles or values. Kirika wished to become a new person and so her doppel is composed of needles. The doppel’s description card describes the doppel’s ability to sew Kirika’s fate as representing her “all-sacrificing loyalty to her benefactor” and also symbolizes how she can only maintain herself by depending on others.

Finding sewing needles predicts a strong friendship with a new acquaintance whereas dreams of sewing are associated with repairing or renewing aspects of your life and can also indicate that the dreamer suffers from loneliness. This would tie into Kirika’s feelings that she was given a new life by Oriko after being alone all of her life.

In Kirika’s witch barrier that was shown in Puella Magi Oriko Magica, there is a sign that reads “Margot Garden”. This could be a reference to the artwork “Spring: Margot Standing in a Garden” by Mary Cassatt. In the painting, a young child is shown wearing a dark green hat with a large pink flower. Latria also wears a dark colored hat with a pink ribbon and blood splatters.

Mary Cassatt was known in particular for her depictions of the intimate bond between mothers and their children. Considering Kirika can often act childish and looks up to Oriko, this could also tie back into the relationship they share with one another.