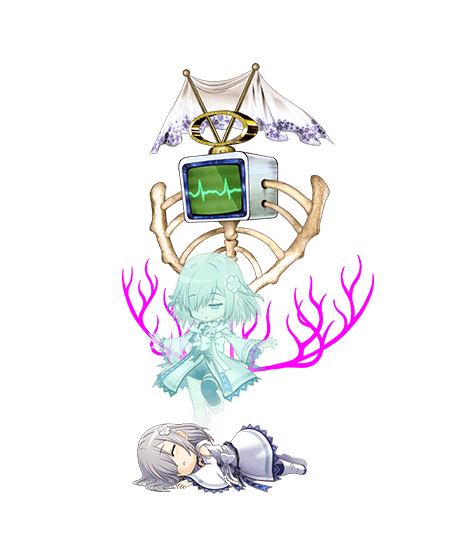 Doppel Detail (May Contain Spoiler)
The master of this emotion uses powerful electrical signals to burn the ill will from its target's body, incinerating its personality along with everything else. Though they are horrified by this Doppel's power, they are also tempted to believe that murder such as this is the only way to put an end to all human ill will. This Doppel also has power over both life and death, and, when it appears, the master's body and soul split apart temporarily, leaving her soul meandering in the space between life and death.

Renata is the feminine version of Renatus, which means "Born Again", primarily in the spiritual sense.

Among other things, an ECG can be used to measure the rate and rhythm of heartbeats. When Ren's doppel is unleashed, the electrocardiogram's monitor shows a flatline until she is shocked back to life and her heart starts up again, reinforcing the literal meaning of her name.

The word electrocardiogram  is derived from the Greek electro, meaning related to electrical activity; kardia, meaning heart; and graph, meaning "to write". Ren's doppel is the doppel of electronic transmission, her heart was revived by Rika, and Ren loves to write in her diary.

The ECG monitor has antennae like a television set and are used to transmit electricity as an attack on an enemy. Television sets could be linked to the movie Poltergeist, where a ghost was using a television set as a portal to the afterlife. It also has the power to burn away evil intent, which reflects Ren's desire to rid the world of evil.

As a magical girl, Ren has both angelic elements and death elements. These reoccurring images of life and death are also reflected in the form of the doppel Renata, as it has power over life and death. Her transformation video shows her with an angel's wings and her five star art also features a halo. Her doppel's form has an upside down ribcage with red veins sprouting from the bottom. Because Ren has angelic themes in her transformation, and the doppel's ribcage points downwards, this could imply that it is a "fallen angel", as the red veins are shaped like wings and sprout from where her wings would be.

When her doppel is unleashed, her ECG initially flat lines, implying her death. Her spirit soars upwards towards heaven, then is 'struck down' by lightening. Her robed costume and scythe both invoke imagery of a shinigami, also known as a Death god. Renata has a shroud at the top, which are commonly used to cover the bodies of the deceased in various cultures.