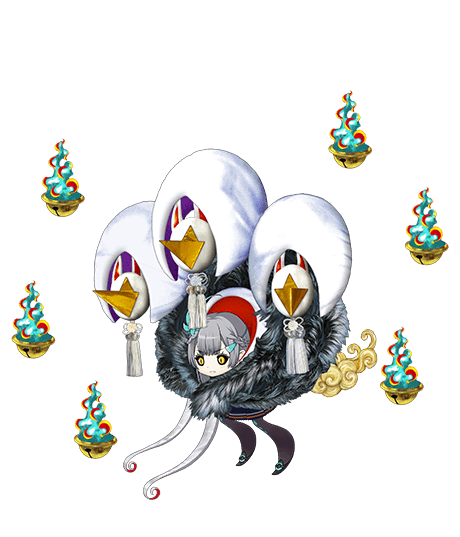 Doppel Detail (May Contain Spoiler)
The master of this emotion uses a variety of magical abilities to enact vengeance on those she bears resentment toward. This Doppel is part of the kitsune-ken Doppel trinity, and represents retribution. As it is proficient in magic, it can bewitch its enemies by controlling will-o’-wisps. Even underwater, the wisps will surely never vanish as long as a grudge exists to fuel them. The Doppel’s master loses her ability to think rationally while it manifests, acting purely on instinct and displaying a fearsome jumping ability.

Tagori is the name of one of the Three Munakata Goddesses whose shrine is located on Okinoshima island. She is one of the three goddesses that was formed when the sun goddess Amaterasu broke Susano's sword, chewed it in her mouth, and then blew out a mist that produced the triad.

Konoha's doppel consists of white fox heads. The foxes of the goddess Inari are pure white, and foxes are often seen as "witch animals".  In ancient times, it was said that foxes often possessed people, usually young women. In some cases, the victim's facial expressions change to resemble that of a fox's and the victims will often act like a fox, jumping and yelping. Konoha's eyes turn yellow and sharp, much like a fox's, and she gains the ability to leap about proficiently. The victim's also tend to act on the will of the fox that possess them, which explains Konoha's inability to think rationally when she summons her doppel.

Foxes are magical creatures that can conjure will-o'-wisps, which are magic flames that can't be put out by water. They also have several other magical abilities such as shape-shifting and can often be mischievous, or even malicious. Tagori uses a variety of magical abilities to enact revenge on those she resents.

The doppel is surrounded by fox lights. In the past, weddings were often held in which a bride entered with a procession of paper lanterns. According to folklore, foxes often held their weddings during rainy days full of sunshine and would also use paper lanterns when holding their own wedding processions.

Atmospheric ghost lights often appeared during these kind of days and would disappear once people got closer. It was said that the mysterious lights were flames conjured by foxes to trick people since the lights looked just like paper lanterns being held in the air. When Konoha's doppel is summoned, the atmosphere becomes rainy and her doppel uses will-o'-wisps to attack from the dark.