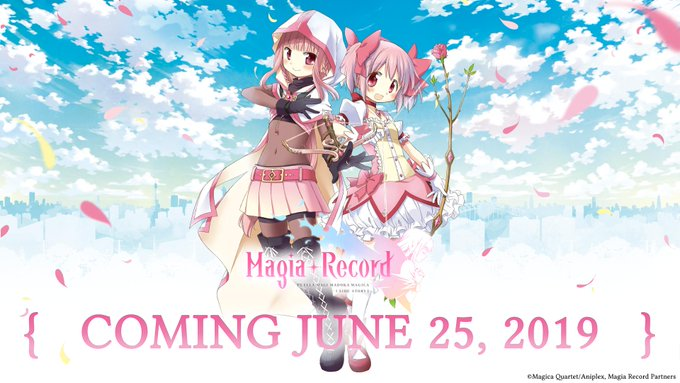 After much anticipation, the English version of Puella Magi Madoka Magica Side Story: Magia Record has been officially confirmed for June 25, 2019!

Unravel the mysteries of Kamihama City with Magia Record: Puella Magi Madoka Magica Side Story, launching on June 25th in the U.S. and Canada on iOS and Android! #MagiRecoEN pic.twitter.com/nJQsuH1qYH

A pre-registration campaign is now ongoing, featuring a free copy of Homura Akemi (Glasses) aka MoeMura: 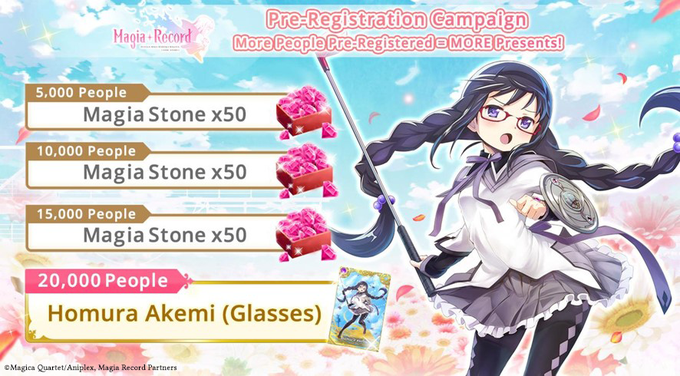 How to Pre-register for Magia Record NA

You can pre-register on either iOS or Android devices with the links below.

The more people pre-register, the more bonuses everyone get!

Note: Pre-registration is currently region-limited to only Canada and USA.

If you're outside of Canada and USA, you can still pre-register with the following method: 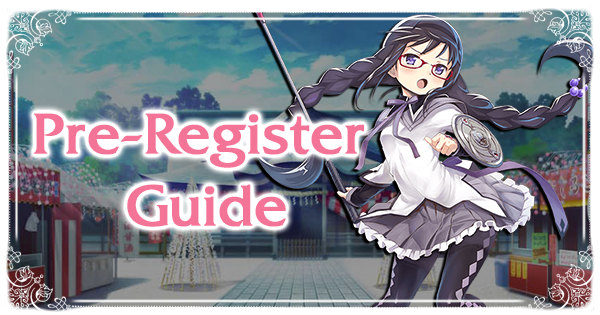 From aokiume, Gekidan Inucurry (Doroinu), SHAFT, and more comes a brand new adventure in the world of Madoka Magica!

Aniplex of America invites you to unravel the mysteries of Kamihama City with the mobile game, Magia Record: Puella Magi Madoka Magica Side Story, launching on June 25th in the U.S. and Canada on iOS and Android. Featuring a brand-new Magical Girl story, the imaginative mobile game developed by f4samurai (Ange Vierge Girls Battle, Hortensia Saga) brings together the creative team behind the iconic Puella Magi Madoka Magica franchise, including Gekidan Inucurry (Doroinu), original character designer aokiume, and studio SHAFT (MONOGATARI Series, March comes in like a lion), who contributed the opening animation as well as the transformation animations in the game.

Players will have a chance to embark on a fantastical adventure in the world of Madoka Magica by building a team of Magical Girls and fighting their way through three different types of stories with over thirty unique Magical Girls. From following Iroha as she hunts for her sister Ui or travelling with Madoka and her friends through another timeline, to learning more about each Magical Girl by battling through their own unique story, players can look forward to a one of a kind journey beginning June 25th.

In anticipation of the game’s release, the free-to-play mobile game has launched a pre-registration campaign where each milestone of people registered will yield a gift of Magia Stones (an in-game currency that can be exchanged for items), leading up to the highly sought after Magical Girl, Homura Akemi (Glasses), at over 20,000 registrations. To pre-register, fans can search for the game on the Google Play or Apple App Store and hit the pre-register button, found where the download button usually is. By pre-registering, Android users will receive a notification on the game’s launch date to download the game, while iOS users will receive a notification and the app will be automatically downloaded on to their device.

“We are extremely happy to have this wonderful opportunity,” says Masaki Sato, Magia Record producer from f4samurai. “We were absolutely thrilled to see with the positive response we received from fans we met at Sakura-Con in April when we announced Magia Record’s English release and to see how much they loved the Madoka Magica series. As we prepare for the game’s launch, we really hope fans in the United States and Canada will enjoy this new Magical Girl adventure.”

Based on the beloved anime series that revolutionized the magical girl genre, the mobile game immerses fans into a fascinating world inhabited by an eclectic group of characters brought to life by a stellar cast of voice actresses. Since announcing the English version of the game in April, the mobile game has released videos introducing fans to Magical Girls Iroha Tamaki (voiced by Momo Asakura), Yachiyo Nanami (voiced by Sora Amamiya), Felicia Mitsuki (voiced by Ayane Sakura), and most recently Tsuruno Yui (voiced by Shiina Natsukawa).