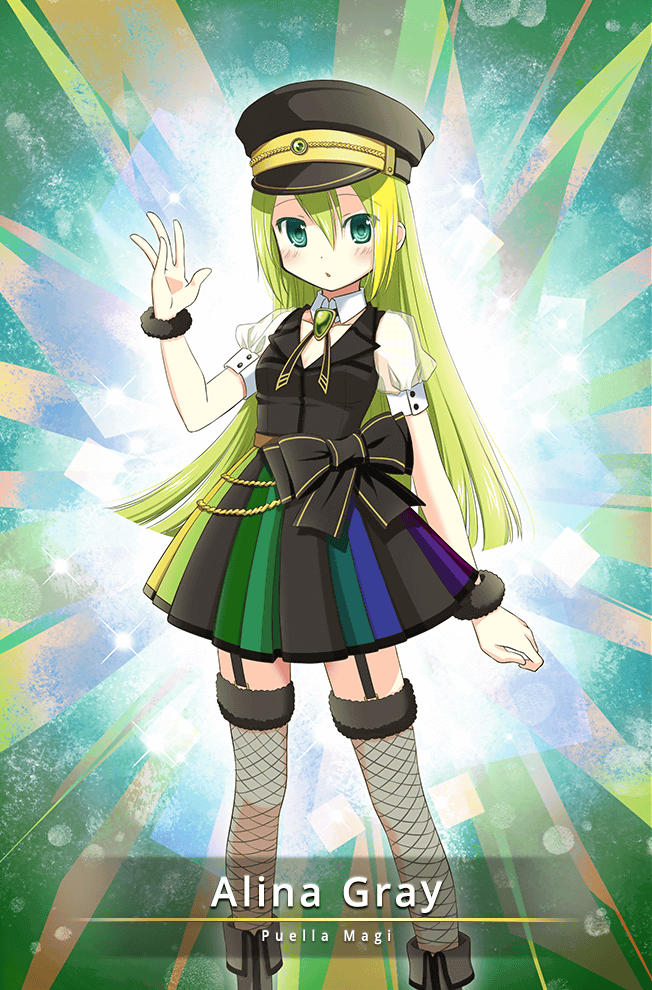 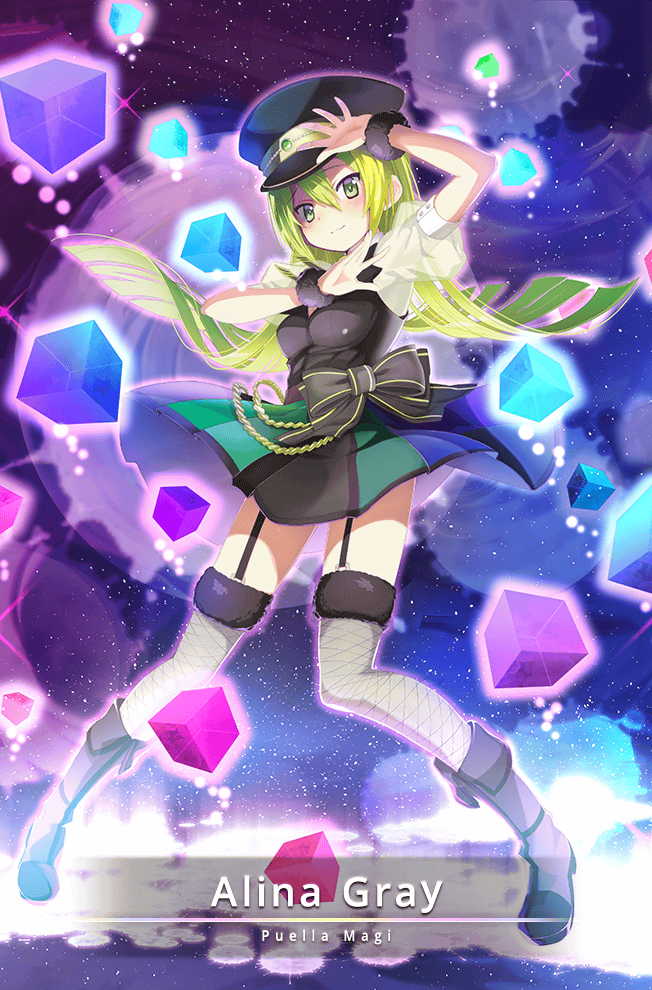 A Magical Girl who is trying to create a world where no one has to become a Witch, Alina is an artistic genius obsessed with life and death who pours herself into her work, dreaming of making masterpieces featuring Witches themselves. She's used herself as a subject for her art when in a creative slump. 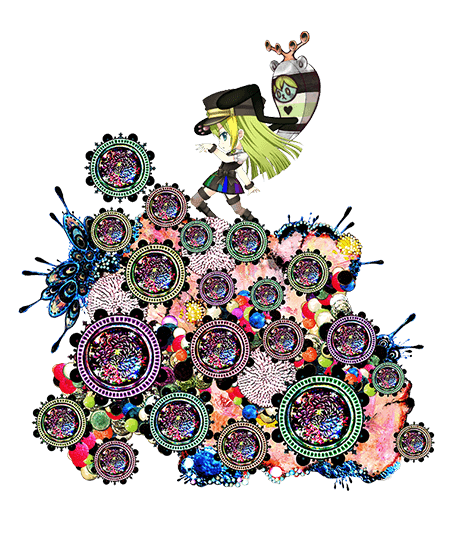 Damage ALL Enemies
Doppel: Deals 902% damage to all enemies.
Poison ALL
Apply Poison to all enemies (3 turns). Poisoned enemies takes 5% damage per turn.
Attack UP
Buffs Attack by 55% (2 turns).
Critical Chance
Guranteed Critical Hits (2 turns). Critical Hits deal 2x damage.
Draft & Supervision: Idea/Supervision: Gekidan InuCurry (Doroinu)
Doppel Detail (May Contain Spoiler)
The master of this Doppel is entranced by the beauty of her own Doppel, but has yet to realize that it is still hiding its true form. It attacks from where it sprouts out of her back, using a large projection of itself made from the hardened paint (Pathogen Tempera) it emits. It boasts a Witch-like figure as it does this, despite its Doppel nature — this is because its human body becomes so coated in paint that she's no longer visible. The master cannot verify the appearance of her Doppel, but apparently it is "just as beautiful when you view it from the inside". 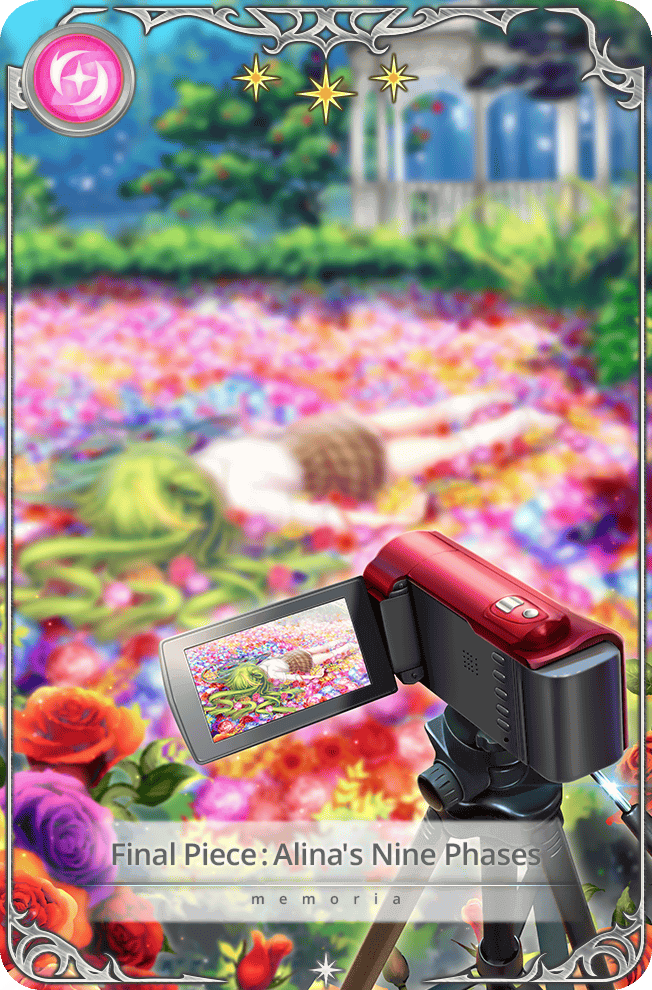 Alina's connect not only increases attack, but she also grants you the ability to inflict Bewitch and Poison guaranteed. At 5 stars she also gives you the chance to inflict Stun on the enemy as well. With so many status affects, your enemies will take heavy damage and possibly not even be able to attack on their next turn, giving you a strong advantage.

As an attack type, Alina sports attack stats in the upper range. Equip her with memoria that increases her attack stats or damage output and Alina will deal some serious damage to whatever she attacks.

Since Alina is an attack type with low defense she won't last terribly long. And since her connect is purely offensive, she isn't very good as a team player. Alina works best when she focuses on attacking the enemy and let others do the supporting. Girls like Holy Mami who specialize in increased damage against enemies with status ailments would be the ideal partner for Alina, taking advantage of her connect.

Alina's connect is perfect for Mirrors, increasing your attack and inflicting bewitch so the opposing team will miss most of their attacks. Poison will add to the damage the enemy takes, however her connect does have a small chance to stun the enemy as well so plan well who you're attacking. If an enemy is stunned, this makes it easier for the other members of the opposing team to pull off a puella combo.

Her forest element will help give her an advantage over the triple-blast water types out there.

Alina has low defense due to her Attack type, so be sure to take this into consideration. 4 slots is preferred so that the active memoria can help boost her defense. Alternatively, a defense tank that can take the hits for Alina so she can do what she does best also helps.

Going Out in a Kimono

Getting Lost is a Daily Insurance

"Haregi" will increase her damage while also granting her the chance to inflict bewitch on enemies.

Active memoria that increase the damage on status-inflicted enemies is also highly recommended. 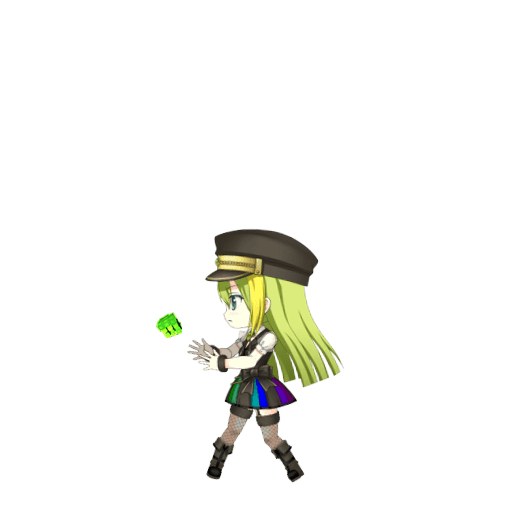 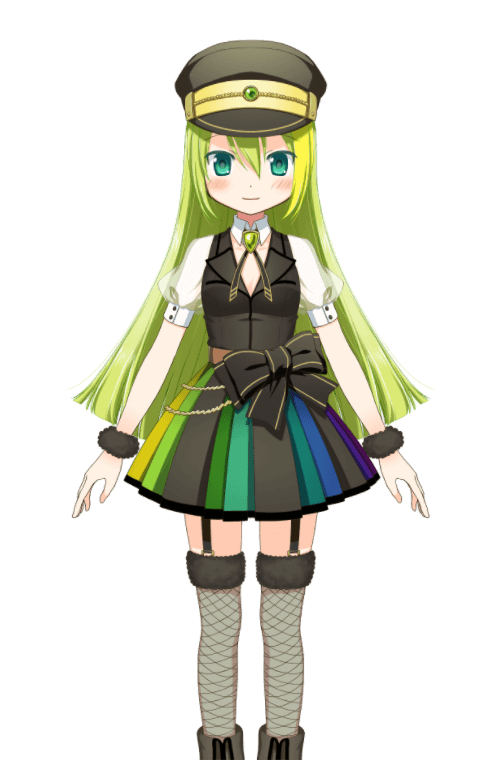 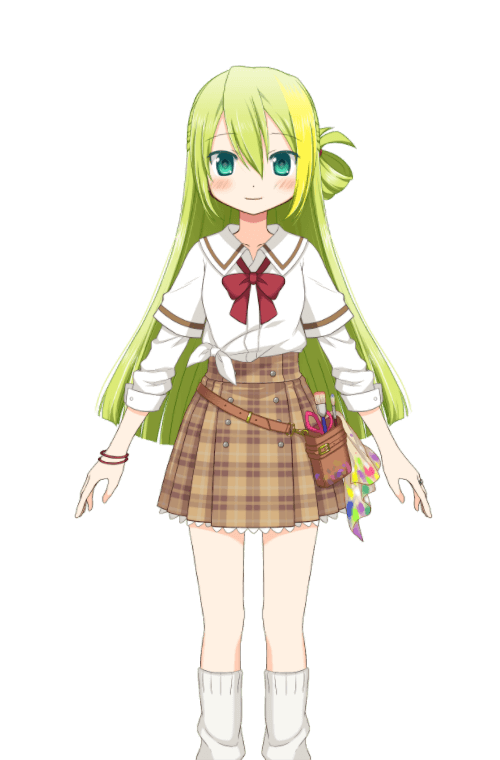 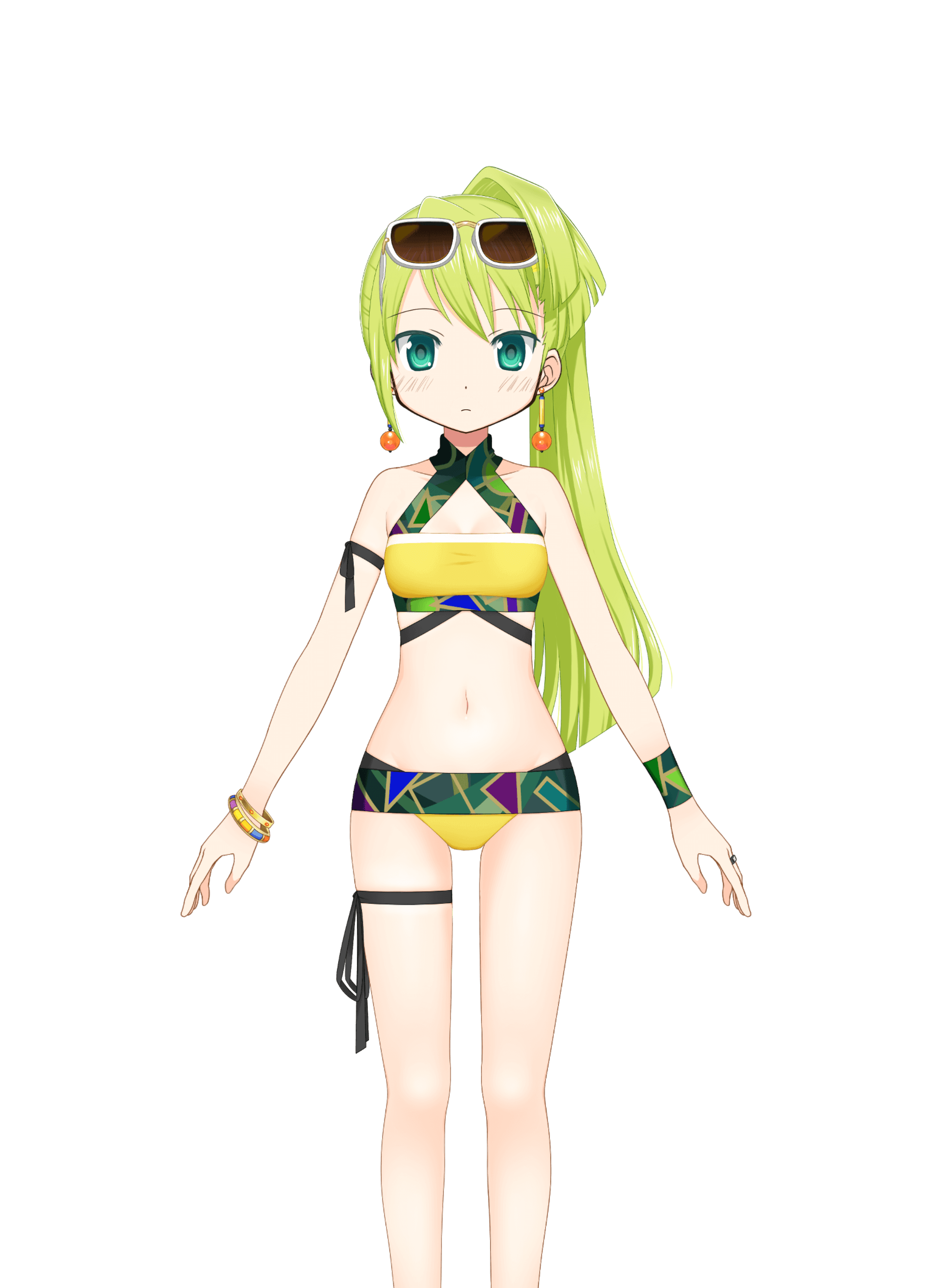 A genius artist obsessed with the transition between life and death. Currently she's fascinated with the magical girl cycle and she dreams of making witches the ultimate art.

One day at school, Alina was presented with the award for best Modern Art for her artwork. However, the students at school kept talking about her behind her back, how she had destroyed her canvas and just about everything else in the prep room because she couldn't think of what to create. A junior classman named Karin Misono snapped her picture and Alina ended up painting her self portrait, then covering it in sand. As Alina and Karin talk about what the other students are saying about her, she gets called into one of the teacher's room because one of the judges wanted to meet her. But Alina ran off before they could do so.

Karin found Alina hanging out in a restaurant. She hands her the note that the judge had left her. Alina reads the note, but doesn't understand what the judge means by her lack of external theme and how she'd run out of brilliance by 15. Alina figures the letter was asking about the message she was trying to convey with a piece of her art. She thinks this is the first person who asked about her values, and not her work, but even Alina doesn't know why she creates art. She decides to visit the local museum and look at her past works.

Growing up, Alina's parents had owned an art gallery. When she was 8 years old, her dog and grandparents died and Alina had become fascinated by the transformation from living to dead. At 11, she created her first piece of art by using time-lapse and posing skeletons. Alina created several works since then, including a picture drawn at age 14 using charcoal that came from carbonized corpses.

While hard at work on her newest painting, Alina becomes frustrated and tears her canvas apart because she believes her work has become trash. She says she has nothing, and decides to leave for a month to travel the world and gain inspiration. But even after she came back, Alina feels like she hasn't changed at all. While hanging out with Karin and critiquing the new manga character she drew, Karin tells her the reason she draws is because she wants to make the reader happy, like how she enjoys reading her own favorite mangas. Alina thinks Karin might be more of a genius than her and leaves.

While near a riverbank, Alina decides she is nearing her death as an artist. Believing herself empty, she says that her realization of this has caused her past works to lose their luster. Alina decides to break all of her old art...including herself. She says that her last artwork will be to go out in a blaze of glory, and when her brilliance fades her body will rot away. Kyubey appears and offers her a contract. After debating with Kyubey for a bit, Alina leaves to create her last artwork.

The next day Alina heads to the museum and starts destroying her old art pieces with a hammer and saw until security gets called and Alina runs off. She then hums happily and heads to the top of a building. She had decided that her final work would be to destroy all of her past art, including herself. Alina prepares to jump off the building and land in a field of flowers where she had setup a video camera to record her final moments. Kyubey appears once more and asks if she won't reconsider becoming a magical girl, but Alina believes if she solved her problems with a wish, then she wouldn't be herself anymore. As she tells Kyubey to go away, she realizes that wouldn't be such a bad idea. Her parents would often get mad at her for spending all her time painting, so she wishes for an area where nobody can disturb her. Before Kyubey can explain about magical girls, Alina tells him to shut up and jumps off the roof.

As Alina drifts in a haze, she realized that her theme was always her own beauty. Alina thinks the worst possible ending would be for her final work to be a failure, but knowing what her theme is is pointless if she's going to die for it. She wakes up in the hospital where Karin had been waiting. Karin cries, happy to see her alive. Alina tells her she won't make herself art anymore, but even now that she knows what her theme is, she still doesn't feel fully alive. Karin hands her the manga she brought for her and leaves. Alina tries to read the manga, but can't understand it. Touka Satomi and Nemu Hiiragi appear. It seems they were the two who had found Alina. After asking Alina to tell them thank you, they show her a newspaper article where they praised her rampant destruction at the museum as another art piece. Alina thinks this is better than being charged for damages and breach of contract. The two girls demand her thanks once more and want to talk with her more later. Alina shoos them out of her room.

Kyubey appears and explains Alina survived because her body was remade to enable her to fight witches. Alina is grateful she survived, even if it means her final artwork failed. She had finally found her theme and got the place she wished for. Alina then senses a witch and transforms into a Magical Girl. As she fights her first familiar, Alina begins to laugh the entire time. Kyubey finds this unusual, as Alina explains she's happy this world is overflowing with lifeforms of such a unique design. She says it gives her the shivers, and she can't wait to show everyone her beauty.

Read more of Alina's story on the Puella Magi Wiki.