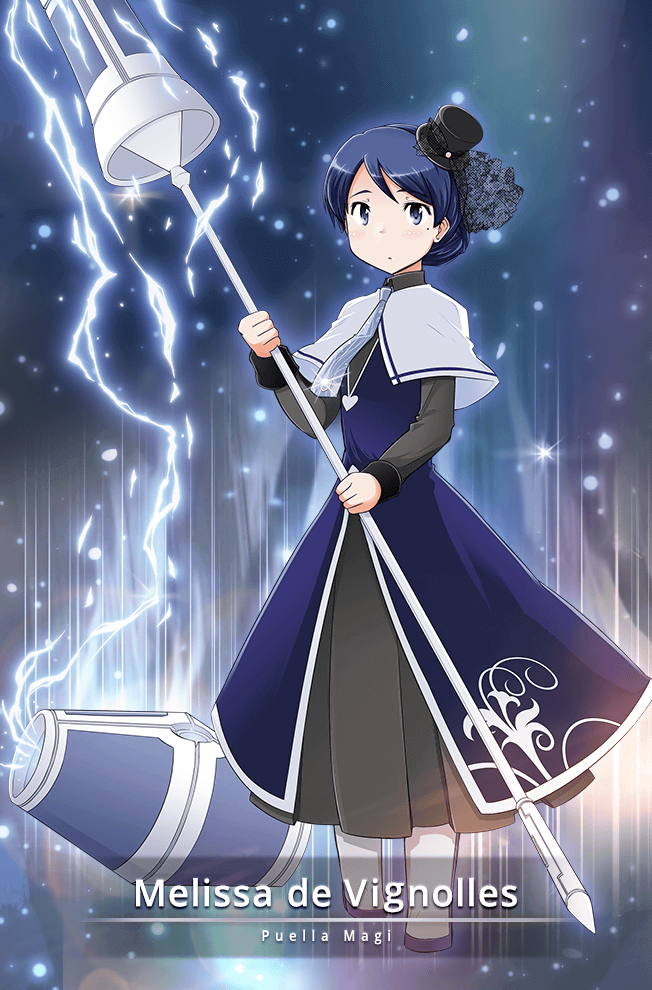 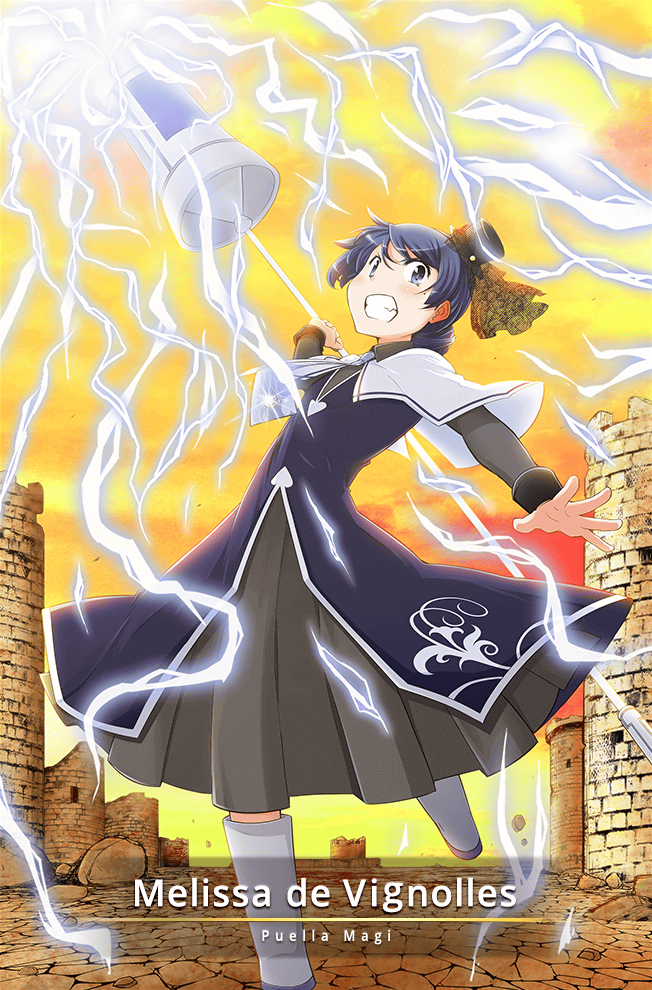 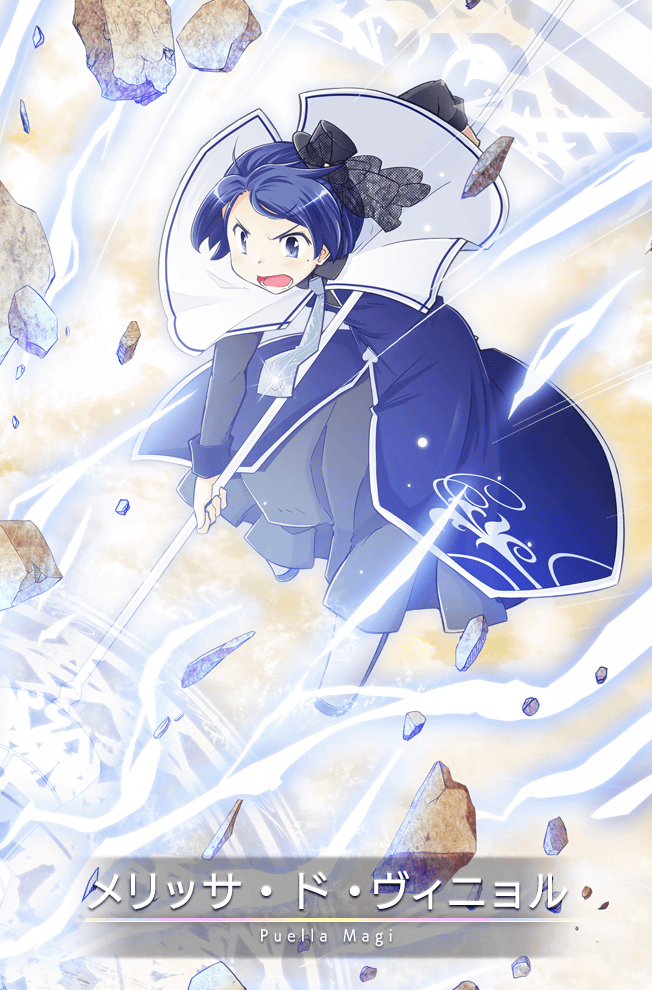 5* Melissa is currently not available in NA.

A Magical Girl of medieval France who serves in the war and attends to all of Darc's needs. She is the daughter of Captain "La Hire", who is a comrade-in-arms of Jeanne d'Arc. Though normally a kind and well-mannered girl, her fury cannot be stopped when she becomes angered. 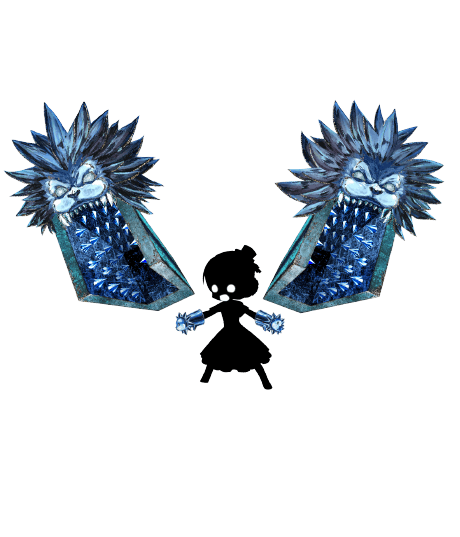 Click here to reveal
Feature: Fury
Damage ALL Enemies
Deals 814% (+22% per Magia Level) damage to all enemies.
Accele UP ALL
Buffs all allies Accele MP Gain by 27.5% (+2.5% per Magia Level). (3 turns)
Draft & Supervision: Idea/Supervision: Gekidan InuCurry (Doroinu)
Doppel Detail (May Contain Spoiler)
The master of this emotion has a gentle disposition, and makes a good impression on everyone around her. When a force or action acts on another entity, it’s pushed back by an equal and opposite “reaction”. This Doppel is the very definition of an inverse reaction to its master’s personality, with its fundamental nature symbolizing fury. It will beat down anything that opposes it until said opposition has disintegrated, and the more torment its master’s peace-desiring heart endures, the more fiercely its power surges forth. It’s completely vulnerable to continuous attack, but that’s no reason to take it lightly. 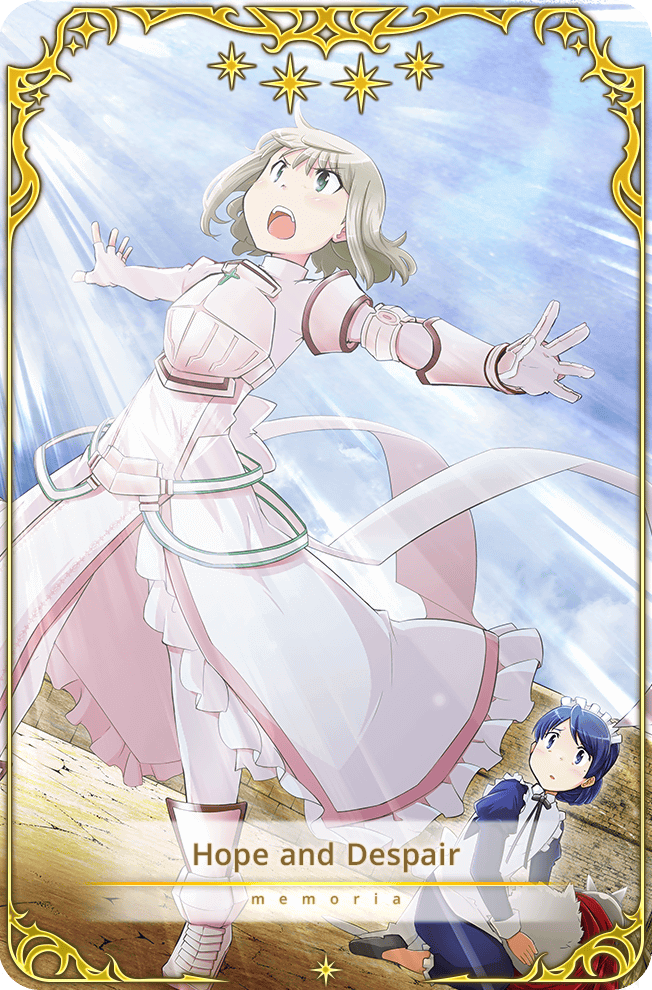 Melissa is a Magia type magical girl with two Accele discs, which means she can quickly build up MP, and aid in Magia focused teams. Her connect provides increase Accele MP Gain to an ally, and her Magia applies this same effect lasting for three turns to the entire team. On teams which aim to constantly fire off Magias, Melissa can use her abilities to their fullest.

Currently a connect effect only available to Melissa in NA, she can remove debuffs from an ally. While this effect is not universally useful, it is a trait that makes Melissa stand out in her own right as she can offer unique support when a quest calls for it.

Melissa’s low Defense and HP can make it difficult for her to survive in long fights. Allies who can heal, reduce the damage she takes, or both in the case of Madoka Kaname, will help alleviate Melissa’s flaws.

With a disc set of AABBC, Melissa can fit on most teams without interfering with Blast or Accele combos. Her Attack is decently high for a ★★★★ capped girl, so picking her discs when necessary is not awful, but not ideal either.

Melissa’s support oriented abilities cannot be put to full use in Mirrors due to the faster pace of battles. As a result, she is generally outclassed by stronger Aqua girls.

Melissa’s personal memoria has the unique trait of being the only ★★★★ personal memoria in the game. It provides passive MP Gain and a significant boost to Magia Damage. Both of these effects cater to Melissa’s abilities, so coupling this memoria with similar effects is recommended. 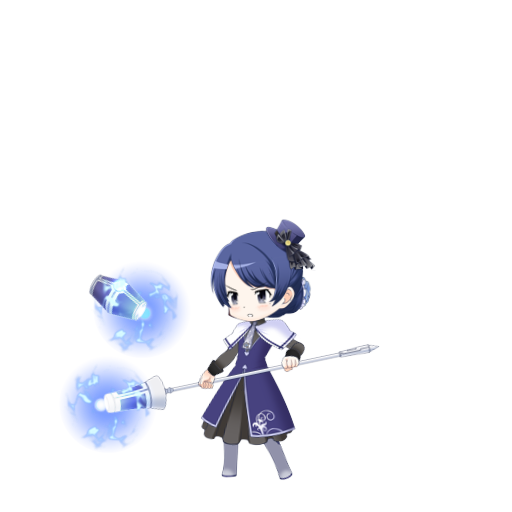 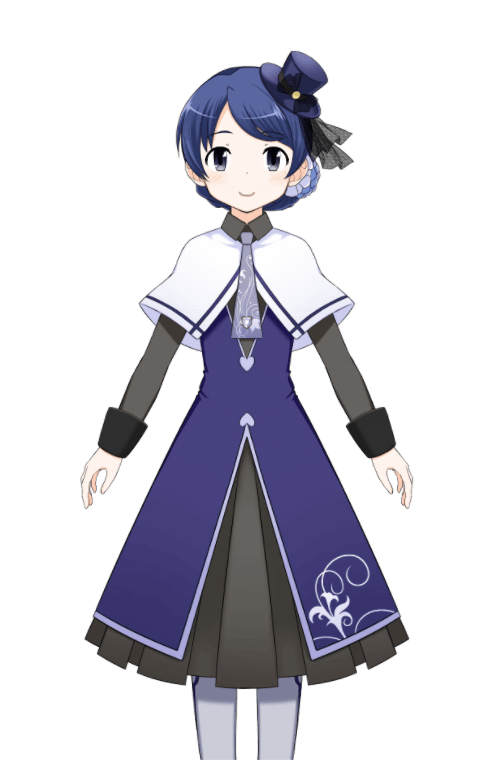 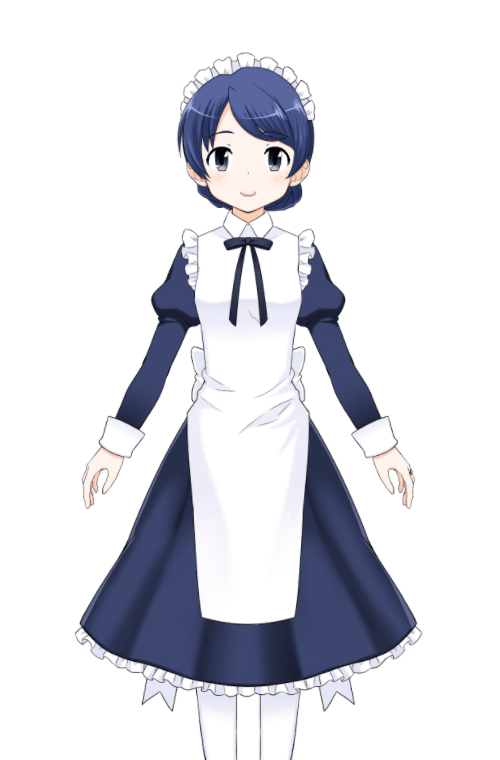 Melissa is the daughter of Captain Etienne "La Hire". She was raised at a church after her mother passed away from plague at an early age. Her father found her and has taken care of her ever since.

As Iroha Tamaki and Yachiyo Nanami travel with Darc and the others, they take a short break to rest. Melissa asks Iroha and Yachiyo to escort her and some of the other adults to the fortress where they'll be able to replenish supplies. The two agree and they have an uneventful journey to the fortress, with Iroha and Yachiyo describing some of the various foods they have in Kamihama, including French desserts such as mont blanc. Melissa asks them to describe the cake in great detail so she can try to replicate it for the soldiers.

Iroha and Melissa are able to make it to the village safely, although it is dark by the time they arrive due to a washed out bridge adding several hours to their journey. At first, Melissa had wanted to search for lodgings for the night and see the church in the morning, but a local villager informed her they were currently under English rule and that the church had been haunted by the ghost of a saint. Melissa won't back down from this test of her faith and decides to push for the church that same night. A young village girl offers to show her the route to the church.

At the church,  Melissa finishes her prayers when they suddenly hear the church bell ringing despite only the three of them being inside. Howls and footsteps begin to resound from every corner and the girls begin to believe there might actually be a ghost. Melissa then wonders why a saint would attack a pilgrim when she stands up and demands an end to the prank. The young girl admits defeat and the villagers appear from their hiding spots.

They had been trying to drive the girls away due to not wanting to attract the anger of the English if they were to offer hospitality to Darc and her friends who were French. Melissa forgives them, prompting the villagers to believe she may be Darc herself and insisting she spend the night. The next day Iroha and Melissa return to the fortress safe and sound.

That night Melissa serves the soldiers their supper along with mont blanc for dessert. She explains she was able to find the chestnuts she needed for the recipe at the village and had negotiated with the villagers to bring some back with her. The cake is a huge success and the troops' morale has never been higher.

Read more of Melissa's story on the Puella Magi Wiki.