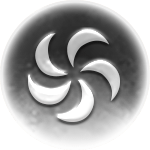 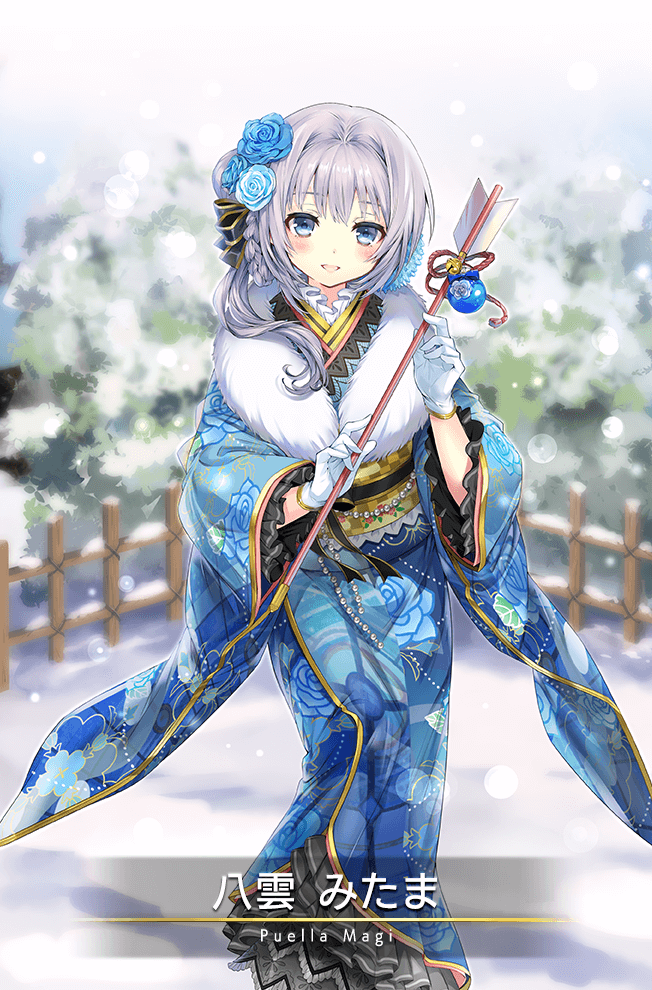 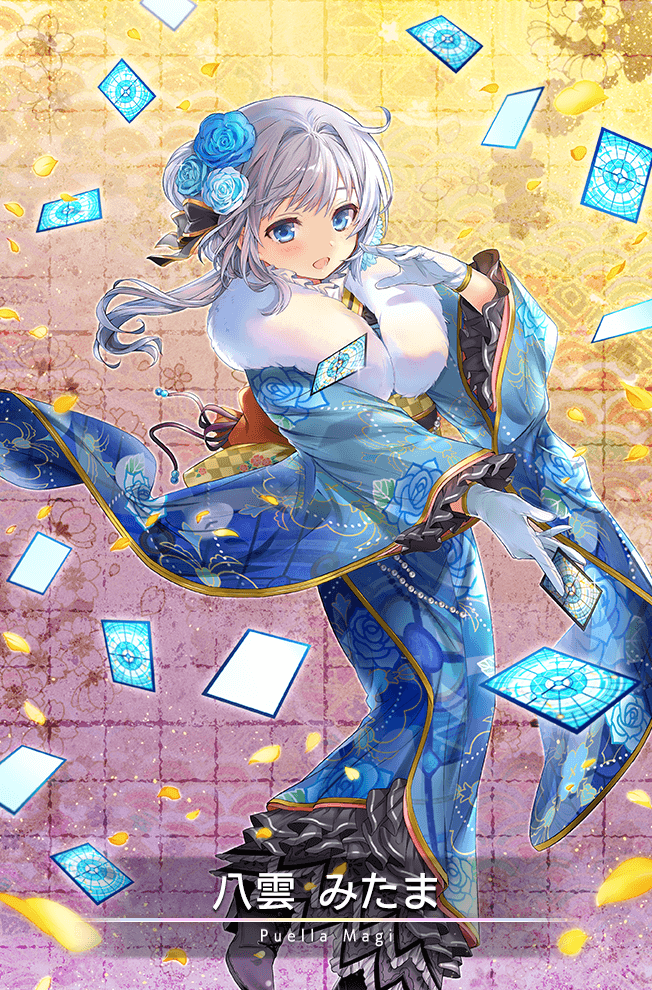 A Magical Girl who works hard and plays hard from the first day of the year. She is very fond of the kimono that she got from Yachiyo, so she infused it with magic in order to wear it during battle. With her cards as her weapon, she attacks those who fail to play her game correctly. 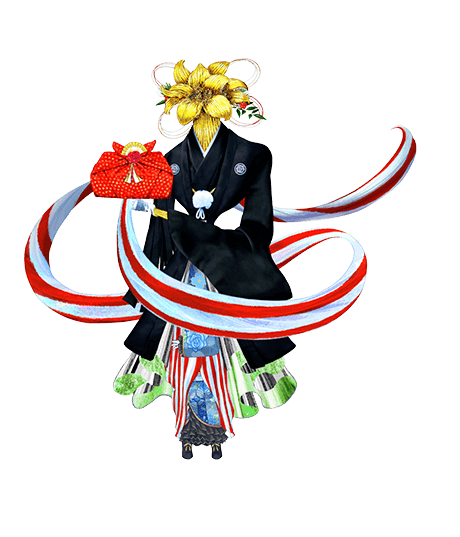 Damage ALL Enemies
Doppel: Deals 902% damage to all enemies.
Curse ALL
Apply Curse to all enemies (1 turns). Cursed enemies takes 15% damage per turn and take increased damage from element they're weak against; cannot recovery HP.
Poison ALL
Apply Poison to all enemies (3 turns). Poisoned enemies takes 5% damage per turn.
Magia Seal ALL
Apply Magia Seal to all enemies (3 turns).
Draft & Supervision: Idea/Supervision: Gekidan InuCurry (Doroinu)
Doppel Detail (May Contain Spoiler)
The master of this emotion is happy to welcome the new year with newly made friends, despite resenting her situation. That happiness takes the form of golden lilies, as well as red and white striped cloth. She shares her joy by scattering flowers about everyone nearby before wrapping them in the cloth to ring in the new year. Then again, no one is allowed to go home when it's time to serve the New Year's feast, so they languish in agony as they endure an eternal end to the year. 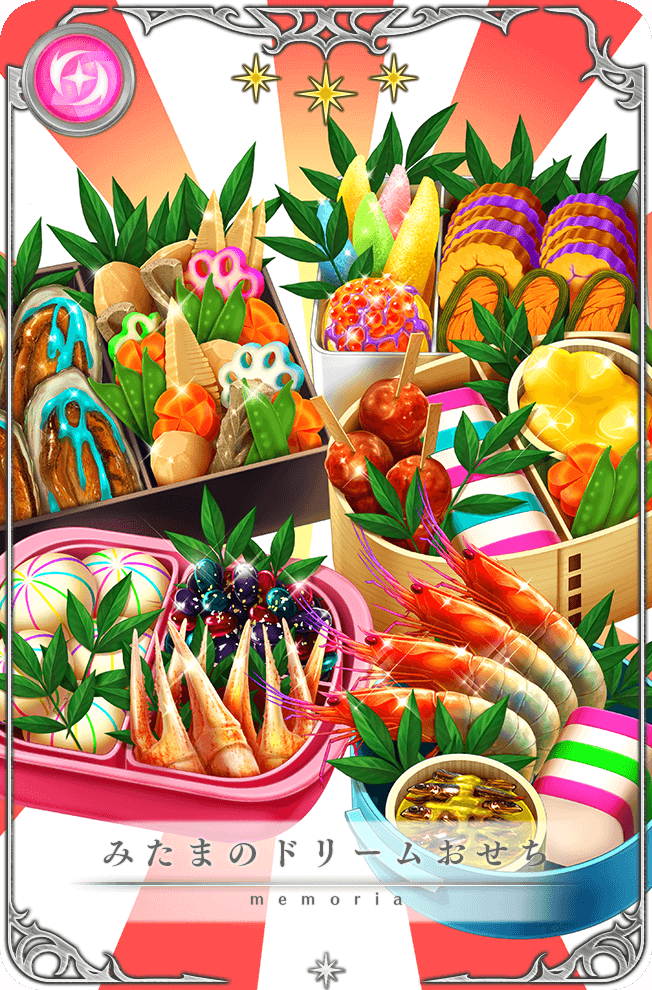 Due to her void element, Mitama (Kimono) has no disadvantages to any element. She will deal neutral damage to any and all elements. However, this means she has no elemental advantage either so the damage she deals will always be neutral as well.

Mitama (Kimono) has great stats, comparable to that of Ultimate Madoka or Sakurako's. She has two accele and two blasts discs, so she's great for magia teams or blast teams.

Unlike regular Mitama, this variant of Mitama won't lower your defense and her magia will actually deal damage to the enemy. Her magia also won't curse herself and instead inflicts guaranteed magia seal on the enemy, perfect for taking down enemy magical girls.

Since Mitama (Kimono) is a balance type, her MP building isn't the best which is a shame because she has a rather good magia attack. It's probably best to put some MP gaining memoria on her to compensate for this if you plan to use her on a magia team.

Her void element means she has no disadvantages to other elements and deals neutral damage to all. Her stats are rather high, meaning she is capable to dealing serious damage on her own without necessarily relying on a connect to boost her offensive capabilities.

However, her balance type and void element mean she has no strengths or particular advantages either. She deals neutral damage and takes neutral damage from all elements. Her connect increases Attack and heals, so it's not the worst but not incredible either.

"Food Stall Paradise" will boost the capabilities of all three discs: Accele, Blast, and Charged damage.

"Midsummer beach" and "Drama" will both increase the amount of MP she'll gain.

Her personal memoria is one of the only three memoria that has Accele draw. 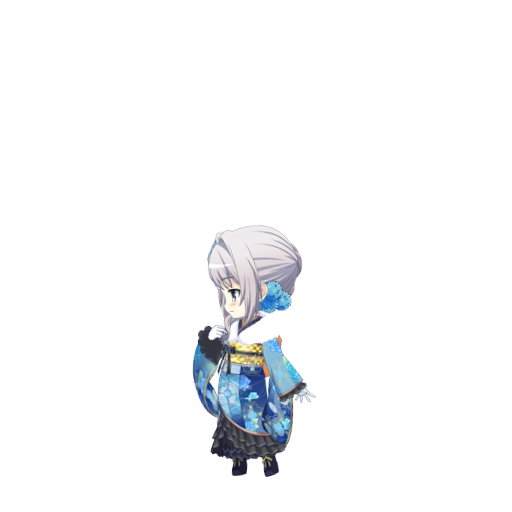 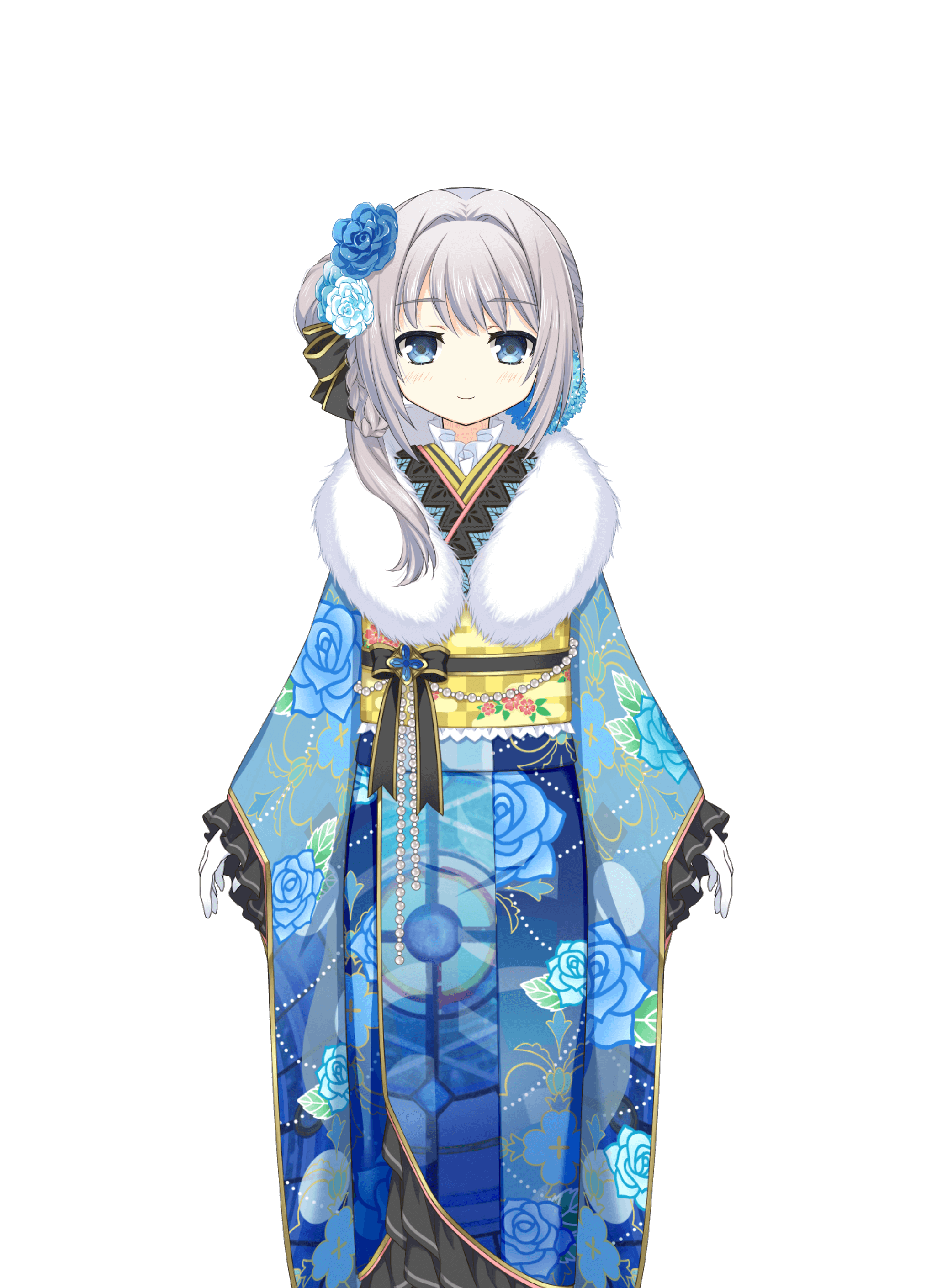 Mitama has no plans other than enjoying the New Year with her family. She wants to try something new and aims to clean up her shop first, but she is bogged down by work.

Eventually, she is helped out by Asuka Tatsuki, Sasara Minagi, Hinano Miyako, and Emiri Kisaki and the shop is cleaned up perfectly, the floor even sparkling clean. She got the idea of holding a party from Momoko Togame, Kaede Akino, and Rena Minami who also plan to do something for Mitama as thanks.

That night, Kanagi Izumi visits, and Mitama asks her about New Year events and decorations. She eventually decides to decorate her store, but Kanagi warns her about the price, and advises her to do DIY decorations instead. Mitama accepts Kanagi's suggestions.

The next day, Kanagi and Konomi Haruna visited Mitama with some already made decorations. Some are extra from Kanagi's maid cafe, and Konomi is experienced with making such decorations since the flower shop she worked at is having a seasonal menu since Christmas was a success. The three of them made many beautiful decorations and set it up at the store.

The next day, Mitama realizes she has no plans for holding a party and no one is visiting that day. Just as she is feeling lost, Mikazuki manor team visits, bringing with them a beautiful kimono and new year food. They say it is their way to thank Mitama for her help.

With Yachiyo's help, Mitama is able to put on the kimono (the gatcha ver.) and is touched by their actions. Momoko trio, Asuka and Sasara visited as well, and it is revealed that the kimono was chosen by everyone for Mitama.

They have a great time, and Mitama is greatly touched by their actions. Although she feels a little lonely when everyone returns home, she is filled with warmth and happiness, and think this will be a great year for everyone.