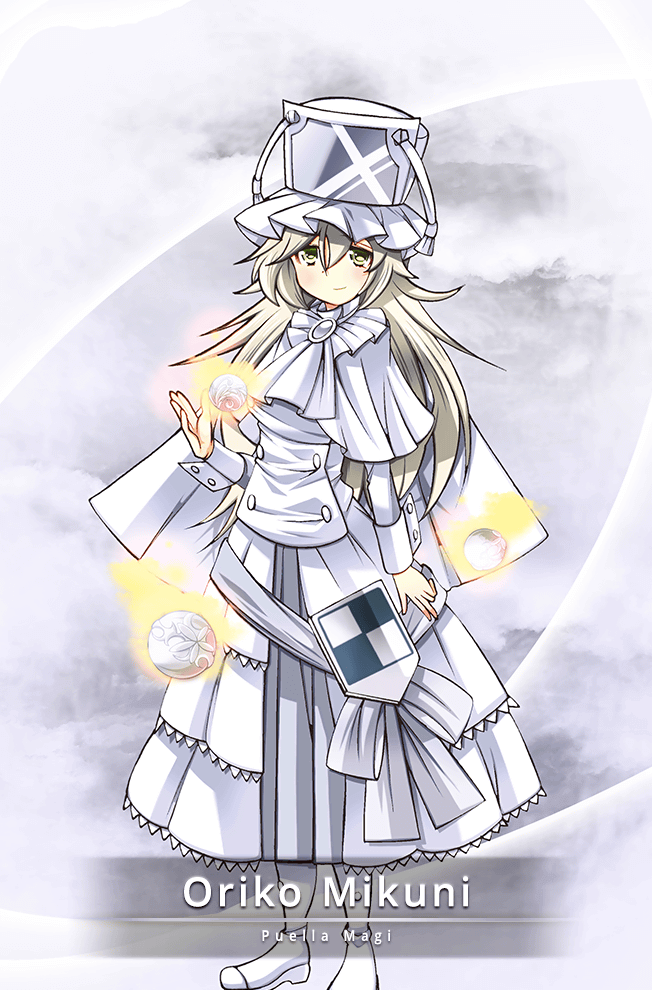 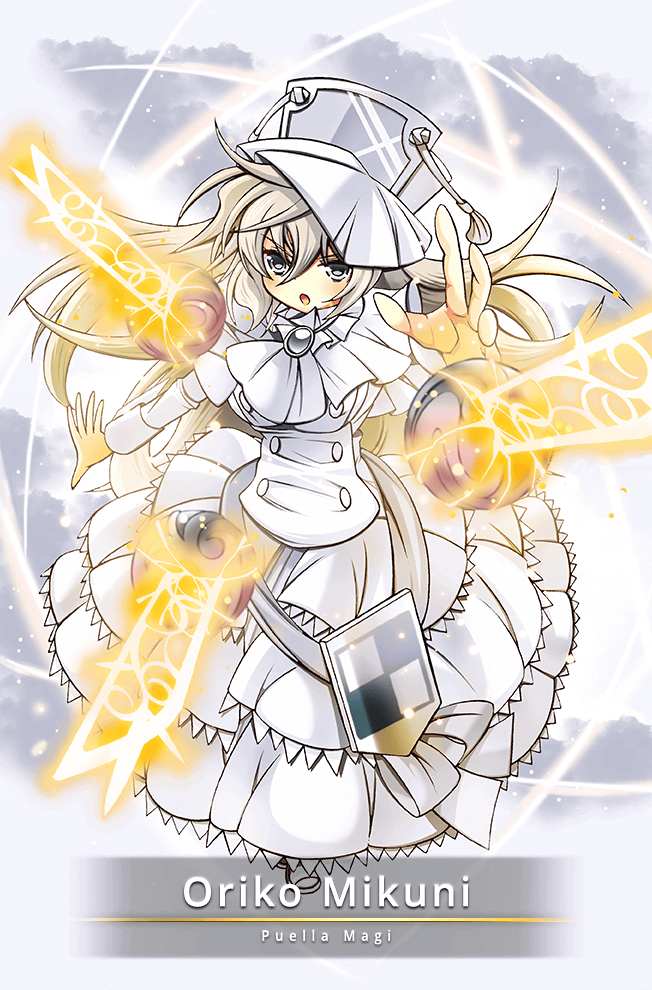 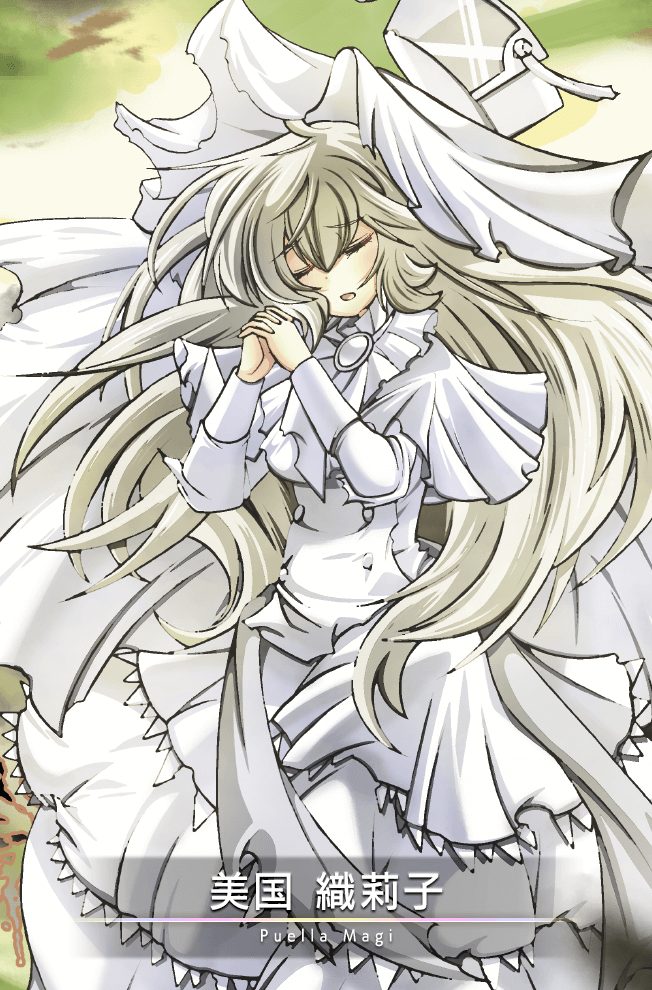 A blue-blooded Magical Girl whose father is an ex-parliament member. Oriko does whatever it takes to get the job done, but her strong sense of justice, inherited from her father, keeps her from overdoing it. She is refined and loves drinking tea at home. 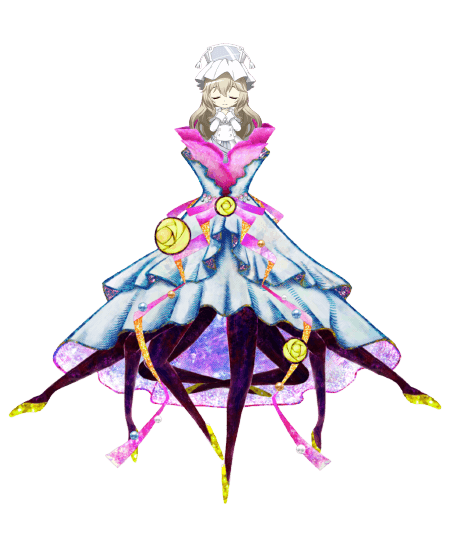 Damage ALL Enemies
Doppel: Deals 946% damage to all enemies.
MP Restore
Restore 39% MP.
Evade
Evade next attack (1 turns).
Draft & Supervision: Idea/Supervision: Kuroe Mura
Doppel Detail (May Contain Spoiler)
The master of this emotion has made it her mission to change the future that she foresaw. Wind blows, flowers scatter away, and their petals wander astray into another world. As heavy mist envelops all of one’s surroundings, the time comes at last. The mist blends together with the wafting petals, the curtain rises on the banquet, and this Doppel begins its dance. When the steps of its dance have reached their highest peak, all enemies vanish like a flower in a storm, and a sacrifice is offered on the ballroom floor. 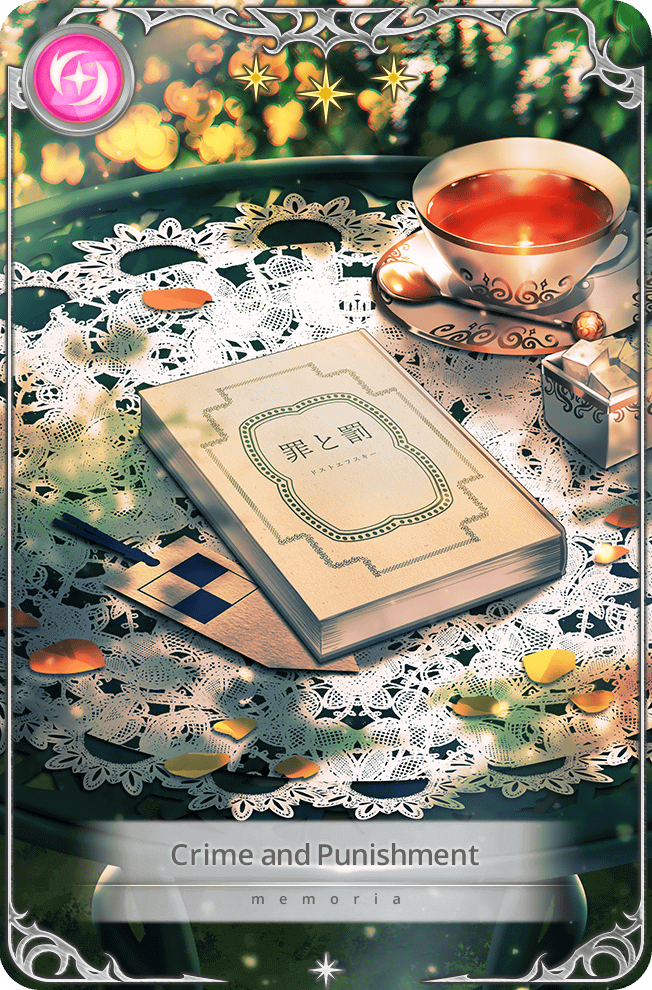 Oriko's connect increases the amount of MP gained from Accele discs and her magia restores her own MP which makes her well suited for any magia-based teams. At 5 stars, Oriko's connect also gives Critical hit chance which makes her more useful overall. Her magia also gains the ability to grant Oriko guaranteed evasion for a turn, making up for her low defense.  Her personal memoria draws her own discs, guaranteeing a Puella combo and a connect on the next turn.

Oriko's high attack stats are negated by her low HP and defense, making her every bit the glass cannon. Since she hasn't been uncapped in the NA yet, her connect and magia aren't as great as they could be. She also has only a single Blast disc, so she won't be able to clear the field of enemies that easily unless it's her magia attack.

Oriko has high attack stats which are always an asset in Mirrors. She'll also be able to spam magia attacks provided you equip her with 4 memoria slots and lots of MP gaining memoria.

However, once Oriko is uncapped to 5 stars, it's possible to run a single Oriko in mirrors thanks to her magia restoring her own MP and guaranteeing evasion (much like Tsuruno Yui).

Her stats are fairly average as far as common girls who have/will be uncapped goes. She has only a single Blast disc and magia damage is slightly nerfed in Mirrors. Her light attribute is both an advantage and a hindrance, since she deals neutral damage to elemental types and is weak when being hit by dark damage.

Her personal memoria has a 13/15 cooldown rate so it won't be usable here.

"Crime and Punishment" will also draw Oriko's discs only, guaranteeing a Puella Combo and a connect for the next turn. 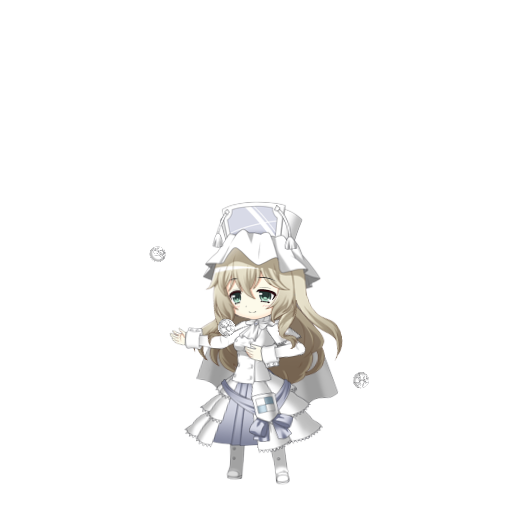 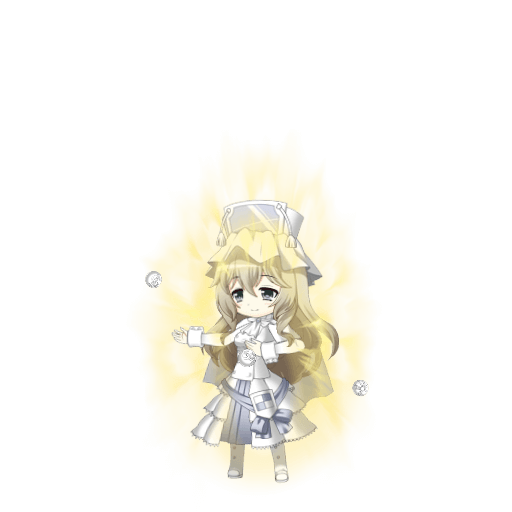 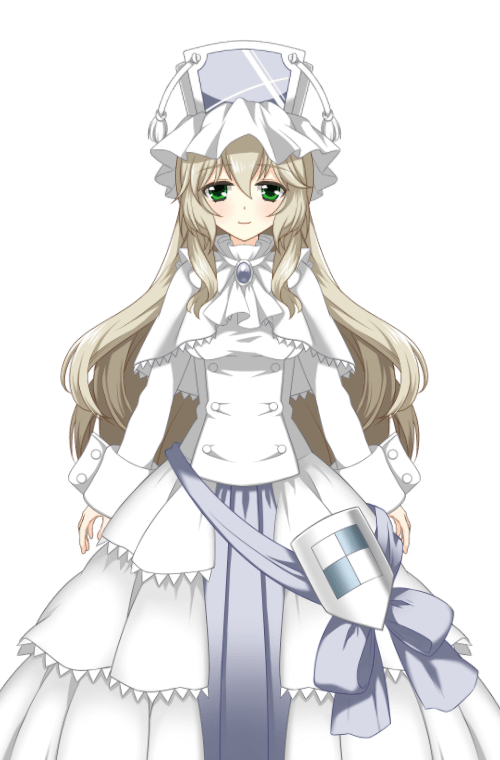 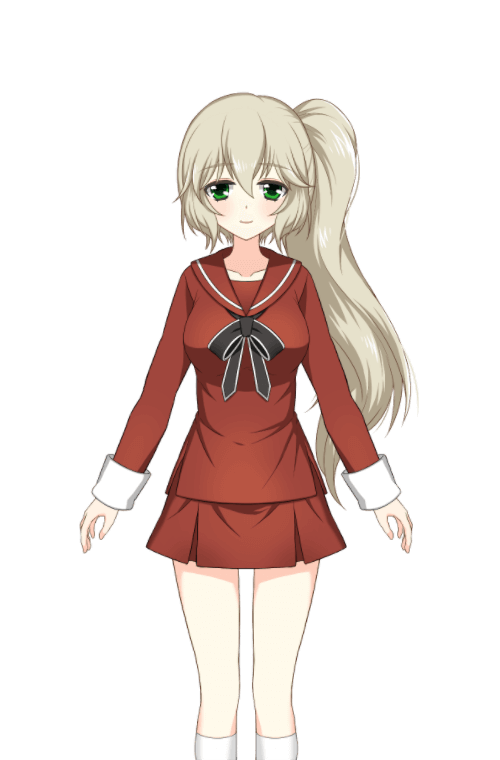 A serious yet gentle magical girl who can see into the future.

After having a vision of Madoka Kaname turning into a witch capable of destroying the earth, Oriko Mikuni asked Kirika Kure to become her pawn and help her kill Madoka before she can contract.

As she’s viewing the future, she notices that Madoka is no longer in Mitakihara, but in Kamihama and a strange distortion in time and space is occurring there that hinders Oriko’s precognitive powers. Believing Kyubey will only meddle in Kamihama, she convinces Yuma Chitose to go with her to Kamihama, explaining she saw Kyoko there in her visions and that she would need Yuma’s help.

Oriko purposefully sets a trap by hatching a witch from an overused grief seed and leaving Yuma in there as bait for Kyoko Sakura and to act as a distraction for Kyubey. She then leaves and wanders around the city only for her to be nearly defeated by a different witch. She hurries back home and awaits Kirika’s return. Kirika eventually returns, having gotten into a scuffle with Kyoko and Mami Tomoe back in Kamihama.

Kirika explains to Oriko that they don’t know what’s going on in that city either and there was an abnormally large number of witches there. Oriko decides to investigate this mysterious city further before making her final move.

Read more of Oriko on the Puella Magi Wiki.