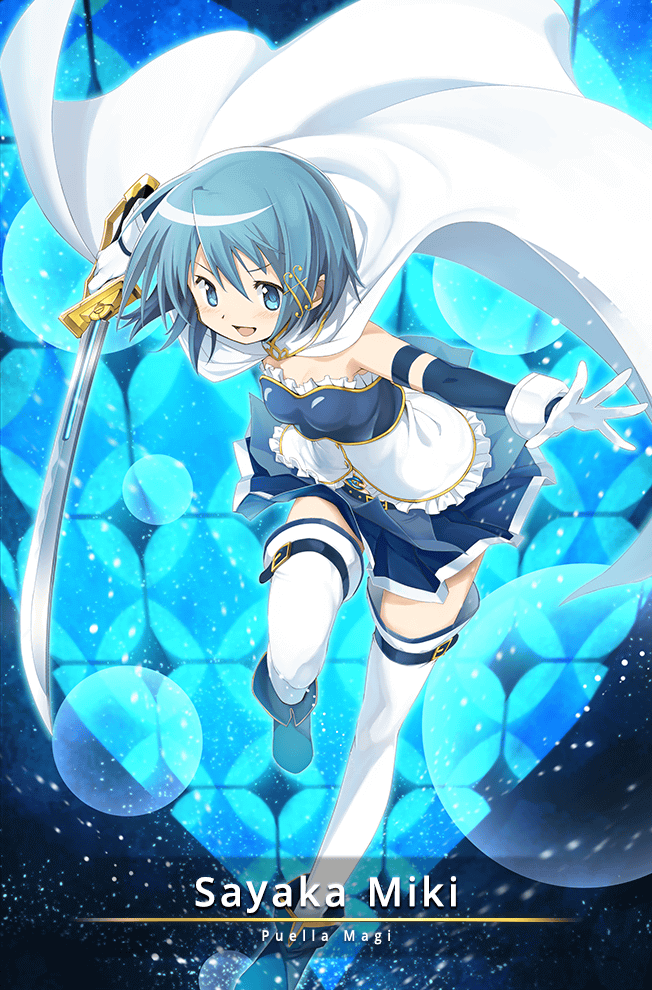 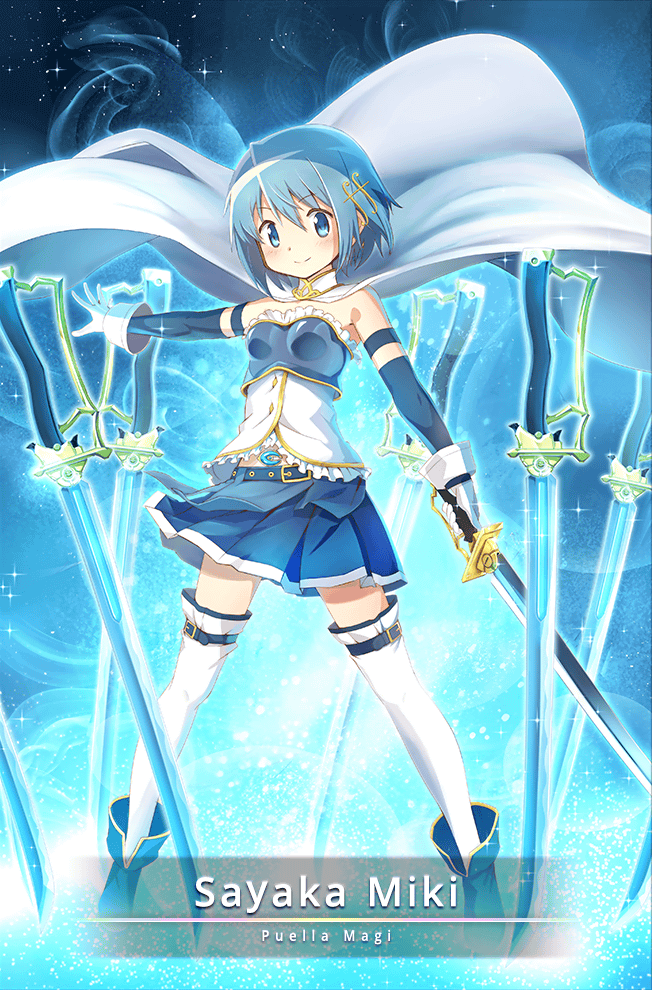 A straightforward Magical Girl with a strong sense of justice. She is a dear friend of Madoka and looks up to her Magical Girl senpai, Mami, whose fighting style of mass-conjuring weapons resembles her own. She used to visit her childhood friend Kyosuke in the hospital often. 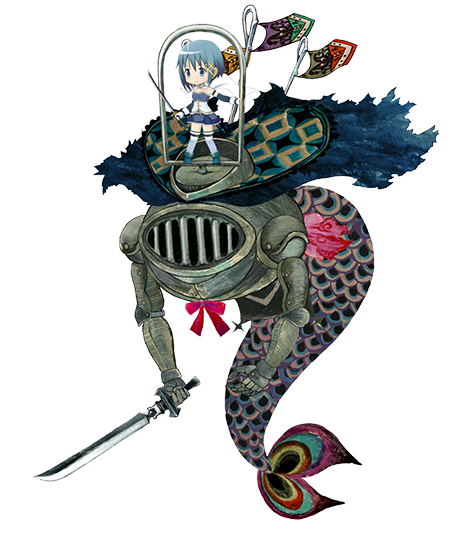 Damage Target
Doppel: Deals 1760% damage to the target.
Endure
Apply Endure (3 turns). Becomes invincible and restore 40% HP.
Critical Chance
Guranteed Critical Hits (2 turns). Critical Hits deal 2x damage.
Counter
Apply Counter (2 turns). Counterstrike deals 80% damage on the next enemy attack.
Draft & Supervision: Idea/Supervision: Gekidan InuCurry (Doroinu)
Doppel Detail (May Contain Spoiler)
The master of this emotion suffered from young love and chose a fate so harsh that she could not bear it alone. As such, the Doppel dreams of love while it swims effortlessly through the air, playing a song for its master from its vast hollow body. It can control several swords to attack its enemies with the soundwaves that emanate from its body, but as long as the master uses it, she cannot flee from the discontent that troubles her heart. 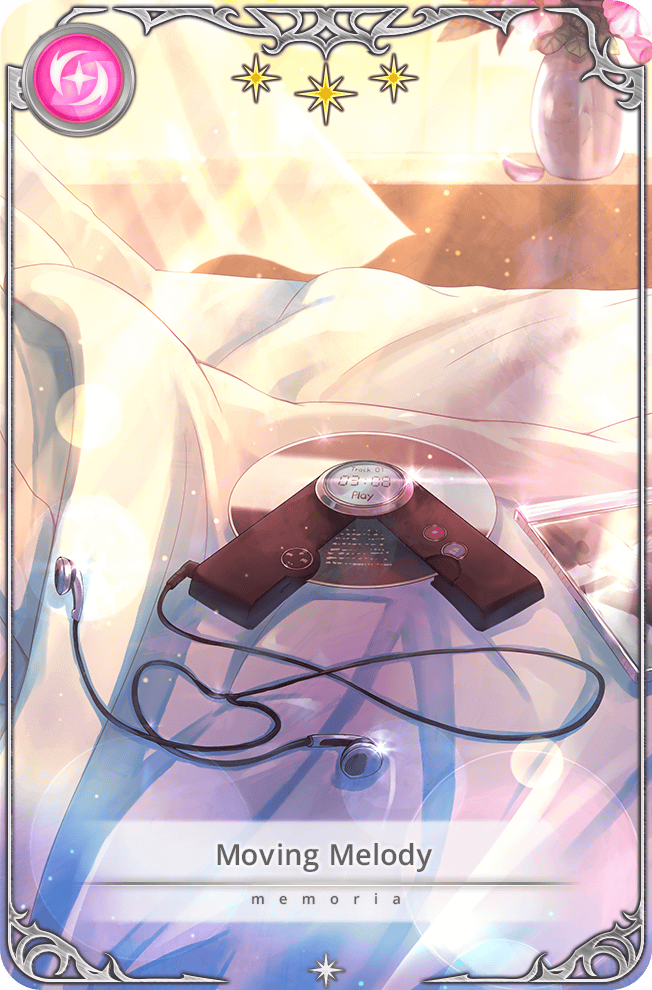 Sayaka’s Magia applies various persisting effects to herself. For two turns, She gains a guaranteed Counter effect letting her retaliate when attacked, and a guaranteed Critical effect when attacking. Furthermore, she applies Endure to herself for three turns, letting her survive lethal attacks followed by HP restoration. Sayaka becomes significantly stronger while her effects last.

Boasting a combination of high HP and Defense, Sayaka can thrive in the role of a tank by redirecting damage to herself to protect allies. While she buys time, her team can build MP which Sayaka also benefits from.

Since Sayaka’s strengths lie in her durability and persisting effects, fights that end quickly leave little room for her to contribute. She will not be the MVP of every battle, so aim to utilize her specific set of skills when the situation calls for them.

If Sayaka can survive long enough to use her Magia, she will often be able to close out the battle on her own. While the damage is only single-target, the other various benefits she receives will help her survive and dish out enough damage before they expire. Due to the fast pace of Mirrors matches, this strategy is not reliable.

Sayaka’s characteristic BACCA discs do her no favors in an environment where Blast excels.

Regenerating HP over three turns is too slow to be useful in Mirrors. This limits the usefulness of her connect to just an Attack boost, which is unimpressive when girls like Tsuruno Yui can provide an Attack buff of the same magnitude in addition to a second offensive effect.

To maximize Sayaka’s usefulness, she should be equipped with memoria which emphasize her role as a tank. Provoke, Guardian, and Counter effects are strong, as well as passive Defense Up and Damage Cut. 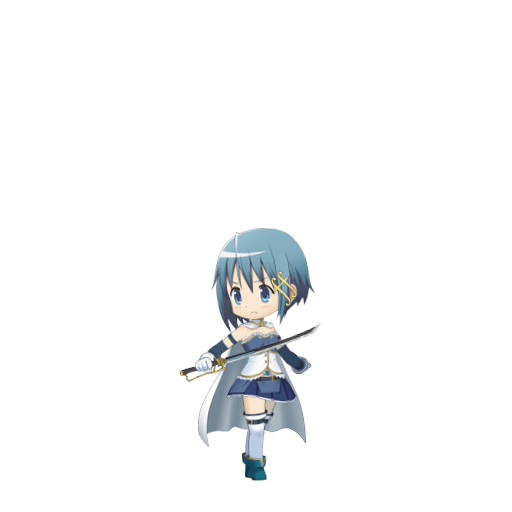 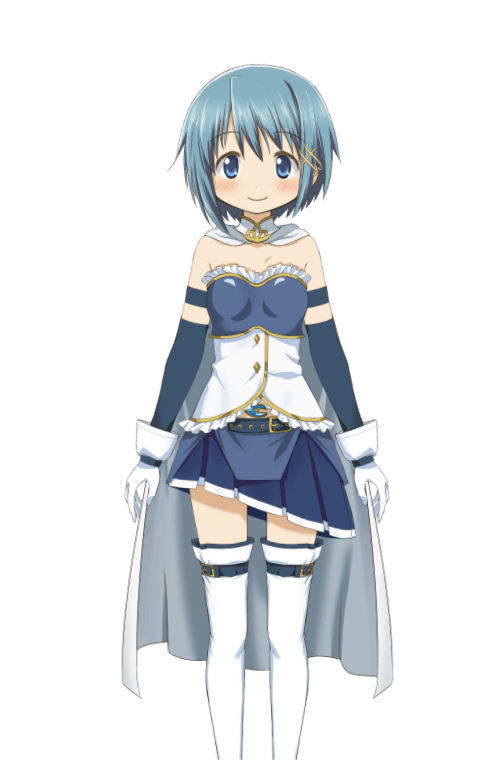 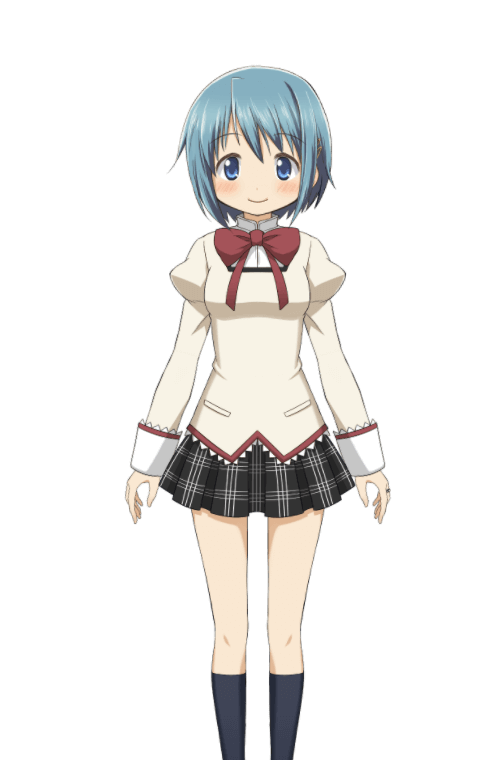 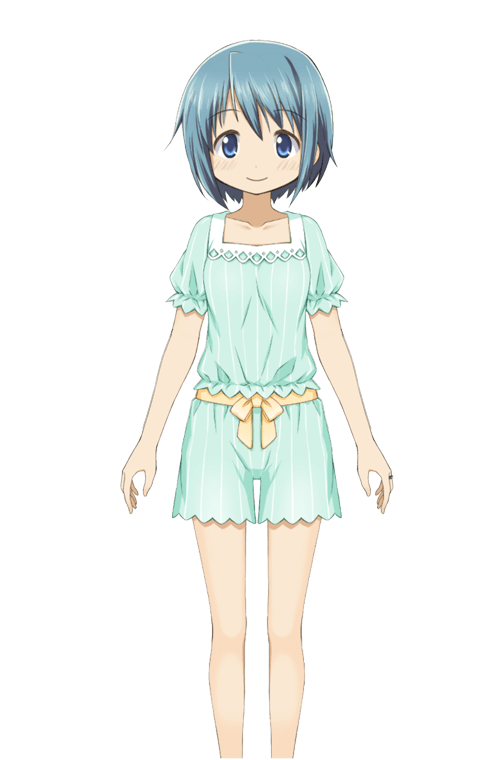 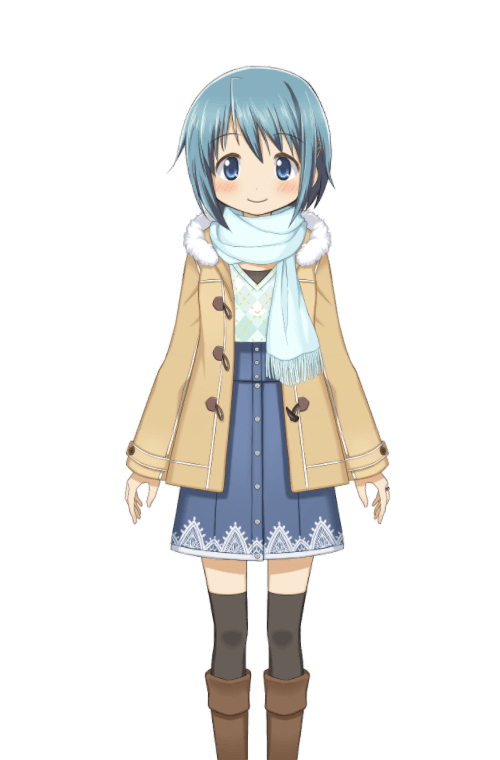 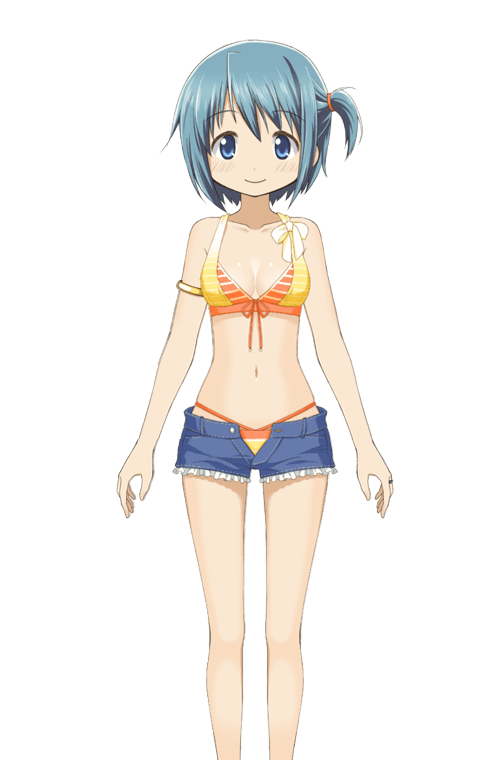 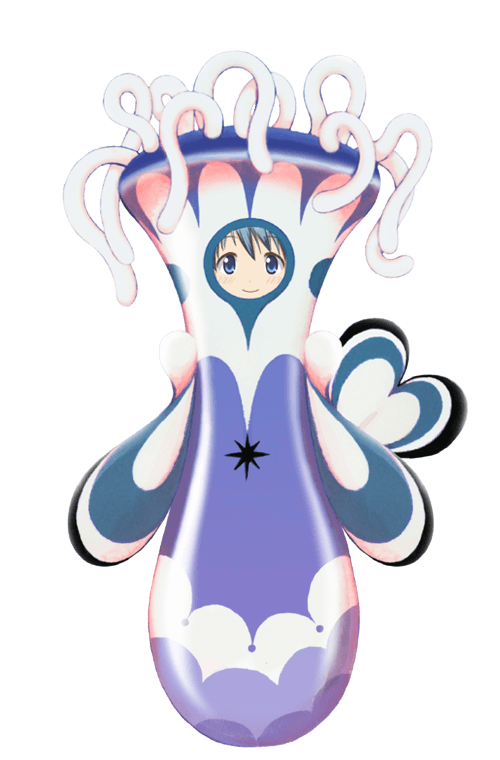 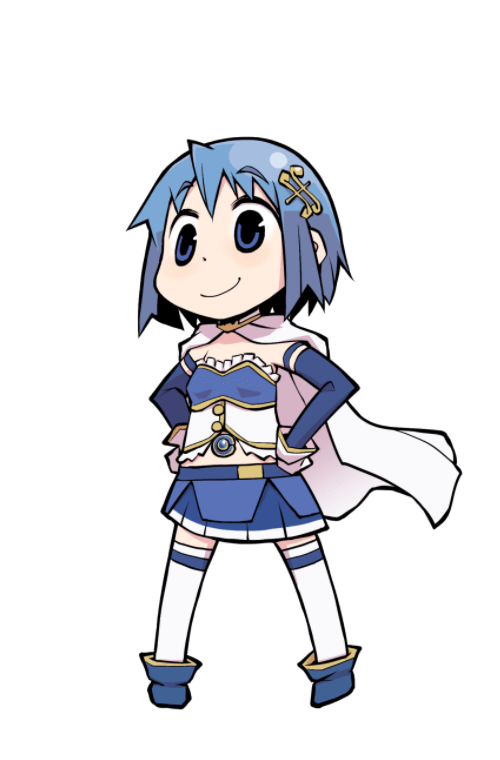 Sayaka arrived at Kamihama City to go shopping for a CD with her crush Kyousuke Kamijou. As Sayaka decides to go to Kamihama a few days early in order to go clothes shopping for her date (that she insists isn't a date), Sayaka hears a scream and takes off to investigate. The scream came from Hinano Miyako at an empty elementary school. Hinano explains something bumped her on the back of her head while she was setting up for the chemistry lab. Suspecting the culprit must be close by, Sayaka decides to become the Great Detective Sayaka and help out. After learning no one else is at the school, Sayaka asks if Hinano felt the presence of a witch. But Hinano denies this, and helps by turning off the lights and using a blacklight to find footprints that were left on the floor.

As they search around, Sayaka sees a strange mark on the floor. She follows where it leads to only to burst out laughing: it was a baseball. It seems the baseball club was outside practicing when a stray ball went through the open window and hit Hinano on the head. After returning the ball and warning them to be more careful, Sayaka decides to head back.  After asking Sayaka if she wasn't on a date, Hinano offers to use her chemicals to make Sayaka some perfume as thanks. Hinano then wishes her good luck on her date, but Sayaka insists it's not a date.

After spending some time clothes shopping, Sayaka can't seem to pick something out. Emiri Kisaki comes by, having recognized the smell of the perfume. She asks if Sayaka is clothes shopping and insists on helping pick out different accessories and wardrobes for her to try on. But Sayaka still can't seem to find anything she likes on herself. Emiri then decides to show Sayaka the perfect date spot and takes her to a place where they'll have the perfect view of Kamihama to gaze on. Sayaka thanks Emiri for the tip and heads home.

Finally the day of the not-date has arrived. After buying the CD Kyousuke was looking for, Sayaka gets a text from him saying he's running late due to the trains. Suddenly, she senses a witch and decides to fight it. As she enters the barrier, she runs into Kokoro Awane. The two defeat the witch and Sayaka gives the grief seed to Kokoro as thanks for her help. In exchange, Kokoro takes Sayaka to her favorite cafe. As they talk about their wishes, Kokoro explains how she was able to change her circumstances due to her own power, since her wish didn't come out quite how she wanted. Sayaka promises to treasure her with and believe in herself. Just then she gets another text from Kyousuke saying he'll be there soon. As she's leaving, Kokoro compliments her on the perfume she got from Hinano as Sayaka heads to the station. Sayaka has a feeling this is going to be a great day today.