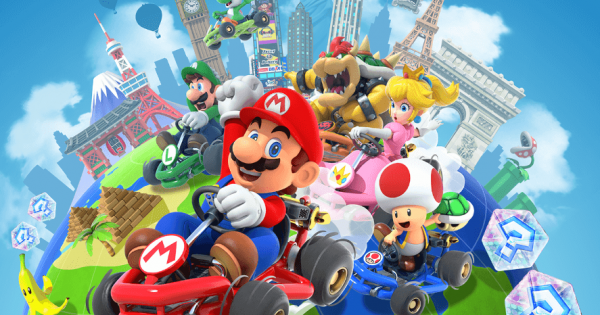 Additionally, more drivers, karts, and gliders can be added to the game in future updates. Quite a few have already been revealed in official media or appeared in the closed beta testing.

Drivers, karts, and gliders come in three rarities: Normal, Super, and High-End. The more rare the part is, the more points they give, and the more favored courses they have. High-End parts are especially rare in pipes and expensive in the Shop. In return, High-Ends give the most points and tend to have more favored courses.

Drivers on the bottom row can only get one item per Item Box. Drivers that favor that course can appear in the middle row with two items per Item Box, or the few in the top row can get three items per Item Box. Drivers with three item slots also have a chance of getting an Item Frenzy, giving them invincibility (much like the Star from or Mario Kart games) and unlimited use of one item for a few seconds. Also, drivers favor courses in the cup of their own namesake. (For example, Mario favors courses in the Mario Cup.)

Karts that favor the course on the top row have an x2 bonus points multiplier and the ones in the middle row get an x1.5 multiplier. Karts on the bottom row just have an x1 multiplier.

Every driver, kart, and glider has an amount of points they give at the start of the race. You can upgrade the points they give by either gaining experience after races or using point-boost tickets on them. Higher-rarity parts give more points. The points each part gives can be maxed out, with higher rarity parts having a higher max point cap.

Drivers, karts, and gliders have a special skill. Drivers have a special item they can get from Item Boxes, and only a few characters can use each special item. Special skills for karts will increase the time and points earned for performing actions such as Slipstreams, Rocket Starts, Mini-Turbos, Jump Boosts, and driving over Dash Panels. Gliders can increase your chances of getting certain items from Item Boxes.

Each driver, kart, and glider has a skill level. You can increase the level by unlocking duplicates from either Pipes, the Shop, or Gifts. Level-boost tickets can level up skill, too. They all start all Level 1, and be upgraded to Level 6. Levelling up drivers can increase the chance of a Frenzy Levelling up karts raises a multiplier for all bonus points earned. Levelling up gliders increases the time you have to combo. Levelling up any of the three can give a higher bonus-points boost as well.