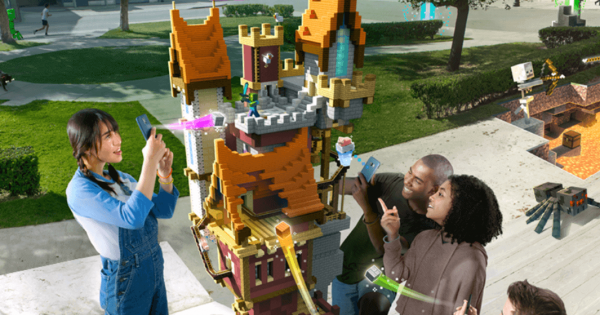 As the Minecraft Beta is now out there, we're seeing a ton of footage on YouTube of people playing the new AR Geolocation adventure game and what that looks like.

The game comes equipped with a way to model on a kitchen table what you'd like to build and to put it out there in the real world so that you can interact with it there. Much like regular Minecraft, and much like Pokemon Go or Jurassic World Alive, you must roam around the world in order to collect blocks, items, and animals to add to your inventory for use later.

Some of the gameplay videos mention that in the future there will be both a crafting system in Minecraft Earth as well as adventures (or quests) that will assist in helping people obtain some of the rarer materials (like Redstone) to assist you in doing all the insane stuff Minecraft offers up.

We can also see in the gameplay videos that there is a speed monitor (similar to things like Pokemon Go) where if you are going too fast in a car it needs you to confirm you are not driving in order to allow you to continue playing. But being a passenger in a car makes your character show up in a little Minecraft car and you can collect all sorts of blocks and chests while being driven around. It's encouraging to see this option as opposed to the Pokemon Go model - as being completely unable to ride in a car and enjoy a game makes it more challenging. The concern of course is that people will ride in cars as the chief method of collection (since you get access to a greater suite of items) but Jurassic World Alive (another AR game we cover) has allowed this for a while and it hasn't honestly posed any serious problems (and they even have extremely competitive PVP gameplay).

But the astounding thing about Minecraft Earth is how well the integration of the AR seems to function. One player built out a cool Redstone speed meter then blew it all up with TNT leaving what looked like a hundred-foot hole in the ground, and it was completely disorienting to look down that augmented reality hole and not feel like one might fall right through the grass into it.

Really, the AR integration looks great. And we are really excited to see this title come out -- especially with some of the additional features mentioned like adventures and a full crafting system.