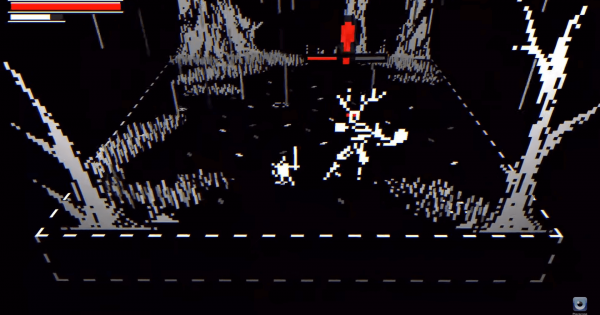 Devolver Digital has built a name for themselves over the years with some really artistic games on PC, mobile, and console. Widely known for the Serious Sam titles (their flagship series), they've created some of the most interesting mobile and PC games I've ever seen.

We recently covered Witcheye (a new game available on Android and iOS) which was a really unique take on a mobile platformer.

You've got a two tone world on a platform cross-section, a main character who is nothing more than a brilliant blob of white shaded outline holding a giant sword, and yet the combat feels so fast and intimate that it's truly shocking how they could put together these two styles. You wouldn't think an action game would look like this.

It almost reminds me of SuperHot, a first person shooter with another really innovative style.

The official trailer (below) speaks for itself.

It's really encouraging to see games like this coming on the Apple Arcade platform (a new subscription based system coming later this month) as it shows a willingness to try new things.

We'll be covering a lot of various games coming from Apple Arcade and we're excited to get our own chance to try out Bleak Sword and see if it holds up under pressure.

Keep checking back for our continued coverage on Apple Arcade or check out some of our other articles so far!