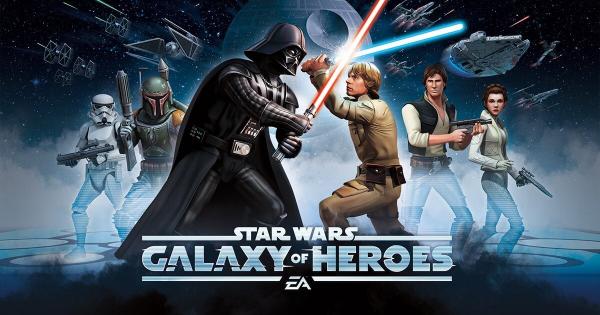 The November Event Calendar is out, and it includes the following character events: 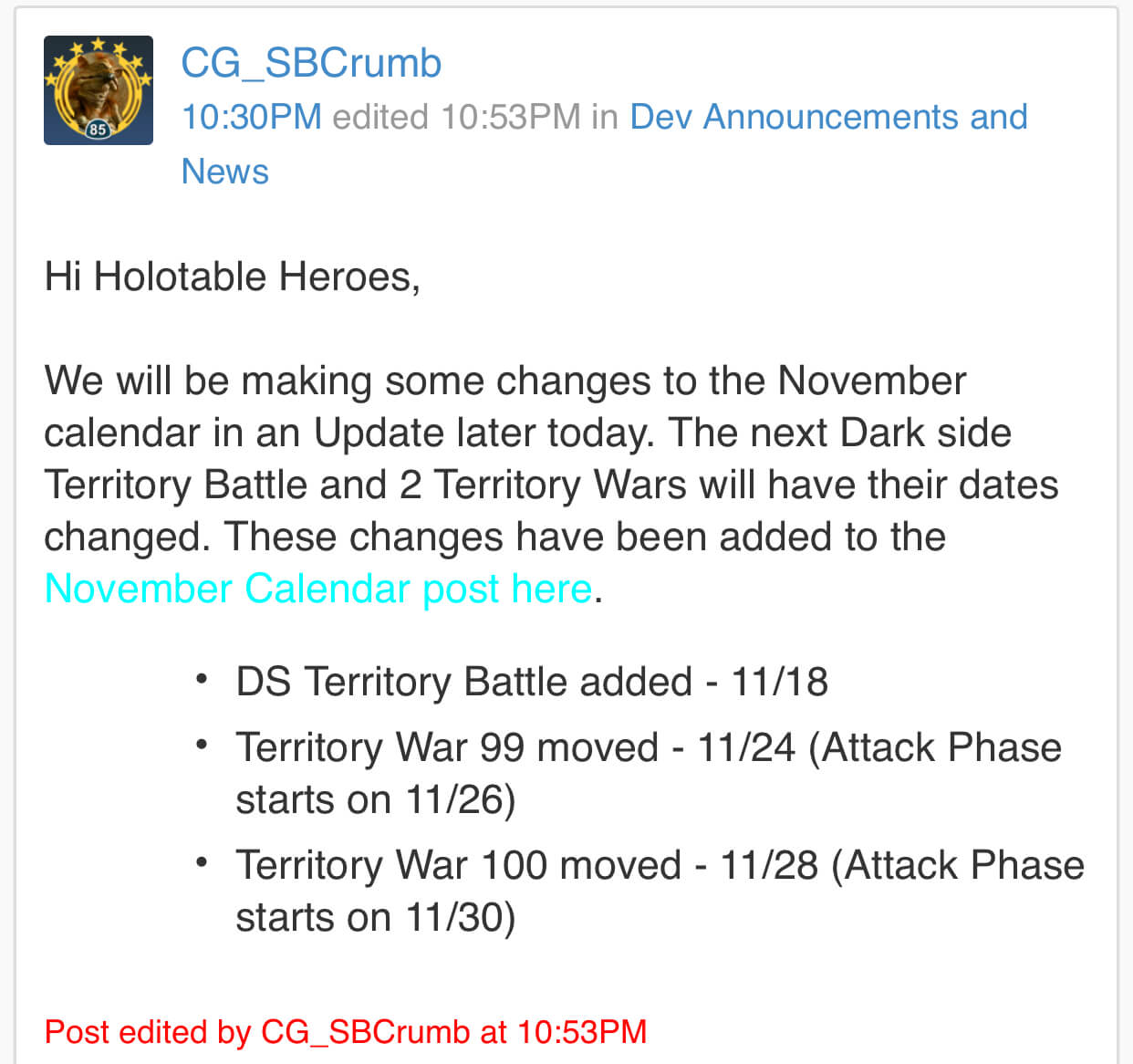 Hi Holotable Heroes and thanks for joining me again for the newest event calendar breakdown, and I hope the mini-guide for each Legendary Event helps you towards unlocking some of the games most powerful characters.  Another side note that CG said on the Galactic War Report that the Light Side Geonosis Territory Battle is expected to launch mid November, so it will likely correspond with the 11/18/2019 Rebel Assault Territory Battle.

As always all dates and events are subject to change, and any updates will be posted to the official forums at: 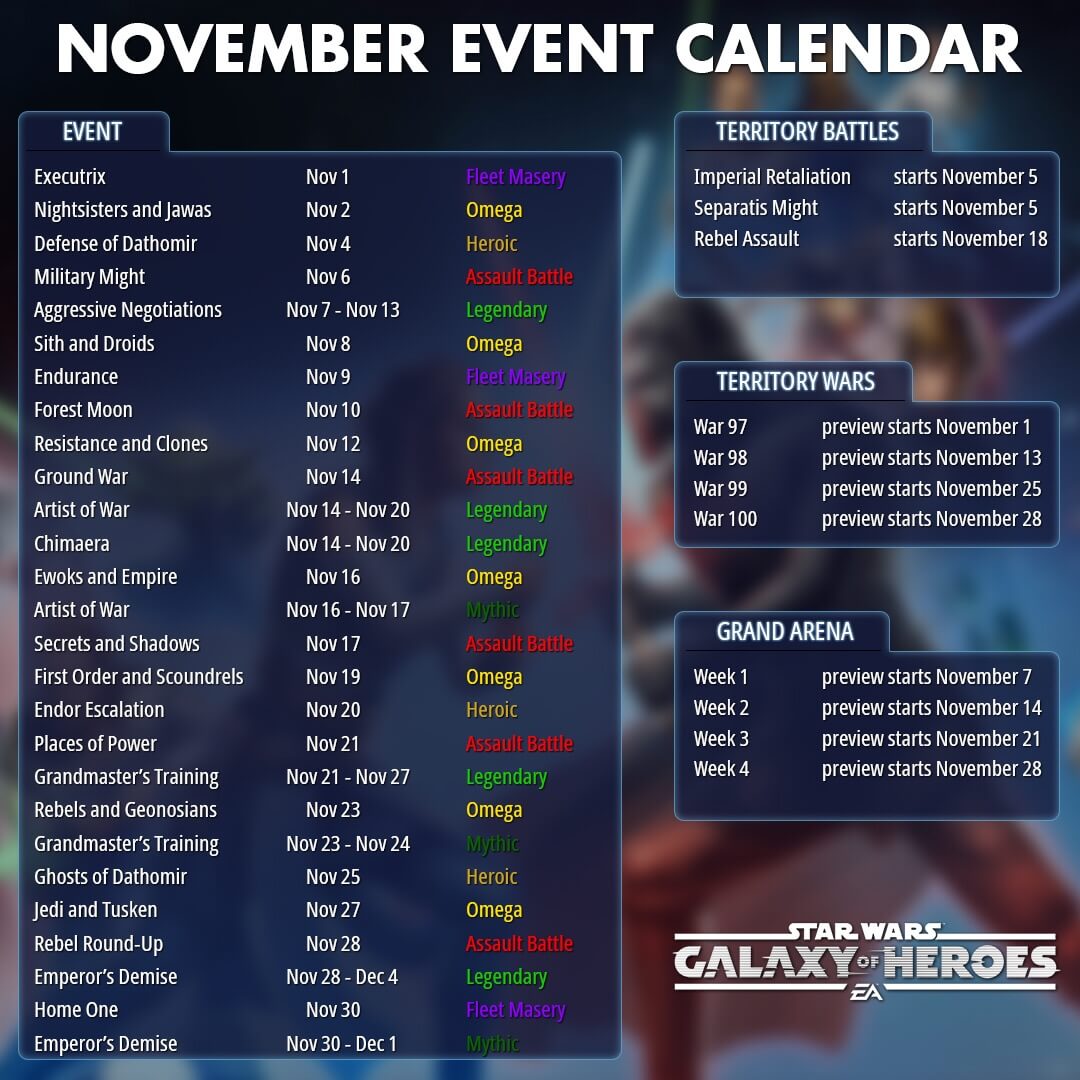 Five 7* Sepratists are required to unlock and max Padme Amidala who  is required to unlock the powerful, sand hating General Skywalker. She is a force to be reckoned with in her own right, and it is rightfully a very difficult event.

I do not recommend using B1 or Geonosians because the team gains protection up every time an opponent attacks out of turn, which B1 and Geos trigger plenty.  Watch out for Baby Shark’s revive, and stun Mace every chance you get. His shatterpoint gets out of hand. Nute lead will greatly reduce the speed of the opponents by spreading extortion all around.  It’s worth noting Asajj Ventress, Droideka, B1, Magnaguard, and B2 are required at a very high gear level to unlock General Skywalker, so utilizing as many of those characters as you can to unlock Padme will help you farm more efficiently.

I recommend Nute Lead, Droideka, B2, Magnaguard, and (Dooku or Asajj or General Grevious).

The counter-meta centerpiece and all around great plug and play character, Grand Admiral Thrawn, requires Five 7* Phoenix One to unlock and max.  You can also unlock and max his Capital Ship with Five 7* Rebel Ships that must Include the Phoenix One ships: Phantom II and Ghost.

Put Phantom II in reinforcement to reduce the cooldown on reinforce by 1 when he enters the battlefield.

The first Legendary Event ever released and by far the easiest is an event that will require little thought and preparation with Bastilla Lead Jedi. Grandmaster Yoda, though lackluster at release, has been reworked and fits very well with newer characters such as Jedi Knight Revan and Padme Amidala.

Recommended Team: Bastilla Lead and Four of the following:

Most Powerful and Most Inaccessible:

Use in other Events:

Grandmaster Yoda is the only character.

Recommended Team: Phoenix One for efficiency reasons since they are required for Thrawn as well, but if you just happen to have a CLS team laying around, that will certainly dominate the event. Hera, Ezra, Kanan, Chopper, and Zeb.