OPINION: An Optimistic Take on General Skywalker and His Event Star Wars: Galaxy of Heroes 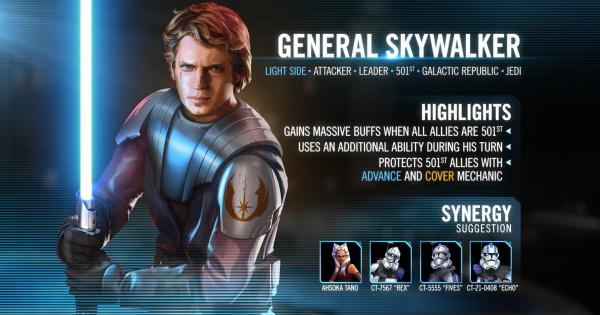 An optimistic take on General Skywalker's impact on Star Wars: Galaxy of Heroes in meta performance, expected unlock rates of Epic Confrontations, and in characters that are required to unlock.

- General Skywalker's Meta Performance is strong enough to chase, but still beatable by counters that, while effective, will lose banners in GAC.

- General Skywalker's Unlock Rate is much lower than the player base anticipated, but this might be a good thing for F2P and low spenders who wouldn't have unlocked him anyway.

- General Skywalker's required characters to unlock are all fantastic high demand characters that are a refreshing contrast to farming the Vet's and Farmboy Luke.

While the General Skywalker event wasn’t well received, I believe there were several positives of the event that deserve to be acknowledged.  More than that, I believe that the General Skywalker event was a strong step in the right direction by Capital Games. I realize the gut punch to hoarders everywhere was tough to take, but we also know CG openly said they would be working towards shifting content in a way that discourages hoarding.  I wish someone would tell them that should apply to GET currency as well-- I don’t think the game is perfect, and I am highly critical of using GET currency to farm toons at all, but overall, I believe that General Skywalker is a huge step in the right direction by providing a smoother meta shift,by providing a small number of unlocks to limit the feel bad of not having him, and by utilizing only high demand toons to unlock General Skywalker.

From an arena/GAC standpoint he’s a clear advantage, but he’s still beatable.  You’ll lose banners using a soft counter on him, but with the right strategy, you can work around that.  That’s exactly what I could hope for from any meta shift. You don’t want the new character to be equal or weaker because then he isn’t worth chasing, but you also don’t want the new character to be an insurmountable gate no one can cross no matter how disciplined or well tuned your squad is. It makes for better gameplay when the new best team is a cut above but not a hard requirement to enjoying the game.

As an aside, for the purposes of this article, a soft counter is a counter that may not succeed, requires stronger mods and/or gear to succeed, or is a counter with a high likelihood of losing several banners.  We have a guide for the current soft counters to General Skywalker, which you can find here:

General Skywalker is quite strong, almost impossible to get 60+ banners on even in a mirror match, nonetheless several soft counters, outlined in the article above, exist for the team, which gives F2P and low spenders who didn’t get General Skywalker a fighting chance to make up for the lost advantage.  If you have General Skywalker, you can breathe a little bit easier in your matchups, but if you don’t and you’re matched against a player with him, you have a chance with tight enough gameplay and a strong enough roster to earn that win anyway. General Skywalker is probably the smoothest meta transition in the entirety of the game with the most soft counters available at release, and relics may provide even more as more teams are tried and tested.

One of the biggest complaints from the fanbase was how hard it was to unlock General Skywalker utilizing high gear requirements AND more characters required to unlock him than any event previous to him, but I think of this as a selling point of the event. This is fantastic news to F2Pers everywhere, as there are less General Skywalkers running around to contend with.  The Darth Revan days was an otherworldly ordeal for everyone who didn’t have him precisely because of how many more were unlocked. Darth Revan warped the meta far more than General Skywalker in part thanks to this more difficult requirement to unlock him, and this is something I’m perplexed doesn’t excite more players. I absolutely like to see low first time unlocks of event characters purely because it makes a smoother game experience for the majority of the community.

He’s not just harder to unlock though, the characters required in the event are fantastic characters with uses across multiple game modes.  Compared to CLS and JTR, this is a clear step in the right direction in using toons that won’t collect dust in a players roster. The vets were never useful unless your name is Clash, but Padme, Separatist Droids, and Galactic Republic are the teams your guild wants you to farm already.  Adding an extra incentive to farm these fantastic teams is a great move in the right direction. When was the last time you used your Farmboy Luke Skywalker? Put your hand down Clash. While most players would look at farming General Skwyalker in terms of three months or even six months, is that so bad? I like the aspect of the game that involves long term planning and preparation. I don’t even want to unlock any character the first time around-- I want it to be ok not to unlock a character the first time around, and General Skywalker tells me it’s ok to wait.  In the meantime, I’ll get plenty of use out of that Padme team I’m farming in GAC, My Sepratists Droids will get my guild some sweet, sweet GET2 currency, and my Galactic Republic ships will help me gain some fleet ranks. All of these characters are characters I wanted to farm before the event anyway-- I’m thrilled I have even more incentive to farm them.

While I can appreciate the fatigue of having six character events that require strong characters debuting this year, I hope players can appreciate the things that Capital Games did right with the General Skywalker event.  I hope that they reconsider utilizing GET to farm characters, or make the gear almost exclusive to that shop more accessible in other places; especially stun guns. However, despite this fatigue and the high tide of gear scarcity we’re in, I hope that we can appreciate General Skywalker’s positive impact on the game.  I won’t see confronting a GenSky in GAC as the death nail that I used to see JKR or DR before I had them, but I still want to chase him. That’s the exact happy medium any game developer could possibly want to strike. I hope as everyone struggles through the new G13 and relics that accompanied it don’t lose hope, and while I know some won’t agree,  I hope you enjoyed my take on the current state of the game as it relates to GenSky.