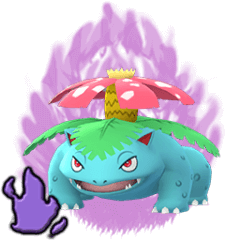 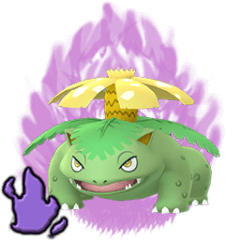 Vine Whip is the preferred fast move for Venusaur due to greater energy generation, which allows Venusaur to take advantage of its powerful charge moves. Razor Leaf is a more polarizing fast move that focuses on dealing damage without requiring energy or being denied by shields, though its slow energy generation causes Venusaur to lose some neutral matchups.

Frenzy Plant is the main selling feature of Venusaur, with an insane 2.22 DPE (Damage Per Energy) and moderate energy cost. If you don't have access to Frenzy Plant, consider Ivysaur with Power Whip instead. Sludge Bomb is a nice STAB coverage move that also gives it an advantage against other Grass-type picks.

Venusaur is a solid pick for PvP whose claim to fame is mostly due to Frenzy Plant. While its stat distribution doesn't result in spectacular bulk, it's still considerably tankier than some other Grass picks such as Victreebel or Sceptile, in addition to having a Poison-typing that gives it the edge against fellow Grass like Meganium. Overall a very good candidate for PvP in general, with numerous wins against popular meta picks.

While Venusaur loses against Giratina in a direct fight, it does manage to get wins off many classic counters to Giratina, which includes Umbreon, Snorlax, Lapras, and Fairy-type "Charmers". Its main issue compared to Meganium is the fact that it doesn't have any hit on Registeel.

Venusaur lacks the stats needed to compete well in Master League. Interestingly enough, as long as Venusaur has 1 shield it can still win against a few powerhouses in Master League, such as Kyogre, Groudon, Raikou, Tyranitar, and Swampert. Since Master League also consists of many Dragon-types which resist Grass, Venusaur might not be the best pick though.