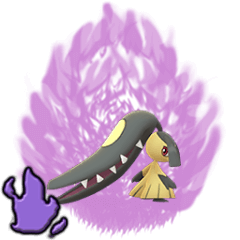 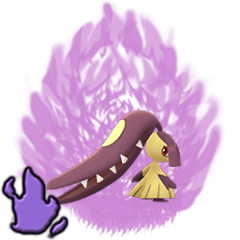 Shadow Mawile has an absolutely outstanding typing for Dragon Type raids... and that's about it. Its performance is simply too lackluster to warrant the large investment.

Fire Fang and Ice Fang have identical stats and cover different typings, with Fire Fang more favorable vs Steel-types, and Ice Fang being slightly more favorable against Mawile's weakness to Ground-types, in addition to hard-countering Dragons. Bite is a bit inferior now due to its slightly worse energy gains in comparison, but its typing can still be valuable in certain formats.

Power-Up Punch is preferred for its low energy cost which lets Mawile bait shields, in addition to its stat-boosting mechanics. Play Rough provides Mawile the invaluable fairy STAB that it needs to perform its main function as a dragon-slayer, while Iron Head charges faster and provides a secondary STAB. Vice Grip is a bad move.

Mawile... exists... in the Great League. When using its Fairy STAB in conjunction with its huge triple resistance to Dragon type moves, not to mention its plethora of other resistances, it can potentially act as a highly effective counter to Pokemon such as Altaria, Dragonite, Dragonair, and even Deoxys-D. The September 2019 rebalance gave Mawile additional tools in its moveset which lets it perform even better, most notably being able to defeat every Dragon-type eligible in Great League in almost all even shielding scenarios. Unspectacular bulk however, holds Mawile back from being more viable in the meta. Below average energy gains also limit Mawile's overall threat, and makes shield-baiting almost a necessity if it ever hopes to land its hard-hitting charge moves.

Mawile has a max CP of 1634 which is unviable in the Ultra League.

Mawile is unviable in the Master League.

Returning player lost in pvp
Hello there ! I’ve just gotten back into pogo, and i’m lost with pvp IV and pokemon…
Shinx Community Day
Looks almost certain according to Leekduck, the move will doubtless be a PvP one…
Yamask / Cofagrius ... will it live up to the hype?
I wanted to ask the PVP gurus out there if they think Yamask / Cofagrius will live up…
1500 and below or above Empoleon
So I have enough candy to evolve my 3 star 439 Piplup… should I evolve it and have a…
Worst Research Ever
It took me 5 minutes to complete the latest instalment of the Misunderstood Mischief …
Read More