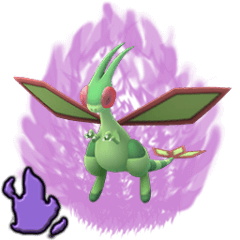 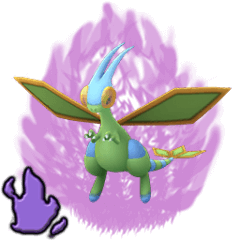 Shadow Flygon is an offensive improvement compared to its non-Shadow variant, but as more Pokemon gain Shadow variants Shadow Flygon will be left in the dust again. On defense its double weakness to Ice-type attacks does it no favors. In short: it's a strict down-grade to Garchomp.

Dragon Claw sees a lot of use on Flygon, which is often used to apply heavy shield pressure and bait shields. Though its base power of 50 and 1.4 DPE (Damage Per Energy) isn't anything spectacular, the frequency of which it can be used is noticeable. Dragon-type opponents also dislike being abused by constant Dragon Claw spam.

Even though Earthquake requires a lot of energy, it is desired due to its high STAB damage and wide coverage. With 1.8 DPE (Damage Per Energy) and 120 base power, Earthquake has the potential to deal huge damage to the opponent if it's unshielded (and if the opponent doesn't fly). Stone Edge adds coverage to Flygon and helps deal with its double weakness to Ice-type Pokemon, in addition to common Flying-types.

Earth Power, Flygon's Community Day special move, has 1.63 DPE (Damage Per Energy), with a base power of 90. This makes it faster, but weaker than Earthquake. It is a perfectly acceptable substitute to any Earthquake moveset, with the main difference being that it tends to be better early-game, when shields are still up.

Flygon competes with other Ground-type and Dragon-type Pokemon in Great League, but due to its offensive stat distribution, falls significantly behind in bulk with a 1500 CP cap. Flygon makes up for this by being one of the fastest spammers in the game, applying heavy shield pressure thanks to the massive energy generation from Mud Shot and low energy cost Dragon Claws. Relatively quick access to the powerful Earthquake and Stone Edge moves enables Flygon to threaten numerous Pokemon with a potential KO if unshielded. Thanks to its moveset, Flygon is one of the best Pokemon at baiting or forcing shields, and almost always leaves a bruise on its opponent before going down. Just keep this guy away from Ice-types.

Flygon moves up in the ranks in Ultra League thanks to a higher CP cap. Just like in Great League, Flygon's main role is applying heavy shield pressure with Dragon Claw spam, and threatening fast Earthquakes or Stone Edges. Flygon still has a big issue with Ice-types in this league, and also loses to the big names like Giratina, Lugia, Dialga, and Cresselia, but not without putting up a fight.

Master League paves the way for a lot of legendary Pokemon due to their high stats, which leaves Flygon somewhat behind.